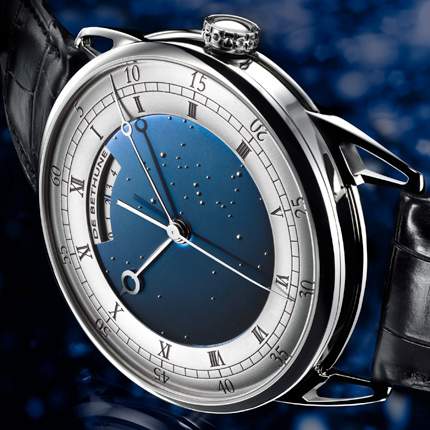 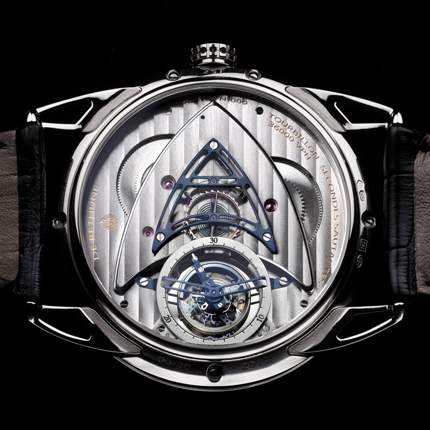 De Bethune revisits the tourbillon as an authentic wristworn regulator, an “historical” breakthrough in the evolution of mechanical watches, endowed with genuine emotional appeal.

The finest way of paying tribute to authentic traditions is by transcending them. De Bethune reinvents the spirit of the tourbillon in a manner such as Abraham-Louis Breguet may have dreamed of, but by taking it to a level of aesthetic and technical incandescence that goes well beyond the known limits of horological kinetics.

A word of technical explication: Abraham-Louis Breguet devised the tourbillon mechanism in order to create a dynamic kind of escapement that was lacking because of the static manner in which pocket-watches and marine chronometers were worn in a waistcoat or placed on the deck of a ship. Wristwatches enjoy a far more active life, which subjects watch movements to chaotic displacements and energy transfers that bear no comparison with those experienced by historical pocket-watches.

De Bethune thus undertook to rethink the tourbillon around this new wristwatch dynamic. The laws of physics are implacable: in order to compensate for the disorganised violence of wrist movements, the carriage must be as light as possible with as high a frequency as possible and a maximum rotation speed for a minimum mass and inertia. Thanks to new technologies, De Bethune has therefore created a 0.18 g silicon-titanium tourbillon in a carriage spinning once every thirty seconds at its axis, and a balance oscillating at a frequency of 36,000 vibrations per hour. This tourbillon is the lightest on the market (classic counterparts weigh four times as much) and comprises 50 parts, of which the lightest weighs less than 0.0001 grams and the “heaviest” 0.0276 grams!

Denis Flageollet, the brand's watch designer, wished to revived the traditions of the golden age of horology by endowing this movement with the soul and the majesty of the grand historical regulators or yesteryear. The choice of “jumping seconds” was a natural means of marking off time in noble style. He therefore created, in the style of the regulator timepieces created by the greatest master-watchmakers of the past, a seconds display at the centre of the watch, along with a double lever with four pallets to orchestrate the gold double wheel of this “jumping seconds” display. The result is an impressive mechanical ballet that is rendered technically feasible by the use of new technologies, and which is bound to move the hearts and minds of all devotees of classic mechanical watchmaking. The pared-down formal approach to the components features simplicity where needed and complexity where due. The light, airy style is undergirded by deeply thought-out ideas. The fascinating gyration of the tourbillon carriage is matched by the steady, ample beat of the seconds. This model epitomises the very foundations of horological emotions and a form of absolute and uncompromising beauty.

This masterpiece is revealed only on the back of the watch, to genuine connoisseurs capable of comprehending its passionately subtle features, and also of appreciating the inner power and beauty of the fired-blue hand-crafted titanium dial studded with golden stars like the night sky, along with the evocation of the most famous 18th century clocks through the hour and minute ring in a sterling silver that is destined to acquire a sublime patina over the years.