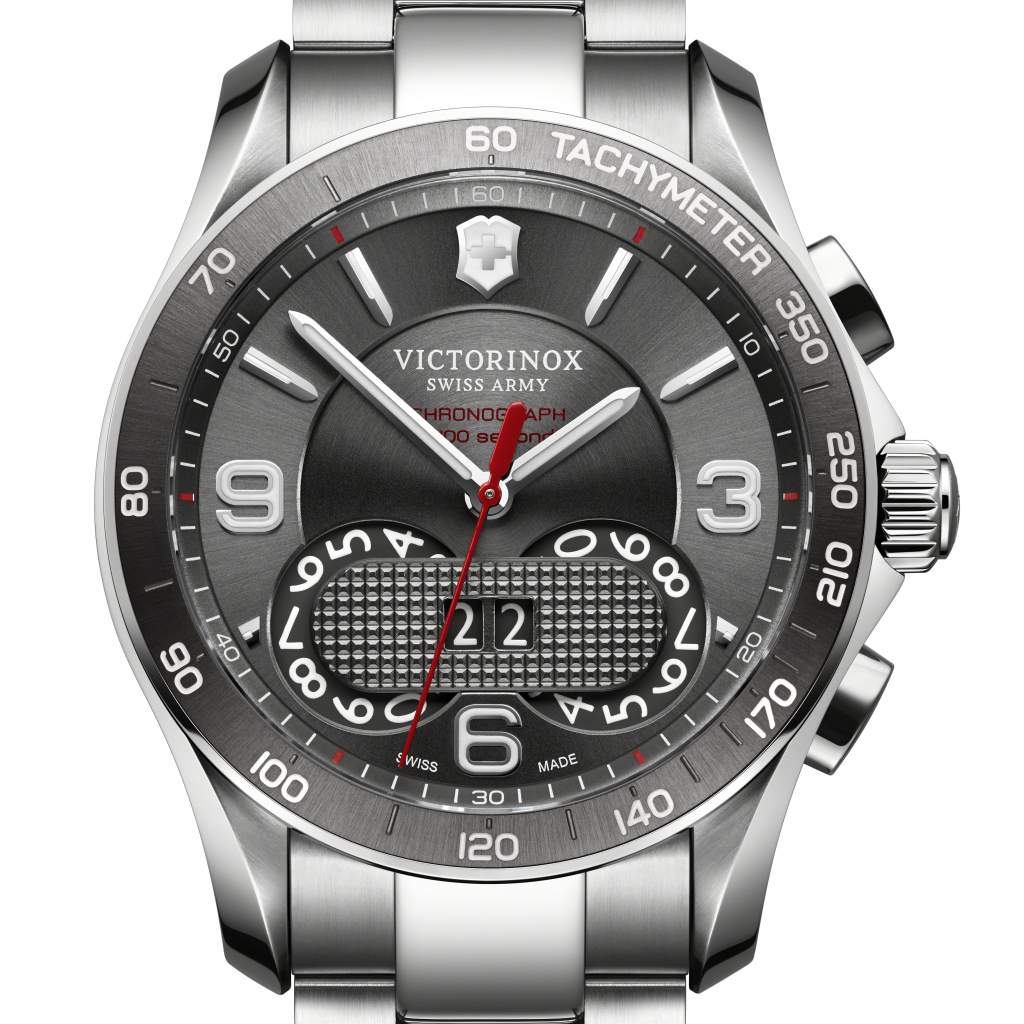 The Chrono Classic will most certainly be the standout star of Victorinox Swiss Army’s exciting lineup for 2013. The newest version of this perennial best-seller has undergone a full metamorphosis, both aesthetically and technically. First and foremost, its new quartz movement transforms it, with a double press of the crown, from a classic watch into a chronograph accurate to 1/100th of a second. In a first for this type of movement, the 1/100th of a second is displayed numerically, by means of two rotating discs. Two new dial colours complete the transfiguration of the Chrono Classic into a genuine multi-tasking tool of sober styling and intelligent functionality.
The Chrono Classic continues to evolve but remains faithful to its genetic code. The dimensions and lines that have made it one of the brand’s bestsellers are still in place; we recognize at first glance the fluid forms of its case and elegantly designed horns, and the oblong buttons on both sides of the crown. However, a radical transformation has taken place at the very heart of the watch, and in the way it performs its many functions. The Chrono Classic is now a "three-way" watch, an innovative tool of sober design, as simple to use as the famous Swiss Army knife that inspired it.
By simply pressing the crown twice, the classic watch turns into a chronograph accurate to 1/100th of a second. That simple gesture realigns the three central hands at 12 o’clock, while the date indicator at 6 o'clock becomes a counter at zero position. To start the chronograph, in the traditional manner, simply press the button at 2 o'clock. The red central hand then displays the seconds, while the others count out the minutes and hours. The same operation stops the time measurement--the 1/100th of a second shows in the window at 6 o'clock. A second pushbutton at 4 o’clock resets the chronograph.
The technical prowess of the Chrono Classic does not stop there. You can go back to the normal way of reading time even while the stopwatch is running. A double-click on the crown and “voilà”. Simple and ingenious, the mechanism is a feature of the chronograph’s Swiss Made FM13D quartz movement by Soprod, with whom Victorinox Swiss Army worked closely to develop the watch.
The 1/100th of a second’s numerical display--by means of two rotary discs arranged on the lower portion of the dial--is truly novel, representing, for this type of movement, nothing short of a world first, both technically and aesthetically. The large date, a perpetual calendar, is also a first for the movement.
The guilloché decoration on both discs, a clear reference to the shape and casing of the Swiss Army Officer’s Knife, is a tribute to the origins and values of the Victorinox brand. The discs’ rotation corresponds to those of the knife’s folding blades. Other stylistic elements echo the famous multi-purpose tool, such as the indexes and the counterweight of the red central second hand. With its ease of use, the knife has become an icon. Inspired by this philosophy and functionality, this model is sure to become an icon of simplicity.
These numerous winks to the past do not preclude a daring modernity: The Chrono Classic this year comes with dials and bezels in original monochrome colours. The two colour options are
nuanced in very different ways: for a stronger sporty style, "dark grey" (“Black Ice” PVD) with a black leather strap (biologically tanned) or metal bracelet; or, for a more urban and audacious look, champagne (gold PVD) with a brown leather strap or metal bracelet. Among these four models, there is definitely one that is destined to become your companion for life!