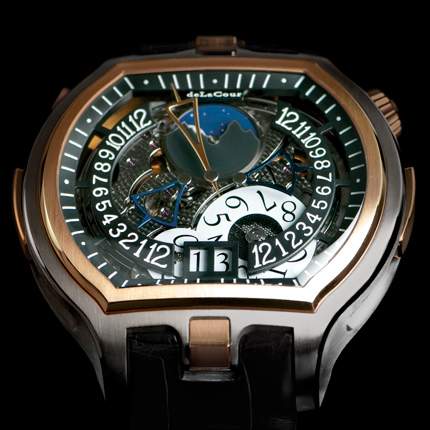 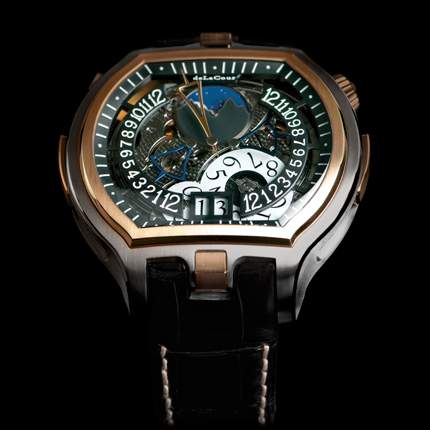 In an age when electricity was unknown and luminous hands were not yet invented,it was useful to hear the time instead of searching in the dark. The minute repeater is acomplex and entirely mechanical system which strikes only on demand, the hours, quartersand minutes indicated by the hands.

The world may never have revelled in the delights of the repeater watch had historyfollowed a course of logic, rather than a the fascination for the mechanical wonder that is the repeating watch movement.

Following in the footstep of great watchmakers deLaCour presents their firstminute repeater: the Birepetition. This timekeeper presents an exceptional and never seenbefore feature, a striking mechanism not only for one but two time zones.

Having collaborated with Christophe Claret in the past on models such as theBitourbillon, deLaCour chief designer Pierre Koukjian has joined forces once more withthis complication specialist to create a world premier.

The patented calibre, DC288 (protected under patent EP 1 770 453)  enables adouble time zone reading, a retrograde hand placed at 9 O'clock indicates the home timewhilst the Greenwich Mean time is displayed by a second retrograde hand placed at 3O'clock. A third concentric hand is used to indicate the minutes. The date is displayedthrough an aperture of two rotating disks for double digits. To complete the Birepetition'sstunning dial, a star shoots across the moon phase display every six minutes.

The mechanism strikes the hours, quarters and minutes on demand, on gongs of low andhigh pitch specific to each time zone. These gongs are struck by two hammers (hours and minutes) that go round the movement twice in order to produce sonorities of greater resonance.

One hammer strikes the hours (the hammer differs according to the chosen timezone) whilst a second hammer strikes the minutes (different pitch to the hours but the samepitch for both time zones) and alternating strikes of these 2 hammers create the sound forthe quarters:  a sophisticated symphony reserved for the music of time.