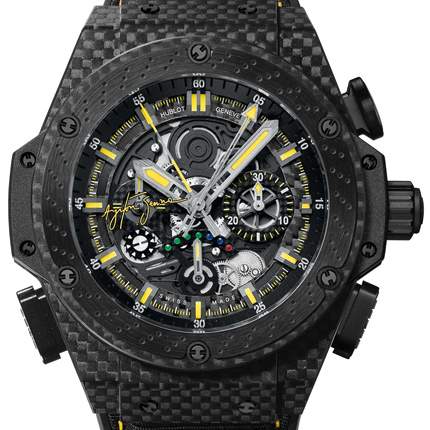 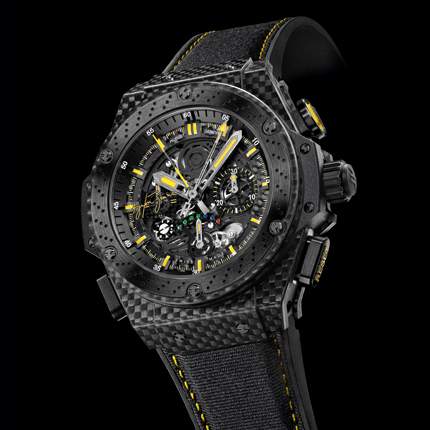 After the phenomenal success of the first Big Bang Senna launched in 2007 and the Big Bang Senna Foudroyante presented in Tokyo in 2009, the week-end of the São Paulo Grand Prix , and in the year of what would have been the driver's 50th birthday - Viviane Senna and the Instituto Ayrton Senna hosted a special event on the 3rd of November,2010 which provided the backdrop for Hublot's unveiling of the King Power Ayrton Senna, a limited edition of just 500 numbered timepieces with a part of the proceeds going directly to the Instituto Ayrton Senna.

Refined and powerful, made from an array of high-tech materials used in Formula 1 , some of which - like Nomex - have never before been used in watchmaking, the King Power Ayrton Senna is a split second chronograph with power reserve indicator.

It is the first time that this piece has been created in an "Aero" version, which allows the watch's movement and motor to be admired through a skilfully open-worked dial. In addition to Ayrton Senna's signature, displayed as a yellow transfer on the sapphire crystal of the dial at 9 o'clock (the same yellow which dominates the Brazilian flag), the piece includes a wealth of high-tech details directly inspired by Formula 1.

The complex creation of a case made entirely from carbon fiber (a material widely used in Formula 1, a first for Hublot), a ceramic bezel with a circular-grained satin finish adorned with multiple holes to represent an F1 , brake disk, also in ceramic, a strap made from Nomex, a synthetic fibre developed by Dupont De Nemours and used – thanks to its very low combustibility and thermostability - to make the suits worn by F1 , drivers. The power reserve indicator at 6 o'clock in green, blue and red to evoke the timers used in Formula 1 , the Start, Reset and Split push buttons, the latter for the split second function and a 30-minute counter at 3 o'clock.

Finally, on the back of the piece, laser engraved with yellow infill for the engraved text, the transfer portrait of Ayrton Senna is emblazoned on the sapphire case-back. The watch comes in a special Hublot presentation case, made from black ebony with a sapphire glass window decorated with a transfer of Ayrton Senna's signature in yellow, matching the one on the sapphire crystal of the watch's dial.

What is the split second function? This allows split times to be measured using two chronograph direct-drive hands. To measure a time, the first "split second" hand is stopped, while the second continues to run. This mechanism allows time to be taken to check this first period, before the push-button is activated again, allowing the hand to catch up with the directdrive hand. This function can be used to calculate the split times of a racer, or the times of two racers.