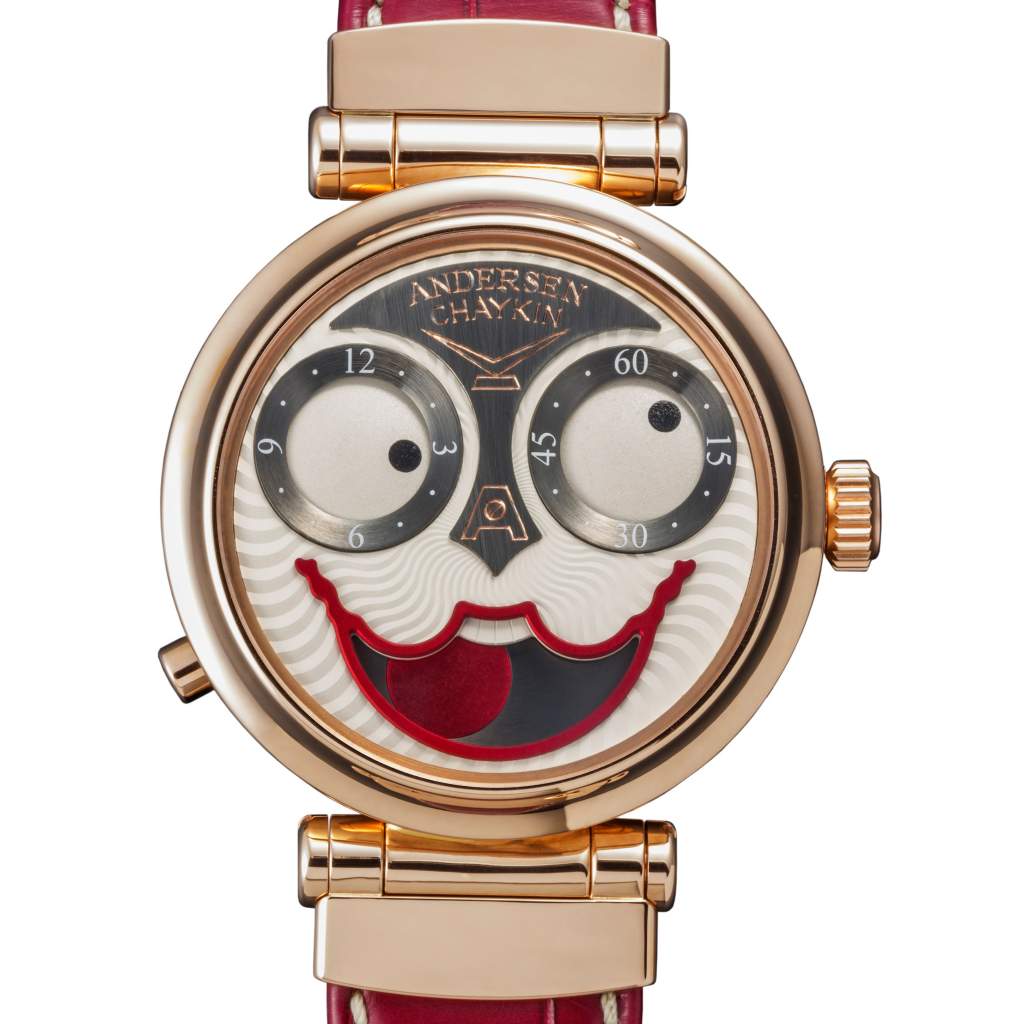 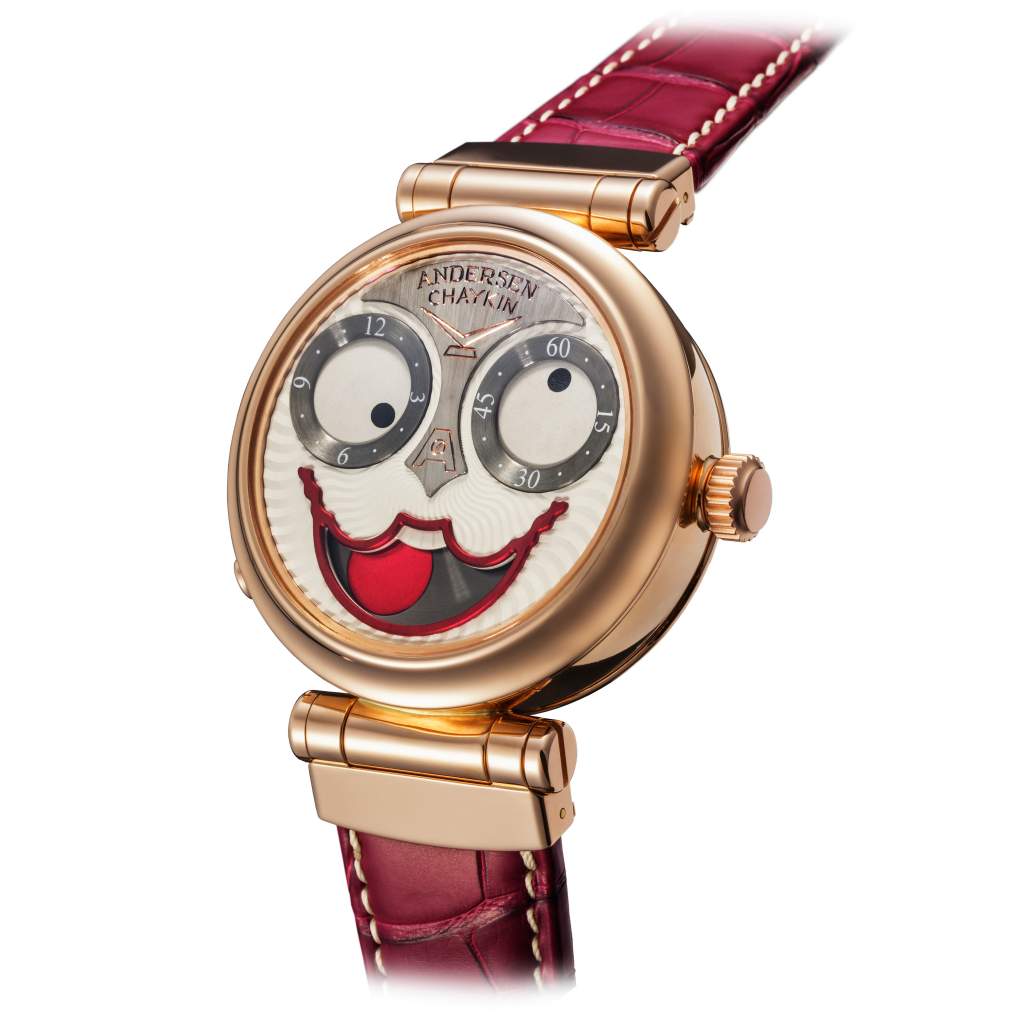 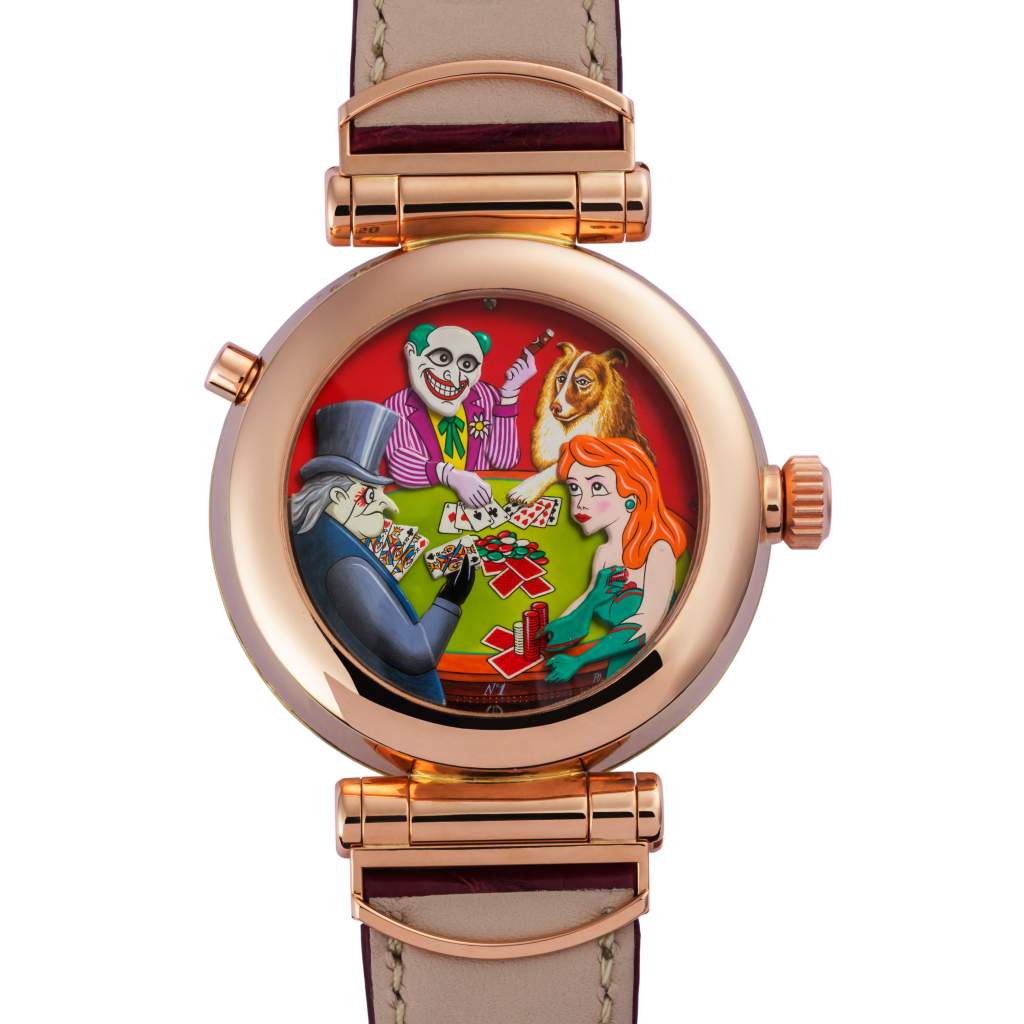 Today’s watch collection is composed of the following models

-    "Montre à Tact" (without hands) where one can read time in a small window between the lugs thus leaving free personalization of the dial with miniature-painting or hand "guillochage"
-    "Automaton" that offer very complicated (Erotical) Automatons on the back of the watch with bespoke dials possibilities
-    Watches with multiple time zones – World Time watches (Tempus Terrae Collection)
-    "Hautes Complications" – Perpetuel Secular Calender 20th Anniversary or Minute Repeater or Jumping Hours etc.
-    "pièces uniques" manufactured in collaboration with watch collectors

The Manufacture focuses on three main areas: designing and making clocks and watches, making timepieces to order and inventing own movements with complications. Each creation is based on detailed handwork resulting in perfection. Konstantin runs his own manufacture and has registered over 70 patents for his innovative movements and inventions in general mechanics: a unique achievement for a young watchmaker in a world of century-old manufacturing. In 2018 those two high end watchmaking companies joined forces and developed the “Automaton Joker”. This timepiece is the first collaboration between the co-founder of the AHCI (Académie des Horlogers Indépendants) Svend Andersen and the current President of the AHCI, Konstantin Chaykin.

How it all started for the Andersen-Chaykin "Automaton Joker" !

At Baselworld 2017, Konstantin Chaykin presented the Joker timepiece with its exclusive way of telling time, thanks to the eyes of the Joker! On top of that the moon phase is indicated on the dial at six o’clock, in the mouth of the Joker. This exclusive timepiece gained recognition within watch collectors immediately. It is sold out. Andersen Genève “Montre à Tact” Poker is inspired by “A Bold Bluff”, a painting by Cassius Marcellus Coolidge. Its miniature painting scene on the dial shows a scene of “Dogs playing Poker”.

Between 1903 and 1910, this American artist of the Belle Epoque created 16 oil-paintings of dogs in human poses. Nine of them were depicting dogs playing Poker. One of the Dogs from the Montre à Tact "Poker" from Andersen Genève ended up on a new Table. It is now playing Poker with Konstantin Chaykin’s Joker & special guests!

Andersen Genève, being very famous for Eros Automaton’s, created the first timepiece with a   poker game scene on the back dial: the Automaton Joker. With the help of Konstantin Chaykin’s knowhow, a unique way of telling time appears on the front dial. The dial of the Automaton Joker tells time like no other timepiece, thanks to the Joker’s eyes and, moon phase displayed in the mouth! To underline this Collaboration Konstantin Chaykin’s logo has been placed on top of the eyes while ANDERSEN Genève’s logo can be seen on the nose of the Joker. Both logos and the text “Andersen Chaykin” have been hand engraved by a master engraver in Geneva.

On the back of the timepiece, every element of the scene has been cut, polished and painted by hand. This has been made possible thanks to the hundreds of hours spent by craftsmen. By the push of a button on the case at 8 o’clock, the Joker’s eyes, the dog, the man and the lady are in motion. The elements are moving and the scene lasts for around 2 minutes!

Special attention to the smoothness of the movements has to be underlined; one of the most complex task to master with automaton’s. Thanks to more than 20 years of making and assembling Automaton’s, the Automaton Joker in motion displays very harmonious movements.

Another very delicate achievement is to have different speeds of the moving parts. One can note that the eyes of the Joker are moving much slower than the hand holding the card or than the dog! The lady’s hand is moving much faster than the other moving elements while she is stealing chips. The case of this timepiece has been made to measure in order to be able to incorporate such a complex dial and an Automaton on the back! Very delicate moving hinges guarantee an utmost comfort on the wrist and a very elegant aesthetical outlook.