Pascal Raffy is a firm believer in destiny, and I am a firm believer that Raffy was destined to make Bovet one of the great independently owned and managed boutique brands of the modern horological era.

Raffy is the owner and CEO of Bovet, a firm he took over in 2001. But if you were to think that Raffy, a French national previously professionally involved in pharmaceuticals, was just the owner of an asset, you’d be sorely mistaken: Raffy lives and breathes his Swiss watch brand, which is as dear to him as a family would be.

Unlike many other owners of watch companies, it is Raffy who personally dictates the inspiration for his boutique brand’s unique watches.

“I see it in my mind, but I am always surprised by things the artisans offer when they work on it with their depth and density,” Raffy explained during a recent visit to the brand’s impressive château workshop in Môtiers, Switzerland.

Grand inspiration for the Grand Récital

The Grand Récital continues the story of the Récital 18 Shooting Star (2016) and the Récital 20 Astérium (2017), all three of which Raffy conceived with the idea of creating world views as seen from the sky. 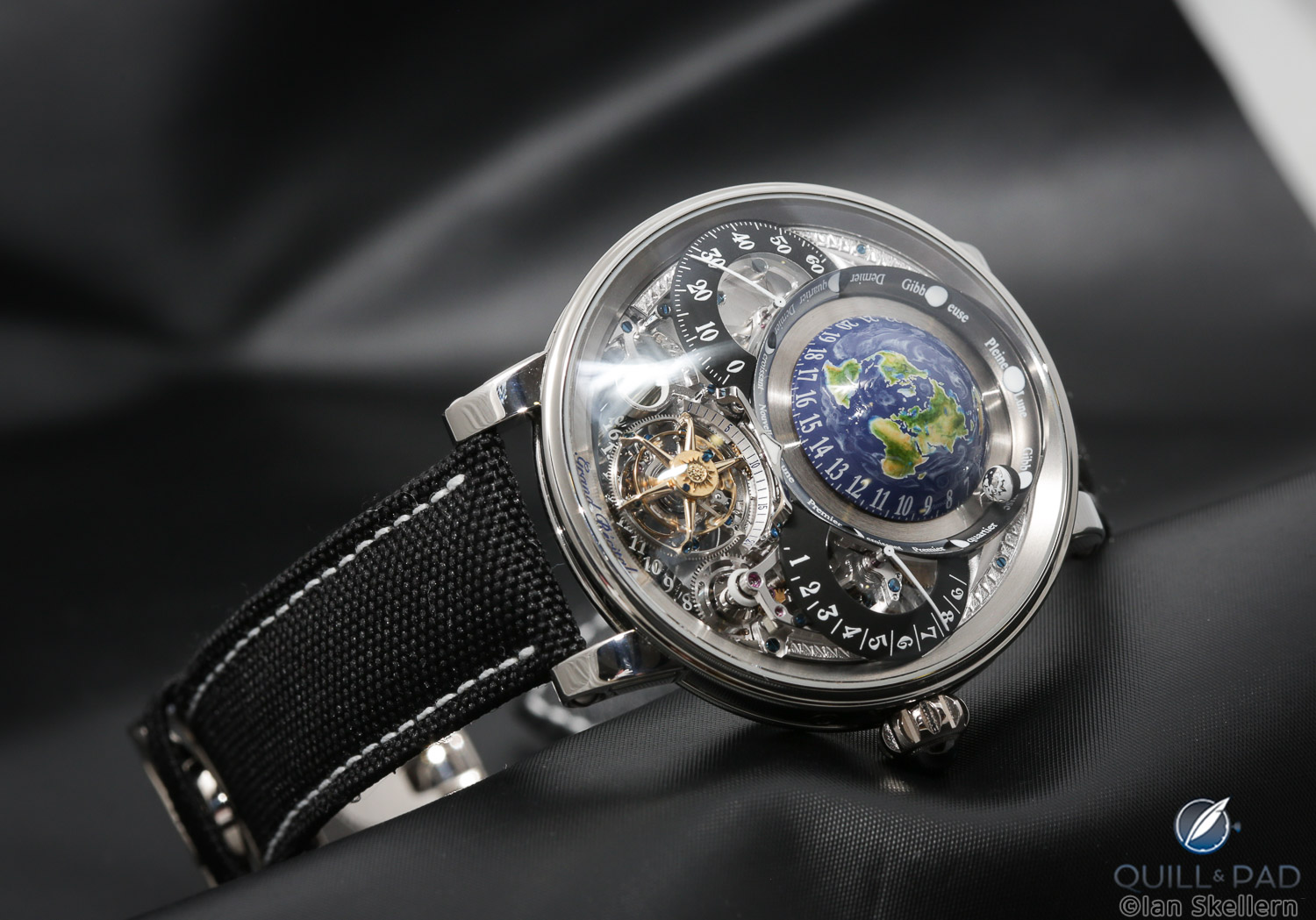 And in a nice touch, it was the sky over Bovet’s home in the Chateau de Môtiers near Fleurier that was the inspiration for all three watches: Raffy related during the visit that he enjoys the quiet time in Switzerland’s Jura when he can commune with nature and peace. 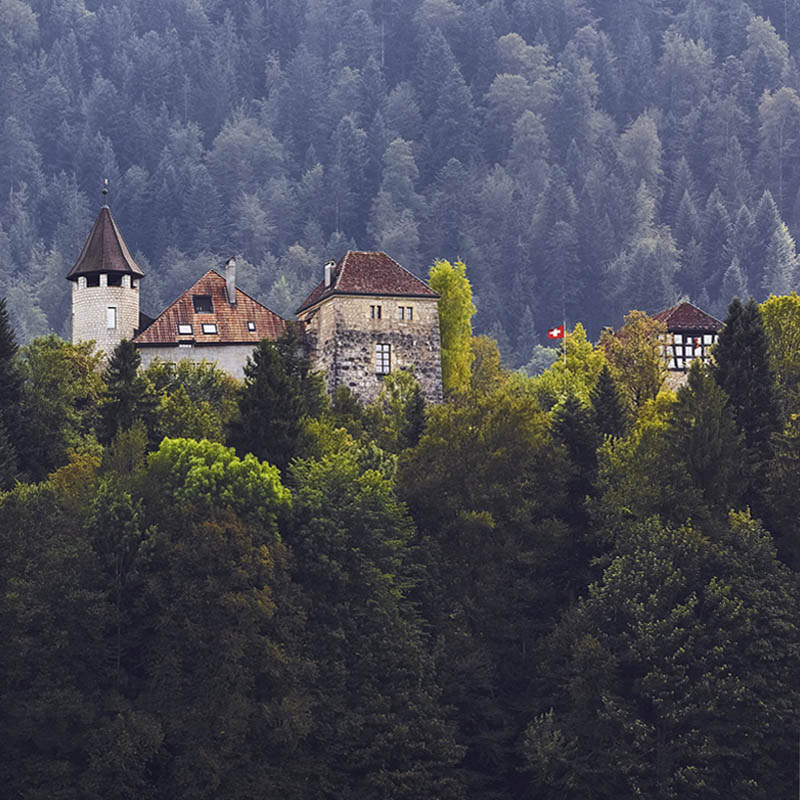 It is these times when inspiration hits, and the historical home of the Bovet family speaks to him – horologically, of course. 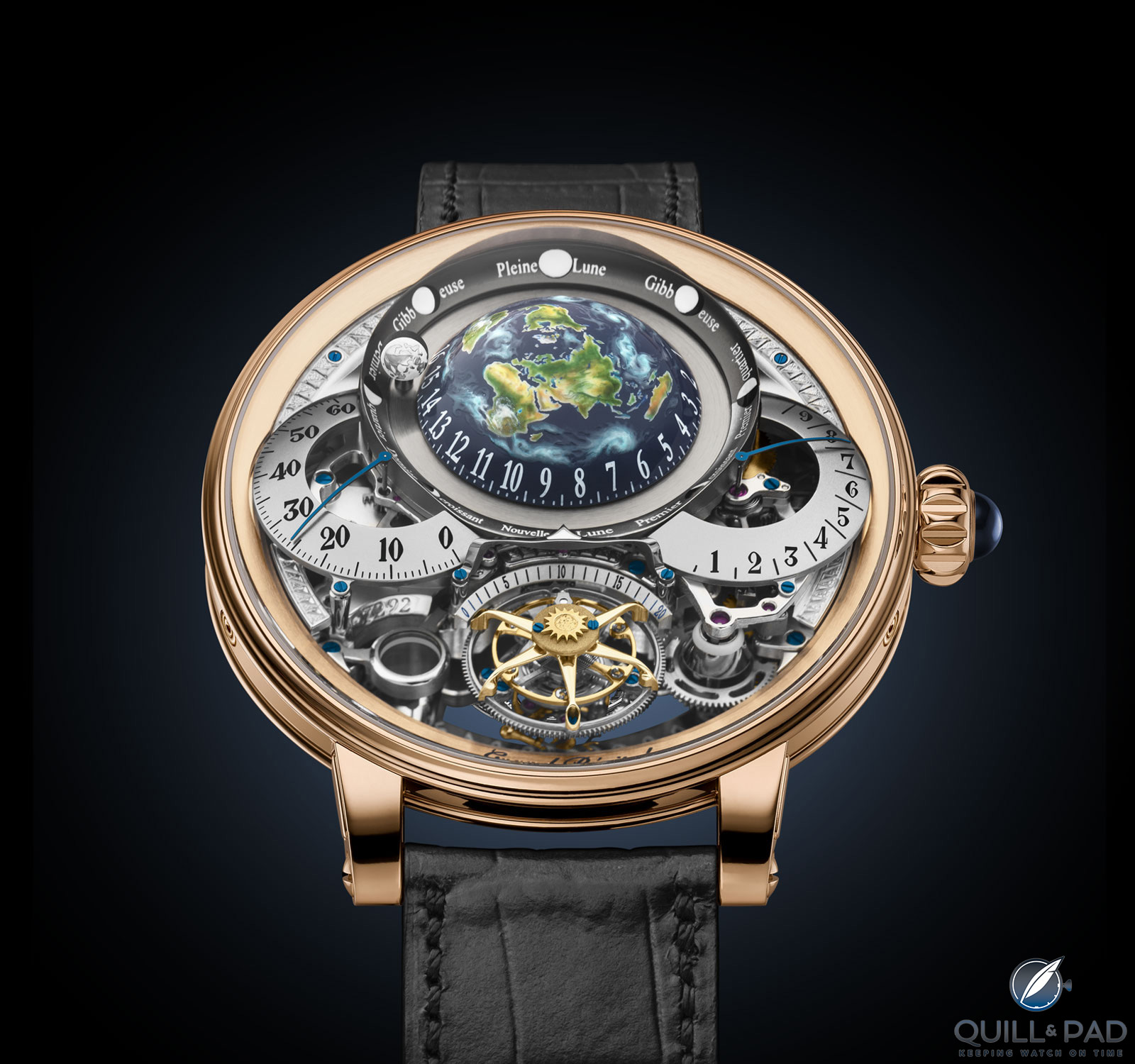 The constellation Orion, visible so brightly above the mountains of the Jura region, seems to grip him, and in particular the three stars called Zeta, Epsilon, and Delta that make up Orion’s Belt.

“The three stars like my three babies,” he laughed as we talked about how brightly the Grand Récital, the Shooting Star, and the Astérium shine with both precious materials and just the right amount of Super-LumiNova added to the terrestrial depictions visible through their sapphire crystal domes. 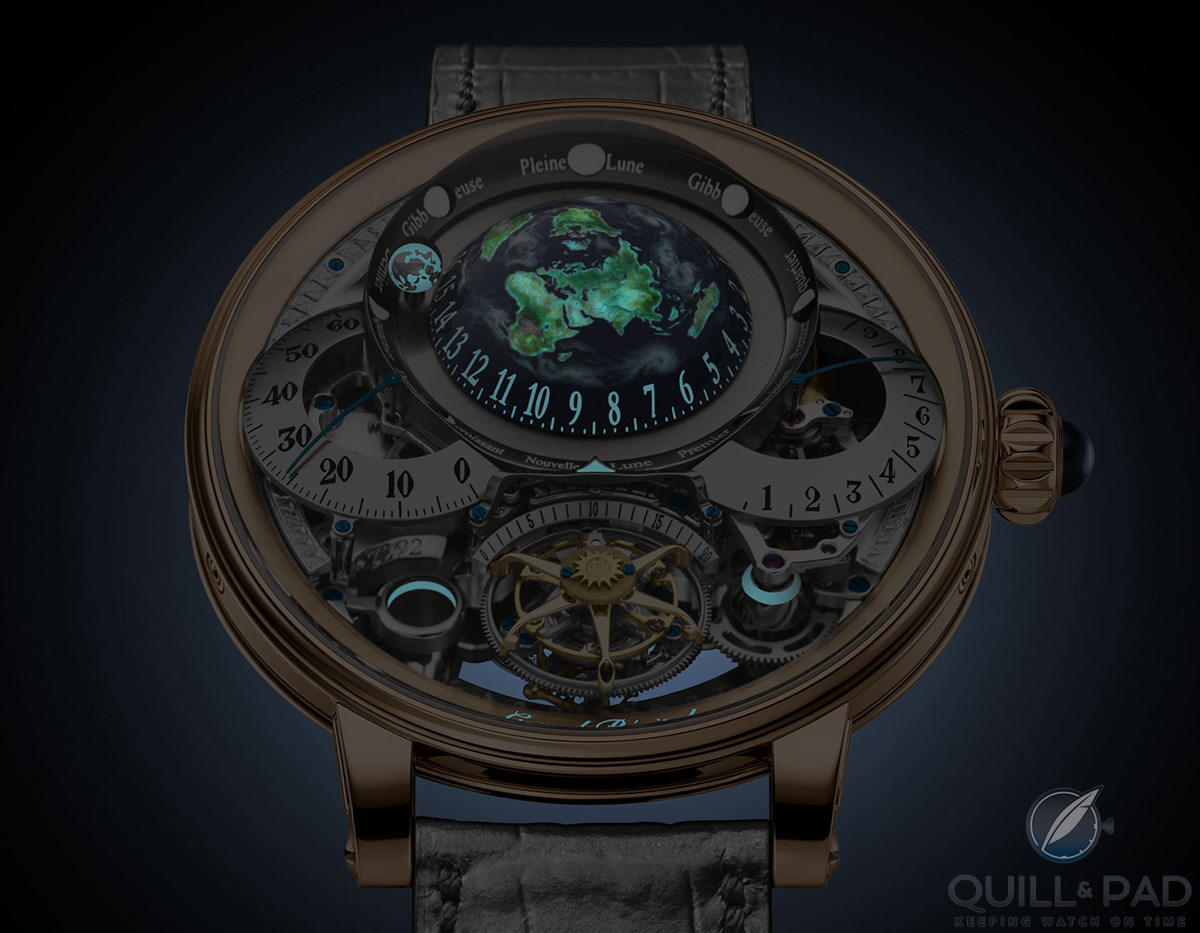 To him, the three stars also express time, earth, and who we are in the universe.

The grandeur of the Grand Récital

The surroundings an object finds itself in influence the impression it gives to others. But even without the grandiose, “starlit” box and the spacious office space so tastefully furnished within the fourteenth-century castle where this watch was presented, the Récital 22 could do nothing other than impress anyone observing it. 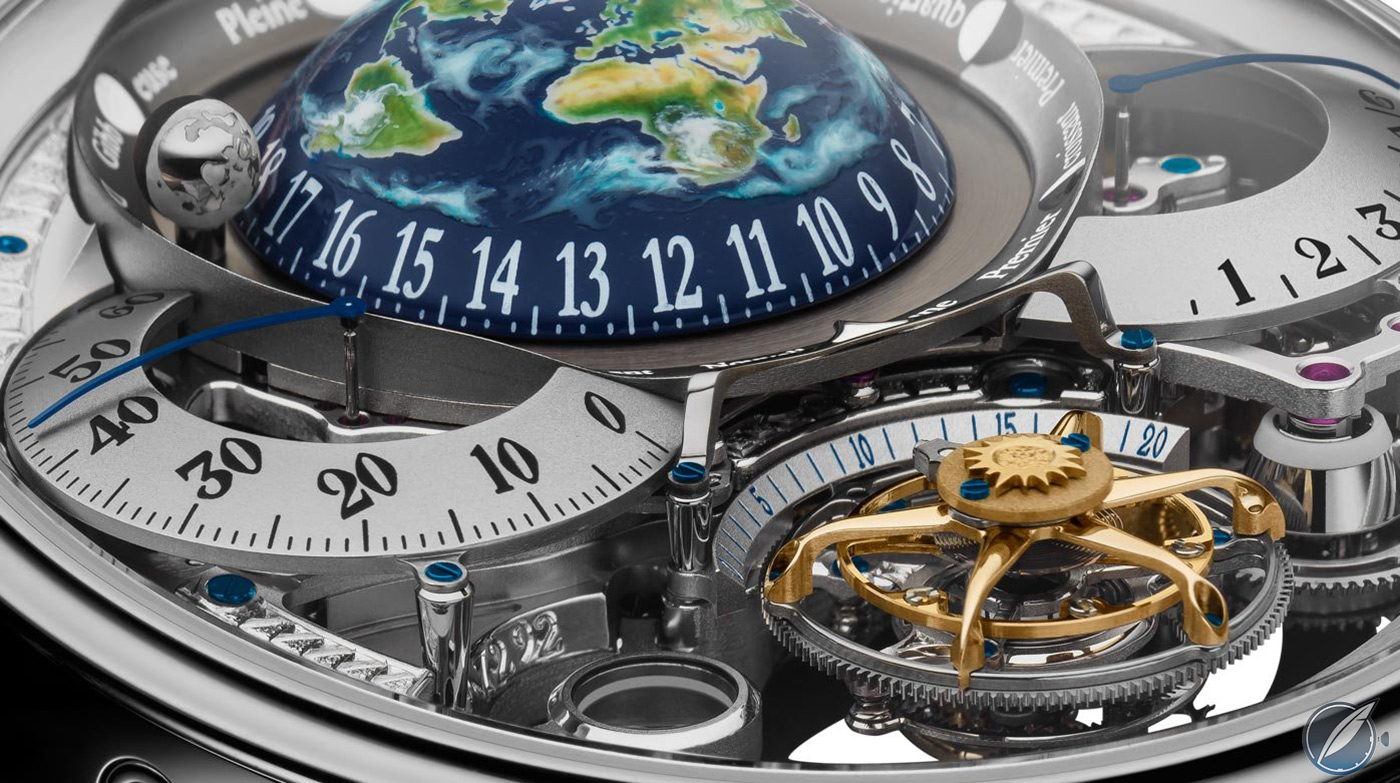 And this is not just about the stately 46 mm size of the timepiece. No, this grandeur derives from the original nature of the watch’s technical elements combined with the beauty of its mechanical artistry – starting with the unusual asymmetrical case, one that invites both transparency and comfort for the wrist.

With the majority of the movement and its indications in the upper half, the case inclined toward the bottom of the wearer’s wrist also enhances the watch’s sense of depth. Additionally, it allows a front-on view of the movement through the pronounced sapphire crystal. 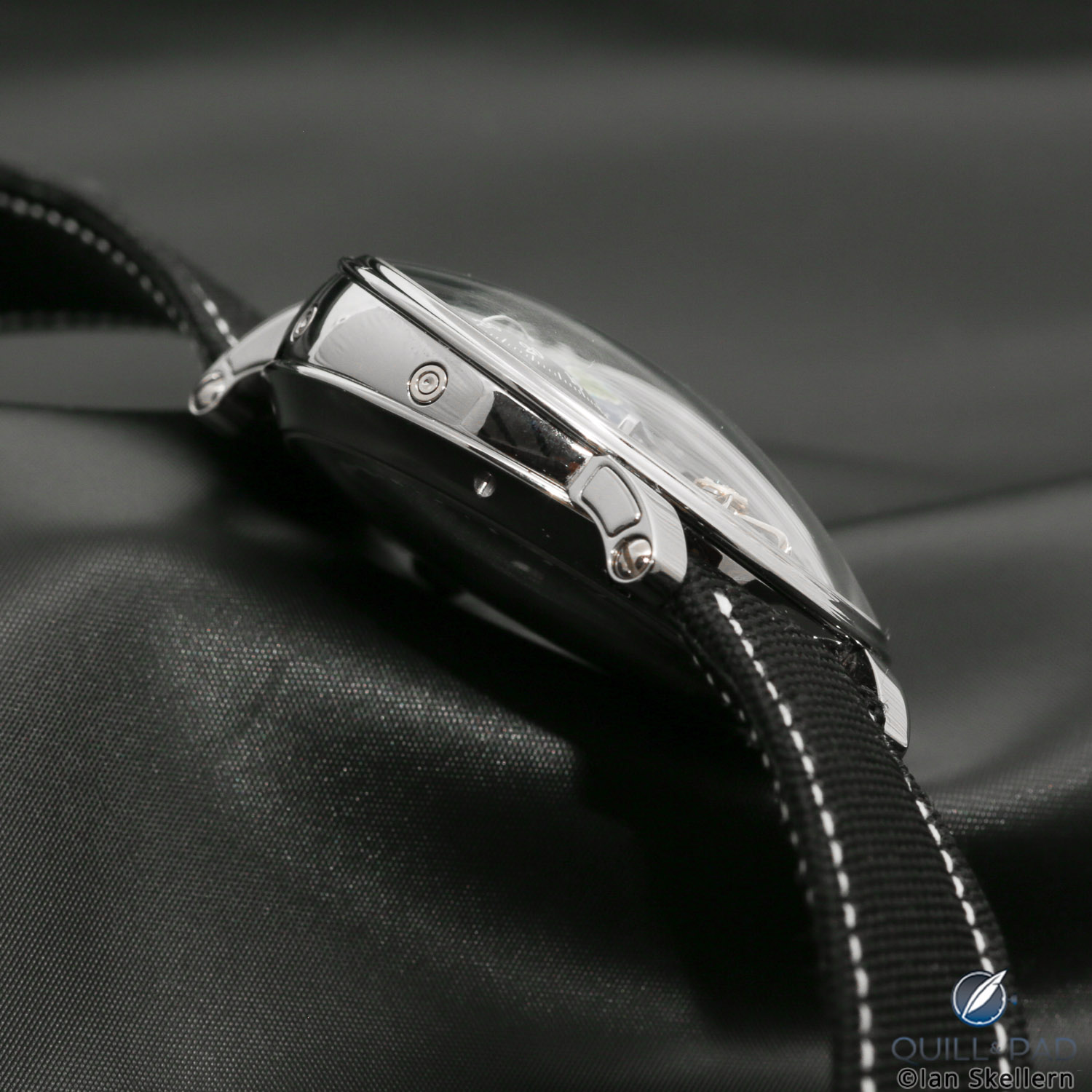 The unusual, but practical, sloped case of the Bovet Récital 22 Grand Récital

This registered case design, inspired by Raffy’s own angled vintage writing desk, with its cabochon-fitted crown at the 3 o’clock position made its debut with the Récital 18 Shooting Star and was again utilized for the Récital 20 Astérium. 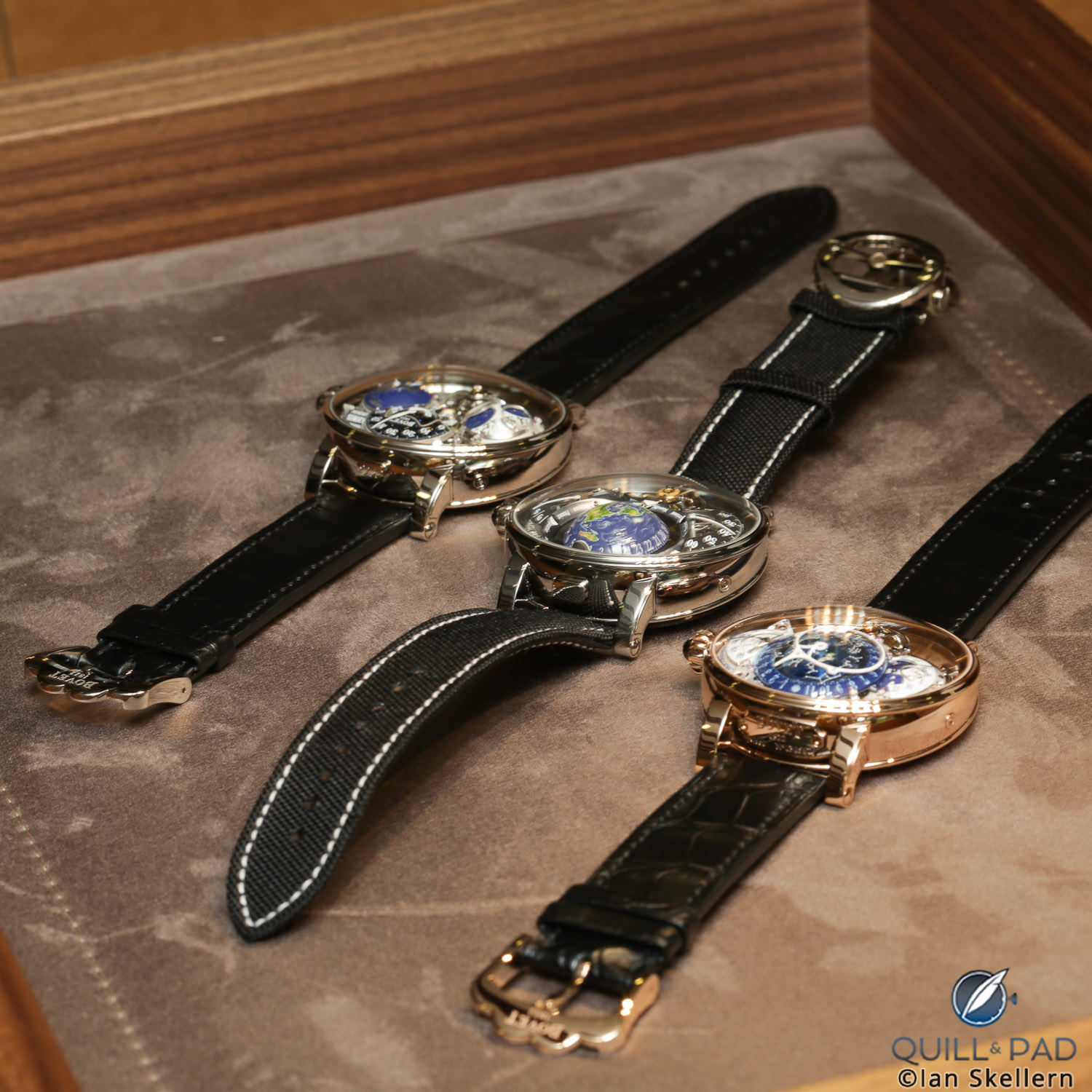 Bovet describes this timepiece as a wrist-sized orrery, and the description is apt.

The orrery is a mechanical representation of the orbits of planets and moons around our sun. Another recent example is the Graham Geo. Graham Orrery Tourbillon.

While the Graham Geo. Graham Orrery Tourbillon uses a diamond in the center of the dial to represent its sun – thereby taking the historical representation of the mechanical machine quite literally – the Bovet Grand Récital 22 goes a more poetic route, using its flying tourbillon at 6 o’clock as the dramatic representation of our life-giving sun, its gold-plated titanium carriage evoking fiery sun rays with its five exquisitely finished arms. The technical design of this tourbillon is the subject of one of the five patents this watch carries. 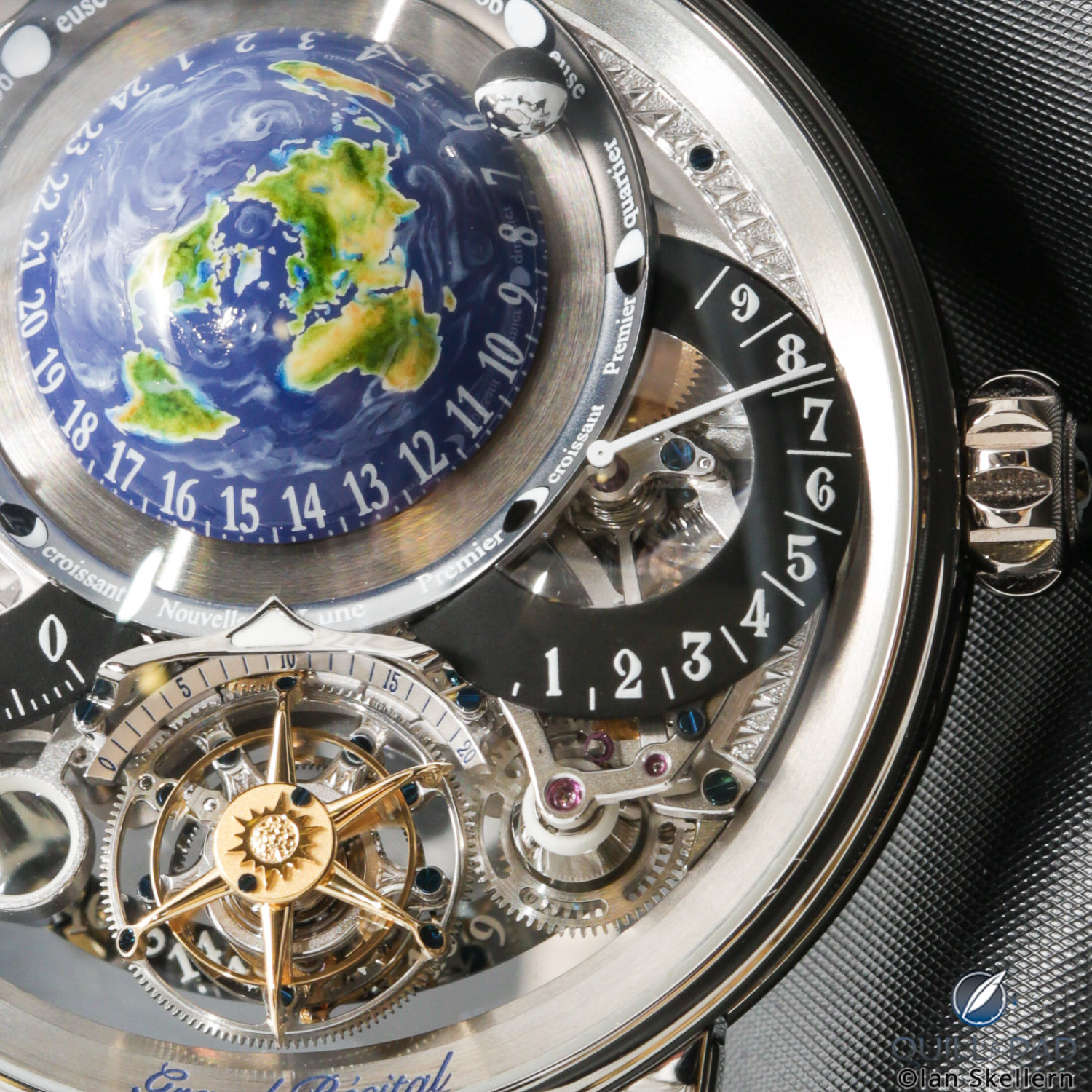 The portrayal of the earth, balancing the sun’s representational tourbillon across the dial from it, is placed at 12 o’clock. Its size and location let the observer know what this timepiece’s creator considers most important element on this dial: the hemispherical earth with its 24-hour display of the time dominates the watch’s visuals like no other element.

This earth makes one counterclockwise revolution around its axis every 24 hours. It is represented here by a hand-engraved and -painted half-globe comprehensively decorated with depictions of oceans, mountains, deserts, and even forests. Incorporating lume into the painting, the earth radiates a soft light even in the dark, separating itself from the ocean’s waters and the nicely detailed clouds above them. Hand-painting this hemispherical globe requires one full week. 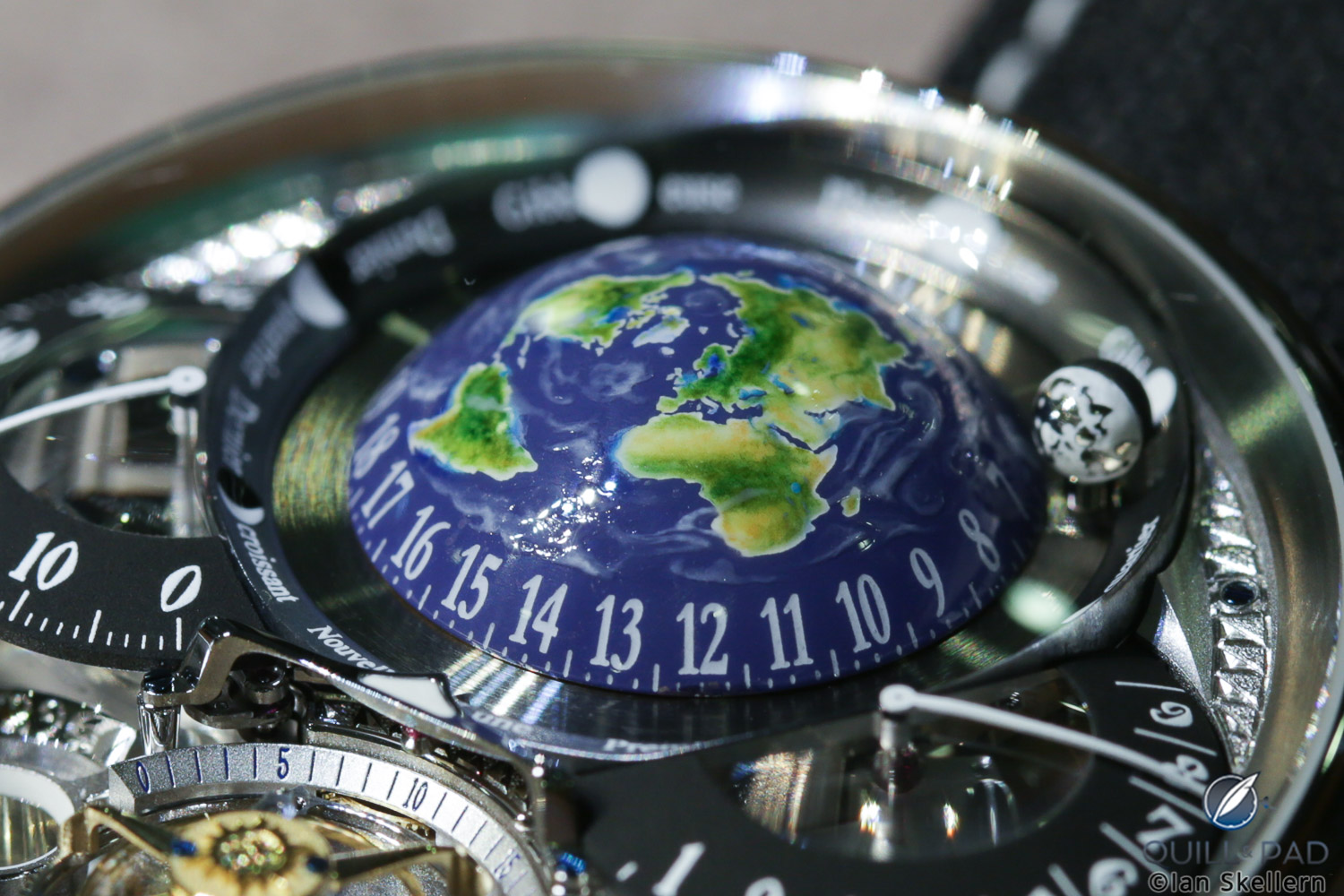 But this globe is not only here for aesthetic purposes: at its base, a scale with 24 painted numerals and a three-dimensional titanium hand display the hour.

A three-dimensional spherical moon makes one complete round around the globe once every 29.53 days – the moon’s natural synodic period – and while it does that it displays the current phase. The age of the moon is depicted on the outside scale in French. 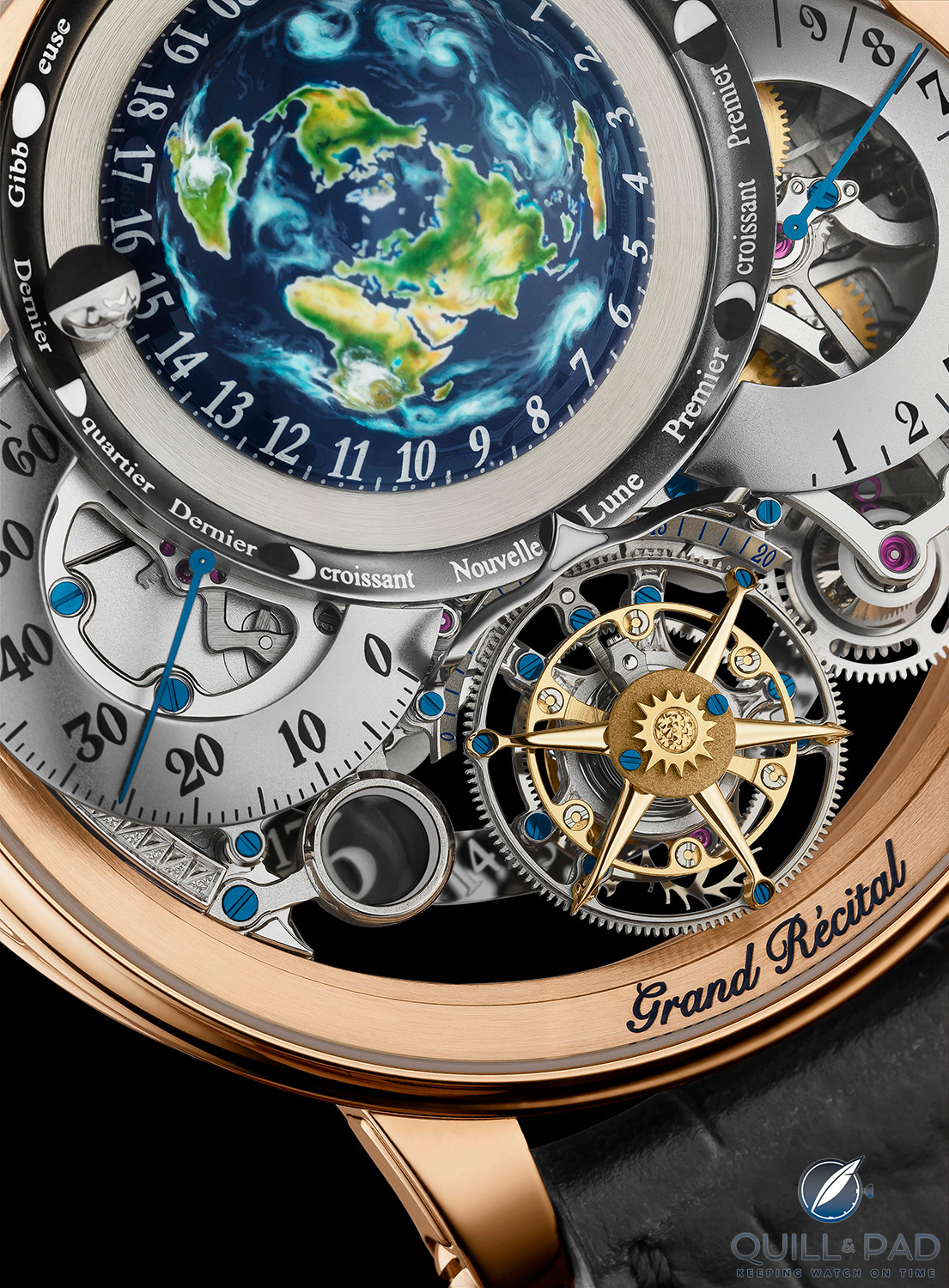 It’s no wonder that the moon gets such special treatment: the earth’s satellite is one of Raffy’s favorite elements. And this particular moon is so precisely calculated that it will deviate by one full day only every 122 years.

The moon sphere is divided into two parts: one is black to symbolize the dark side of the moon, while the other is engraved with a texture to make it look like the surface of the moon. These engraved sections are filled with luminous substance.

And the time display?

Nonetheless, with the large globe dominating the dial as it does it might be hard to know where to look for the simple display of hours, minutes, and seconds at first despite how logically set up they are. 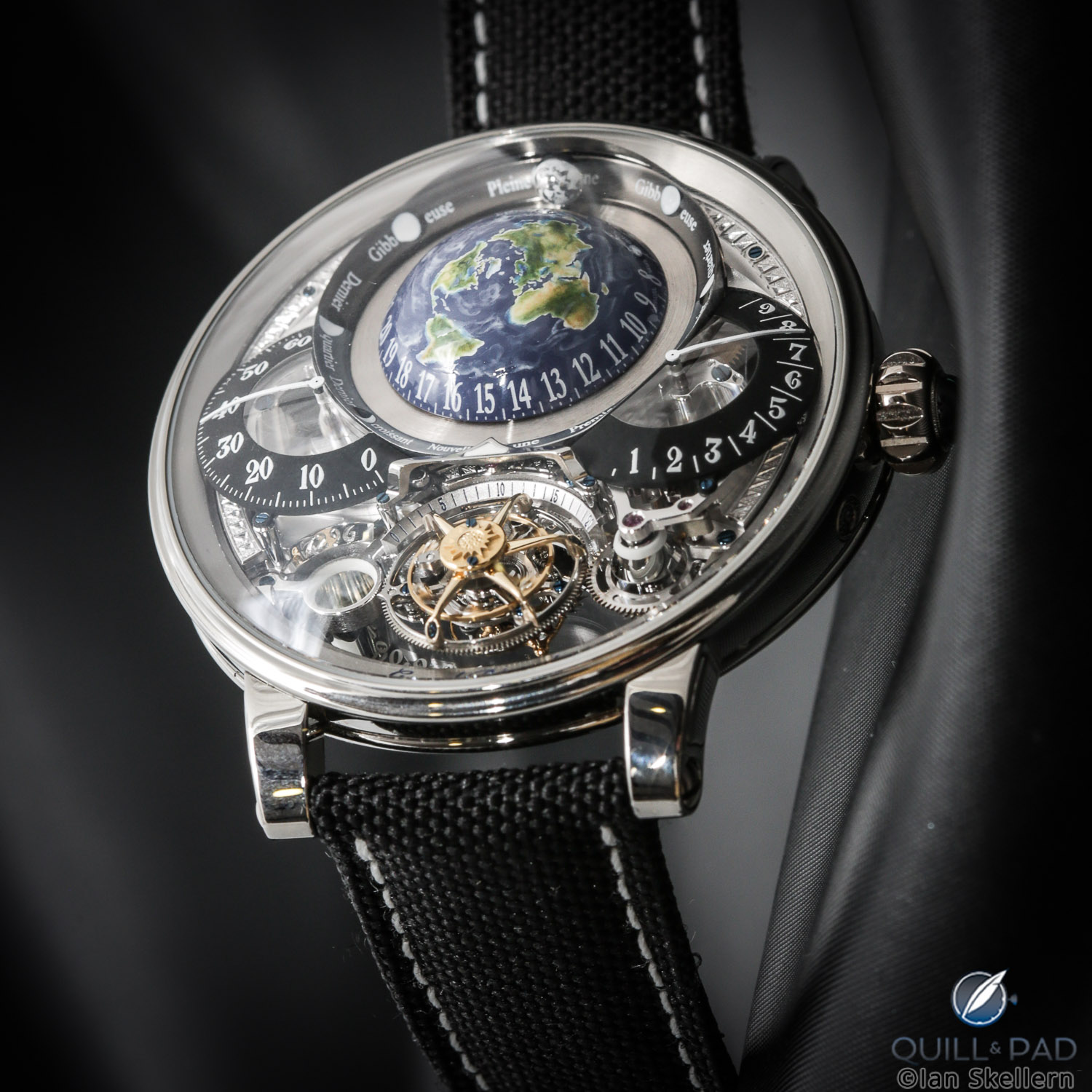 What time is it? Once you know, it is easy to see that it is 3:40 pm on the Bovet Récital 22 Grand Récital

The hours, as previously mentioned, encircle the revolving globe; a hand positioned between the globe and the tourbillon points to the current hour.

The minutes, which are retrograde – meaning the minute hand jumps back to the beginning of the scale once it has reached the “60” – are situated at 9 o’clock. The seconds are located on the flying tourbillon’s cage.

But that’s not all: a power reserve display at 3 o’clock, indicating when the nine days’ worth of power this watch offers is coming to an end, balances out the dial. A magnified date display at 7 o’clock visible on both sides of the watch is the subject of another of the five patents. On the front, a ring machined from solid luminescent material and placed around the inner edge of the aperture emphasizes the date display. 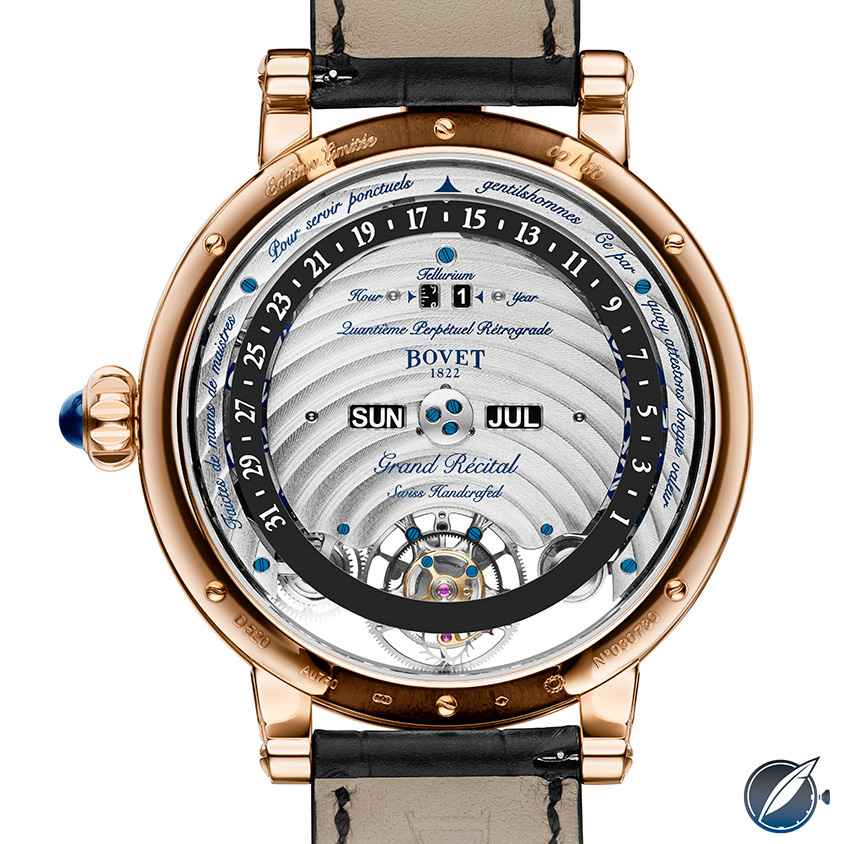 Flipping the watch over reveals a perpetual calendar nestled among a beautifully finished, large bridge decorated with circular côtes de Genève. The date is visible on this side as the full ring, while the hour, day, month, and leap year are indicated in windows.

While this perpetual calendar may look relatively simple, getting all the elements the way that Raffy wanted them – in other words, as an easy-to-set-and-adjust reference for the indications on the front – needed just about one year to perfect.

The entire perpetual calendar can be set and adjusted by one single push piece located between the upper lugs. Naturally, there are also correctors located on the case that can also be used to set and adjust each indication separately if so desired.

“This is a dream feature for collectors,” Raffy commented. And I concur.

Five patents on this celestial movement

The Récital 22 Grand Récital is powered by one extremely complex movement comprising 472 components and featuring an incredible nine days’ worth of power reserve from just one single mainspring barrel.

The flying tourbillon rotates a free-sprung balance spring produced at Bovet’s Tramelan manufacture, which has been called Dimier since 2006. You cannot get much more in-house than that.

Five patents were taken out for this movement. The patented elements include the date showing on both sides; the double-sided tourbillon construction; the motion of the spherical moon with day/night and luminous substance depicting which part of the moon is directly illuminated by sun; the movement with one regulating organ powering several mechanisms simultaneously; and a micrometric track used in the retrograde minutes. 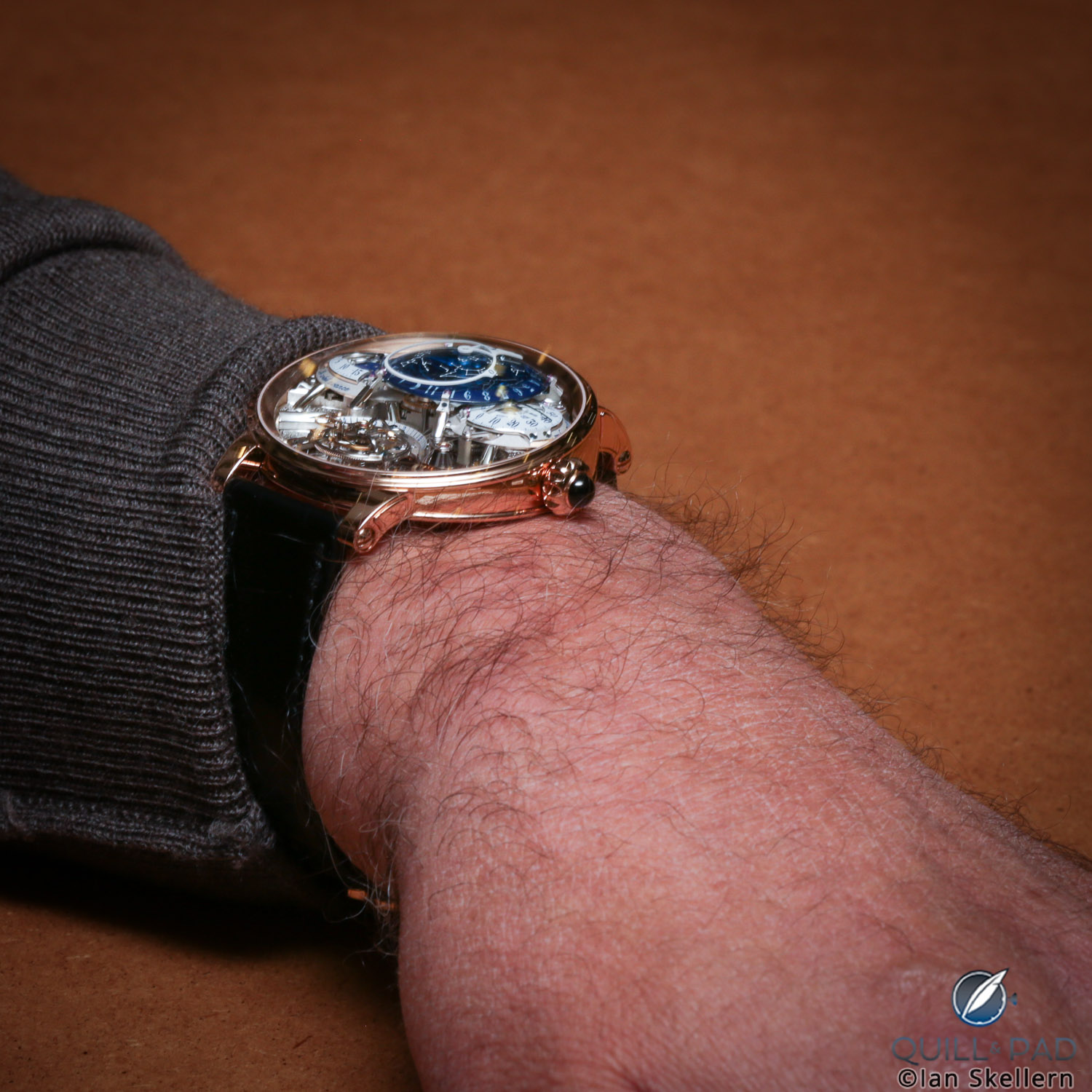 As with all Bovet timepieces, customization is an option for each of the 60 pieces in this limited edition – and it goes further than one may have expected. Cases and dials are the usual elements that get customized using miniature painting, gemstones, guilloche, and/or enamel or lacquer.

But the Bovet Récital 22 Grand Récital offers yet another element for customization: the orientation of the hand-painted globe can be chosen by its future owner so that his or her preferred location is positioned along the earth-sun axis at midday.

This is likely the literal definition of having the world in your hands.

* This article was first published on May 24, 2018 at The Astronomical Grandeur Of The Bovet Récital 22 Grand Récital.