Jean-Christophe Babin, CEO of Bulgari, talks about participating in, and winning, the Grand Prix d'Horlogerie de Genève and an upcoming new launch.

Four Bulgari watches have been singled out by the GPHG jury. What pleases you most about these choices?
It’s the perfect balance for Bulgari, two masculine watches and two jewellery watches! But Finissimo stands out in the Men’s category, which had more candidates, making this pre-selection a particular source of satisfaction. Finissimo perfectly embodies the two dimensions of Bulgari Watchmaking: Italian style and horological expertise. On the one hand, it picks up Roman architectural codes while presenting highly technical lines that might have been designed by Leonardo de Vinci; and on the other, its exceptional movement would have been unimaginable 40 years ago when Bulgari became involved in men’s watchmaking. With such a recent watchmaking history, producing a movement with the thickness of a five-franc coin in-house, with or without a tourbillon, is a great achievement in itself that demonstrates our mastery of high end watchmaking. 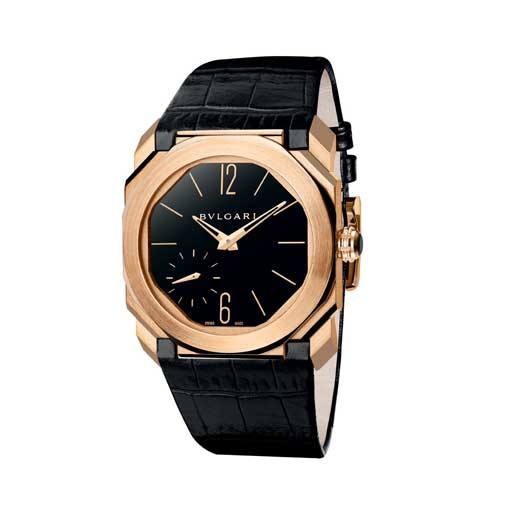 Does this statement also apply to Il Giardino Notturno selected in the Ladies’ High-Mech category?
Indeed, and in this sector, Bulgari is one of the most innovative and ahead of the game brands. Many jewellery watches have been created in the past, and many masculine complications, but very few brands have brought a masculine complication into the feminine universe. Il Giardino Notturno is the fourth development in this case featuring a concept combining jewellery, artistic crafts and sophisticated horological complexity. Therein lies the luxury of this watch, alongside its immediately visible aesthetic qualities. 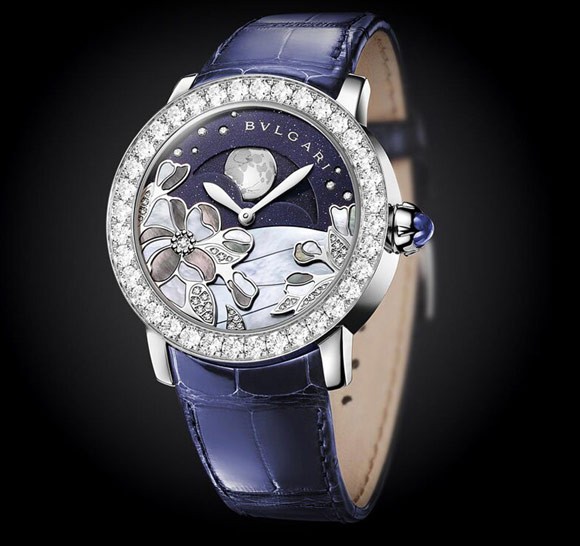 What has the prize won last year in the GPHG Jewellery category meant to you?
While the impact at the end-consumer level is always very difficult to evaluate because there are many factors involved, the positive effects on influential trendsetters are undeniable. This award has sparked great motivation and instilled a sense of pride in our teams, including our boutique sales advisers. For multi-brand retailers, it is an additional argument in promoting Bulgari, since in a store with 15 or 20 brands, having powerful arguments gives a distinct competitive edge. For example, the fact of being a full-fledged Manufacture that can make jewellery watches – and in this instance of seeing our jewellery watches recognised by the most important jury in the watch industry – is  somewhat like having a film that wins an award at the Cannes International Film Festival. 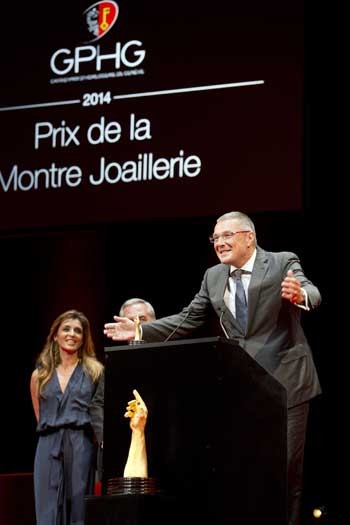 The 15th edition of the GPHG will take place on October 29th. What is your experience of the work achieved by Carine Maillard and Carlo Lamprecht who direct it?
The Grand Prix has become an institution that reaches well beyond the watchmaking microcosm: it is clearly THE most sought-after annual get-together, and no longer exclusively among the watch industry community itself, but also for watch fans. In my opinion there are two reasons for this success: repetition, because it takes time to develop the visibility and reputation of an event; as well as the admirable manner in which the jury has evolved. Its expansion and its neutrality give the Grand Prix ever-increasing legitimacy and credibility. Carine Maillard and Carlo Lamprecht were right to have fought tooth and nail to defend the Grand Prix, and also to have revamped the jury so as to make it completely independent. Today, it is an essential landmark for all watch brands and I hope that all will take part in it, convinced that it is won on the merit of creativity and craftsmanship. And if they don’t get a prize this year, they may well do so next year or in two or three years’ time, not to worry. Each prize-winning watch is an advertisement for our industry and in the end, the greatest advantage of the GPHG is an annual celebration of watchmaking giving the sector special international visibility on this occasion. This major spotlight is amazing for the entire industry, and that is why we take part each year.

You are launching your new Divina collection in parallel. What should your clients expect?
Firstly, to rediscover the Diva shape, notably with regard to the wristband attachment, because Bulgari is committed to its jewellery design codes. But above all to discover an endless range of acetate dial variations produced by our dial-making company in La Chaux-de-Fonds*. Acetate is a living material that makes each dial unique. It is as if one were to cut the trunk of a tree: each slice is different because you never find the same texture in the same place. These rich depths of texture provide an appealing alternative to mother-of-pearl. In addition, this new line offers women an evening watch that one can classify in the category of affordable jewellery watches, with prices starting at 15,000 francs. It is positioned between the everyday wear watches such as the Serpenti and Lucea that have become our bestsellers, and the Diva, Astrale and Musa occupying the very high end of the range at 50,000 francs and up. The Divina will be available in our boutiques in October 2015 and in our retailer network next year. 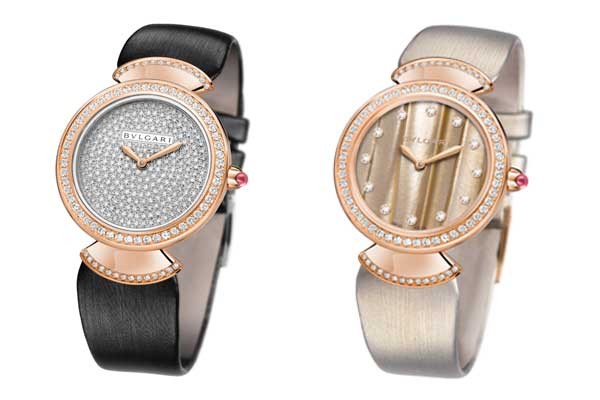