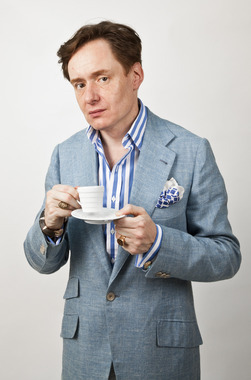 To my undying shame I had never until November visited Tennessee, and in my arrogant way I thought it would be an experience that somehow managed to blend the appeal of Dollywood with The Dukes of Hazard. That was until I sighted Blackberry Farm… I daresay you all – or y’all, as I have learnt to say – know about Blackberry Farm. Well, nobody thought to mention it to me, so I have been missing out on one of the great experiences of American life. It is one of those few places where the website, with its usual depiction of the destination as a cross between the Garden of Eden and Paradise on a good day, manages to undersell the place.

I could have quite happily stayed a week in my little log cabin at Blackberry Farm; it was so restful and the food was so good. But I had agreed to join the jury of the Grand Prix d’Horlogerie de Genève and so I had to fly from Knoxville to Charlottesville to Kennedy and then to Geneva. One of attractive things about airports in the southern States is that they have rocking chairs dotted around the place – it is really quite restful. Then when I got to Geneva at about nine in the morning, I had a shower at the airport and arrived fresh as a daisy (albeit one that had been pressed in a book of keepsakes by an Edwardian amateur botanist) at the Cité du Temps, where the jury was already in full deliberation mode.

For the sake of familiarising myself with judicial procedure, I had watched Twelve Angry Men and Runaway Jury for good measure and I cannot help but think that I should have studied some Cicero, too, as a bit of persuasive rhetoric might have come in handy. Anyway, it was all rather pleasant and, under the leadership of Aurel Bacs, the outgoing boss of watch sales at Christie’s, it all moved along very briskly. Given that I enjoy watches, it was rather agreeable to be seated in a room full of fellow enthusiasts.

I also got to meet Philippe Starck, who was utterly delightful, and Ben Clymer, the founder of Hodinkee – one of those real-life clever young people who is revolutionising the digital world, or something like that… He could not have been nicer and he taught me about Instagram, while I returned the favour and showed him how to take a goose feather and fashion it into a quill. We have agreed to get together again, when he will tell me how to tweet and I will pass on a few salient observations on the unfairly neglected old media skill of manuscript illumination.

Everything was good-natured and I can only recall two slight disagreements, one of which was about the definition of a complication. I felt compelled to observe that a tourbillon should not be counted as a complication as it was not an additional function per se, but rather a means of making the movement run more regularly. I believe I was supported by one or two of the more scholarly members of the jury, which is gratifying, but the jury foreman ruled that we should judge according to the rules of the competition and that was that.

The other one was, I am sad to admit, not my instigation because it was so brilliant. There was a category for best revival and it was clear that this was the prize that Tudor was destined to win. Having been awakened from the sort of deep slumber that makes Rip Van Winkle’s coma seem like a light doze, Tudor is doing great things. Every year it brings out a great retread of a classic model and a companion piece in the modern idiom. And then someone suggested that we should give the prize to the Antikythera by Hublot.

It was an inspired suggestion – first Jean Claude Biver is someone I have known for over 20 years and is a person I like and respect greatly. Secondly, the Antikythera must be one of the oldest extant mechanical timekeepers. It was at the beginning of the 20th century when a group of Greek sponge divers came across an ancient shipwreck and one of the things they brought to the surface was a rusted hunk of metal. Slowly, modern science developed enabling future generations to unlock the secrets of this complicated device which, with its cogs, wheels and gearing system, is a sort of astronomical clock created over 2,000 years ago to predict various heavenly events. It’s a marvellously mysterious object of such complexity that comparable objects only began to be appear again during the Renaissance – in a way it reminds me of the bit at the end of Planet of the Apes where, upon digging deeper into the past, paradoxical evidence of a more sophisticated civilisation comes to emerge.

Now, I had been championing Tudor all day long, and Tudor for its part had seemingly entered every category, and it deserves recognition for the excellent work it is doing, but I also liked the idea of rewarding a re-issue of a timepiece last seen in Hellenistic days when the Ptolemaic and Seleucid empires were going strong. I fondly imagined status-conscious ancients in their chitons or togas, hanging out at the stoa or the forum, bragging to each other about how they had just got one of those new sports-combat chariots with scythe-like blades sticking out of the hubs and turning up at tavernas and calling for amphorae of Falernian wine while flashing their new Antikytherae about the place in the hope of “pulling”, as I believe Aristophanes and Menander did not call it.

Forgive me for mixing up my ancient history and dragging in all manner of different eras, but you get the drift. Anyway, in the end it went Tudor’s way for the excellent Black Bay, a landmark watch that for relatively little money gives you a steel watch with modern build quality and 1950s aesthetics. And I have to say that, in a way, Jean Claude got this award, too, as Mr Peverelli, who is doing such a good job of running Tudor at the moment, is, like one or two other of the better leaders in the industry today, someone who learnt their metier working for Jean Claude.