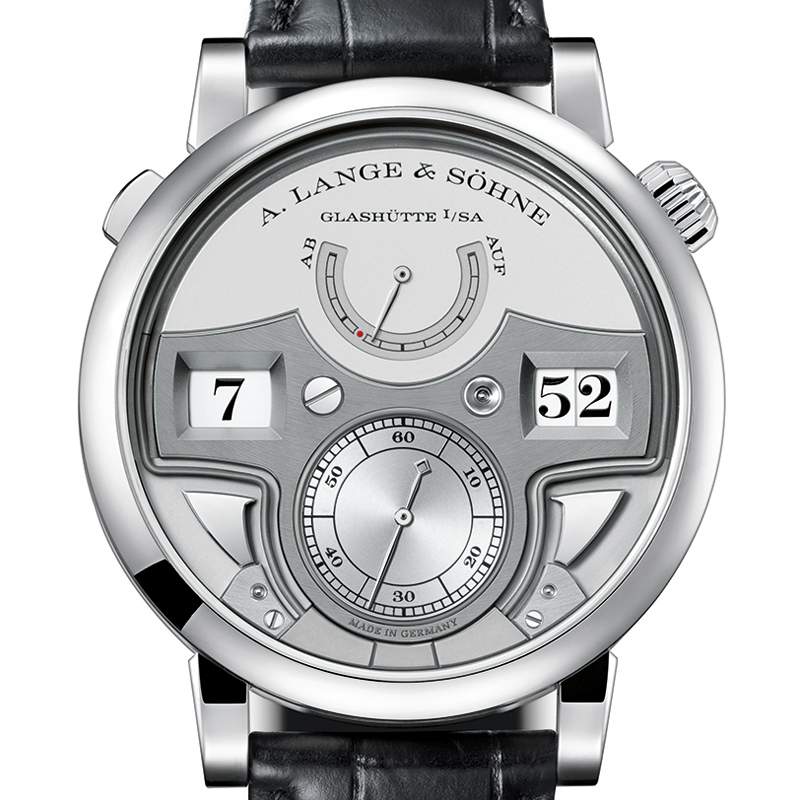 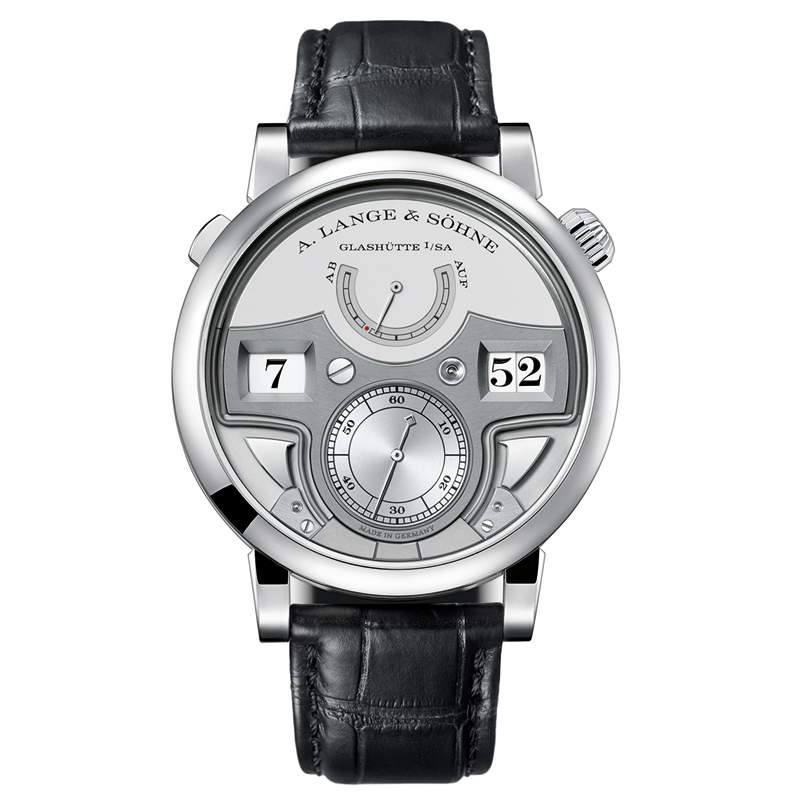 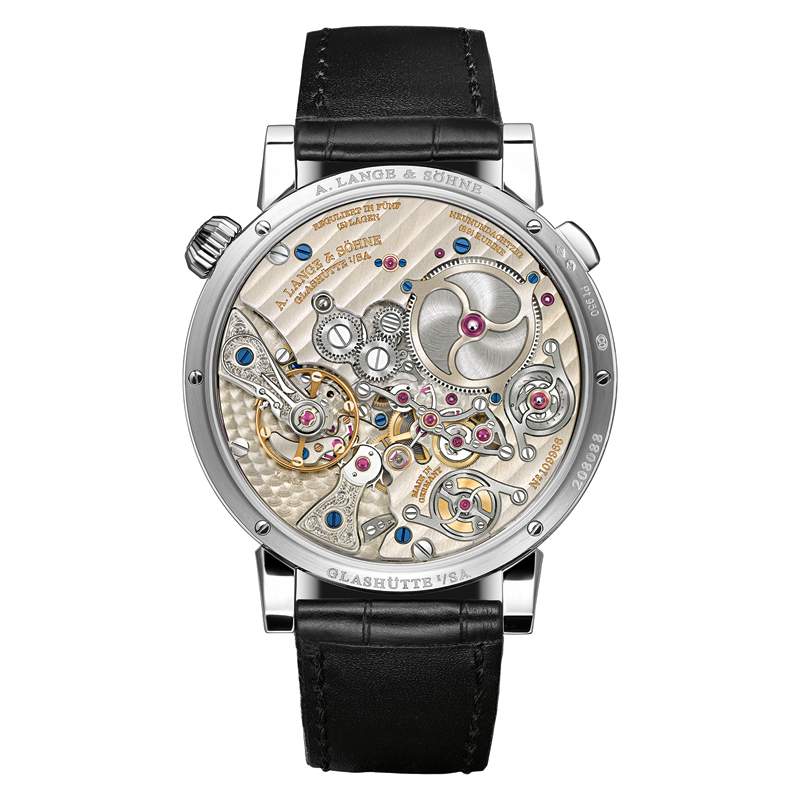 In the exalted category of chiming wristwatches, the ZEITWERK MINUTE REPEATER is a technical sensation: articulately designed, it combines a mechanical jumping numerals display with a decimal minute repeater for the first time.

Seven low tones, five double tones, and two high tones are struck at 7:52. The acoustic time faithfully corresponds to the time indicated on the dial.

When they developed the strikework for the ZEITWERK MINUTE REPEATER, the engineers were able to harness the basic principle of the jumping numerals mechanism. The time is displayed with an hour ring and two minute discs instead of with hands. Three snails connected with these mechanical display elements sepa- rately sample the number of hours, ten- minute intervals, and minutes to be acoustically indicated.

In place of the conventional slide, the ZEITWERK MINUTE REPEATER features an elaborate pusher system for activating the striking mechanism. To maximise the qualityof the sound, the engineers calibrated the movement with the case down to the smallest detail. The tuning process requires acute hearing and is performed manually to achieve harmony and reverberation of each gong separately and to assure perfect sonority in unison.

Engineered down to the tiniest detail

Countless work steps and extensive fine-tuning are required to guarantee the smooth interaction and long-term functional integrity of all mechanisms of which the 771-part movement is composed. To rule out unintended, potentially damaging manipulations, the designers incorporated a very useful safety feature. Since mechanical conflicts would occur if the owner were to set the time during a chiming sequence, the crown cannot be pulled while the striking mechanism is active: when activated, the winding train is uncoupled from the ratchet wheel that powers it. This precaution prevents the winding wheel train including the crown from turning while the gongs are being struck, which would waste a considerable amount of energy. Additionally, the switching of the numeral discs is delayed until the chiming sequence has ended. This takes about 20 seconds for the maximum succession of tones at 12:59. The acoustic time indication therefore always corresponds to the time displayed on the dial.

To assure that the repeater sequence is not prematurely interrupted due to the depletion of the mainspring’s power – in which case the watch would stop running as well –, the striking mechanism can no longer be activated if the remaining power reserve is less than twelve hours. On the power-reserve indicator, this point is identified with a red mark. Because the mainspring powers the striking mechanism via the ratchet wheel, the number of minute repeater activations and their duration will influence the availability of the underlying power reserve of 36 hours.

The contemporary face of a grand tradition

With its eminently legible jumping numerals display, the ZEITWERK MINUTE REPEATER stands out as a paragon of eloquent design. The patented constant-force escapement delivers a uniform amount of energy during the entire power-reserve period. As the source of the switching impulses, it reliably controls the numerals display minute by minute.

The L043.5 manufacture calibre inside the ZEITWERK MINUTE REPEATER is lavishly and meticulously hand-finished. Beneath the hand-engraved balance cock, the balance wheel with eccentric poising weights and a free-sprung balance spring crafted in-housebreathes with a frequency of 18,000 semi-oscillations per hour. The resonant timekeeping instrument with a diameter of 44.2 millimetres is available exclusively in platinum. The solid-silver dial shimmers with a rhodié hue. Made of black-rhodiumed German silver, the time bridge prominently frames the hour and minute numeral apertures that are located on the same plane. The black-polished steel gong hammers are visibly arranged on both sides of the subsidiary seconds dial. The hours are struck on the left, the single minutes on the right. For the double-tone ten-minute counts, both hammers strike both gongs slightly offset in time.

Lange's ZEITWERK MINUTE REPEATER is the second model of the ZEITWERK family to be endowed with an acoustic time indication. With its unusual design, it represents a further milestone in A. Lange & Söhne's impressive repertoire of innovative timepiece concepts.