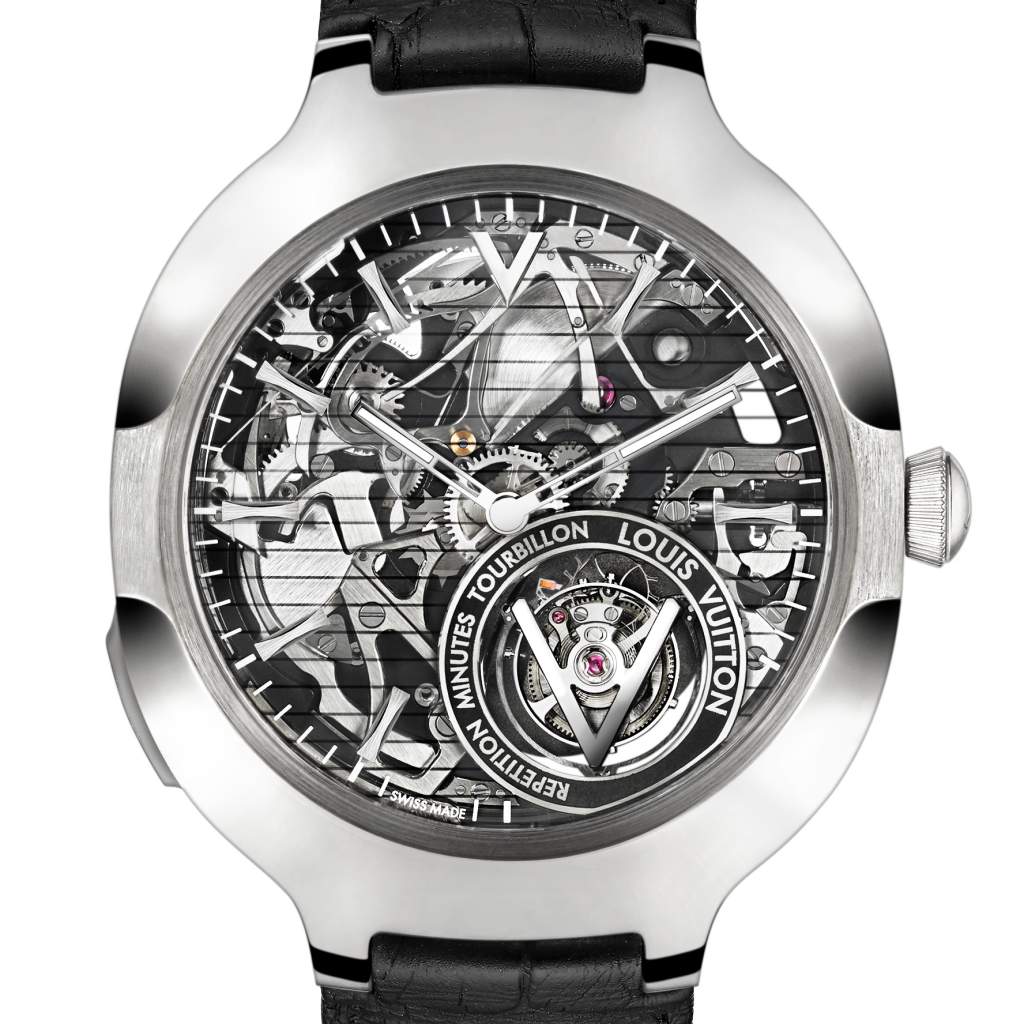 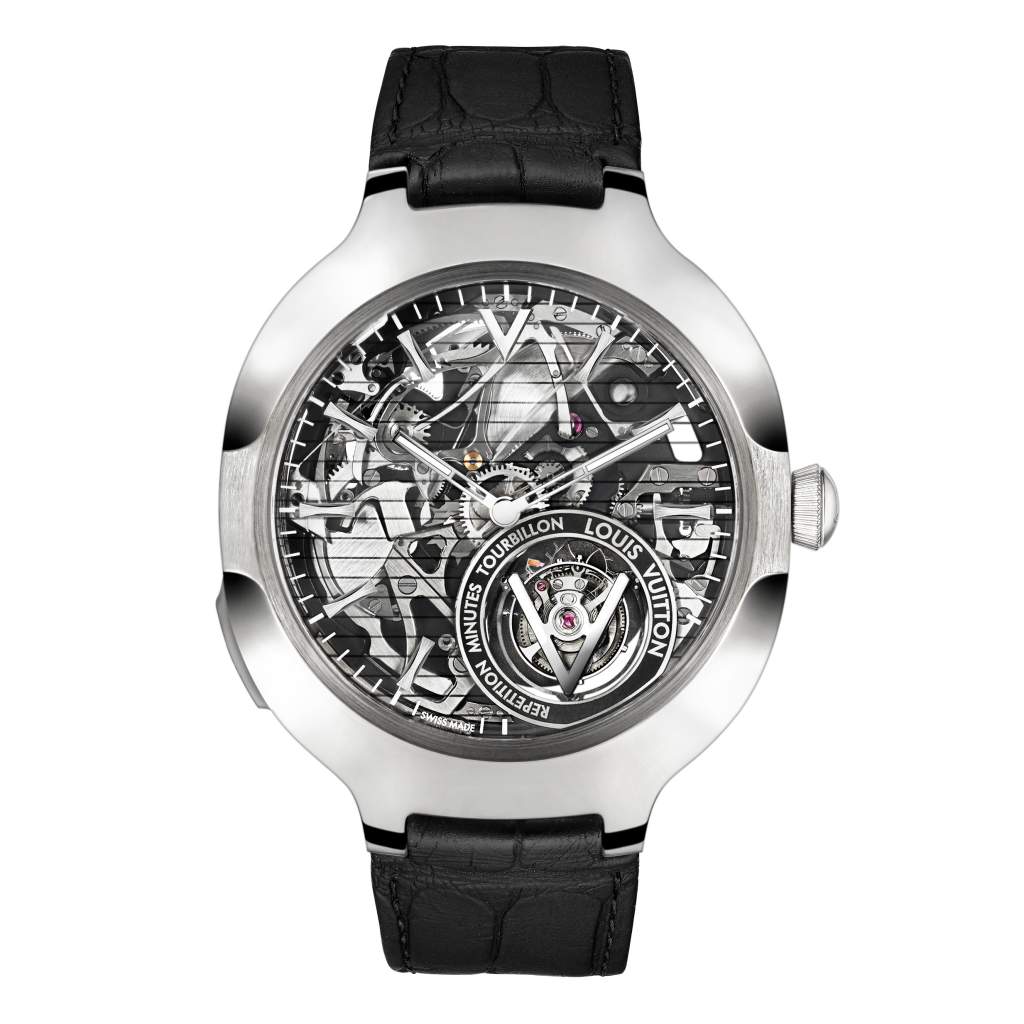 An exceptional movement with two complications in one

Louis Vuitton presents an exceptional timepiece that brings two worlds together: that of truly modern design, and that of craftsmanship, placing two icons of high watchmaking at centre stage, a Tourbillon escapement and a striking mechanism known as a Minute Repeater.

This Minute Repeater Flying Tourbillon watch is showcased in the Voyager case whose unusual shape is halfway between a circle and a square, accentuated by a case with a distinctive subtle volume effect. It is available in two white gold versions. The first, classic version alternates polished and satin-brushed surfaces, while the second precious design boasts a case set with baguette-cut diamonds with a total weight of approximately 8 carats. What is remarkable about this creation is its restrained 42 mm diameter, despite the complexity of the calibre and a thickness of just 9.7 mm, making it one of the thinnest watches with these two complications on the market. Its original design, studied proportions, and proven water resistance to a depth of 30 metres give the timepiece stylistic modernity as well as freedom of use.

The Voyager Minute Repeater Flying Tourbillon is a new demonstration of La Fabrique du Temps Louis Vuitton unrivalled craftsmanship. Visible through an original sapphire dial with a motif inspired by Louis Vuitton’s striped canvas created in 1872, the mechanical movement calibre LV100 with manual winding was developed and assembled entirely by La Fabrique du Temps Louis Vuitton and provides a power reserve of 100 hours or four days. It displays the hours and minutes at the centre and at 5 o’clock (V for Vuitton being the number 5 in Roman numerals) is another display driven by a flying tourbillon frame. Without a bridge to support it, it appears to float above the dial. Adorned with a V for Vuitton at the top, it performs a rotation in one minute, taking on the role of the small second hand.

The time in music

A Minute Repeater implies a reinterpretation of the time display. Here, the time is no longer read only with the eyes, but also with the ears, in music. This is a watch with striking-work, one of the most complex mechanisms ever developed. Two gongs and two hammers indicate the hours, quarter hours and minutes on demand, via the trigger discreetly positioned on the edge of the watch at 8 o’clock: a low note for the hours, a double low-high note for the quarter hours, and a high note for the minutes.

At eight twenty-five, it therefore plays a melody made up of eight low notes, a double low-high note, and ten high notes. And for the first time at Louis Vuitton, the striking-mechanism used is a cathedral gong. Cathedral gongs are different from classic gongs in terms of length.

The minute gong makes a 11/2 turn around the movement, while the hour one makes approximately a 13/4 turn. This makes it possible to obtain a deeper sound, with the peculiarity of making the resonance time longer. It is an important technical challenge for master watchmakers who want to offer as much space as possible for the vibration of the gongs. Indeed, they must ensure that the gongs do not touch one another or any other element of the movement or the case.

The calibre LV100 can also be admired on the back of the Voyager case through a sapphire crystal back whose aesthetics imitate the famous Louis Vuitton striped canvas. While the centre is dedicated to customisation, with the possibility of engraving the watch with the owner’s initials, the remainder of the case back allows you to admire the dance of the hammers that strike the gongs, interpreting the time through music.

This exceptional mechanism was assembled by a single master watchmaker at the La Fabrique du Temps Louis Vuitton workshops. It requires 320 hours of extremely meticulous craftsmanship.