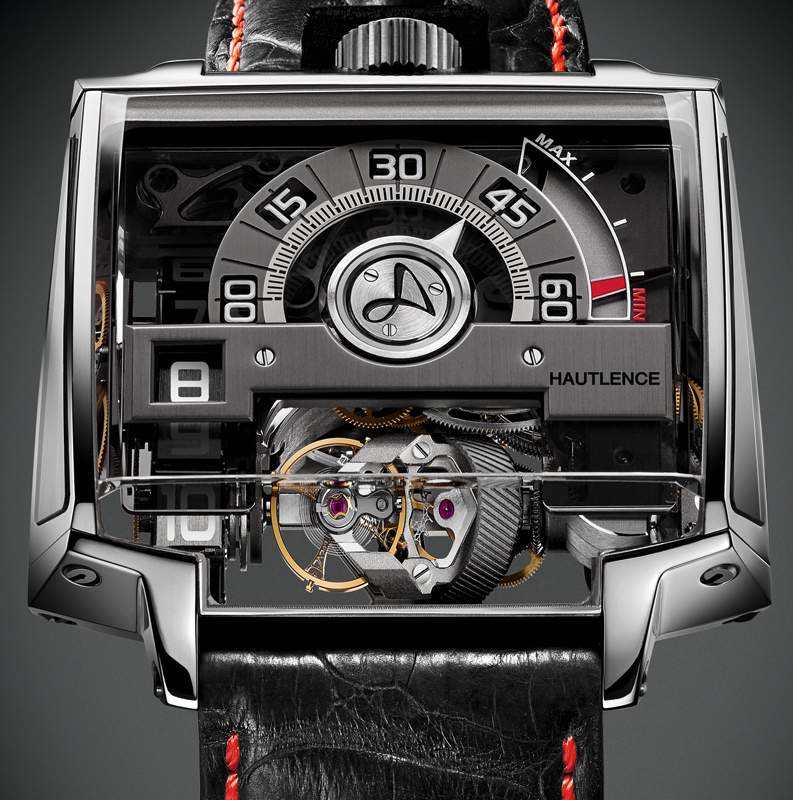 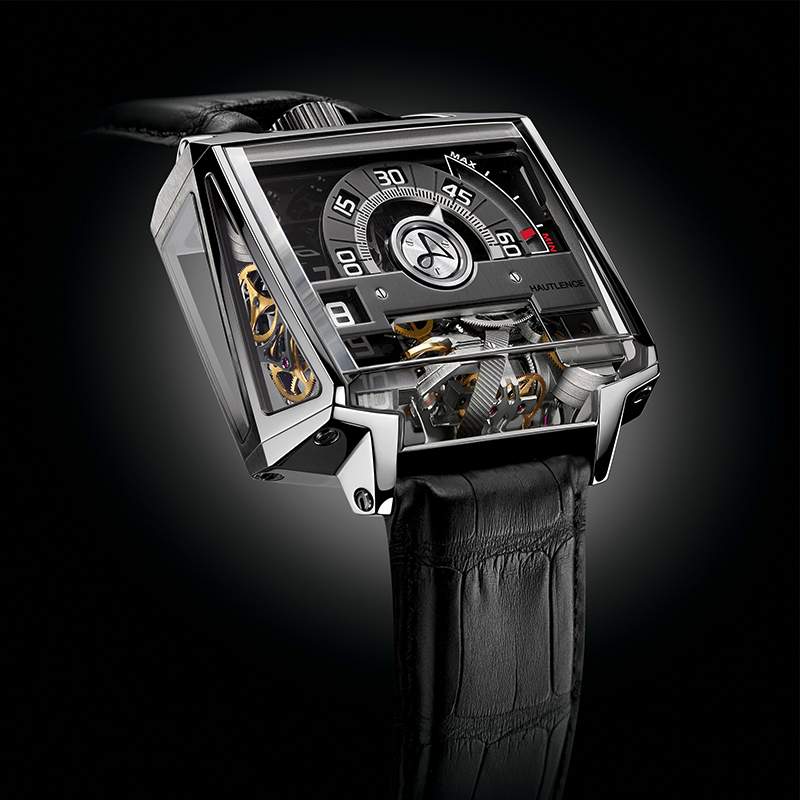 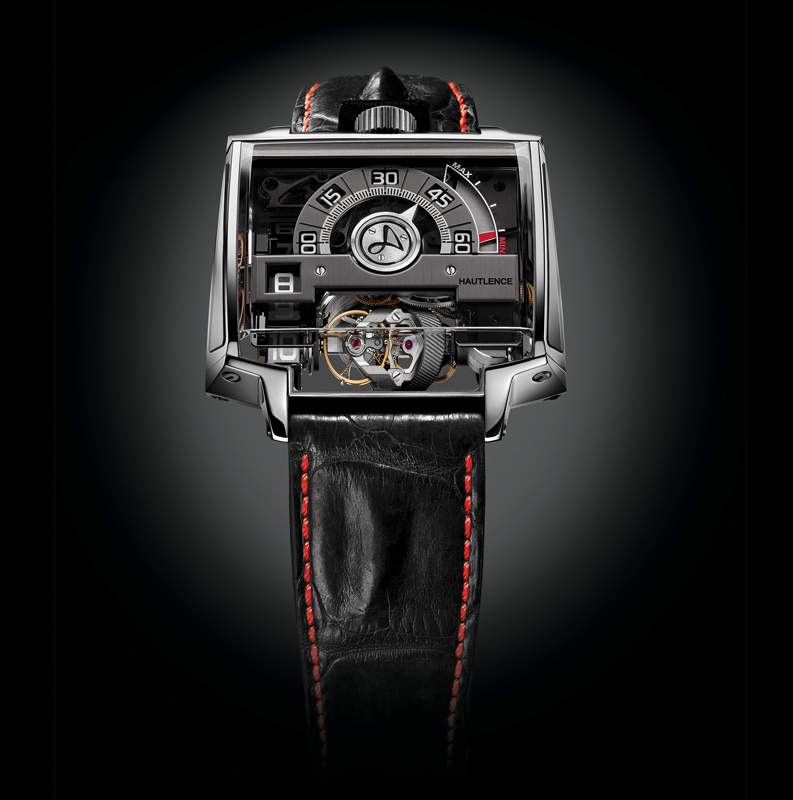 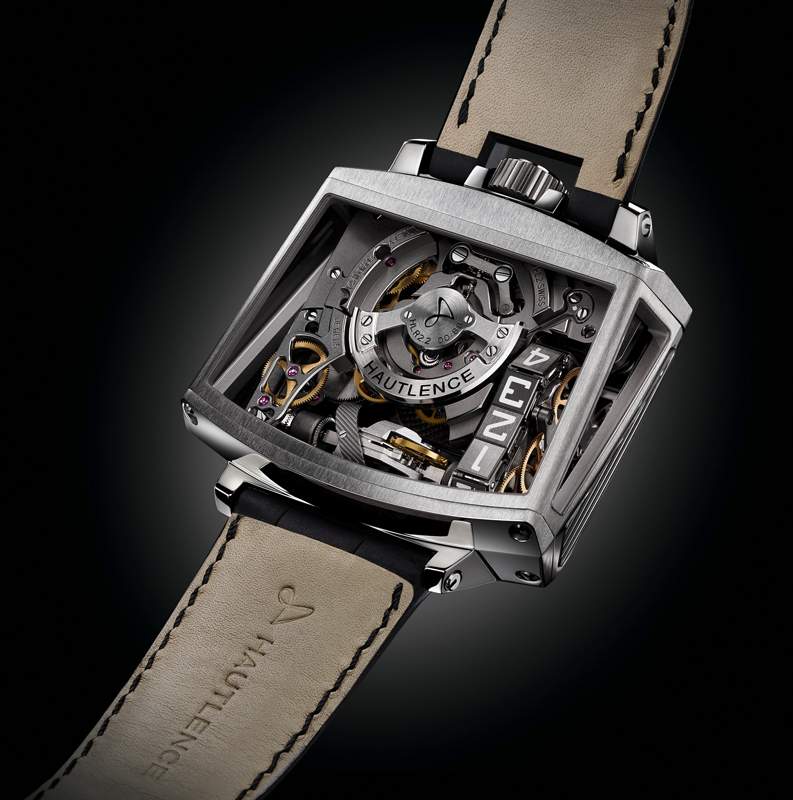 A STEP BEYOND THE FUTURE

The Neuchâtel-based contemporary watchmaker HAUTLENCE unveils its second and highly awaited Concept d’Exception, VORTEX.  First launched in 2010, HAUTLENCE’s Concept d’Exception timepieces are extremely sought-after thanks to their extraordinary displays of time powered by incredible mechanical solutions that push the boundaries of traditional watchmaking. Avant-garde and daring, VORTEX is a true showcase of HAUTLENCE’s boundless creativity and audacious approach to watchmaking, reinterpreting all the design codes that are dear to the brand, such as a multi-level reading of time, materials that play on transparency and the use of nonconformist shapes. VORTEX is much more than simply a wristwatch; it is truly an exceptional timepiece featuring three patents in a mind-blowing three-dimensional case that offers a glimpse of its impressive movement from all sides. Inspired by contemporary architecture, this unique case flaunts a new look every hour as the cage of the regulating organ rotates 60 degrees every 60 minutes, thus turning VORTEX into a mesmerising mechanical piece of art.

“Pushing the boundaries whilst respecting tradition,” explains Founder and CEO of HAUTLENCE Guillaume Tetu while summing up the launch of VORTEX. “The idea behind the watch was to reveal our creative approach to watchmaking in a new Concept d’Exception. Ergonomic, contemporary and truly avant-garde, VORTEX remains true to HAUTLENCE’s design codes with its multi-level display of time, play on transparency, nonconformist geometry and link between mechanics and aesthetics. By combining all of these elements, we have created a watch that is powerful and majestic.”

Limited to 88 pieces, VORTEX displays half-trailing hours, retrograde minutes and a power-reserve indicator. Its futuristic and lively design changes every hour, as the entire regulating organ rotates 60 degrees every 60 minutes. Powering this new timepiece is a redesigned and reinterpreted version of the innovative in-house automatic calibre HR2.0 presented in the first Concept d’Exception. Named HLR2.0, this impressive new calibre is angled at 90 degrees, resulting in a remarkably ergonomic and modern timepiece.

HAUTLENCE collaborated with the prominent Parisian design studio BBDC, Berra Blanquer Design Consultants, to create VORTEX’s eye-catching and state-of-the-art design inspired by contemporary architecture. BBDC is active in many industries and is renowned for having brought to life several bestselling watch designs ever since its foundation in 1996.

“Developing VORTEX was much more than simply a mission; it was, above all, an enriching experience that we shared with Guillaume Tetu and his team,” comments Ludovic Blanquer, designer at BBDC. “We pushed boundaries together, did not make any concessions and studied each and every idea, even the most eccentric ones. Besides giving a designer the feeling of freedom, it is a real proof of trust that helps push the boundaries further while opening up a wide field of creativity. Working on the creation of VORTEX gave us the chance to experiment with technical and stylistic concepts involving every element of a watch, including its movement. We are extremely proud to have had the opportunity to participate in this adventure and to have brought to life, all together, HAUTLENCE’s second Concept d’Exception, VORTEX.”

The case is inspired by post-modern architecture and deconstructivism while remaining true to the DNA of the brand. The innovative case features dynamic lines, facetted structures and radical and disruptive shapes. Crafted out of robust titanium grade 5, the case showcases six three-dimensional sapphire crystals that highlight the complexity of the movement’s kinetic construction from all sides. The sapphire crystals offer a glimpse of the mobile bridge-type calibre and the transparent and protective cage of its regulating organ. Rotating 60 degrees every 60 minutes, the cage of the regulating organ is a reinterpreted version of the one presented in the first Concept d’Exception, the HL2.0, redesigned to increase the visibility of the movement.

The dial provides a two-level reading of time thanks to the semi-transparency of the translucent metallic sapphire dial, portraying the intricacy of the movement’s superior bridges without compromising the readability of the watch’s functions. The dial displays the half-trailing hours, retrograde minutes and a power reserve indicator in a grey colour scheme, reinforcing the architecturally-inspired roots of the timepiece and evoking a metallic and mineral universe. The only dash of colour is seen on the power reserve indicator, displayed in red. The indication of the hours and minutes and the brand logo appear to be engraved directly into the metal.

The bridges of the rotating cage of the calibre were redesigned to feature a futuristic look that stands out from traditional watchmaking. The tense lines and angular shapes of the cage contrast beautifully with the roundness and refinement of the mechanical elements of the regulating organ. The inclined ring is embedded in the bridges of the cage so as to offer a clear view of the regulating organ as it rotates.

The in-house mechanical automatic movement, calibre HLR2.0, is protected by three HAUTLENCE patents, just like the first Concept d’Exception, the HL2.0. The first patent pertains to the 12-link chain of the half-trailing hours, which smoothly turns in 3 to 4 seconds every 60 minutes to display the hour. Such a system differs from an instant system that switches the hours too fast for one to truly appreciate and from a dragging system whereby time cannot be easily read between the hours. The half-trailing hours system rotates effortlessly without losing energy and offers the possibility to admire the beauty of the movement and its mechanisms in action. The second patent relates to the regulating organ integrated into the mobile bridge-type movement. Its constantly changing position, driven by the display, compensates statistically for the effects of gravity, thus enhancing its precision. The third patent concerns the operation of the movement’s two barrels. The main barrel is wound by the automatic-winding system of the movement and transfers the necessary energy to wind a second barrel that is dedicated exclusively to driving the complication. The main barrel continuously winds the second barrel so as to ensure that energy remains at an optimal level to change each hour. This ensures that complex systems remain powered independently without impacting the precision of the watch.

VORTEX is available with three elegant straps that can be easily interchanged with a screwdriver that is included in the box. VORTEX comes with a black Louisiana alligator leather strap with large square scales, a black hornback crocodile leather strap with red topstitching or a black rubber strap, each equipped with a folding clasp in grade 2 titanium with a palladium plate.

VORTEX will be available starting this September. Demonstrating HAUTLENCE’s endless imagination and daring vision, this second Concept d’Exception is limited to 88 numbered pieces.

A brand-new chapter in HAUTLENCE history

Ever since its foundation in 2004, HAUTLENCE has been dedicated to bringing a new dynamic into the art of watchmaking, thus gaining the recognition of watch collectors and connoisseurs the world over. The brand has a portfolio of four calibres designed and manufactured in-house and relies on external partners for the movements of certain collections. HAUTLENCE launched the HL calibre in 2005, followed in 2009 by the HLQ calibre, with the brand’s third calibre, the HLC, hot on its heels in 2010. The following year saw the introduction of the high-flying HL2.0 calibre in a variety of different versions. Since 2012, HAUTLENCE has enjoyed the support of MELB Holding, which has made its experience and network accessible to the brand with the aim of developing effective synergies between HAUTLENCE and the group as a whole.

Like its name, an anagram of the brand’s hometown of Neuchâtel, HAUTLENCE is renowned for turning things upside down. The brand has challenged the boundaries of traditional watchmaking designs by drawing on its architecturally-inspired roots and uniting them with innovative mechanical solutions borrowed from other industrial worlds.  Acutely aware of the two essential dimensions of time and space, HAUTLENCE is driven to design timepieces with original lines and multi-level dial constructions that provide incredible depth.

HAUTLENCE timepieces are created and produced in the purest Swiss watchmaking tradition and carry the label “HORLOGERIE SUISSE” on the case back. Aside from the straps/bracelets, certain high-tech components and sapphire crystals, all parts are developed, produced, decorated and assembled in the Neuchâtel and Jura mountains of Switzerland.