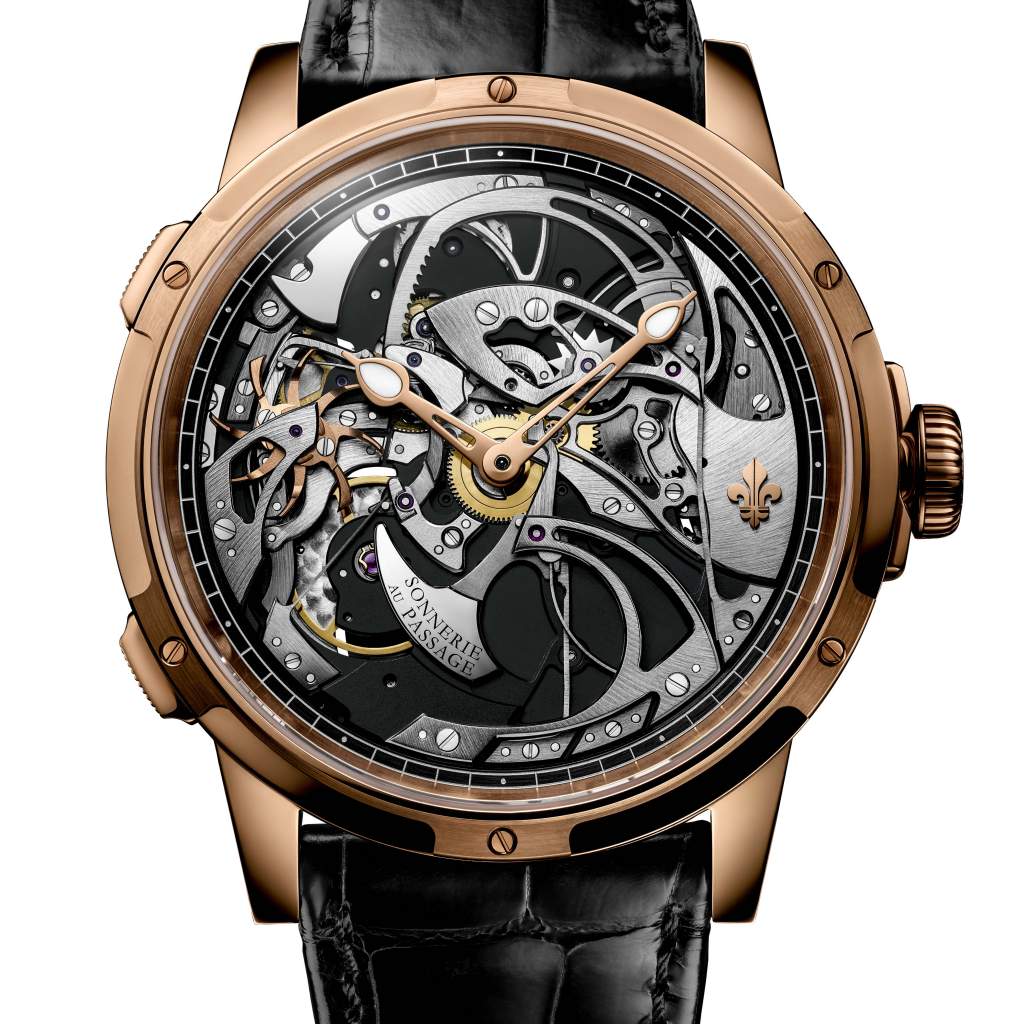 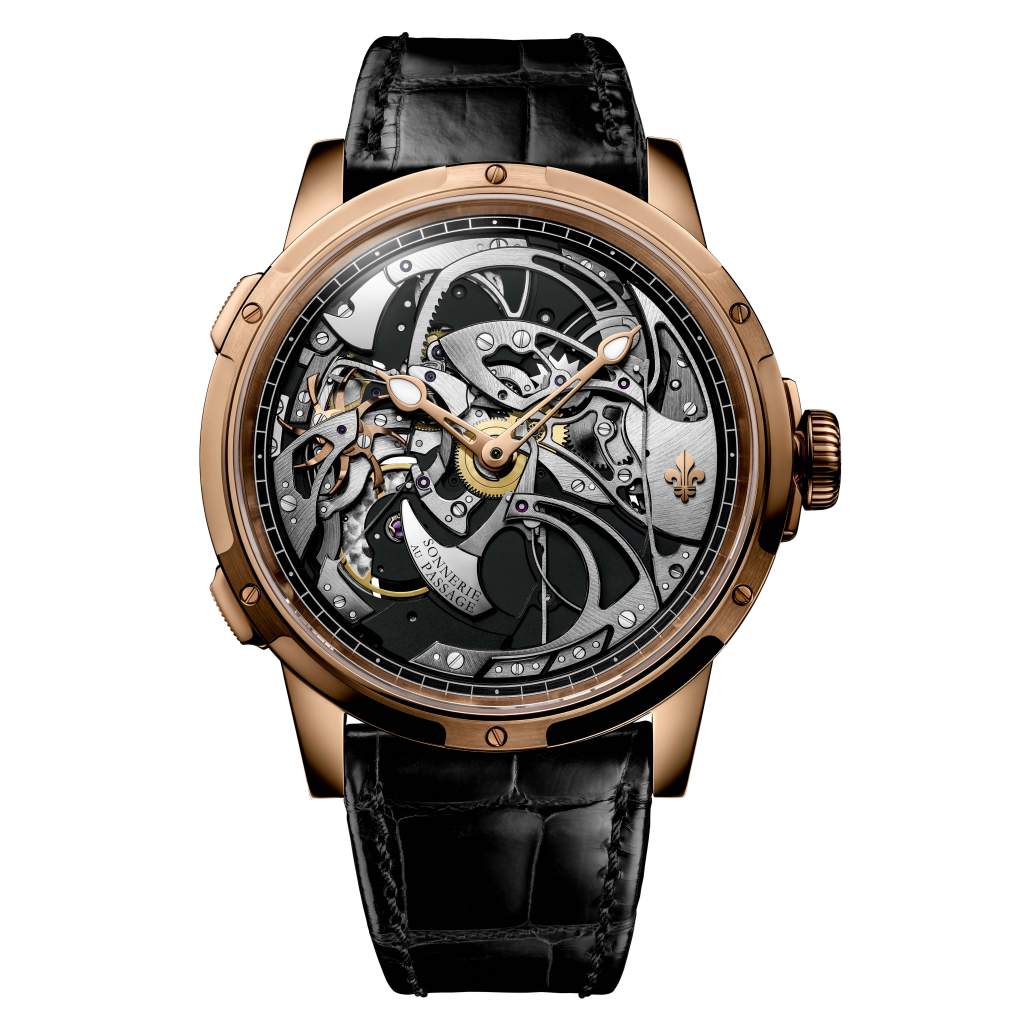 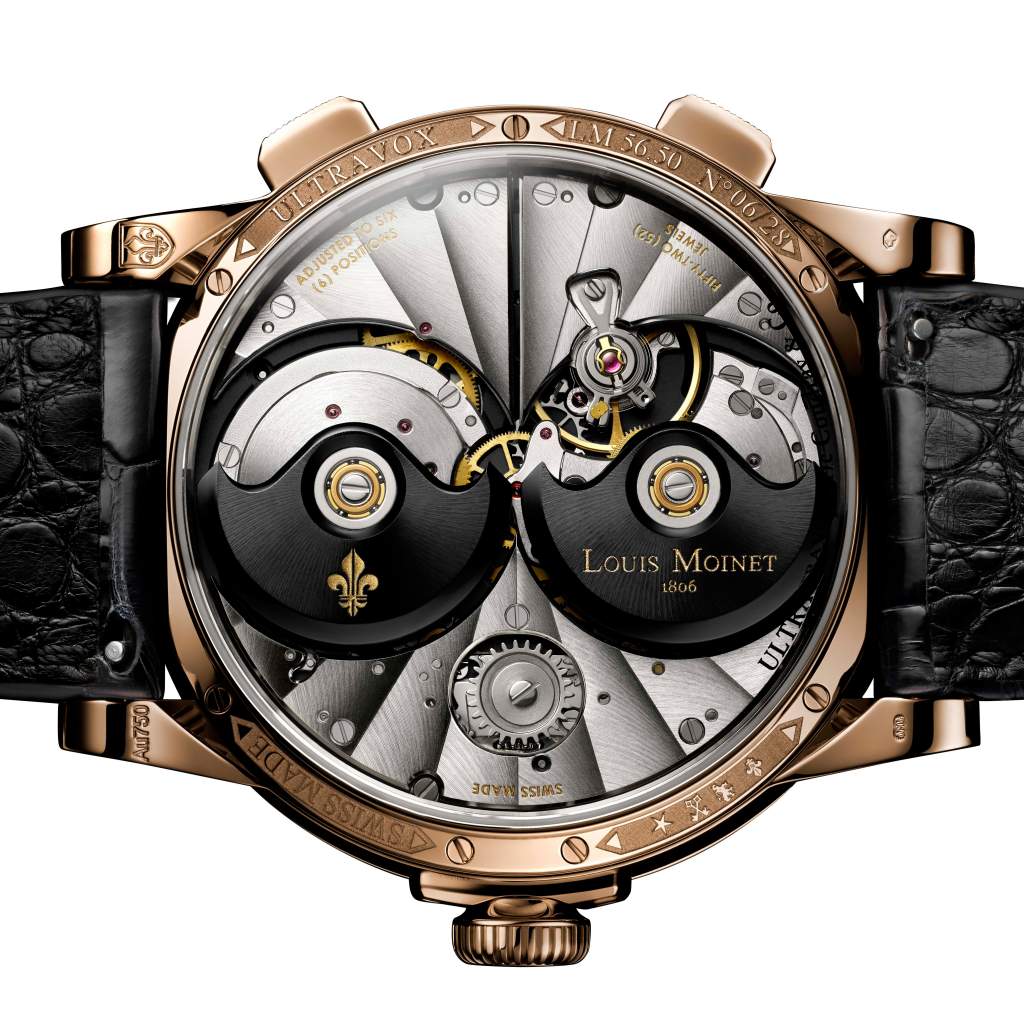 The first Hour-Strike with a visible mechanism

In the nineteenth century, Louis Moinet’s clocks sounded out the hours of some of the world’s greatest leaders, including Napoleon Bonaparte, Tsar Alexander I, and US presidents Thomas Jefferson and James Monroe.

ULTRAVOX was designed to celebrate the 250th anniversary of Louis Moinet’s birth. It’s an exclusive creation by Eric Coudray, one of the greatest contemporary designers. He has developed a so-called “flirt” strike mechanism – much rarer than the timing wheel system.

This strike mechanism allows each hour to be sounded on the hour, with the appropriate number of chimes. A silencer mechanism also allows the wearer to disengage the chime, if they so wish.

The hour-strike is an extremely rare complication, and the layout used for ULTRAVOX is unique, with the mechanism revealed in its entirety. Having it visible on the wrist allows all its beauty and complexity to be admired.

Precisely on the hour, the flirt, located at 6 o’clock and engraved with the words “sonnerie au passage”, is engaged, striking a gathering pallet that in turn releases the strike hammer. This is the departure signal: as if by magic, the whole, unique cadrature comes to life. The inertia braking flywheel (located at 9 o’clock) comes into play, regulating the rhythm of the strike.

A wolf-tooth gear is also integrated into the ULTRAVOX cadrature. Each time a tooth passes over the strike hammer’s gathering pallet (located at 11 o’clock), it engages the hammer. The hammer then strikes the gong, arrayed around the movement. It took over one year to put the finishing touches to this gong, including geometry and length trials, to ensure the metal would produce a truly characteristic sound.

The mechanism is placed directly onto the plate of the one-piece movement, guaranteeing its quality. The highly complex plate features over 50 jewels, its black colour offsetting the block-polished, chamfered screws beautifully.

The movement has two sets of gears. The first is for the hour movement mechanism, the second for the strike mechanism. These two distinct automatic wind systems are both directly inspired by the perpetual watches of the eighteenth century.

To the rear sits an innovative parallel double rotor system. One rotor powers the hours and minutes mechanism, while the other is dedicated solely to the strike.

The 18-carat rose gold case is an original design, displaying Louis Moinet’s signature on the caseband. The lugs are decorated with black zircon and a screwed setting. The two-part bezel is a hallmark feature of the brand, with its 6 screws fitted at a 17-degree angle. The two sapphire crystals have been treated with a non-reflective coating on both faces.

The Latin name ULTRAVOX – “the ultimate voice” – is a nod both to the strike mechanism and to the neoclassical creations by Louis Moinet himself, including clocks portraying figures such as Minerva, Julius Caesar, and Cicero.

Ateliers Louis Moinet was founded in Saint-Blaise, Neuchâtel, in 2004. The fully-independent firm was established to honour the memory of Louis Moinet (1768-1853): master watchmaker, inventor of the chronograph in 1816 (certified by Guinness World RecordsTM), and pioneer in the use of very high frequencies (216,000 vibrations per hour). Louis Moinet was a watchmaker, scholar, painter, sculptor, and teacher at the School of Fine Arts – as well as the author of the Traité d’Horlogerie, a watchmaking treatise published in 1848 that remained a definitive work of reference for a century.

Today, Ateliers Louis Moinet is perpetuating this legacy. The firm’s timepieces, produced in limited editions only, have won some of the most coveted honours, including a UNESCO Award of Merit, five Red Dot Design awards (including one Best of the Best award), gold and bronze medals in the Chronometry Competition, eight Good Design awards, three Middle East Watch of the Year awards, two Robb Report “Best of the Best” awards, a German Design award, a Moscow Grand Prix award, and a “Chronograph of the year” distinction from Begin Magazine, Japan. Louis Moinet creations often make use of unusual materials, such as fossils and meteorites, combined with bespoke fine watchmaking complications in a unique creative approach. The brand’s core values are creativity, exclusivity, art and design.