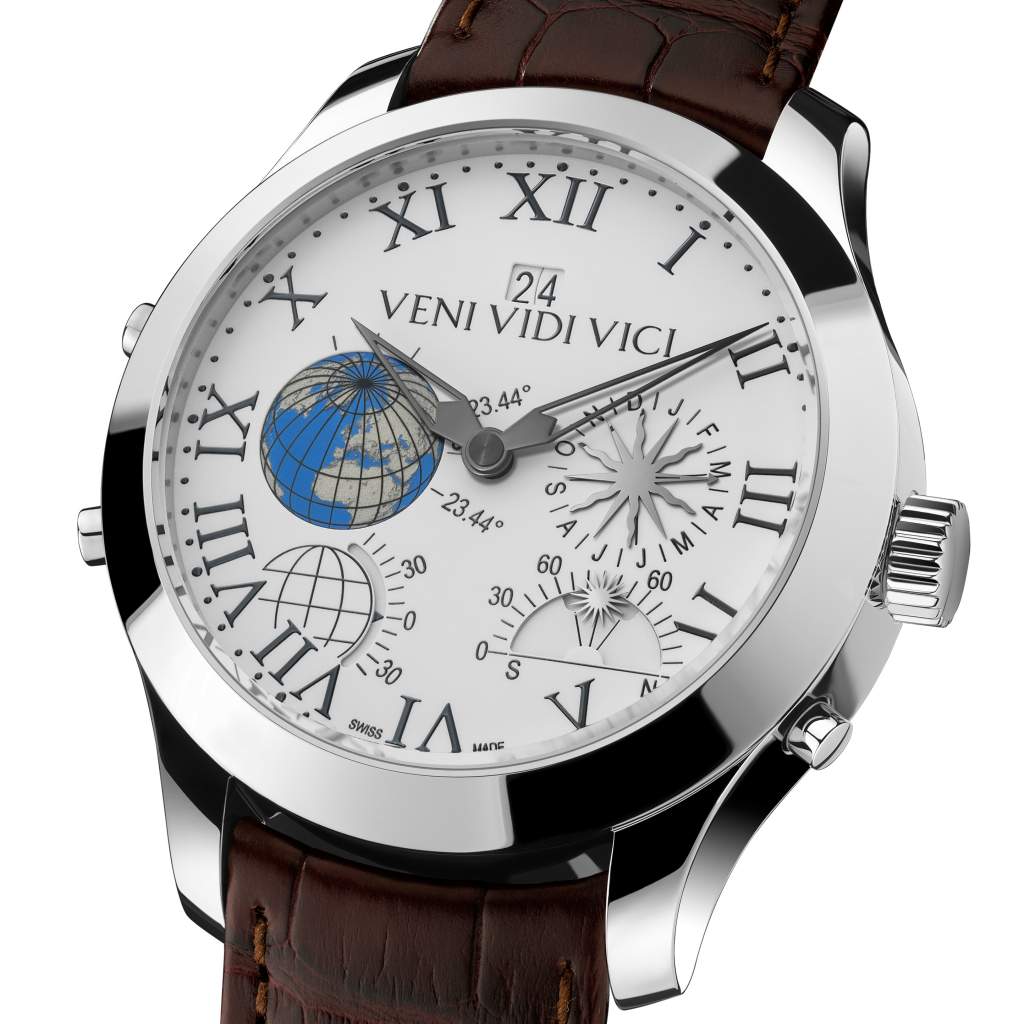 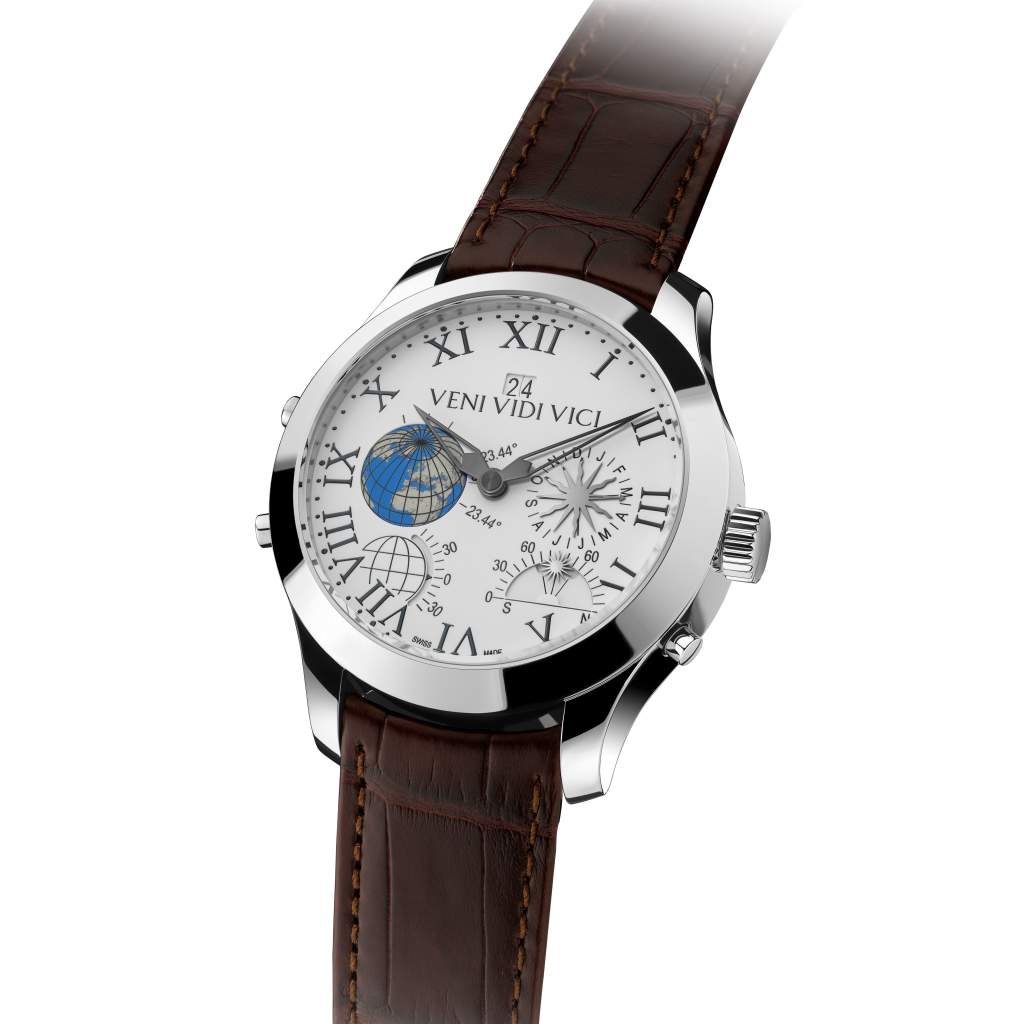 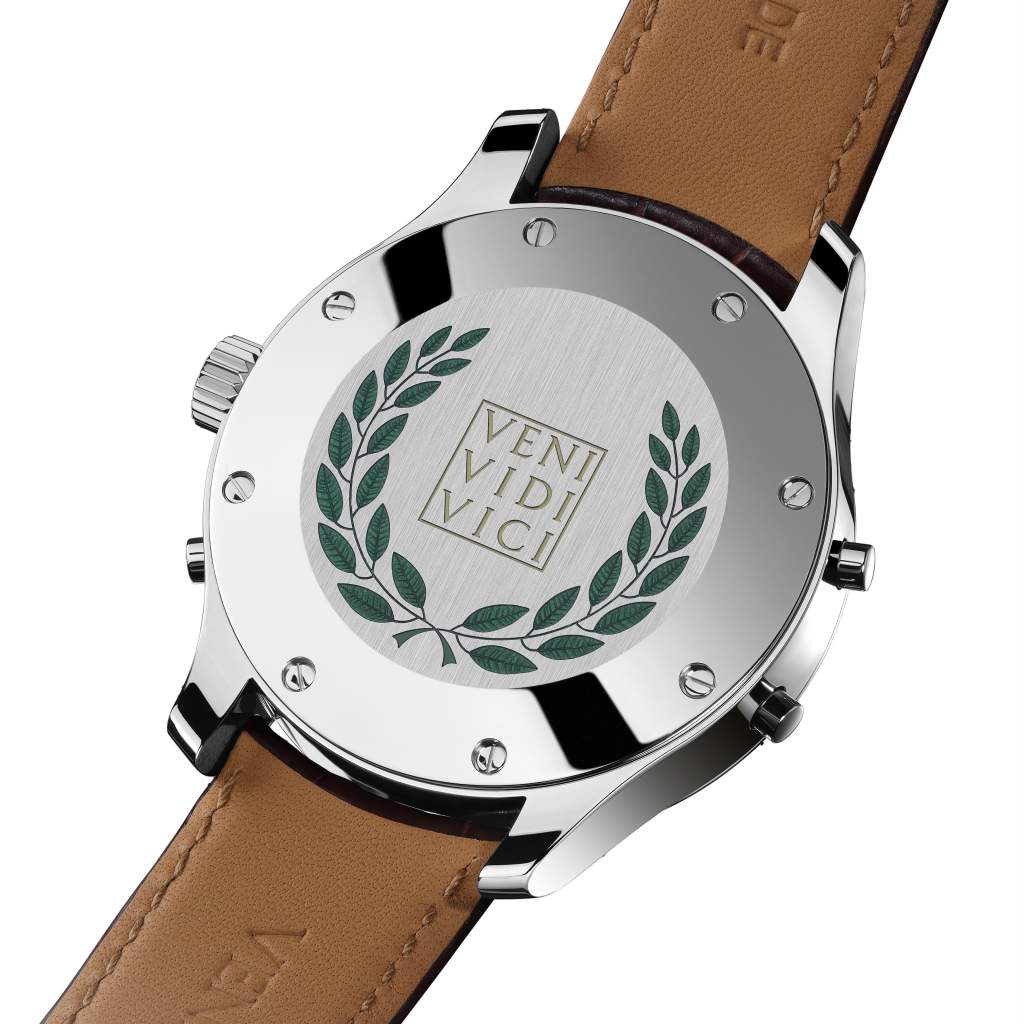 The skilled person or scholar, when he discovers a new watch, asks himself the following questions : what are the visible indications, how does it work and how to make such a mechanism? His knowledge and experience allow him to answer.

VENI VIDI VICI presents the first complication that reveals the subtle dance of the Sun and the Earth.

The year goes by and the seasons follow one another. The Earth rotates around the Sun and it rotates about its axis; however, the Earth's axis is not parallel to the Sun's axis. It is the existence and maintenance of this natural inclination that causes the succession of seasons through the displacement of the planet on its orbit.

During the Earth's race around the Sun, singular astronomical events occur : equinoxes and solstices.

Thus from the spring equinox to the autumn equinox, the sun is above the equator, the northern hemisphere receives more light and temperatures are higher. From the autumnal equinox to the spring equinox, the sun is below the equator, the southern hemisphere receives more light, which corresponds to the southern summer.

The modification of the angular height of the Sun in the sky at noon during the passage of the meridian is another effect that every man experiences on a daily basis. A height that varies throughout the year and depends on the location of observation.

This phenomenon is experienced by every inhabitant of the Earth on a daily basis. Yet few people can easily explain how the Earth and the Sun interact.

To design the mechanism that describes these astronomical phenomena, Jean-Pierre Horvath, the inventor of the complication, needed 11 years to understand the effects of the Earth's movement around its star, the Sun.

For the first time, a watch makes it possible to see, explain and show the evolution of the relationship between the Sun and the Earth.

The complication includes 5 indications : the date and month that are known, the solar declination and height of the Sun at the passage of the meridian that have never been realized and the latitude for its universal use.

Extreme attention during the design phase has made it possible to obtain a refined design and optimal readability while guaranteeing daily comfort of use.

The date is indicated through an aperture at 12 o'clock, the month is represented by a Sun at 3 o'clock which moves day after day on the month scale, an arrowhead shows the period of the active month.

The solar declination is represented at 9 o'clock by a planisphere according to an orthographic projection of the Earth; it oscillates by ± 23.44°.

This arrangement makes it possible to visualize which hemisphere of the Earth is illuminated by the Sun during its oscillation.

Throughout the year, the Earth's axis changes orientation with respect to the Sun. Thus, in winter, the southern hemisphere receives more sunlight and in summer it is the northern hemisphere that the sun shines the most.

At 5 o'clock, a second Sun indicates the angular height of the Sun at noon by means of a disc containing three marks : the one at the centre indicates the equinoxes and the other two ones indicate the solstices. At 7 o'clock there is a latitude indicator corrected by two push-buttons on the left side of the watch; pressing one of the push-buttons changes the latitude, which changes the indication of the height of the Sun.

The angular height of the Sun depends on the day of the year and latitude. For a given latitude, the sun will change height every day and will pass from one solstice to another in a year.

If the user presses one of the push-buttons on the left of the box, he can choose a latitude between 60° north and 40° south in 5° steps. Thus, the small Sun and the disc below will indicate the height of the Sun for the chosen latitude and the extreme limits reached during the solstices.

Particular care has been taken to ensure that the settings, even after a long stoppage, are as easy as possible and do not require any special knowledge. To reset the watch to the current date, simply change the date with the crown, as on most watches, and the month using the push button located at 4 o'clock.

The date is indicated through a window at 12 o'clock, the month is represented by a Sun at 3 o'clock which moves day after day on the month scale, an arrowhead shows the period of the active month.

The month setting push button allows the watch owner to play a full year and see or show how the inclination of the Earth will change as well as the height of the Sun. The latitude adjustment push-buttons are used to understand the angular height of the Sun if the user is going north or south.

This ability to change either the date or the latitude offers the user an exceptional experience and allows him to see the evolution of the Earth's inclination and the height of the Sun during the year for a place of his choice.

Seeing what is invisible

The photo shows the watch using the example of March 22nd for the equator; it corresponds to 2 days after the Spring equinox which took place on March 20th in 2019. This date coincides with the time when the northern and southern hemispheres receive the same amount of light for the same latitudes, it is the time when the length of the day is equal to that of the night and that particular day, the sun is at its zenith at noon at the equator.

Each date describes a particular situation of the inclination of the earth and each latitude a specific vision of the height of the Sun in the sky. For example, for inhabitants between the Tropics of Cancer and Capricorn, to see the Sun, they will look either north or south depending on the date, the ones who are south of the Tropic of Capricorn will always look northward at the Sun's course, unlike inhabitants of the northern Tropic of Cancer who will observe the Sun from southward.

The complication shows which direction to look in order to see the Sun travel in the sky.

In the photo, on March 22nd, the Earth leans to the right and the northern hemisphere begins to receive more Sun. The Sun at 5 a.m. is no longer at its zenith and a resident at the equator will look for the Sun in the sky towards the north, as indicated on the dial.

The complication is in the form of an additional module. It consists of a plate and 2 bridges decorated with rhodium-plated Geneva sides. The axes rotate through 24 jewels to ensure perfect operation.

The initials AH engraved on the 6 o'clock bridge are those of Axel Horvath, the son of the creator of the complication and who carries out the assembly of the module, the fitting and all the quality controls.

A showcase for a new complication

Rare for a complication, the 41 mm diameter and 12.7 mm thick case is made of steel, the experienced collector knows the rarity of these models and the guarantee of the investment that it represents.

The production of steel models is limited to 100 pieces. Precious metal models will follow and will be available according to other quantity criteria.

Different versions of the planisphere are available : the one presented is intended for European customers. The versions for the Near East, Far East and North America are available. Other orientations can be carried out on the customer's request.

State-of-the-art production facilities have made it possible to achieve this complication. For example, the Earth is a curved surface on which the relief of the continents is visible while it is only 9.5 mm in diameter, a technical feat.

The realization of the planisphere consists of a 2.5D texturization entirely engraved with laser, gold for the lands and galvanic treatment PVD blue for the oceans, a bi-color realized by laser ablation.

To highlight the details of the planisphere, a cyclops magnifying glass is available. Equipped with the cyclops, the total height of the watch increases by 3 mm, bringing it to 15.7 mm

On the background, translucent hybrid ceramic covers the laser-textured laurel leaves in colour. The golden colour at the bottom of the VENI VIDI VICI engraving is not a galvanic deposit or a lacquer, it is a laser colouring and structuring that reproduces the diffraction phenomenon as on the wings of certain butterflies.

A nod to Geneva

At the base of the Island Tower is the plaque commemorating Julius Caesar's passage to Geneva and the first mention of the name Geneva. It was Julius Caesar who pronounced VENI VIDI VICI after a quick victory.

This complication also pays tribute to the creators of the oldest known astronomical mechanisms : the Anticythera machine and Giovanni Dondi's Astrarium. These mechanisms were intended to show and explain our world.

Time will decide whether this new complication will be accepted as a new milestone in the long history of watchmaking.