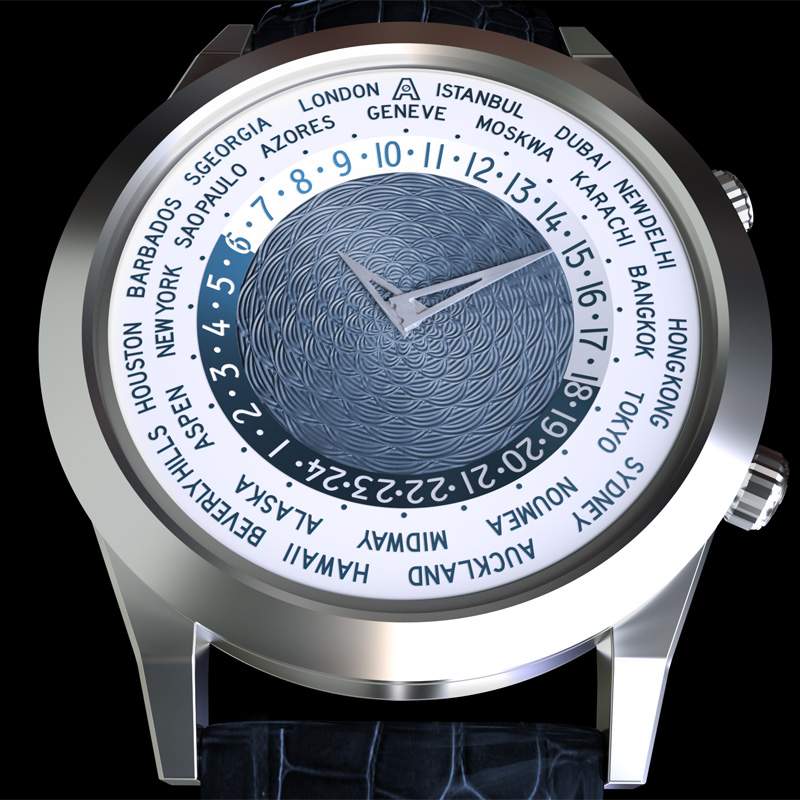 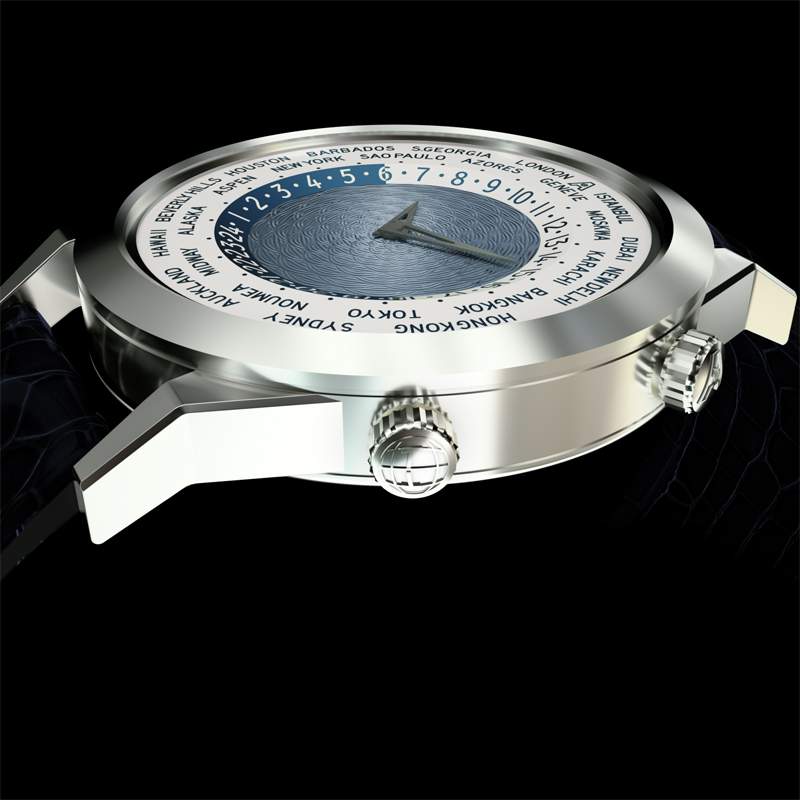 The time zones indication has been continually optimised since Andersen Genève’s first World Time watch 25 years ago, in 1990.

The Tempus Terrae "25th Anniversary" is proposed in a limited edition of 25 pieces in yellow gold (2N), 25 in red gold (4N) and 25 in white gold. It celebrates 25 years (1990-2015) of World Time Watches with indication of different time zones by Andersen Genève.

The Tempus Terrae carries Andersen Genève’s DNA adorned by watch collectors: a very sober and classy watch case in gold with aesthetic simplicity. The centre of the dial is made of exclusive "BlueGold" that Andersen Genève has been mastering for decades. It is a 21ct gold with iron elements in it. Once heated the gold gets an exclusive blue colour that reflects light in a very special way. No two dials get out of the oven with the same colour making every dial unique. The hand guilloché Scale texture empowers light reflexion too. It is an extremely difficult texture to handcraft.

In order to let the BlueGold dial shine as much as possible, the "Andersen Genève" logo was removed from the centre of the dial and replaced by the "A" logo on the outer ring of the dial, the so called "City Ring", above GENEVE. Brushed "A" shaped Andersen hands are also part of Andersen Genève’s DNA. They remain as discreet as possible though give a clear visibility of time.

The Tempus Terrae has two crowns. The first one with the "A" logo will set the time (minutes and hours). The second one with a "TT and a globe" logo will be used to set the reference time zone, i.e. the corresponding city, where the user is leaving (or travelling).

All 5 editions of World Time watches have a detail in common: on the "City Ring", "Moskwa" is written instead of Moscow. In the past, Andersen Genève used to write the names of the cities in their own languages. Afterwards every city was written whether in French or in English excepted "Moskwa" which is Moscow but written in Russian language. This detail remained on every World Time watch in honour to Russian collectors who have been loyal customers for decades.

The Tempus Terrae offers personalisation alternatives; bespoke options have been offered by Andersen Genève since the beginning in the early 80’s. Whether with a special city name or a special text colour on the dial, the watch collector can make his watch unique.

The owner can also have a "secret" inside his watch (or the watch he is offering!). He will have the opportunity to engrave his desired text inside the hunter case back cover. The text (or any logo, or coat of arms, or ...) will appear once the cover is opened (at an 85° angle).

Once the case back cover is opened, the decorated movement with "Côtes de Genève" and "Perlage" will be visible under the sapphire glass. The owner will be happily surprised to find yet again a BlueGold hand guilloché Scale texture on the rotor; the same decoration as on the dial.

No compromise is made on quality. Therefore, every component of this watch is yes produced in Switzerland, whether in the atelier, in Geneva or Neuchâtel, with the help of passionate high-end craftsmanship.