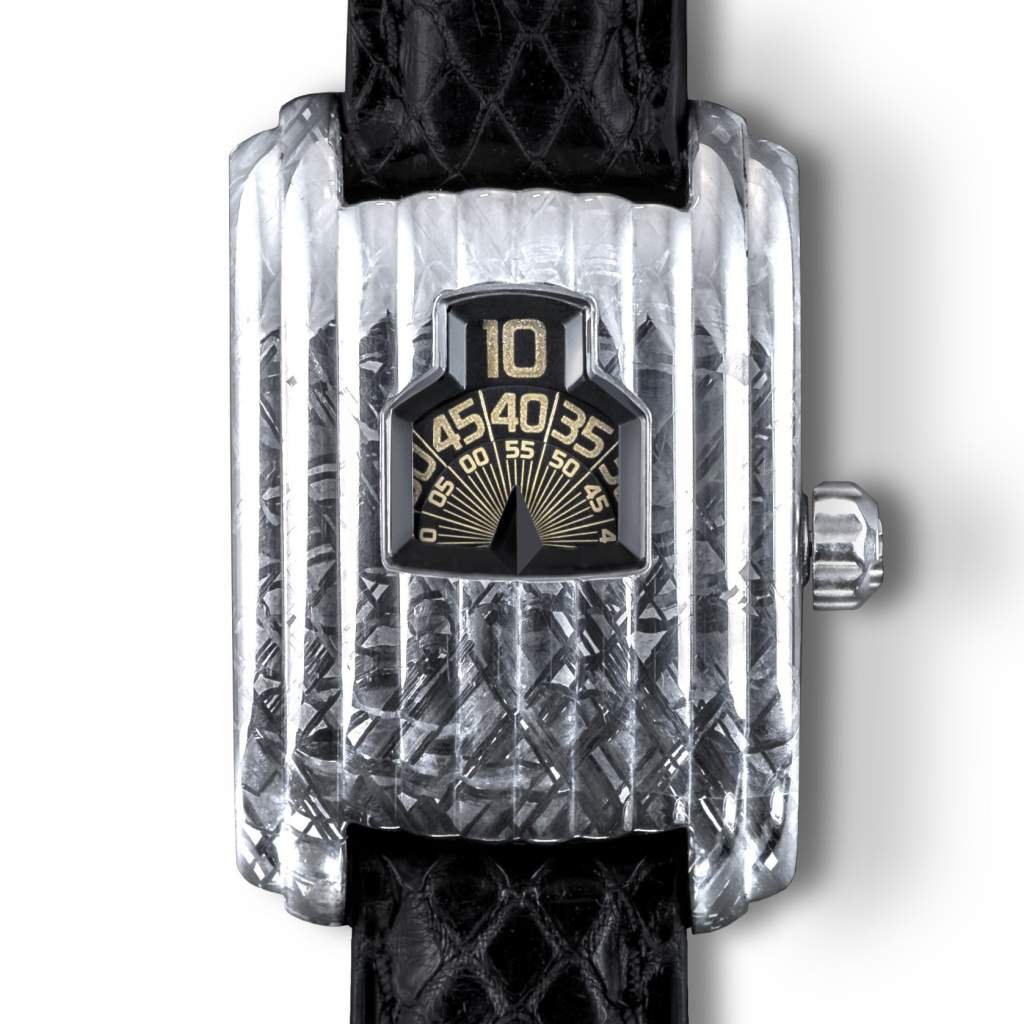 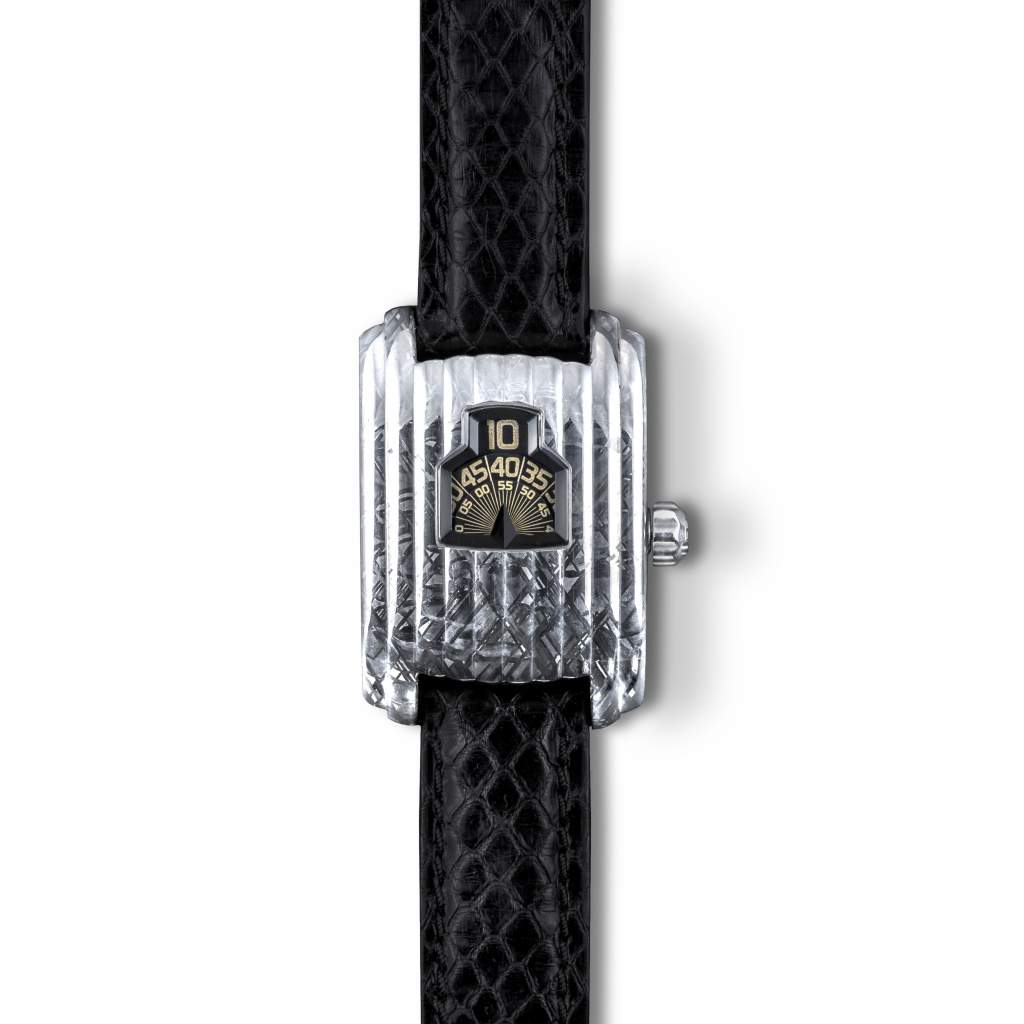 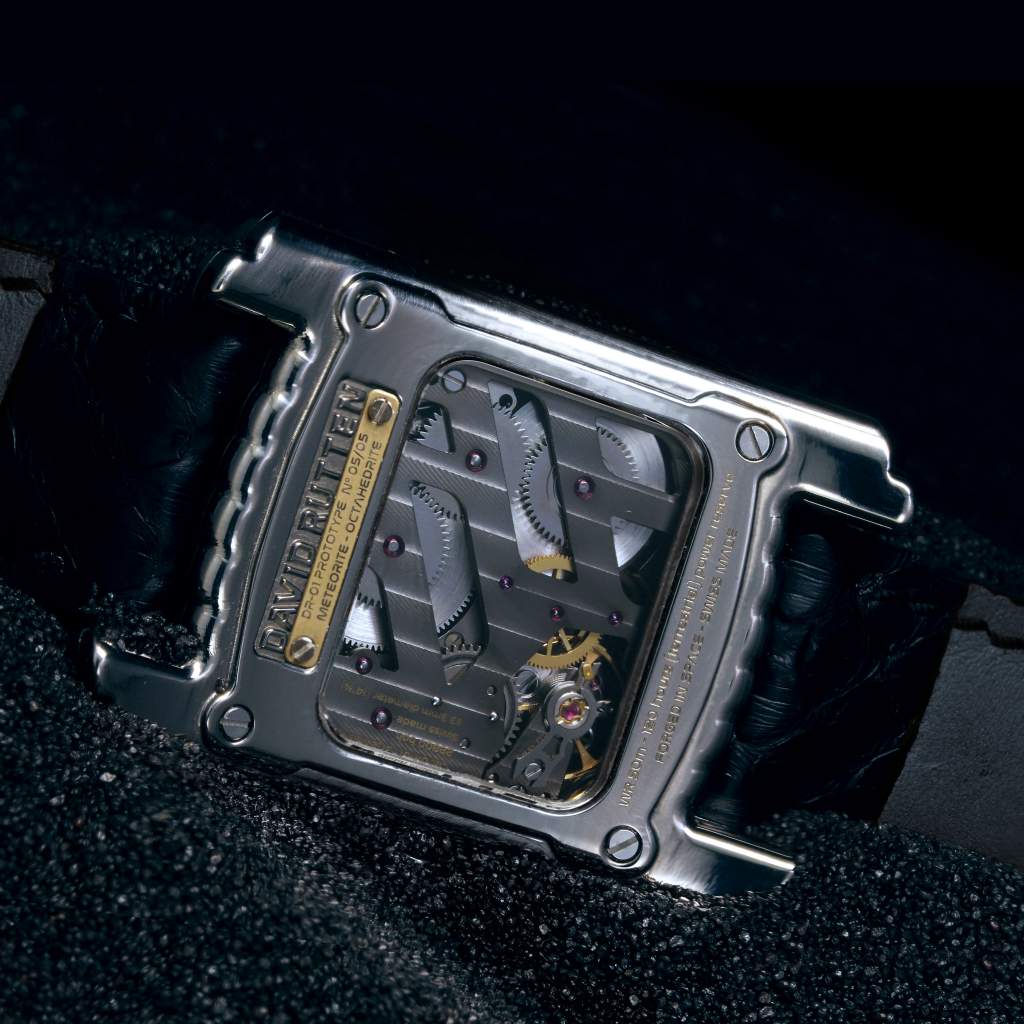 You all know the old maxim : “Space, the final frontier”. It has been one of David Rutten’s leitmotifs ever since he started creating. As a space and watch enthusiast, he has spent decades maturing and designing the project that we invite you to discover. His intention was to bring about something new to the business: a brand based entirely on cases composed of an untapped material: iron meteorite.

The extreme rarity of the octahedrite, as it is called, is not only due to its random collection method (there are about 3 tonnes of metal meteorite falling on the earth per year, compared to 3,000 tonnes of gold from the mines each year). It also presents a unique aspect, in the heart of its alloy of iron and nickel. Those metals merged in weightlessness, cooling down for billion years during the creation of the universe. They form into a crystal pattern, diamond-shaped, found on earth in precious stones. The meteorite that we will use for this first model is the Muo Nio Nalusta, a meteorite fallen about a million years ago in Scandinavia and discovered in 1906. Its genesis actually goes back 4.56 billion years, which makes it the most ancient metal on the face of this planet, as it dates back to the early days of our solar system.

For his first model, the DR01 “Streamline”, David Rutten thought up a design that honours this extraterrestrial metal. He reinterpreted a classic of Art-deco, the guichet watch, in order to minimise the reading area, leaving maximum space to the cut meteorite (yes, each case will be unique as we use a natural metal). If the dial steps aside, ergonomy remains a central element of creation. The aperture is large, in order to ensure optimum readability for all. This is possible because we have opted for a generous size of 37mm in width.

In this rather mysterious design, the dial is replaced by discs, a jumping outer hour disc and a dragging one for minutes and central seconds. The hour is read in line, from the top to the bottom, H,M,S. The hour jump is immediate, the jumping hour jumps rectilinearly, with a noisy “clack” so you can hear hours go by.  Our exclusive mechanical caliber enjoys a contemporary conception, even if its features are traditional: manual winding, 120-hours power reserve, frequency of 4hz (28800 bph), 33,3mm diameter, côtes de Genève decoration, Ruthenium treatment. This movement, as well as the case, are Swiss-made, the meteorite is “Forged in space”.

This principle of minimalism is also reflected in the offer: this model will be proposed by subscription for the launch of the brand. We want to democratize the streamline experience among as many enthusiasts as possible. In the course of this launch subscription, the 88 pieces will be available for 9850chf.

Our aim is to provide more than a watch: a work of total art, a piece of Space on your wrist, a direct witness of the cyclopean creation of our solar system that will take you on a trip beyond watchmaking, to infinity.

In the following points, we develop our creative approach :

•    David Rutten is a Belgian designer, originally not a watchmaking insider. He was trained at La Cambre. He is inspired by space and Art-Deco, Streamline, Victor Horta, Brutalism, Japanese mangas, retro science-fiction.

•    Malik Bahri is a watchmaking blogger, he has worked for many brands and he brings his watchmaking expertise.

•    Our concept is to manufacture timepieces made of meteorite, not starting from watchmaking to incorporate meteorite, but instead starting from meteorite to turn it into a watch. Likewise, rather than making astronomical watches starting from a terrestrial point of view, it is about space seen from space.

•    The watch is built around the caliber, there are 2mm of meteorite on each side of the 33mm caliber. The watch is 37mm wide, 53mm with lugs and 12mm thick.

•    The comfort experience :  the watch is sharply curved with lowered lugs, so it can fit any wrist. The python wristlet is both thick and very flexible, and contributes to the good support of the 120 grams on the wrist.

•    The caliber decoration experience : the opened bridges are treated with ruthenium and cut according to the octahedron pattern of the meteorite.

•    The readability experience : David Rutten developed his own indexes font. The production version will profit from a great contrast between the bright yellow indexes and the deep dark disks.

•    The storytelling will focus on space and the numerous news related to it.

•    Marketing : direct distribution, Internet-based communication, sponsorship system (10% reduction by sponsorship) in order to foster the emergence of the community. The customers who will pay for the Streamline from first days of the subscription are offered a 10% reduction.

Thanks for your time.