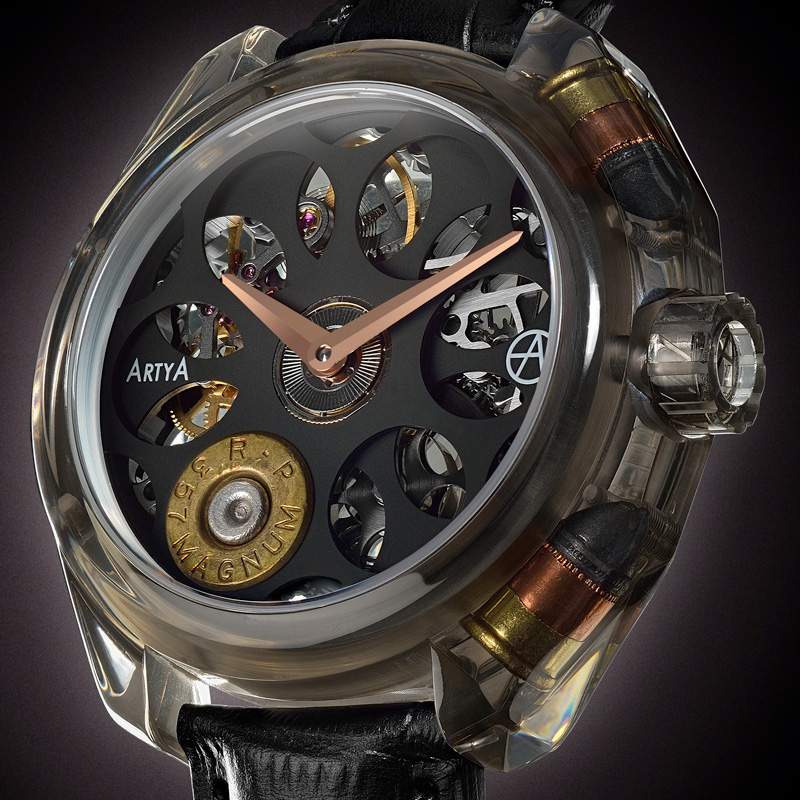 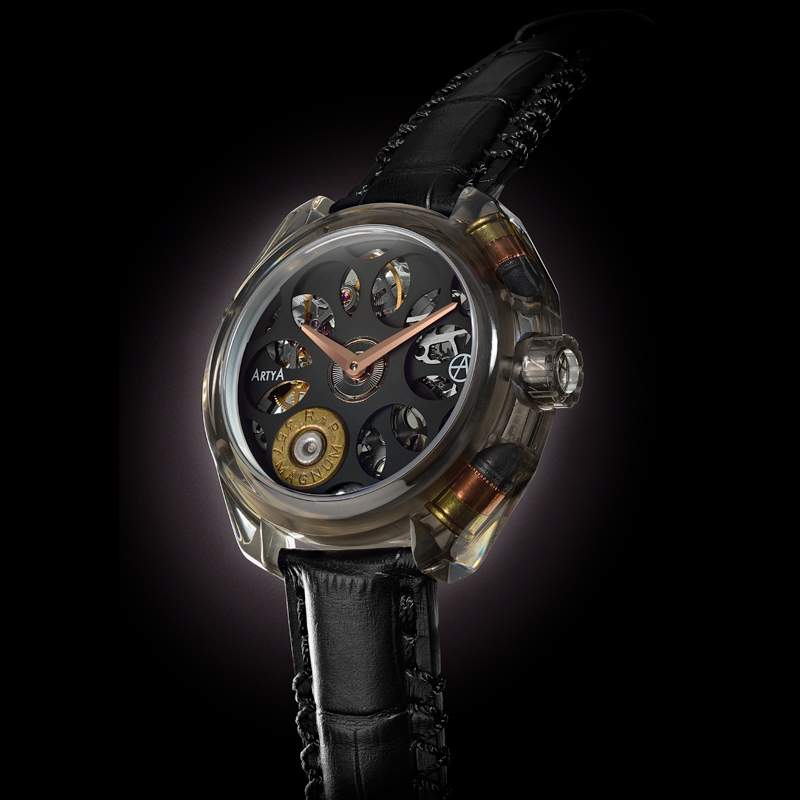 Ideas change, as do fashions, and technology moves on. And some watchmaking concepts are out there in the collective unconscious, simply waiting to be brought to life through the use of new technology. With the unveiling of the Son of a Gun ‘Glasnost G1’, one such major development has now emerged – a completely new creation made possible thanks to recent industrial progress.

Two real bullets – right next to your skin

The Son of a Gun concept remains unchanged. Originally the brainchild of ArtyA’s CEO and designer Yvan Arpa, it brings together the concepts of life and time – urging us to make the most of both, reminding us that we’re not here for long, and keeping us aware of how fragile we are. By capturing bullets and diverting them away from their intended purpose, ArtyA neutralizes them. By associating them with time and with a timepiece, ArtyA stops their otherwise fleeting trajectory in mid-flight. The bullet is halted, even as time marches on: Son of a Gun is thus an invitation to everyone to think about how they approach life.

With the Russian Roulette Glasnost G1, ArtyA is holding unswervingly to its creative course. Two bullets are located inside the main body of the watch, so that they really are worn on the wrist. A new process – never before used in watchmaking – has made it possible to encase two Flobert 6 mm bullets within the frame of the ITR2 case, placing them in virtually direct contact with the skin. The bullets are suspended, motionless, as though frozen mid-shot, but their apparent trajectory brings them closer than ever to the wearer – as though they’ve been fired at point-blank range.

“The idea of locating bullets outside the main body of the watch had been around for some years, but the relevant technology was not yet sufficiently mature,” says Yvan Arpa. “We had to be able to work on sapphire crystal outside the case, fixing it there without the case itself being made from it. Creating the materials used was every bit as complex as the work done on them.”

This particular material has been dubbed itr2, standing for Innovative, Technical, Resin and Revolutionary. Developed and perfected in Switzerland over the course of more than two years of research, itr2® emerged from a desire to create a new, unique, material that is ultra-light – and sufficiently tough to be used to manufacture a watch case four times lighter than a titanium one. This  means that the watch can be made with just as much precision and geometry as for metal.

Already used for its ultra-light properties by another Brand for a tennis player, ArtyA went further including as a first worldwide the possibility to include any suspended object inside the case in ITR2.

And for the Glasnost G1, using bullets as the suspended object was pretty much a foregone conclusion.

The theme of transparency, so evident in the case, extends to the fast spinning  dial of the Russian Roulette Glasnost G1, too, with ArtyA opting for its own exclusive mechanical movement. Extensive skeletonizing has been carried out to allow as much light as possible to pass through. All the excess material has been painstakingly removed from the bridges, gears and plate. This minutely detailed work has resulted in significant weight reduction for the Russian Roulette Glasnost G1, and gives its components the appearance of being suspended in a vacuum. The watch is enclosed with a special ITR2 transparent back, offering an in-depth view of each working part – and every beat of the balance wheel.

To round off the ballistic theme, ArtyA has again used its now legendary six-chamber dial. Also present on the Son of a Gun Russian Roulette models, this dial has gradually become established as one of the brand’s style hallmarks. This incarnation is faithful to the original concept: five empty chambers, with the sixth housing a real, legendary-caliber bullet. Gun connoisseurs will instantly recognize it thanks to the inscription engraved on the casing – “MAG 357”, for instance.

Mounted on ball bearings, the fast spinning dial is lightning quick on the draw, spinning into life at the slightest movement. The visual effect is stunning. With five of the six chambers empty, the skeletonized movement and the transparent back, the Glasnost G1 appears to disappear almost completely for a few seconds. It’s as if time has been brought to a standstill by a bullet, embodying what could well be the best horlogo-ballistic metaphor yet delivered by a Son of a Gun.

Glasnost  meaning transparency in Russian was a policy that called for increased openness and transparency in government institutions and activities in the Soviet Union. Introduced by Mikhail Gorbachev in 1985 to reform the country.

The 43 mm diameter watch will be on offer in a limited edition of 9 pieces or in a series of unique pieces including suspended historical bullets, from February 2015.