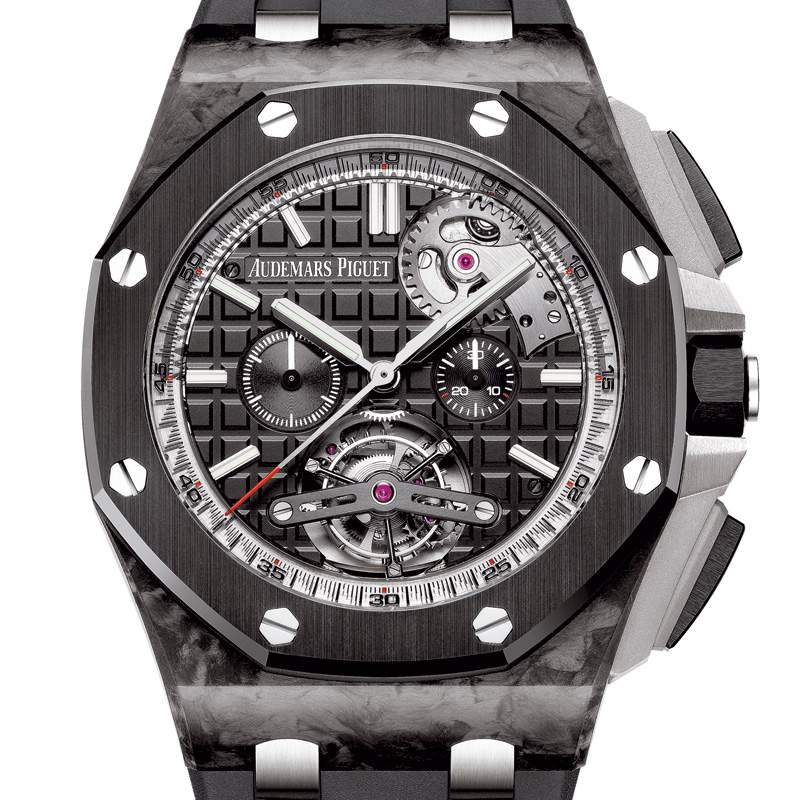 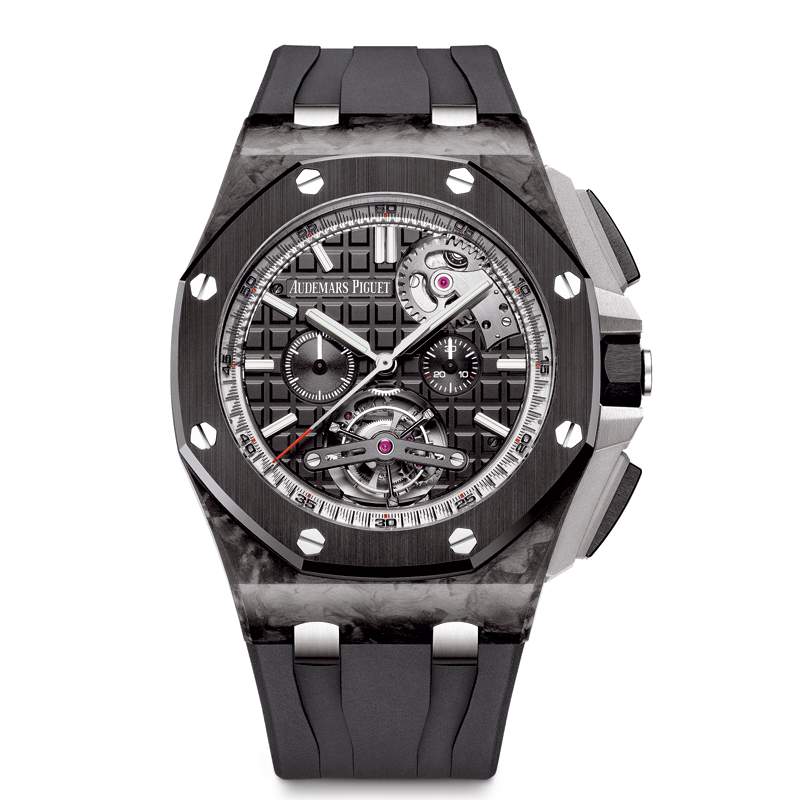 Comprising 335 parts, the Calibre 2897 is a true, micro mechanical work of art, its automatic winding system driven by a peripheral oscillating weight made from satin-brushed, 950 platinum. Bevelled, polished, chamfered and decorated entirely by hand, the Calibre 2897 creates a shimmering play of light and shade.

Exceptional accuracy is key and is ensured through both the tourbillon mechanism and the use of the column wheel system, widely regarded as the most reliable and precise of all chronograph configurations.

The new Royal Oak Offshore’s sleek black looks offer a more contemporary feel and are comprised of an expert fusion of modern materials, including forged carbon, ceramic, titanium and rubber. The piece’s high level of decoration, includes classic finishes such as mirror polishing, hand chamfering and circular graining making it a truly exceptional piece inside out.

The selfwinding mechanism of the new Royal Oak Offshore Selfwinding Tourbillon Chronograph driven by a peripheral oscillating weight visible from the dial side and mounted on ball bearings, is a design which shifts the mass of the rotor to the outer edge of the movement where it improves winding speed and efficiency. Its position on the edge of the movement means this watch retains a slimmer, contemporary profile.

The tourbillon has long been considered the apotheosis of the watchmaker’s art and, although it was invented as long ago as the late 18th century, few makers today have the capability to create their own. Audemars Piguet has debuted more than 16 tourbillon- equipped movements and, in 1986, became the first maker to offer an extra-thin, selfwinding tourbillon wristwatch.

The tourbillon contained within the Royal Oak Offshore Selfwinding Tourbillon Chronograph propels this historic device into the 21st century by way of a blackened, titanium bridge.

It takes a master watchmaker almost three days to assemble the tourbillon carriage, which comprises 85 parts yet weighs a mere 0.45 grammes.

One of the oldest pieces in Audemars Piguet’s heritage collection is an 1881 “foudroyante” version of a chronograph, while ledgers show that in 1886, it created one of the smallest chronograph calibres – a 22.5 mm model. By the 1920s, the Manufacture had produced its first chronograph wristwatch.

Today, the clearly visible column wheel of the Calibre 2897 movement marks it out as one of the finest mechanisms of its type and serves to perfectly co-ordinate the start, stop and re-set phases.

The chronograph hand takes off perfectly smoothly when timing begins due to the specially developed coupling yoke principle designed to eliminate any jerkiness common in less efficient mechanisms.

Few watches are as instantly recognisable as the Royal Oak Offshore. Eight trademark polished steel hexagonal screws nestle within the recesses of the black ceramic bezel. The powerful case middle, meanwhile, is constructed from forged carbon - a material that was first brought to watchmaking from the aerospace industry by Audemars Piguet in the Royal Oak Offshore back in 2007. The pushpieces are crafted from ceramic and titanium, while the dial is decorated with the instantly recognisable “Méga Tapisserie” motif.

Produced in a limited series of 50 pieces, The Royal Oak Offshore Selfwinding Tourbillon Chronograph is an exceptional blend of traditional watchmaking savoir-faire and high tech thinking

It encapsulates completely the excellence and high watchmaking skill of Audemars Piguet.