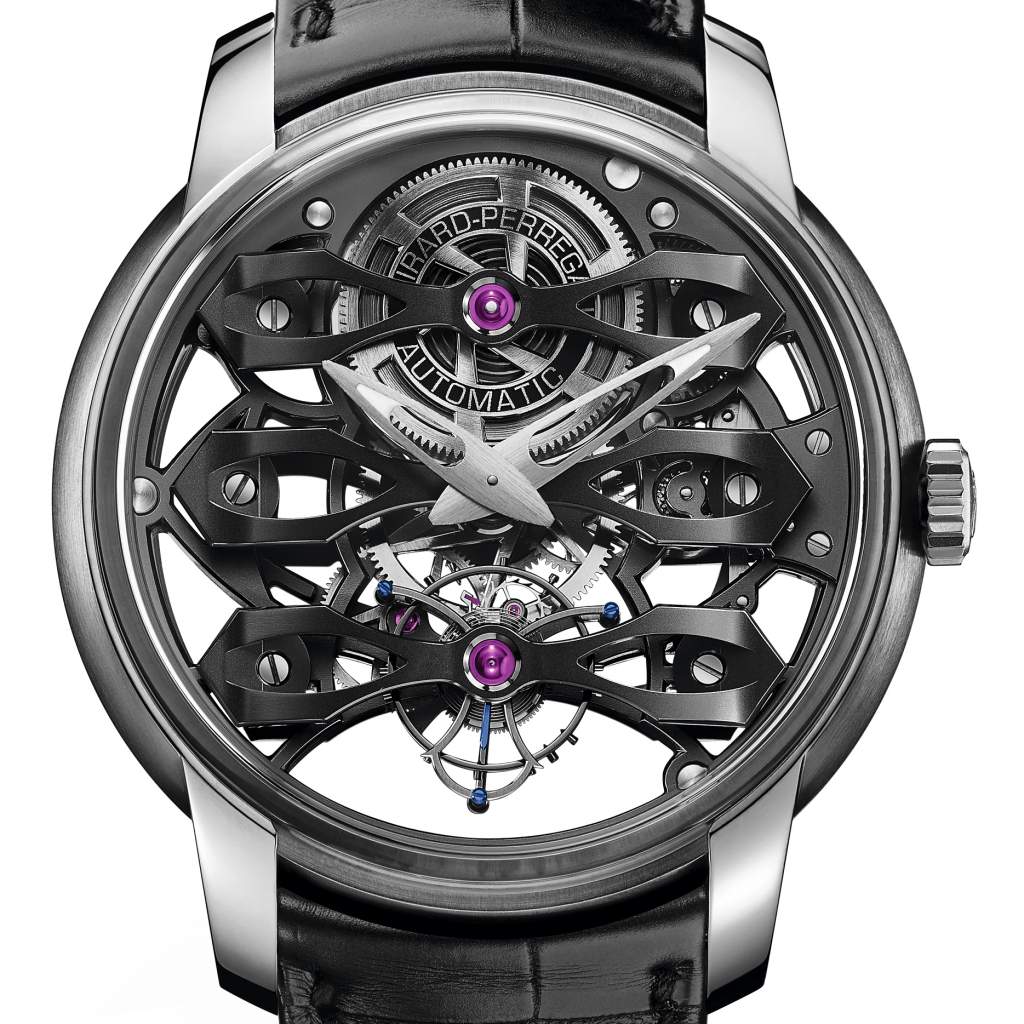 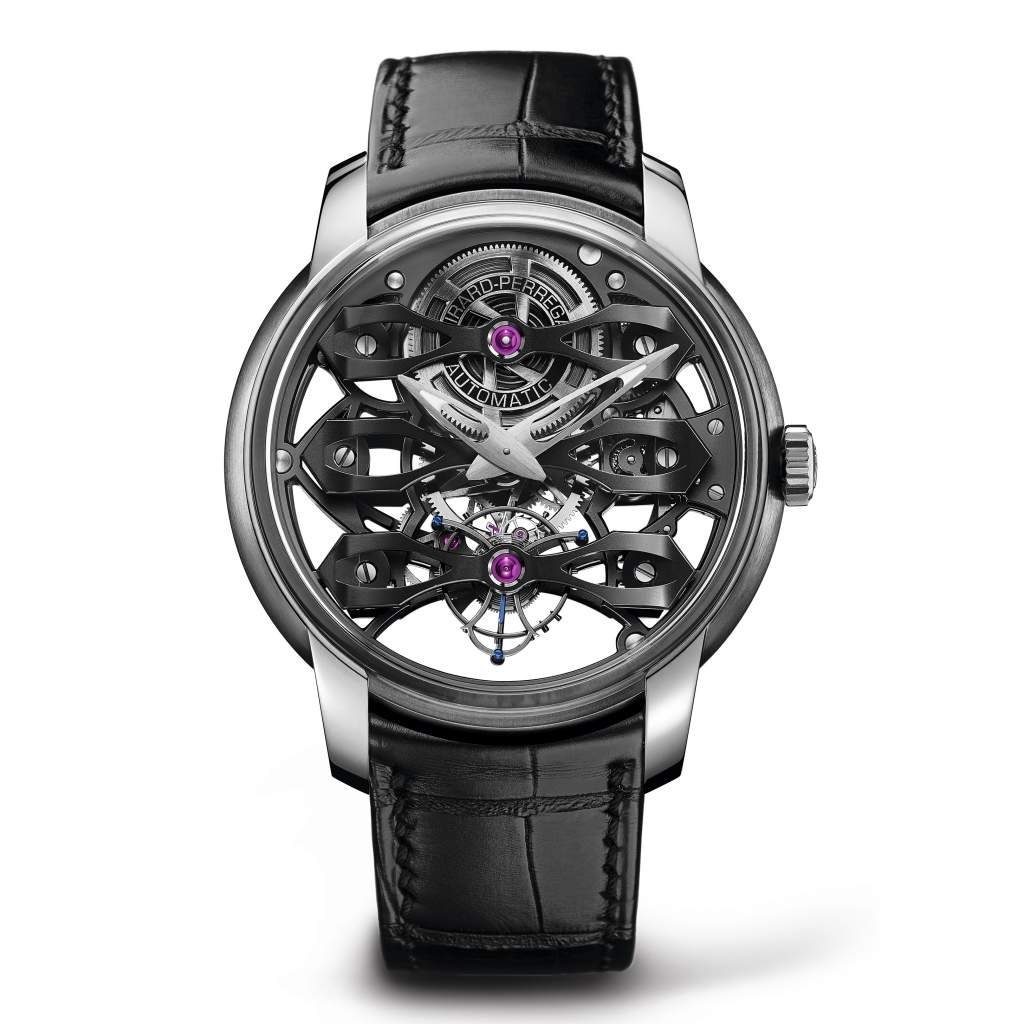 The Neo Tourbillon with Three Bridges Skeleton is crisscrossed with slender black finely rounded bridges. Their curves and cut-outs define the structure of the visual effect and support an incredibly slim mechanical structure. The ethereal suspended masses appear truly improbable given the extreme transparency of this complex calibre. Stretched like cables over a precipice, the bridges of the skeleton calibre are a nod to the architecture of their monumental counterparts around the world. The Millau Viaduct in terms of its sheer scope; the Mohammed VI bridge in Rabat for the openworked and sensual shape of its pylons; and the Oversteek Bruk for the fine sense of balance it exudes.

The model is presented in a 45 mm-diameter titanium case measuring 15.85 mm high. With its ample curves and large glazed areas, this shell resembles a panoramic observation platform looking out onto a horological monument. The satin-brushed bombed case band is distinguished by the total absence of any bezel. Its polished lugs are perched high on the case so as to create a strong and early inflection. It is this curve that ensures the Neo Tourbillon with Three Bridges Skeleton sits so snugly on any wrist, however small. This match between a work and the people for whom it is intended, this indispensable ergonomic factor, once again recalls the conceptual approach of architects in their dedication to serving humankind and the functional usage of everything they design.

The architecturally-based construction is an omnipresent factor in the work of Girard-Perregaux. The Neo Tourbillon with Three Bridges Skeleton conveys references to the innermost elements of artistic construction. Dominated by sapphire rather than titanium, the case is built so as to maximise the view of the movement, itself based on the principle of transparency. The dial-side crystal is of the glass box type, steeply cambered and convex. It rises vertically from the case, before changing angle to cover the heart of the watch, like a protective dome. The caseback crystal is also convex, meaning that, when viewed from the side, the Neo Tourbillon with Three Bridges Skeleton is a band of grey metal with a matt appearance achieved by satin brushing, framed by two sapphire protrusions. In architecture, these are what are referred to as the “skin” of a construction. This technical and visual layer ensures transparency and reveals the structure, revealing the internal network of reinforcements that give strength and shape to a building. In this instance, the sapphire skin plays a starring role in the watchmaking show, as well as in its structural requirements and in expressing the distinctive Girard-Perregaux style.

These scratchproof, complex and chemically pure crystals thus reveal the structure of the GP 9400-0011 calibre, a profoundly revisited version of Calibre 9400. This restructuring mainly consists of skeleton working that basically involves eliminating the baseplate. Almost as if the ground had vanished beneath its feet, the movement finds itself suspended between two layers of air. Certain indispensable anchor points remain, but the opaque and solid supporting structure has disappeared. A closer look shows the screws holding the openworked, polished and bevelled bridges, driven far into the structure of the calibre. They are like the abutments of a suspension bridge, offering deep anchorage as well as an impressive technical demonstration.

Contrary to other skeleton models made by Girard-Perregaux, the Neo Tourbillon with Three Bridges Skeleton has not sought to create a graphic shape by openworking, but instead to ‘erase’ the material so as to enable the bridges to express themselves to the full. To the point where the underlying part of the movement baseplate, which is solid on Calibre 9400, is replaced here by two bridges. The latter are exactly identical to those on the dial side: a first in a structure based on visible bridges. These two bridges are the counterparts of the gear-train bridge (in the centre) and the tourbillon bridge (at 6 o’clock). Their subtly arched shape slightly increases the overall movement thickness.

The calibre of the Neo Tourbillon with Three Bridges Skeleton is 9.54 mm thick, while the titanium caseband is the same size as on the previously released model.  The added thickness therefore relates to the transparent volumes and is neither visibly noticeable, nor perceptible on the wrist.

Physical lightness is ensured by the low weight of sapphire and titanium and their limited presence, while visual lightness is created by skeleton-working. The bridges contribute to the overall transparency of calibre. They are made of titanium, sandblasted and then blackened by a PVD process. Their 3D shape is so complex, composed of interior angles, arches, extensions and overhangs, that their machining is a watchmaking feat in itself. The result is a free, sensual, taut and powerful shape.

Coursing between these bridges are the two life-flows of watchmaking:  the exchange between energy and information, between the force stored in the barrel and the regulating effect of the tourbillon. The former is wound by a micro-rotor, which is placed concentrically with the barrel – a unique position for this organ. The high inertia of this hefty white gold micro-rotor ensures a minimum 60-hour power reserve. At the other end of the kinematic chain sits the Girard-Perregaux tourbillon. This 80-part component is made from titanium so as to safeguard operational autonomy and reduce friction. It spins on its axis once a minute, driven by a large-diameter balance wheel coupled with a hairspring featuring a Philllips terminal coil and a Swiss lever escapement. The entire fully assembled carriage weighs just 0.25 grams.