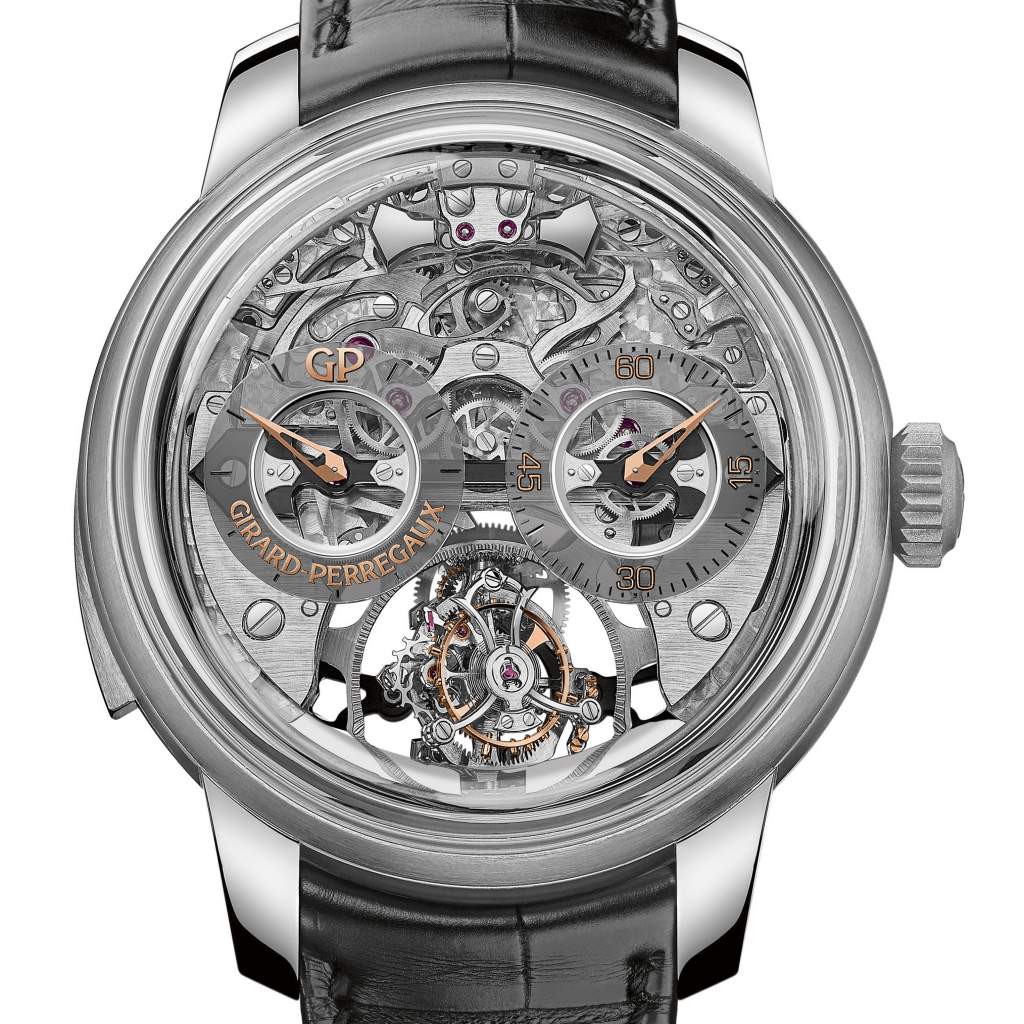 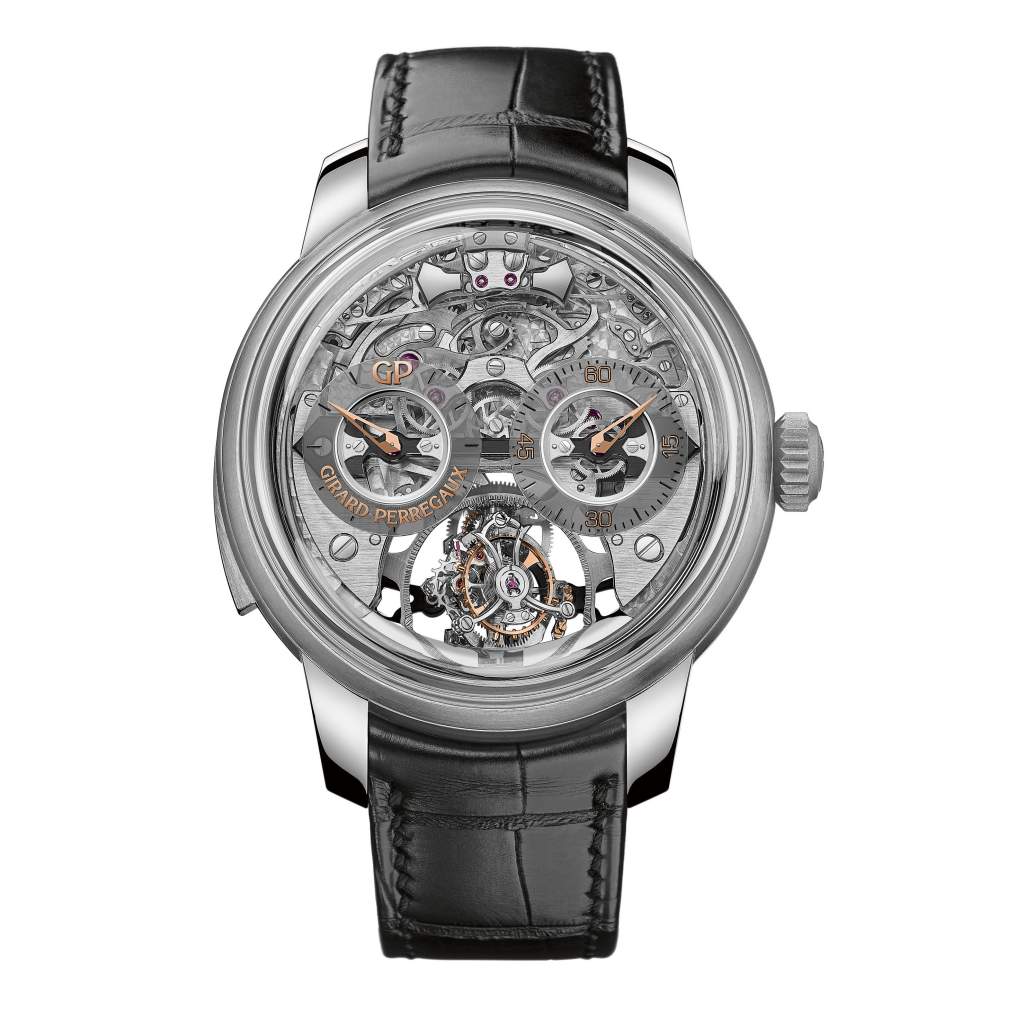 Three-time music for a whirl of sensations

A true technological and aesthetic revolution, the Minute Repeater Tri-Axial Tourbillon epitomises the contemporary approach to horological complications adopted by the Manufacture Girard-Perregaux. Crafted in titanium so as to chime with greater intensity, this 48 mm-diameter model powered by a mechanical manual-winding calibre houses two of the most challenging horological complications: the minute repeater and the tourbillon simultaneously gravitating around three axes. This exceptionally modern interpretation, magnified by transparency effects and achieved by combining the talents of the artisans within the Maison founded in 1791, is a distillation of rare expertise, assembled in keeping with tradition by a single master-watchmaker.

Radiating intense originality and an equally powerful presence, the new Minute Repeater Tri-Axial Tourbillon asserts itself at first glance as a powerful historical and technical statement. This 48 mm-diameter titanium watch with its sophisticated design entirely in tune with current market trends encompasses the full range of Girard-Perregaux skills and unites within two major complications the entire spectrum of creative approaches that have punctuated the history of the Manufacture. Right from its founding in 1791, the Maison based in La Chaux-de-Fonds displayed a penchant for watch products whose often spectacular mechanisms did far more than simply telling the time. A little over half a century later, Constant Girard, who had married Marie Perregaux in 1854, decided to focus the company’s attention firmly on technical precision. He developed for his watch models certain highly accurate tourbillon regulators whose gracefully timed dance was magnified by the development of symmetrical and minimalist calibres that attracted public interest through the clever theatrical staging of mechanics. More recently, the Manufacture provided a memorable demonstration of its mastery in the field of musical complications with a series of Grande Complication models named “Opera”. These creations can now be seen as belonging to the genealogy of this new contemporary reference striking the time on demand and soberly displaying it at the pace set by the Tri-Axial Tourbillon, the most sophisticated regulating organ on the market today.

A gem of mechanical refinement, the Minute Repeater Tri-Axial Tourbillon was developed by the engineers and watchmakers of the Manufacture Girard-Perregaux in a manner entirely worthy of a luthier. A true musical instrument sounding the time with impeccable precision, this Fine Watchmaking model has naturally been endowed with an exterior specially designed to allow the exceptional minute repeater mechanism to reveal the wealth of its harmonics with outstanding power. In order to give the sound its full amplitude, the 48 mm-diameter case with its contemporary design is machined from grade 5 titanium. This metal was chosen because – in this configuration and based on a number of studies conducted in the watchmaking workshops – the algebraic ratio between the size of the (preferably large) case middle and the density (ideally as low as possible) is extremely favourable to acoustic expansion.

Moreover, so as to maximise the auditory efficiency of the minute repeater, the watch’s inner diameter has been designed in such a way that the calibre makes a perfect fit without the slightest play. Thanks to this symbiosis between the mainplate and the case, the acoustic wave can be propagated as effectively as possible from the heel of the gong-ring through to the mainplate, and then from the latter to outside the watch. This optimised construction eliminates the need for a solid connection between the striking gong and the exterior of the timepiece. It also contributes to simplifying disassembly of the mechanical hand-wound movement – reference GP09560-0001, measuring 37.50 mm in diameter (16 ½’’’) – for maintenance purposes. To enable connoisseurs to admire each component of this ultra-sophisticated movement, the designers have chosen to use two box-type sapphire crystals. These concave crystals, machined with a bevel and glareproofed to improve the depth of field have been fitted on the front and back of the watch, thus enabling the gaze to plunge into the very heart of the movement structure. This way of observing the mechanism from all angles, combined with the original calibre construction, affords an almost three-dimensional, mesmerising and above all unprecedented view of the horological complications in operation.

To visually highlight the operation of the hammers, the hour and quarter racks, as well as the surprise-piece enabling the mechanism to strike the minutes, the designers asked the watchmakers to create an original hours display structure allowing them to dispense with a dial. To free up as much space as possible and thus enable the repeater mechanism to reign supreme over half of the upper disc surface normally occupied by the dial, the masters of the Manufacture Girard-Perregaux divided the space into two parts by means of a long bridge positioned in line with the winding crown. This movement part with its “long-drawn” surface and hand-chamfered ridges echoes the shape of the arrow-type bridges of the famous pocket watch known as “La Esmeralda” and which won a Gold Medal at the 1889 Paris Universal Exhibition. Signature of the Manufacture since 1860, the visual presence of this calibre design currently the oldest still in production is further heightened in this construction by a black PVD treatment. This component thus highlighted so as to divide up the mechanical zones serves to bear the gear train driving a display of the hours in a sapphire counter at 9 o’clock and the minutes in one just opposite at 3 o’clock. This type of highly original construction, reminiscent of a regulator, also obliged watchmakers to rethink the kinematics of the complication, since the hours and minutes are no longer on the same axis – but instead presented in two positions, independently of each other.

While this arrangement is visually pleasing and enables one and all to view the main components of the minute repeater, it first and foremost stems from research conducted by the engineers and watchmakers of the Manufacture in order to enhance the chiming power of this rare complication. Acoustic studies demonstrated that in order to guarantee that the sound wave – which the artisan in charging of assembling each model adjusts by ear – would expand as tunefully as possible towards the exterior, the position of the source from which it is emitted had to be optimised. Elements such as the hammers and gong-rings usually placed on the back of the movement were therefore repositioned on the front. In this way, once the repeater slide on the left of the case middle is activated, the sounds emitted by the gong-rings are no longer partially absorbed by the wrist – necessarily in contact with the instrument – nor by the mainplate, but can instead more easily radiate towards the outside of the titanium case guaranteed water-resistant to 30 metres. Eliminating the dial and reconstructing the time display mode thus stemmed from this same determination to substantially increase the sound volume of this timepiece intended to accompany music-loving aesthetes at the heart of today’s often very noisy big cities.

A dance swaying to the beat of a high-precision movement

All watchmakers would agree that the best possible watch must have the most efficient possible regulator. To meet these specifications, the master-watchmakers of the Manufacture had chosen to fit this model with a particularly accomplished regulating organ which – based on a reinterpretation of the tourbillon patented by Breguet in 1801 – features original multi-axis kinematics more suited to meeting contemporary wearing habits. To guarantee superior timekeeping precision, its tourbillon has been designed to spin on three different axes at varying speeds. The purpose of this 1.24-gram carriage comprising 140 parts and performing a first rotation in two minutes, a second in one minute (the same as a traditional tourbillon carriage) and a third in 30 seconds is to enable the balance-wheel’s unbalance – an inherent factor in all mechanical watches – the opportunity to occupy a maximum of points around an imaginary sphere. By enabling the flaws in equilibrium to thus successively occupy all points on this sphere within a relatively short space of time, they cancel each other out and free the balance-wheel from the disturbing effects of gravity, whatever the watch’s position on its owner’s wrist. This capacity, which is the exclusive preserve of this type of regulator, enables its dynamic owner appreciate of exceptional products to display the time with chronometer-worthy precision.

With its fascinating blend of equilibrium and complexity, the Minute Repeater Tri-Axial Tourbillon is the kind of time-measuring instrument destined to lay a new milestone in watchmaking history. This graphically accomplished and technically innovative marvel effectively merges futurism and tradition, offering concrete confirmation that it is possible to keep watchmaking heritage alive without confining it to classical patterns. This disruptive approach raises this model – fitted with a black alligator strap secured by a titanium folding clasp – to the rank of an authentic work of art.