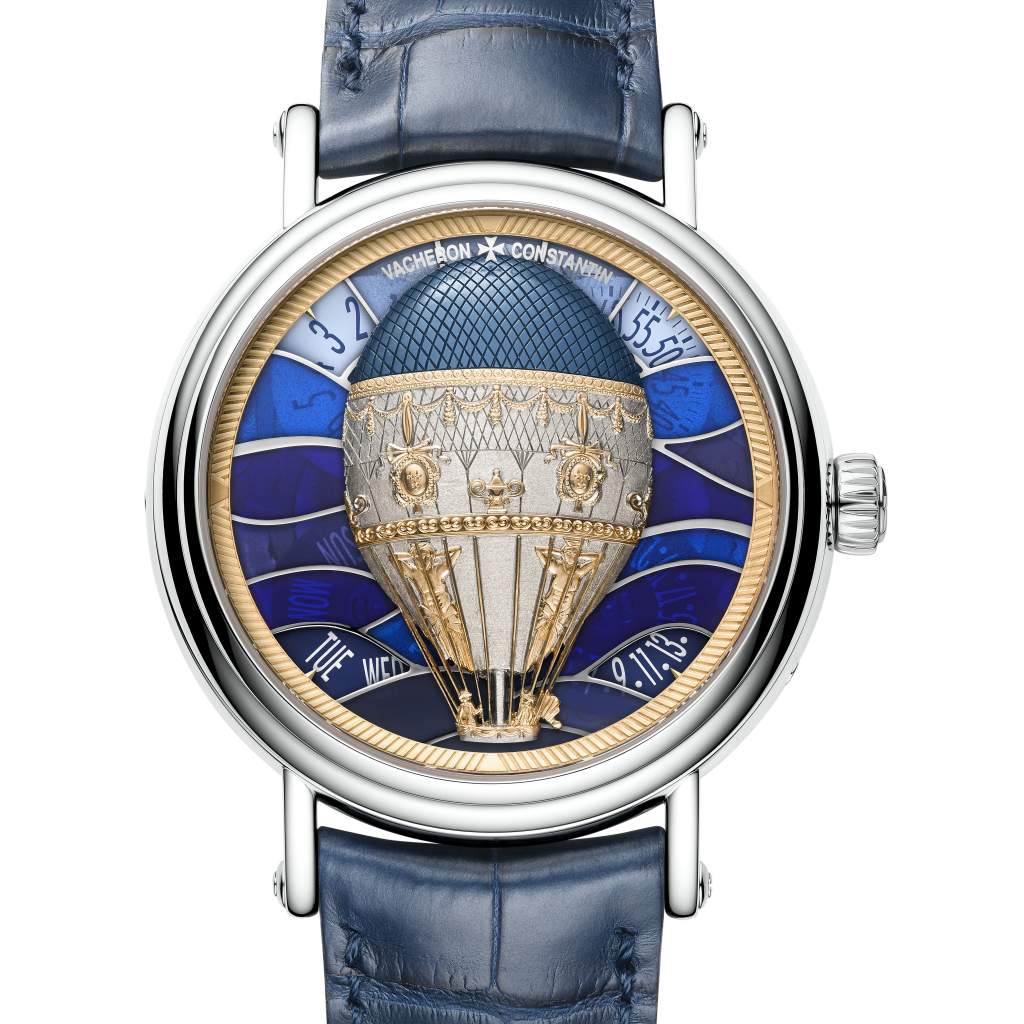 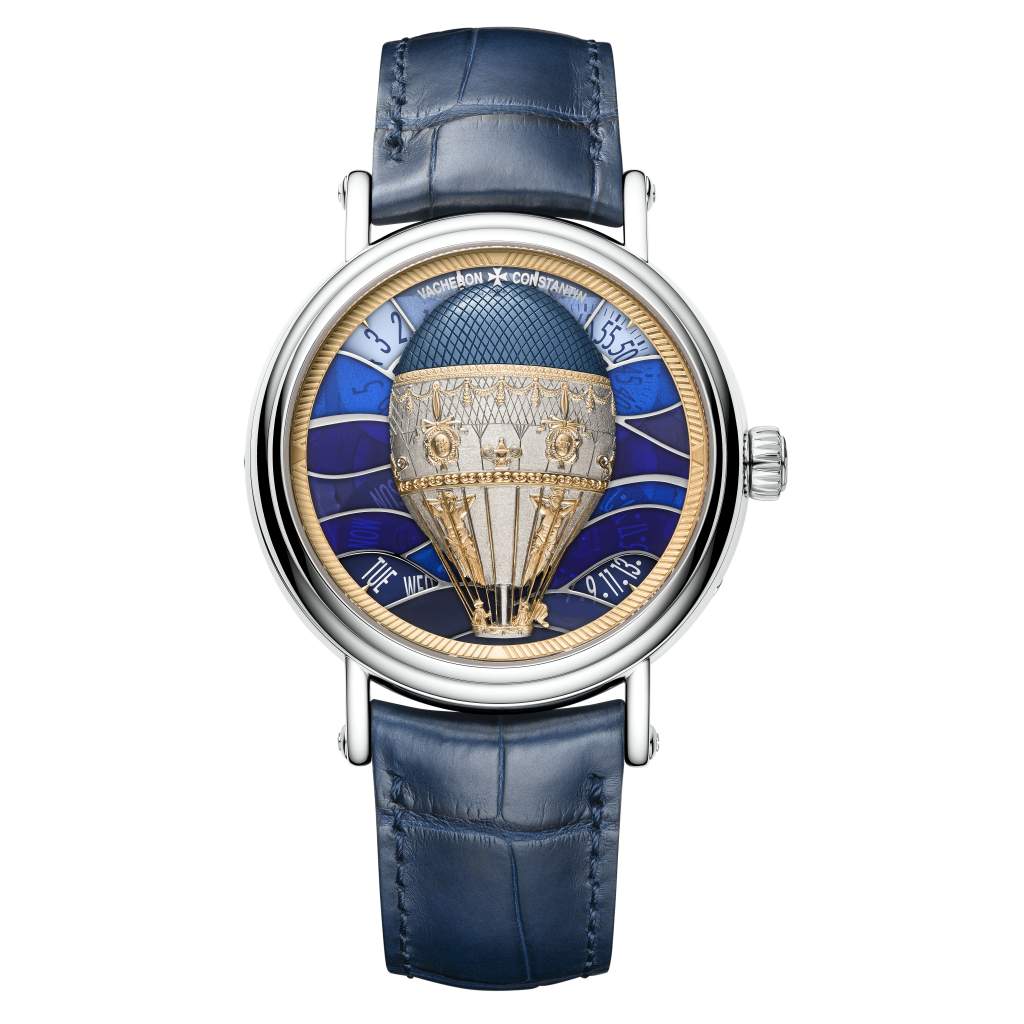 Métiers d’Art Les Aérostiers: the fabulous conquest of the skies

Flying. A dream that dates back to the earliest days of humankind. After countless mythological, epic and sometimes incredible attempts, the dream at last came true in the late 18th century. The first “aerostatic experiments” successfully defied gravity. How many secrets of the much dreamed of and imagined kingdom of the skies would they reveal? Courage, genius as well as a touch of madness fired the early and intrepid balloonists known in French as aérostiers. Joyful crowds cheered these amazing hot-air balloons lifting off into the air. The Métiers d’Art Les Aérostiers collection by Vacheron Constantin pays tribute to this exhilarating chapter in history. On the scale of a watch dial, the master engravers of the Maison also accomplish an authentic feat: faithfully reproducing in miniature the historical depictions of five flights undertaken in France between 1783 and 1785. Splendid hand-engraved and micro-sculpted gold hot-air balloons hover against a translucent plique-à-jour enamel background, while time is displayed to the beat of Manufacture Calibre 2460 G4/1.

Vacheron Constantin is exploring new creative horizons in telling the marvellous story of skyborne adventurers. In addition to the delicate pounced ornament engraving technique, the dials are adorned with plique-à-jour enamel, a rare skill used for the first time by the Maison. This association is a natural continuation of the tradition of technical and artistic excellence cherished by Vacheron Constantin. The new Métiers d’Art Les Aérostiers collection combines these artistic feats with technical expertise by using the Vacheron Constantin Calibre 2460 G4/1 driving special displays: an original movement enabling seamless integration of the indications within the overall dial aesthetic.

The master engravers in the Vacheron Constantin workshops took up a real challenge: adding volume to the original two-dimensional drawings, and interpreting their colours through finishing effects. Each hot-air balloon called for up to three weeks of craftsmanship in order to reproduce the entire range of subtle feature and ornamental details of the original works. The dials thus compose authentic miniature scenes graced with an extraordinary variety of motifs.

The pounced ornament technique consists in removing material so as to fashion relief effects. This irreversible operation calls for an impeccably deft touch. The master engraver first traces the volumes using a drypoint technique, before sculpting the precious mass and creates a particularly delicate rounded effect. This stage serves to carve out the curves of the balloon and the basket, as well as the lines of the ropes. The burins are repeatedly sharpened so as to achieve extreme precision. The level of finishing becomes ever more sophisticated, all the way through to the smallest details of the human figures, animals and the meticulous decoration of the balloons. The artisans each use their own methods and tools: small stones, brushes, papers and files. The light effects playing over the different gold textures naturally influence the visual appearance of the surface.

The colourful magic of plique-à-jour enamel

On the dials of the Métiers d’Art Les Aérostiers collection, a translucent background in sky blue, dark blue, turquoise, brown or burgundy, evoke a spirit of airy transparency. Vacheron Constantin is for the first time calling upon this skill mastered by very few enamellers. Its layout is reminiscent of cloisonné enamelling; while the absence of a base recalls a miniature stained-glass window. The balance between the various shades is extremely subtle, as is the polishing of the partitions between them.

The predominant shades of each creation are also picked up on the display discs as well as the matching strap. The inner bezel ring framing the enamel is engraved with a motif inspired by balloon ropes, also varying between 3N, 4N or 5N gold according to the models.

The aesthetic appeal of a highly technical calibre

Transparency effects provide fascinating glimpses of the gear trains and discs of Calibre 2460 G4/1 through the plique-à-jour enamel. This special self-winding calibre enables a singular hands-free staging of the indications. The disc-type display is cleverly revealed through apertures around the rim of the dial, between the curves of the plique-à-jour enamel partitions. The hours, minutes, day of the week and date are shown by means of four discs: respectively two of the dragging type and two of the jumping variety. The calibre decorated according to the highest watchmaking finishing standards is generously visible through the transparent caseback. The gold oscillating weight, specially engraved and domed for this new collection, evokes the rounded shape of a hot-air balloon.

Five flights… and as many stories engraved in gold

Science, magic and dreams: the Métiers d’Art Les Aérostiers collection retraces the thrilling experience of five historical flights made in France, a pioneering nation in this domain. In the late 18th century, these extraordinary feats enchanted royal courts and dumbfounded crowds alike.

Métiers d'Art Les Aérostiers - Bagnols 1785 – Ten thousand people salute this flight with thunderous applause. The elegant white and yellow gold basket appears to be floating on plique-à-jour enamel in various shades of blue. The upper part of the balloon is coloured by electroplating. Seven years later, the balloon canvas would serve to make clothes for Republican volunteers.

The Métiers d’Art Les Aérostiers collection represents as many journeys to the heart of the sky, testifying to a vibrant period buoyed up by a spirit of conquest. Brilliantly interpreted by the master artisans of Vacheron Constantin, the five flights each come in an exclusive limited numbered edition of five.