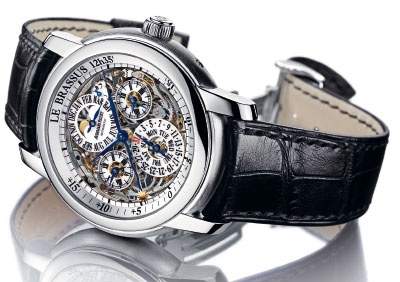 The Jules Audemars Equation of Time has its eyes firmly fixed on the universe, as it  admires and reflects the endless dance of the stars. This exclusive watch combines several functions: equation of time, sunrise and sunset times, as well as a perpetual calendar with astronomic moon.

This timepiece remains loyal to the tradition of innovation of the Manufacture  Audemars Piguet. It remembers the pocket-watch equipped with an equation of time device that first emerged from the workshops of the Manufacture before 1900. It remembers 1925, and the first model comprising a perpetual calendar lined up along the 12 o'clock – 6 o'clock axis. It also remembers a perpetual calendar pocket-watch with “running hand” equation of time display, launched in 1928.

More recently, in 2000, the master-watchmakers of the Manufacture perfected the characteristics of these three antique models to create an exceptional wristwatch. Today, the Jules Audemars Equation of Time has forgotten nothing of its past. It accomplishes a new feat by uniting technical accomplishments with celestial harmony, in a splendid skeleton version.

The equation of time

True noon, when the sun is at its zenith, depends on the longitude of the place where the observation is made, always taking into consideration the equation of time differential, save on April 15th, June 14th, September 1st and December  24th. This differential ranges from minus 16 minutes and 23 seconds on November 4 to plus 14 minutes and 22 seconds on February 11. The equation of time pointer fitted on the dial's central axis shows this differential, true noon corresponding to its position exactly over the minute hand, and the hour hand providing the local time of solar culmination. Thanks to its flange mentioning the locality determined by the person wearing the watch, the Jules Audemars Equation of Time watch places solar culmination time directly on the wrist, with no need to consult astronomical tables or effect time-wasting calculations. Shaped somewhat like a kidney, its equation of time cam completes exactly one rotation over a one-year period. Understandably, it must be machined and adjusted with extreme precision for the watch to display accurate solar culmination time all year round.

At the equator, the duration of days and nights is the same throughout

the year. The greater the distance from the equator, the greater their seasonal variations; during solstices at the poles, the sun either never sets or never rises above the horizon. Sub-dials with 0-to-12 and 12-to-24 graduations show the times at which the sun respectively rises and sets all throughout the year at the latitude for which the watch has been adjusted, corresponding to the city of reference engraved on the flange. The hands of these dials are driven by the two cams precisely machined  to within the nearest thousandth of a millimetre.

With a standard perpetual-calendar mechanism, the lunar cycle requires a correction every two years and seven months. Thanks to the astronomical moon which Audemars Piguet's master watchmakers have fitted on the Jules Audemars Equation of Time design, a watch adjusted in the year 2005 will require no lunar-cycle adjustment whatsoever until a simple press on the appropriate push-piece in 2127. Compared to the 59 teeth of a standard “horological” moon mechanism, the gear-train driving the Audemars Piguet moon comprises 135 teeth, and its differential with the actual moon cycle amounts to a mere 57 and 1/5 seconds compared to 44 minutes and 2 and 4/5 seconds for a standard “horological” moon.

All perpetual-calendar indications are positioned along the 12 o'clock – 6 o'clock axis. With no need for a manual correction before March 1, 2100, it displays February 29 every leap year thanks to a special wheel that takes four years to effect a complete rotation. The movement is also thinner by a few tenths of a millimetre thanks to an original advance mechanism for superfluous end-of-month days.

Sunrise and sunset times depend on both latitude and longitude, whereas solar culmination  time is determined by longitude. Given that each watch may be adjusted according to the location chosen by its owner, the sunrise and sunset cams are available for all cities of the world, part from those located beyond 55 degrees North (Novossibirsk and Edmonton) and 55 degrees  South (Auckland and The Falklands). The name of the city of reference is engraved on the flange carrying the equation-of-time graduations. On request, it is possible to get flanges calibrated for other cities.

With their Jules Audemars Equation of Time skeleton watch, Audemars Piguet's master-watchmakers have once again worked their magic, bringing the sun and the moon's celestial choreography directly to your wrist.