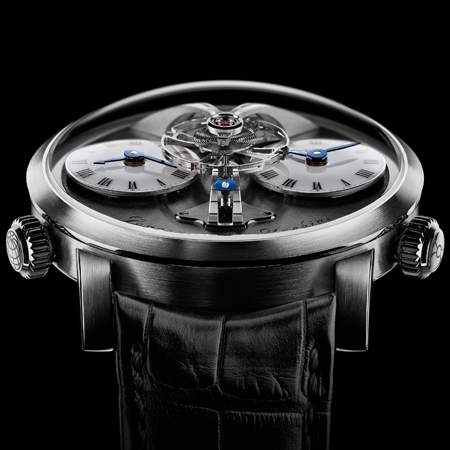 Inspiration and Realization: While MB&F's futuristic Horological Machines have a firm foundation in the very best of traditional horology, Maximilian Büsser wanted to pay homage to that rich tradition by imagining the type of timepiece he might create if he had been born 100 years earlier, in 1867 instead of 1967. With its large, sedately oscillating balance, domed dials, historical bridge design and classical fine-finishing, Legacy Machine No.1 is the very contemporary, yet traditionally elegant, fruition of that dream.

Movement: LM1's ingenious three-dimensional movement was specifically developed for MB&F by Jean-François Mojon and Kari Voutilainen. The balance wheel and spring are at the very heart of any mechanical watch movement and are responsible for regulating timekeeping accuracy. Büsser has long been fascinated by the large slowly 18,000 bph balance wheels, so it was no surprise this was his starting point from which to let his fertile imagination roam free. What was surprising though is just how radically he re-interpreted tradition by relocating the balance wheel from its more usual position hidden at the back of the movement to not just the top of the movement but majestically floating above the movement and the dials.

While the location of Legacy Machine No.1's regulating organ may be considered avant-garde, ‘tradition' is upheld by the large 14mm diameter balance wheel with regulating screws balance spring with Breguet overcoil and mobile stud holder.

Another very special feature of the LM1 movement is the ability to set the two time zones completely independently. Legacy Machine No.1 allows both hours and minutes of each dial to be set to whatever time the user wishes.

The world's first vertical power reserve indicator on LM1 is driven by an ultra-flat differential with ceramic bearings allowing for a slimmer complication and a more robust and longer-wearing mechanism.

Dial and Indications:  The rate keeping of the twin dials is controlled by the same regulator (balance and escapement) so that once set, the two times stay perfectly synchronised with each other. Both the hours and minutes on both dials can be set to any time desired via their respective crowns.

Complementing the three-dimensionality of the balance floating in space, the dual white dials with their bright blue gold hands float above the top of the movement. The dials are gently domed with a translucent, high-gloss lustre created using a laque tendue process in which multiple layers of lacquer are applied and heated, causing them to stretch over the surface of the dials.

To ensure aesthetic purity of the dials and their traditional Roman numerals, a sophisticated fixation underneath negates the necessity of visually obtrusive used screws. A fine perimeter circumscribing each dial elegantly reinforces their timeless classicism.

Fine Finishing and Historical Legitimacy: Acclaimed master watchmaker Kari Voutilainen assumed responsibility for ensuring the historical accuracy of the style and finishing of the Legacy Machine No.1 movement. No easy task with such an unconventional suspended-balance design from which to begin.

A finely engraved sun-ray pattern on top of the movement plate (dial side) subtly catches the eye at certain angles without distracting attention from the twin white dials, floating balance or vertical power. But it is in the style and finish of the bridges and plates visible through the display on the back of the movement where Kari Voutilainen has excelled in providing exquisite historical fidelity in both the shape of elegantly curved bridges and the traditionally wide space between the bridges and between the perimeter of the bridges and the case. On the back of the movement, over-sized ruby jewels set in highly-polished countersunk gold chatons provide striking visual counterpoints to the Geneva waves traversing the sensually curved bridges.