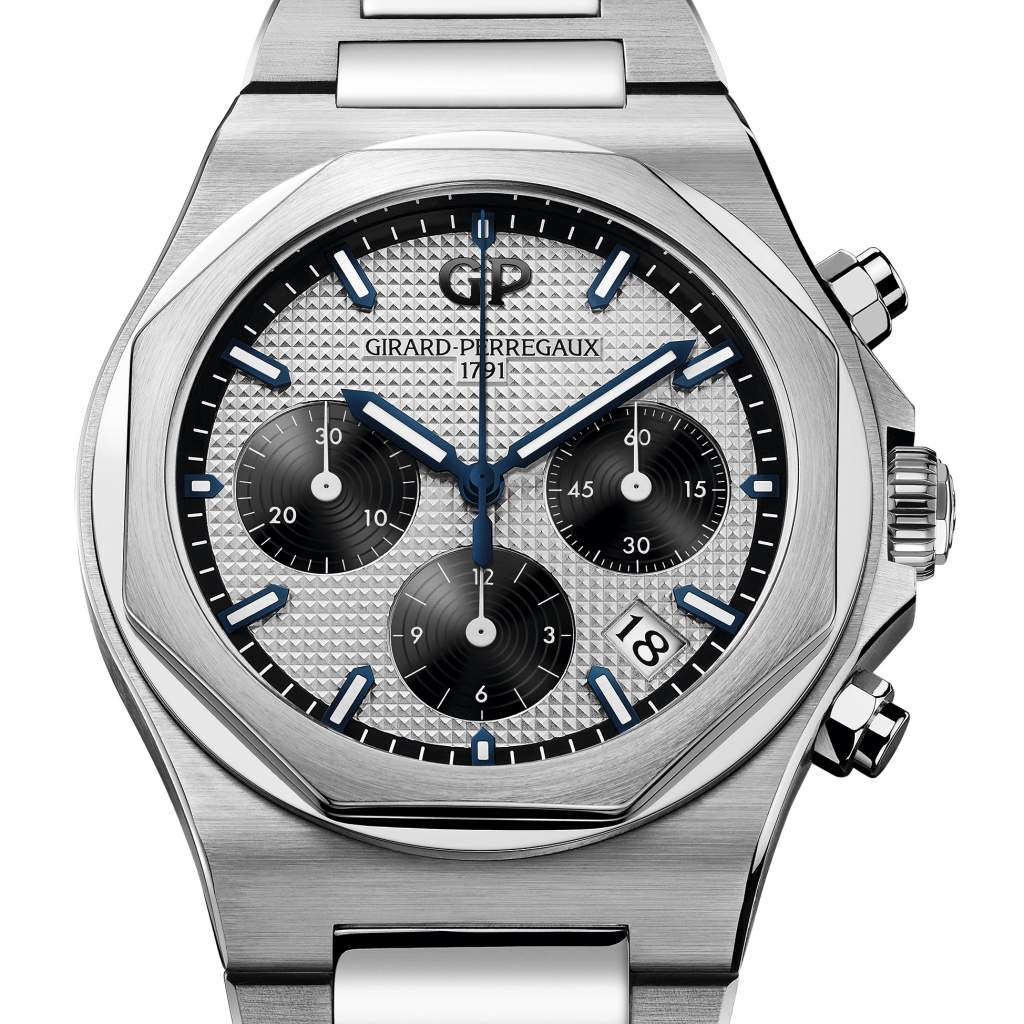 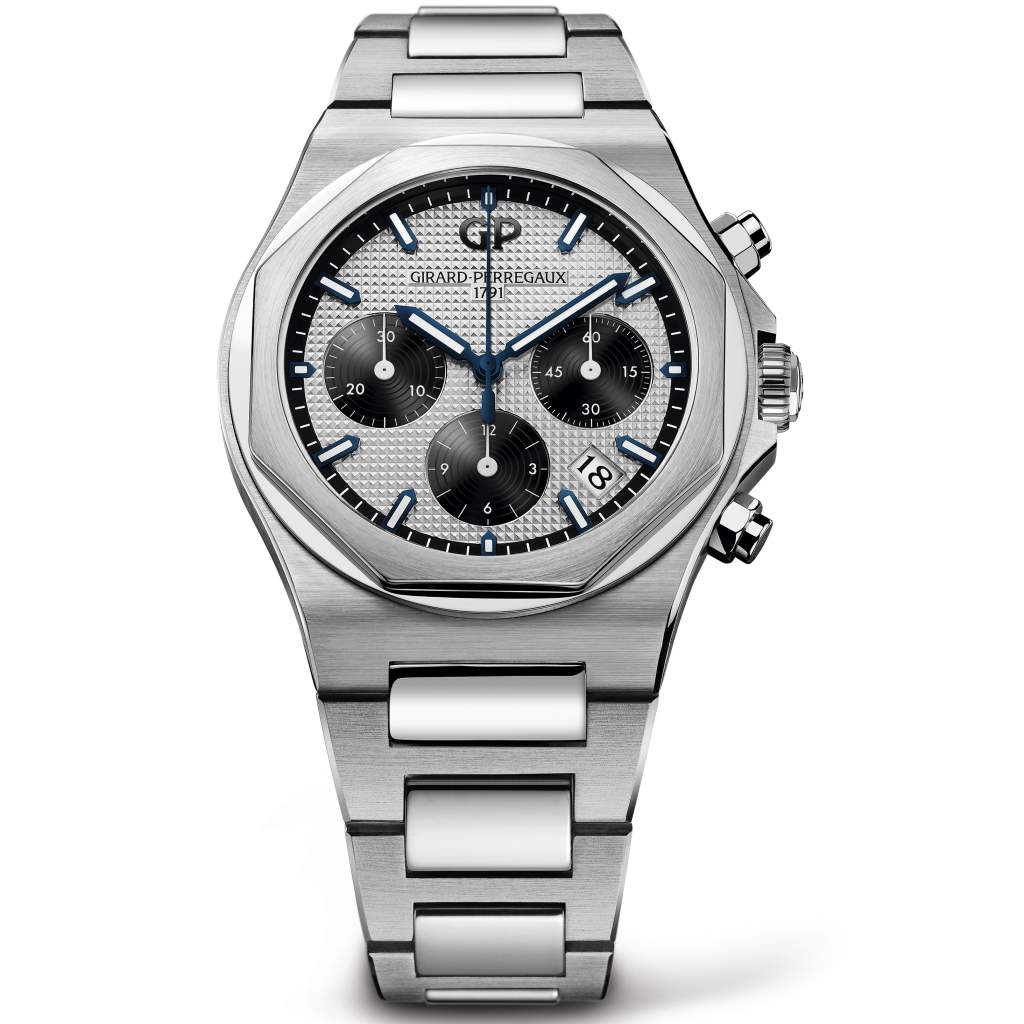 Two years after its return to the Girard-Perregaux collections, the Laureato is writing a new chapter in its history with the introduction of an enriched range of chronographs. In this natural and eagerly awaited extension of an eminently sporting chic collection, the Laureato once again demonstrates the strength and relevance of the design of this iconic watch, born in 1975. This timepiece is designed for comfortable and natural daily use. Entirely clad in steel or pink gold, available with a 42 or 38 mm case and interpreted in three dial colours, the Laureato Chronograph is an exceptionally versatile watch. Equally at ease in smart or informal attire, it is capable of adapting to every daily circumstance encountered by an elegant man of excellent taste.

Girard-Perregaux has fitted this emblematic case with its self-winding chronograph movement, driving two counter and small seconds as well as a date display. As well as guaranteeing impeccably accurate timekeeping, it is distinguished by its comfortable power reserve and the particularly smooth activation of its pushers. Its horological qualities are complemented by exemplary finishing including “Côtes de Genève”, chamfering and straight graining, all stemming from the multiple skills cultivated within the Manufacture Girard-Perregaux.

The Laureato Chronograph is endowed with the powerful identity of all Laureato models. This personality all its own is based on a genetic code that has been driving evolutions in its aesthetic details for the past 43 years, while never distorting its essence. The Laureato is defined by a polished octagonal bezel fitted on an integrated case, meaning with no lugs or loops; as well as by its metal bracelet forming a natural extension of the case and representing an original design element in its own right.

This metal bracelet is distinguished by wide satin-brushed H-shaped links as well as domed and polished interlink elements. The interplay of polished and satin-brushed surfaces creates heightened visual interest and enlivens the watch. When worn, this bracelet reveals the most important quality of all: an exceptionally soft, supple feel. It makes the Laureato perfectly comfortable on any wrist.

By definition, the Laureato is adorned with a dial bearing the “Clou de Paris” hobnail motif, a set of small raised pyramids occupying the watch face and catching the light. But above and beyond such elements, the Laureato is above all a state of mind. Sporty because of its sturdiness, chic because of its meticulous details, it is designed as much for grand occasions as for relaxed daily wear. This versatility stems from intense reflection on the principles of ergonomics, volume and style, giving rise to a broad array of chronograph versions.

Versatility represents a major design accomplishment. A watch capable of welcoming every complication, of fitting every wrist, is the result of a successful design. The Laureato thus adjusts to the demanding layout of the various subdials and pushers characterising the Laureato Chronograph. The exterior of the Laureato case has evolved to incorporate a crown guard (shoulder), a curve naturally imposed by the pushers themselves. The latter are octagon-shaped like the bezel, creating protuberances that the Laureato Chronograph incorporates with natural ease. The dial, adorned as ever with the “Clou de Paris” hobnail pattern, comes in a choice of silver-toned, black or deep blue versions. The two counters and small seconds subdial all feature a snailed finish that ensures they stand clearly against the background. They bear simple and slender hands facilitating reading without overloading the dial.

In each of its two sizes, the Laureato Chronograph comes in a choice of two complementary materials. 904L steel is distinguished by its high chromium content. While particularly hard to machine, this metal is endowed with superior corrosion resistance and exceptional radiance after polishing, as well as after the satin-brushing running along the case and bracelet. When clothed in 18K pink gold, the Laureato Chronograph proves its ability to be precious while losing none of its natural charm.

Intended for men of sure taste with a keen interest in culture, fashion and aesthetics, the Laureato Chronograph aims to ensure impeccable daily comfort, whatever its owner’s morphology. It is a logical extension of the quest for ergonomics that governed the creation of the Laureato, and which is duly honoured by the Laureato Chronograph. This flexibility represents a certain form of elegance, a tangible manifestation of its stature as an authentic watchmaking icon.