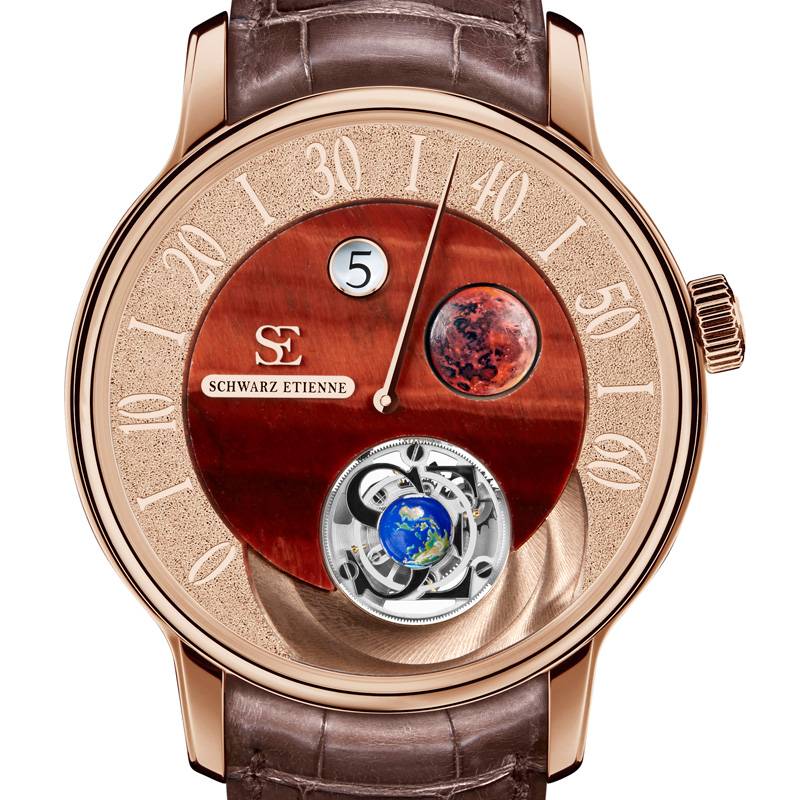 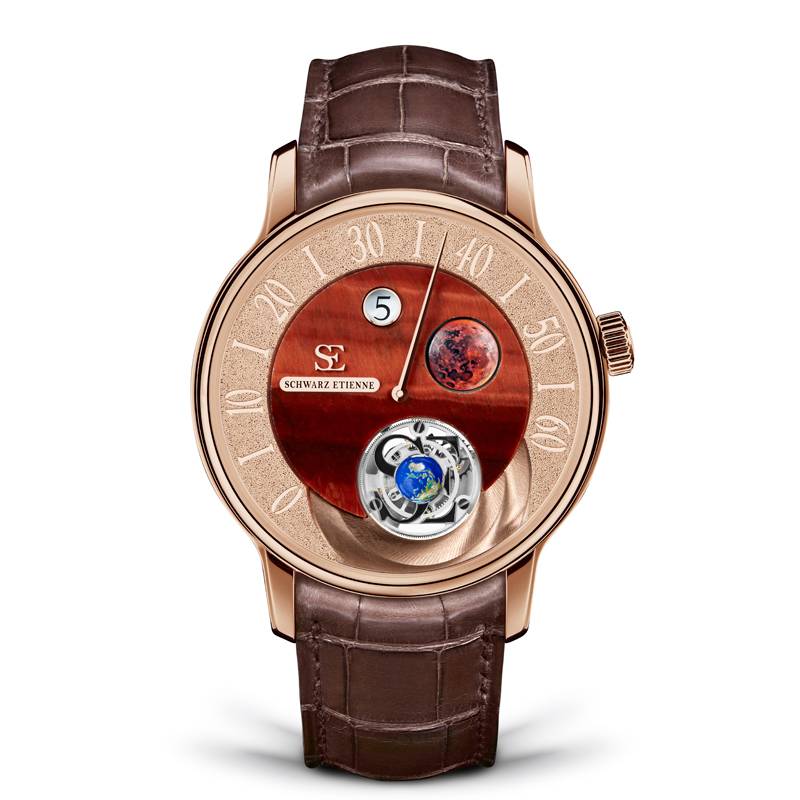 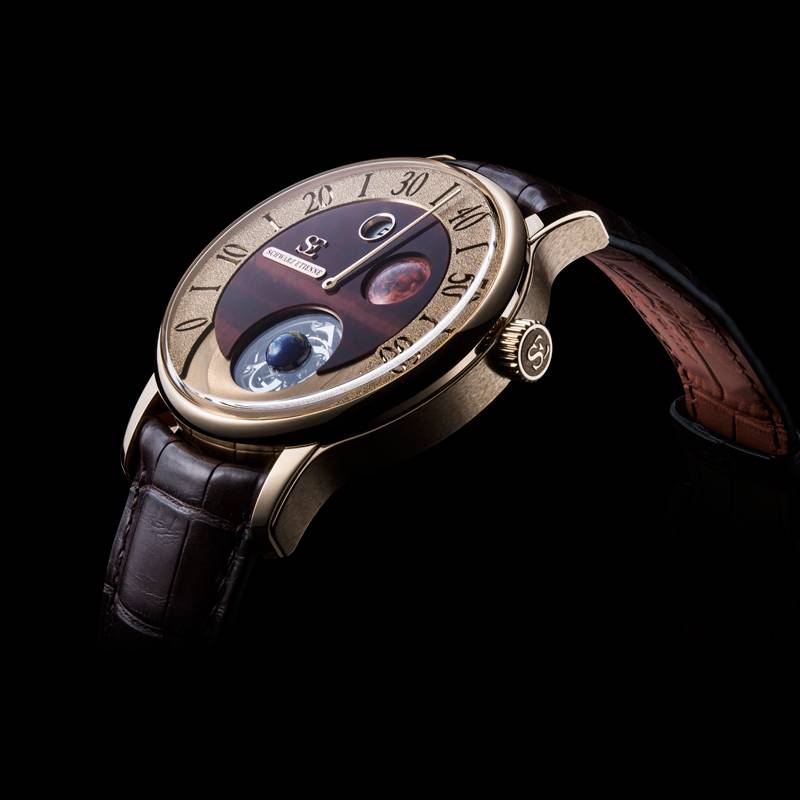 La Chaux-de-Fonds is indeed a place in haute horlogerie where the sun never sets. Great families have given Swiss watchmaking its international renown and made La Chaux-de-Fonds a prestigious watchmaking metropolis. Schwarz Etienne is one of those families. The namesake company was set in motion in 1902. Since then, it has been driven only by the desire to innovate, through its creations, its manufacture movements and its pioneering components. Its watch range is constantly evolving, giving reign to a boundless creativity, peppered with originality and a pinch of madness thrown to the winds of inspiration that blow from the Neuchâtel Mountains.

After having launched three new movements in 2013, the Schwarz Etienne watchmakers drew inspiration from the stars to give birth to two new creations this year, Roswell and Ode à la Semaine. Because star-gazing echoes the contemplation of life passing by. Because the conquest of space goes hand in hand with that of time.

And because stars have been seen as they dropped down from a sparkling sky over the Neuchâtel Mountains onto the eyes of passionate watchmakers, ready to challenge the laws of the universe to achieve a know-how second to none. The mastery of time.

From the Neuchâtel Mountains, the sky one admires is pure, black, intense. It is so dense that one feels as if one is touching the origins of the world. An inexhaustible source of inspiration to which the Schwarz Etienne watchmakers wanted to pay homage with a unique case, Ode à la Semaine. An outstanding tribute to the cradle of Swiss watchmaking, their homeland and the source of a regional expertise, born out of the enthusiasm of craftsmen for an unparalleled art.

Ode à la Semaine is also a tribute to the maelstrom of stars from which the Schwarz Etienne watchmakers draw the unique expression of their tradition.

Planets have always intrigued men. Every day, every night, the moon takes hold of the tides, of sleep, and the sun makes light work of life on earth. The stars influence time, astronomy interferes with men’s lives.

Aren’t watch movements an extraordinary metaphor for our solar system? Each planet turns around itself and around the others in a perfect perpetual revolution. Like the complex rotation of the workings of a watch, that gives each second the strength it needs to move forward. Thus, the art of watchmaking makes fun of astronomy.

Ode à la Semaine is an outstanding case with seven exclusive timepieces, representative of the finest Swiss watchmaking expertise. Seven manual Tourbillon Schwarz Etienne (TSE) movements, each distinct and unique, featuring retrograde minute and jumping hour hands. Seven watches, each dedicated to a day of the week. Because every day counts. And each day makes reference to a planet in the solar system, hence the name.

Each dial contains a different stone, encasing a painting of its star, from Jupiter to Venus, together with a reproduction of Earth. The miniature dial paintings are entirely made by hand by André Martinez, a craftsman from Le Locle, and capture the watchmaker’s thoroughness and precision.

The crown follows the course of the days and moves around the case from Monday to Sunday. It’s a movement that adopts the rotation of the planets, dresses in Mars red, moon grey, and offers a different face to each timepiece in the case; the dial alternately becomes solar, lunar or Saturnian.

The cases are in pink or white gold, according to the colour corresponding to the star represented. The stones in the pieces in the centre of the dial were chosen to evoke the texture and shade of the planets in our universe, in a sober, delicate combination of materials and colours.

This exclusive collection of seven timepieces is presented in a fine hand-painted case of precious wood. It instantly provides a plunge into the Ode à la Semaine universe through a lit porthole that highlights the timepiece of the day of the Sun, Sunday.

The tourbillon movement was invented by Abraham-Louis Breguet, from Neuchâtel in the early 19th century, to counter the heavy effect of pocket watches. Today, the Tourbillon (TSE) movement of the Schwarz Etienne manufacture, designed in collaboration with the House of Chronode, is a work of art.

The Tourbillon (TSE) Ode à la Semaine manual calibre is composed of retrograde minutes and jumping hours. In a version of the TSE La Chaux-de-Fonds movement, created in 2013, Ode à la Semaine brings to light the radiance of his home town which was, and still is, his land, his inspiration. The TSE calibre particularly allows the Schwarz Etienne manufacture to present seven timepieces which distill the tradition of know-how perfected by the greatest watchmakers.

Comprising a tourbillon cage exquisitely adorned with the SE logo surmounted by a sapphire bridge, the TSE calibre redefines the limits of precision. It incorporates a mobile cage tracing one rotation per minute and comprising all the escapement pieces, and its virtuoso design, impeccable finish and technical sophistication allow for the variations in rate to fully cancel each other out when the watch is in the vertical position.

A single glance is enough to break into the heart of the high precision mechanism visible through the sapphire case, which at once unveils it and preserves its unchanging delicacy.

One day, one planet

Each day of the week corresponds to a planet in the solar system, from which it takes its name in most European languages. Thus, the Moon is taken with Monday, Mars with Tuesday and so on, up to the Sun in its zenith on Sunday.

The Moon, Earth’s relentless natural satellite, promises to erase the frantic beginning of the week in a celestial candour. With a white gold case, the first Ode à la Semaine timepiece has a white opal dial, an iridescent black-streaked stone, evoking the silent lunar seas. According to belief, it brings everything to light, illuminating what needs to be lit. Like the moon, which opens the door to night. Its crown is located at 13 hours, the first of the seven positions.

The deep red planet Mars gave its name to Tuesday. Its pink gold case welcomes the bull’s eye, overpowering the dial with its earthy red hue. This stone heralds energy and courage, so Tuesday is a day of decisions and assertiveness. Its crown is positioned at 14 hours.

Mercury, the messenger, the god of trade and travel, the first planet in the solar system and the closest to the Sun, has the upper hand on the third day of the week, Wednesday. The third timepiece in the case is inspired by Mercury’s serene force, offering sober grey and white shades in a dial provided with panther fire. The waning crown has stopped here at 16 hours.

Thursday takes its name from Jupiter, a planet in warm, orangey colours, and the god of the earth and the sky. Jupiter holds lightning a thousand times more powerful than any observed on earth. Bubbling fire which embraces an orange aventurine dial, set in a pink gold case. Orange aventurine is a stone that ensures prosperity and creativity to those who are bold enough to take hold of it. Its crown ends its course on the right-hand semicircle of the case, at 17 hours.

Friday, a day devoted to absolute beauty, is linked to Venus, a star with its own dynamics, just as beauty evades rationality. The fifth Ode à la Semaine creation is decked out in ochre, the aura of this distant planet which can occasionally be glimpsed in the sky before it hides away. This timepiece is adorned with bronzite, a bronze-coloured stone, which will perfectly suit the transience of every weekend. On its white gold case, the crown has moved to 20 hours.

The name of Saturday derives from Saturn. The most recognisable planet, thanks to its famous rings, it is also the most mysterious. Captured in a white gold timepiece, whose crown wanes at 21 hours, Saturn is represented by a tiger’s eye dial, a stone tinged with golden yellow and brown, whose lines evoke its rings. A protective stone, it brings warmth and energy.

Lastly, the Sun, the master of life on Earth, takes a day of rest, bequeathing its power to Sunday. The royal planet in the galaxy, the sun bedecks itself in yellow jasper to make the last timepiece in this sumptuous case shine under its rays in a pink gold case. Before resuming its unchanging cycle, the Ode’s week ends with a crown position at 22 hours.

At the heart of this astral symphony, André Martinez, the master of the miniature from Le Locle, imagined and executed on each timepiece two miniature paintings of extraordinary precision; enlivening the top of the dial, the first represents the sovereign planet of each piece. On the tourbillon cage, the miniature artist has also created a view of the Earth, seen from a different angle on each of the seven watches in the box. This work is evidence of a rare expertise, and harmoniously completes Ode à la Semaine, a truly epic poem in seven acts that narrates the ineffable course of time.

On returning from travelling

The incitement to travel does not stop at the dial. To give life to the back of the piece, the TSE – Ode à la Semaine movement is revealed very close to the glass, as if to complete the experience from the infinitely great to the infinitely small.

Lastly, the start theme is wrapped up in the stitched alligator strap. When one turns the watch around to admire the movement, the assertive colours of the planets reverberate underneath to illuminate the calibre. Indeed, the inner linings, also in leather, recapture in perfect harmony the colour range displayed by the star represented and the stone used.

Because the Ode à la Semaine watches have no hidden face.