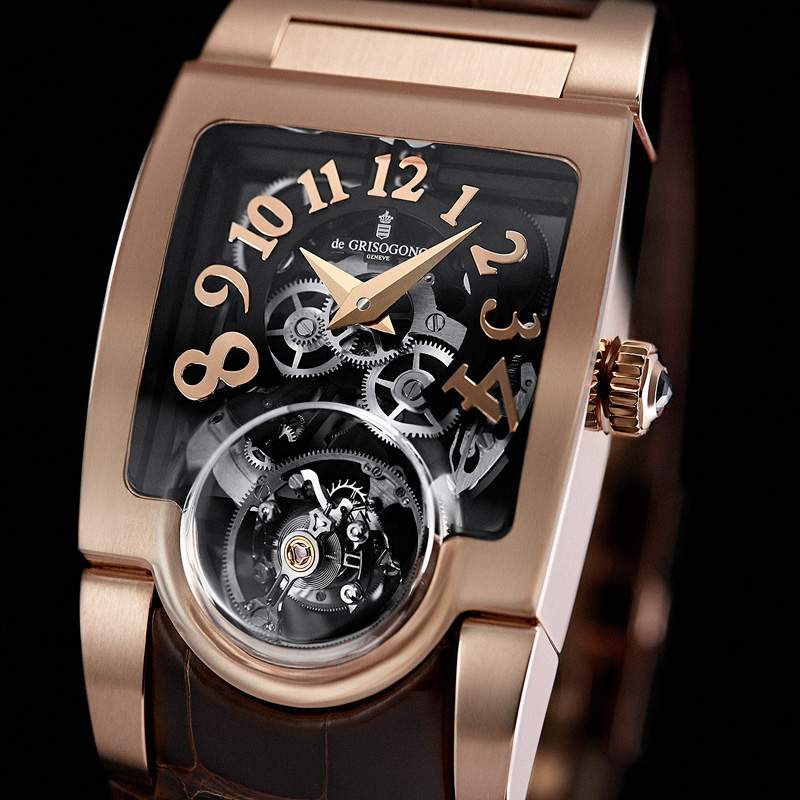 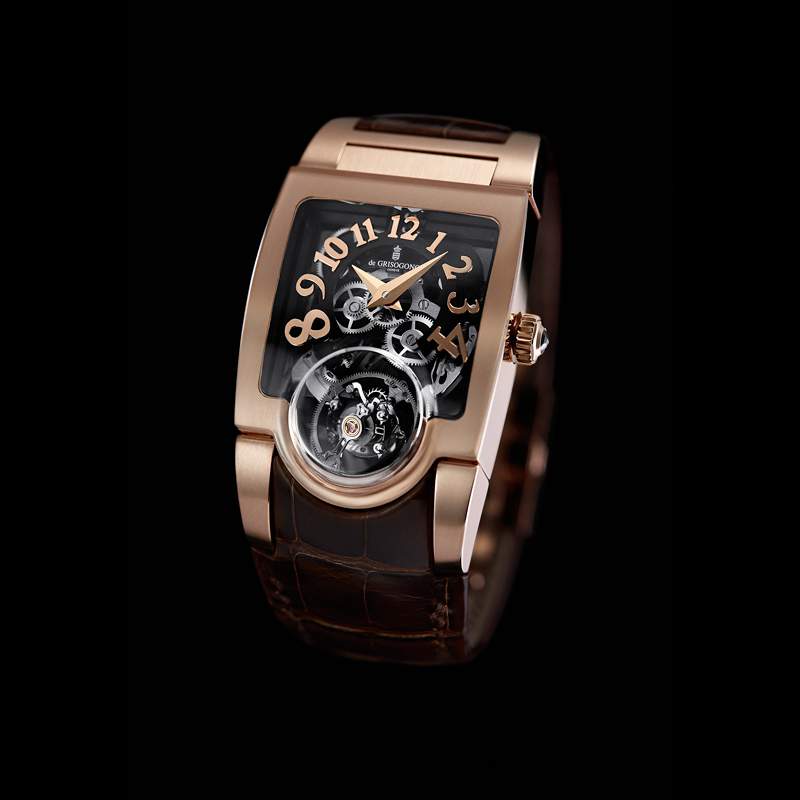 A tourbillon flying inside a sapphire carriage: while at first sight some mechanisms can appear deceptively simple, they often prove to be far more intricate. de GRISOGONO unveils an elegant and unparalleled complication. Calling upon its avant-garde mind-set and daring expertise, it has created a wristwatch equipped with a flying tourbillon featuring an inclined balance-staff. de GRISOGONO presents a daring evolution of a technology developed by watchmakers of the past, such as Richard Daners. At the time, the movement had been designed for a pocket watch and was already considered a highly complex version of a tourbillon. According to the literature, Richard Daners had drawn inspiration from the work of his peers, and notably the flying tourbillon created by Alfred Helwig; as well as the first tourbillon with inclined balance-wheel developed for travel clocks and built by Albert Potter in 1860. Since then, only a handful of watchmakers have experimented with the field of tourbillons featuring inclined components.

In offering a highly technical and sophisticated complication, de GRISOGONO has significantly improved all the key assets of a tourbillon movement. By successfully modifying and given a whole new lease on life to a legendary complication, it is once again asserting its place at the very peak of contemporary horology. Flaunting an original and audacious case construction, the INSTRUMENTO N°UNO TOURBILLON watch offers a clever play on its geometry and transparency.

Paying an authentic tribute to the great watchmakers who wrote the watchmaking history, de GRISOGONO reinterprets one of the supreme horological complications – the tourbillon – in a timepiece combining age-old arts and ultra-modern techniques. A mechanism that is entirely innovative in terms of both size and structure which has been placed in 2015 at the heart of a wristwatch. A journey through time, a technological breakthrough that goes well beyond merely miniaturising Daners’s creation.

Considered one of the most fascinating expressions of the watchmaking art, the tourbillon improves the precision of a watch by reducing the effects of gravity. Since its invention in 1801 by Abraham-Louis Breguet, the tourbillon has been constantly perfected and notably with regard to the optimisation of its rotation system.

Given that the position of a wristwatch frequently shifts between vertical and horizontal planes, the effect of the tourbillon is less pronounced, since the plat-pendu phenomenon lead to a loss in timekeeping performance in watches equipped with this device. To alleviate the problem of gravity’s influence on a wristwatch escapement independently of its direction, de GRISOGONO has gone beyond the traditional tourbillon to create a flying tourbillon fitted with a balance-staff inclined at a 30° angle. The choice of the 30° slant was determined by both technical and aesthetic reasons. On the one hand, this angle improves precision by placing the balance-staff in the best possible position; and on the other, on an aesthetic level, a larger angle would have implied significantly increasing the height (thickness) of the model in order to leave enough space for the flying tourbillon. This optimal inclination brings notable improvements and perfectly compensates for the variations in rate stemming from the plat-pendu phenomenon. The INSTRUMENTO N°UNO TOURBILLON is a time-measuring instrument ensuring stable rate in all positions.

After three years of R&D, the de GRISOGONO tourbillon comprises all the most sophisticated technical characteristics of the Daners movement, but which have been taken much further. Stemming from a brilliant and revolutionary idea, this movement perfectly embodies the spirit of de GRISOGONO: apparent simplicity belies supreme complexity. The goal was to ensure that the regulating organ remains inclined in relation to the ground, in almost all situations. To achieve this aim, de GRISOGONO reached the conclusion that it was more appropriate to incline the balance-staff than the tourbillon itself. While maintaining the same degree of precision, de GRISOGONO worked on the tilt of the balance-staff, yet deliberately kept the rotation axis of the tourbillon carriage parallel to the movement. This clever idea serves to technically eliminate variations in rate and thereby significantly enhances precision.

In terms of rating, given that the tourbillon carriage and the balance-staff are no longer on the same plane, this movement required the development of specific measurement techniques designed to achieve the best possible average between the rates.

In a classic tourbillon, the carriage is held on one side by a bridge and on the other by a pivot, or indeed sometimes by two bridges on either side. de GRISOGONO tourbillon features a ceramic ball bearing mechanism that notably ensures greater shock resistance. In creating its tourbillon with inclined balance-staff, de GRISOGONO has chosen a flying tourbillon affording the advantage of maintaining identical precision whatever its angle of tilt. The construction of a flying tourbillon is far more complex and above all its aesthetic is even more fascinating.

In order to achieve a high degree of isochronism, the parts composing the tourbillon are made from low-density materials that make them extremely light. The flying tourbillon performing one rotation per minute (the most usual cadence) has been offset to 6 o’clock, an original choice that highlights the ingenious construction of the watch and asserts the distinctive character of de GRISOGONO creations. Moreover, its escapement has also been modified and is now also inclined, revealing an original cone-shaped gear for the fourth wheel (driving the seconds) and the pinions. The latter called for extremely accurate production and assembly in order to ensure perfect meshing.

This wealth of well-mastered details is on display beneath an elegant and daring three-dimensional sapphire lens. An authentic work of art, the INSTRUMENTO N°UNO TOURBILLON catches and holds the gaze, not only because of its originality but also because of the exceptional view of its patented mechanism.

The architecture of the watch plays on transparency and allows the flying tourbillon with inclined balance-staff to work its visual magic. The INSTRUMENTO N°UNO TOURBILLON houses a rectangular-shaped movement in which the mechanical components and their aesthetic signatures are fully revealed through the see-through case. In a nod to the brand’s jewellery background, the spoke of the skeleton-worked oscillating weight is adorned with a diamond-shaped opening.

As far as the movement’s technical characteristics are concerned, it is equipped with a twin barrel and has a three-day (72-hour) power reserve. Its mainplate and bridges are skeleton-worked, graced with polished angles and clothed with a matt black PVD coating. Its 266 parts are accommodated within a total volume measuring 9.29 mm thick, 26.8 mm wide and 34 mm long. The tourbillon itself is composed of 62 parts weighing just 3.6 grams.

Beneath the subtle play of light and shade, the INSTRUMENTO N°UNO TOURBILLON asserts its open-minded spirit. The original design of the INSTRUMENTO N°UNO has been technically and aesthetically modified. de GRISOGONO has developed a totally innovative case with redesigned proportions reaching a generous volume of 59.2 mm x 33 mm x 14.99 mm, composed of a hybrid sapphire and precious metal structure and fitted with an original aperture at 6 o’clock revealing the off-centred tourbillon. The unique construction of its case is composed of rose or white gold, while the bezel as well as the case-back are all made of sapphire – a material known for its extremely resistant properties and one of the hardest in the world at 9.0 on the Mohs scale. This understated aesthetic is accentuated by the absence of screws on the bezel.

Further reinforcing its unique character, the INSTRUMENTO N°UNO TOURBILLON has no dial. The hours are marked off on a horseshoe- shaped flying disc directly placed on the mainplate and bearing the emblematic de GRISOGONO stylised Arabic numerals.

The INSTRUMENTO N°UNO TOURBILLON watch radiates an avant-garde and boldly assertive character whose design aims to ensure a full and unobstructed view of the tourbillon while rendering it visible both from the dial side and through the case-back. The flying tourbillon whirls beneath a three-dimensional lens entirely made of sapphire. The dial is distinguished by an understated flying disc topping the movement and bearing the iconic stylised de GRISOGONO Arabic numerals. The crown set with a black diamond also features an original structure in that its heart is made of rose or white gold clothed in sapphire.

With its INSTRUMENTO N° UNO TOURBILLON model, de GRISOGONO confirms that design and expertise are two inseparably entwined worlds, and that a subtle alliance of its creative and technical assets has enabled the Geneva-based jeweller-watchmaker to provide a truly exceptional stage-setting for its tourbillon.