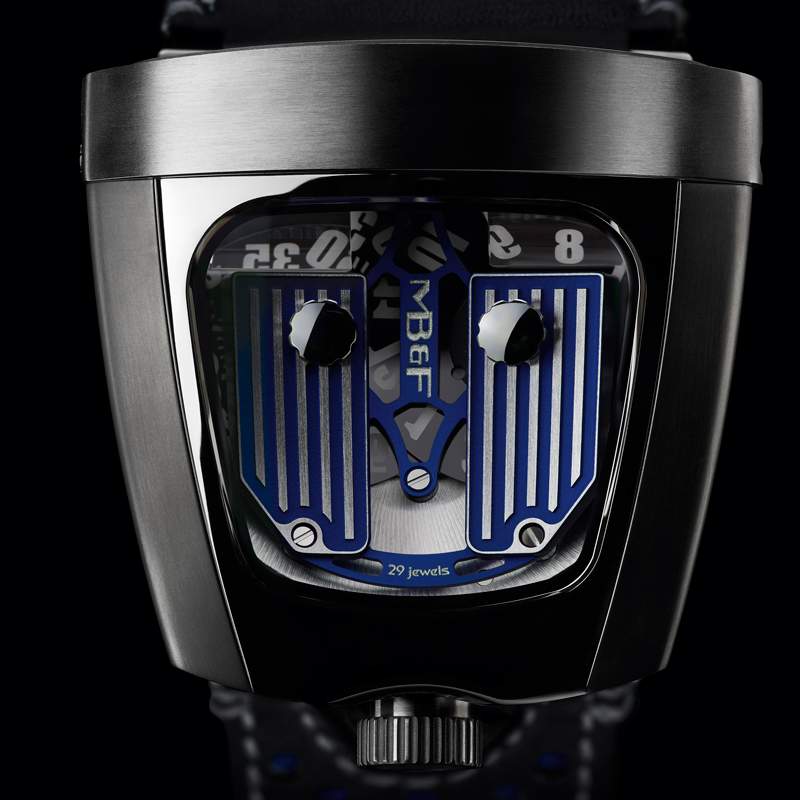 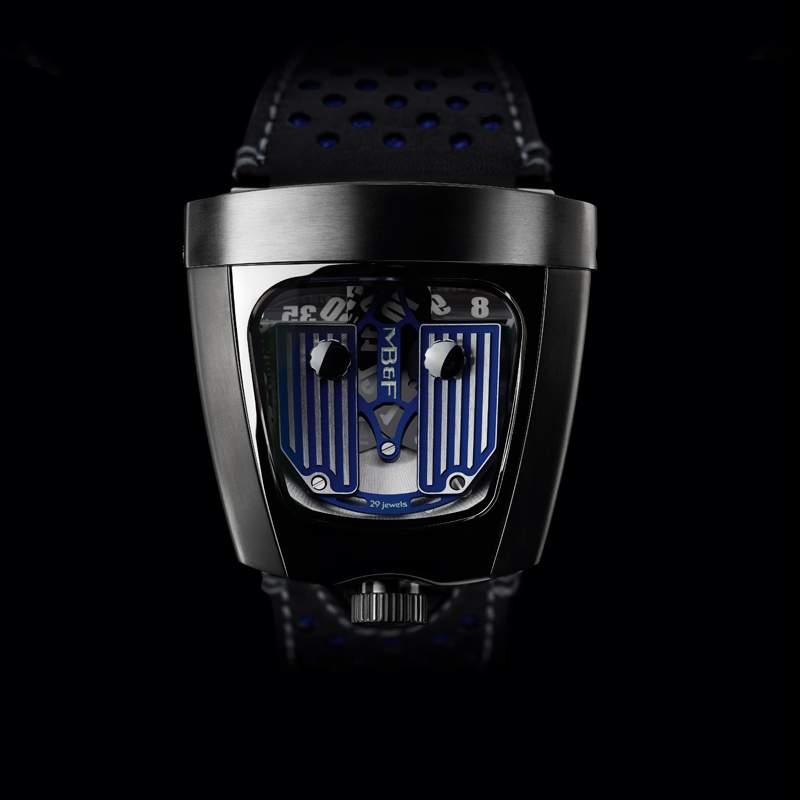 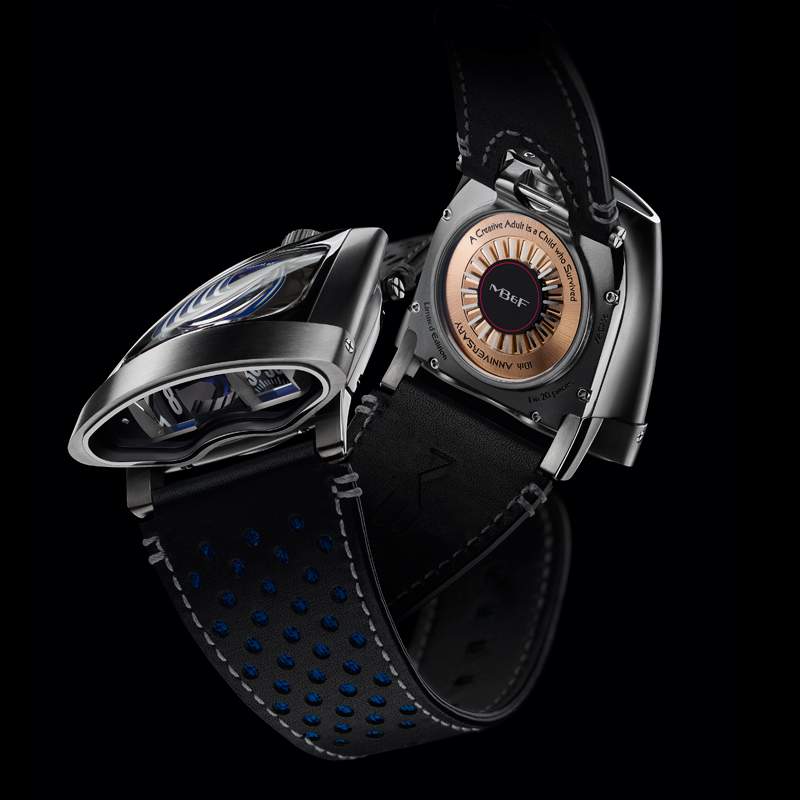 MB&F celebrates its 10th anniversary in 2015, and there is one basic fact about birthdays that is fairly safe to assume: The one celebrating usually gets the presents.

However, for the most significant anniversary of its decade-long existence, MB&F turns that one basic assumption on its head. Rather than expecting to receive, the creative lab has conceived HMX – “X” as in the Roman numeral for ten – as a thank you to the Friends who have supported the brand over the last 10 years. Instead of developing an ultra-complicated, ultra-expensive anniversary piece – standard practice in the luxury watchmaking world – MB&F has cut sales margins without sacrificing quality, offering a true Horological Machine at an unprecedented price.

Paradoxically, creating such a Machine also made HMX one of the most difficult to develop as MB&F considered, tested and rejected a plethora of combinations of forms, finishes and details before being satisfied that everything was "just right".

A creative adult is a child who survived

The tag line for MB&F's 10th anniversary is “A creative adult is a child who survived”, a reference to a child's sense of wonder and awe that usually fades under the onslaught of the everyday realities of reaching adulthood.

As a child, MB&F founder Maximilian Büsser dreamt of becoming a car designer and his sketchbooks were full of drawings of the supercars of his imagination. The automobile-inspired HMX is proof positive that the child in Büsser survived.

HMX displays bi-directional jumping hours and trailing minutes. Apparently simple, but it is how and where the time is displayed that makes HMX so special. Rotating discs on top of the movement feature mirror image numerals. These are reflected 90° and magnified by two sapphire crystal optical prisms that "project" the time onto the front vertical display. Light streaming through the transparent engine cover both illuminates the top of HMX's engine and backlights the time display for high legibility.

Also visible through the sapphire crystal engine cover are supercar-inspired dual "rocker covers" on top of the movement, each featuring shiny chrome oil filler caps. These oil caps are not just pretty design elements, but are fully functional oil caps that the watchmaker unscrews to oil the jewelled bearings for the indication discs.

An automatic winding mechanical movement provides HMX with power, its "fuel" topped up by the 22K gold rotor visible through the display back.

10 years is an important milestone for anyone, but it is an especially significant anniversary for a small, horological creative lab that persistently bucks trends, zigs when others zag, and creates three-dimensional kinetic Machines rather than watches. When Maximilian Büsser founded MB&F in 2005, he hoped that a few collectors might be brave enough to follow him into unexplored horological territory, but had no idea just how big a revolution MB&F would ferment.

"From the beginning, the idea for HMX was to give something back to our Friends: the collectors and supporters who were vital in enabling MB&F to reach its 10th anniversary”, says Maximilian Büsser. “The industry norm for anniversaries is to develop ultra-expensive pieces, but we decided to do the opposite: HMX is by far our most affordable Horological Machine to date and is our way of saying thank you."
HMX was nonetheless one of the most difficult Machines to develop as MB&F considered, tested and rejected a plethora of combinations of forms, finishes and myriad details before being satisfied that everything was "just right".

Indications: The vertical hour and minute display on HMX are derived from circular discs rotating flat on top of the movement. Each of the two discs (one for the bi-directional jumping hours, one for the minutes) is printed with mirror image numerals that are reflected and magnified by two triangular-shaped optical prisms, reflecting the time onto the vertical forward facing display. A gap between the two prisms allows light to flood onto the Engine from the front as well as the top, and the light coming in from the top backlights the indications, making them even more legible.

The sapphire prisms are wedge-shaped with the angles precisely calculated to ensure that light is reflected from the horizontal indications to the vertical rather than refracted (bent). A convex lens at the front provides the magnification. Sapphire crystal is much more difficult to work to optical precision than glass and it took considerable development and meticulous care in production to create crystals that reflected and bent light without the slightest distortion.

The vertical forward-facing display makes HMX an excellent driver’s watch as there is no need to lift your wrist from the steering wheel to read the display.

As a child, Maximilian Büsser dreamed of becoming a designer of supercars and, like many boys before and since, he filled sketchbooks and notepads with drawings of wild, super-fast cars. However, unlike the majority, a kernel of that boy in Büsser remained with him through to adulthood and with MB&F that kernel has grown and flourished. HMX is a supercar for the wrist!

Because of its utterly unconventional shape, the HMX case is a major challenge to manufacture: Every line, curve, metal, finish and colour has been refined over and over again. The case options were considered for strength, colour, finish and even weight: HMX didn't just have to look good from every angle, it also had to feel "just right", i.e. not too heavy but not too light either. Stainless steel and grade 5 titanium were finally selected as offering the ideal qualities for the HMX case.

“Everything that I do now, I want to look back and be proud of, and I feel this even more strongly than I did 10 years ago”, says Maximilian Büsser. “I'm not satisfied until I feel that everything is perfect, so every single little detail counts, and even more so for an anniversary piece.”

The influences of a number of supercars can be seen in HMX's design cues. In particular, the distinctive Superleggera style of renowned Italian coachbuilder Carrozzeria Touring – creators of automobiles like Alfa Romeo’s Disco Volante – resonates throughout the “coachwork” of the Machine.

The four colours of HMX are all carefully selected motor racing colours: Lotus black, for one of the most successful teams in the history of motor racing; British racing green, which should originally have been red, white and blue, but those colours were already taken by the USA; Bugatti blue, apparently inspired by the colour on Mrs. Bugatti's Gauloise cigarette packets; and Ferrari red, which is the Italian official motor sport colour.