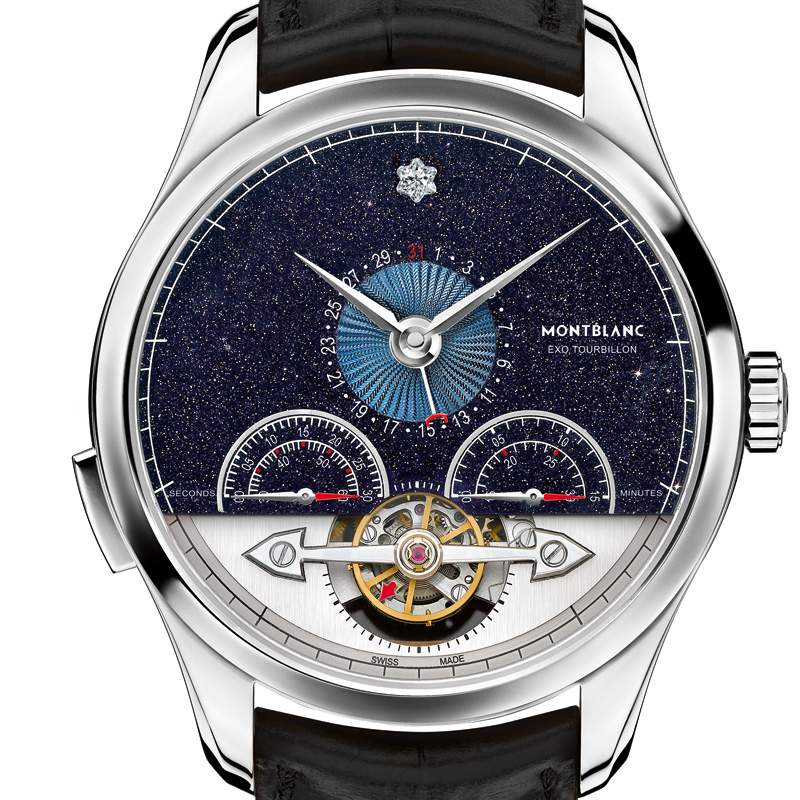 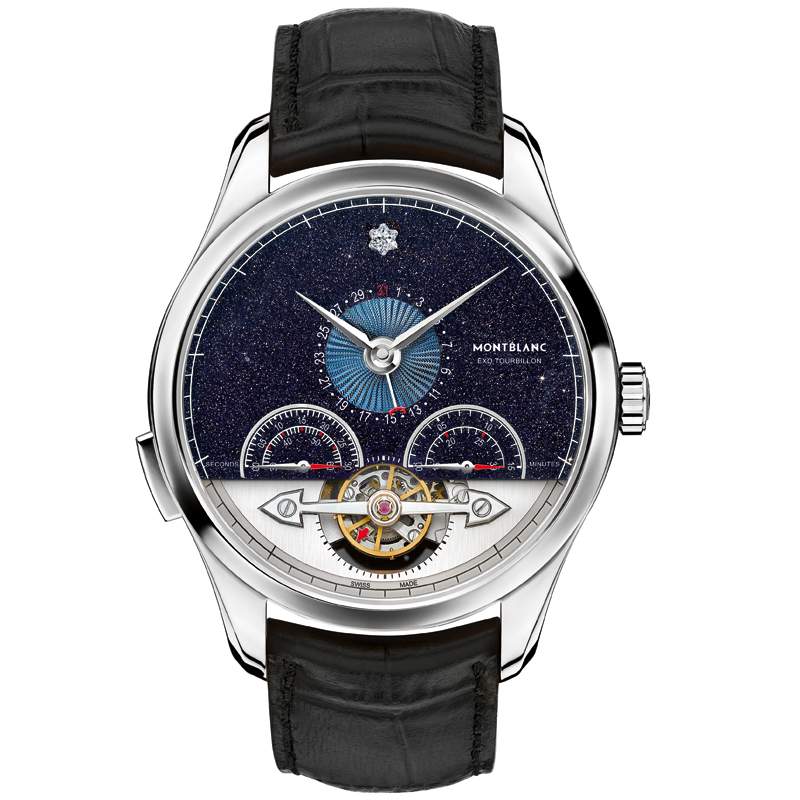 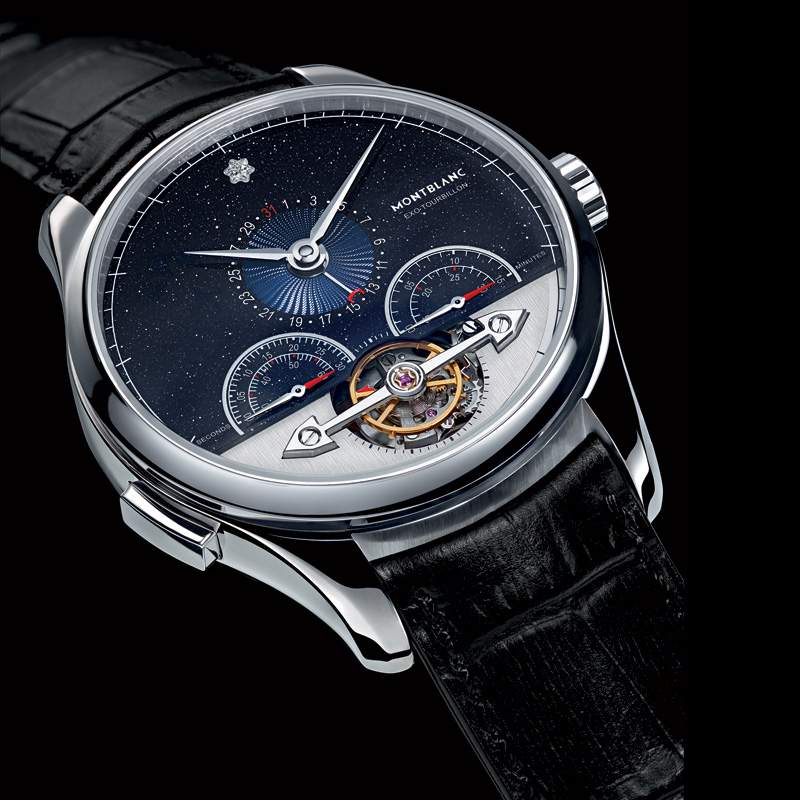 As an horological highlight in the Heritage Chronometrie Collection, Montblanc’s new ExoTourbillon Minute Chronograph Vasco da Gama Limited Edition 60 combines two of the most important chronometric complications: a chronograph to measure the duration of brief intervals and a patented tourbillon construction for absolute precision.

As a consequence of the architecture of a classically constructed movement, the balance’s centre of gravity temporarily strays from the axis of rotation due to the influence of Earth’s gravitational force, which is particularly troublesome when the timepiece is in a vertical position. A tourbillon mechanism compensates for this centre-of-gravity error by enclosing the escapement inside a carriage or cage that continually rotates around its own axis. Gravity’s accelerating effect during the first 180 degrees of the carriage’s rotation is offset by a corresponding deceleration during the second 180 degrees, so the watch’s average rate remains constant.

Montblanc installed a large, massy, screw balance in the Heritage Chronométrie ExoTourbillon Minute Chronograph Vasco da Gama Limited Edition 60. In a traditional tourbillon construction, this large balance would require a correspondingly large and heavy rotating cage. But the innovative mechanism of the ExoTourbillon solves this problem by isolating the screw balance from the rotating cage. The cage is smaller than the balance, which oscillates outside the rotating carriage and on a higher plane. The screw balance is borne between two jewels, while the tourbillon is neither cantilevered nor sandwiched between two bridges, but turns in a two-point bearing at the foot of its staff. The advantage of this construction is that a smaller rotating cage has less mass so it needs less energy to support its rotary motion. The rotating cage per se is also liberated from the weight of the screw balance: this further reduces the amount of necessary energy because the screw balance, which is isolated from the rotating carriage, is not disturbed by the inertia of the carriage. Compared to a traditional tourbillon construction, energy savings of approximatively  30% are achieved, while at the same time increasing the precision. This innovative construction derives its name from the Greek prefix “exo”, which means “outside” or “external”.

With this patented ExoTourbillon construction, Montblanc offers for the first time a stop-second function that directly halts the screw balance by means of a tiny spring. Such a construction rarely accompanies a tourbillon and is very useful whenever the wearer wishes to precisely set not only the hour- and minute-, but also the second-hand. Directly halting the balance in a tourbillon is a more precise construction than arresting the second-hand by halting the rotation of the tourbillon’s cage because the former instantly stops the balance and prevents the “after-swing” that can occur when the tourbillon’s cage is stopped. In order to precisely adjust the time, the tourbillon cage integrates a red marker in form of an arrow, which allows to read the seconds on the respective scale printed on the opening of the dial around the tourbillon.

The Montblanc Heritage Chronométrie ExoTourbillon Minute Chronograph Vasco da Gama Limited Edition 60 is the flagship of the Vasco da Gama Limited Editions. Each of the 60 chronographs in this strictly limited edition boasts several important artisanal refinement. Montblanc’s ticking flagship is naturally affiliated with Vasco da Gama’s floating flagship, the São Gabriel. The pane of sapphire crystal in the case back is adorned with a sketch of the historic sailing vessel, as is the signature of the intrepid discoverer and seafarer. The series is limited to 60 watches in reference to the 60-man crew of the São Gabriel.

The sophisticated dial with different levels and refined finishes reflects the two complications of the timepiece. The upper part embellished with a slice of aventurine, dyed dark blue, catches the eye on the dial, where numerous small dots emulate the starry night sky in reference to the night sky of the southern hemisphere that guided Vasco da Gama on his voyage. A diamond in the patented cut in the shape of the Montblanc emblem sparkles at 12 o’clock. A wave-shaped guilloché, designed in flinqué style and coated with blue paint, in the centrally positioned hand-type date display refers to the nocturlabium (star clock), which was one of the navigational instruments aboard the São Gabriel.

The dial’s lower level is satin-finished and unveils the intricate construction of the ExoTourbillon at 6 o’clock.
This exceptional timepiece is available in a 44-mm white gold case.

Before it is allowed to leave the Montblanc Manufacture at Le Locle in Switzerland’s Jura region, the Heritage Chronométrie ExoTourbillon Minute Chronograph Vasco da Gama Limited Edition 60 must first pass the strict Montblanc Laboratory test 500. This examination, which detects any inaccuracies that may have crept in during the processes of assembly and fine adjustment, guarantees that Montblanc’s customers invariably receive the timepiece of the utmost quality, which is certified by comprehensive and practically oriented tests. The watch that passes this rigorous ordeal is issued its own individual certificate.