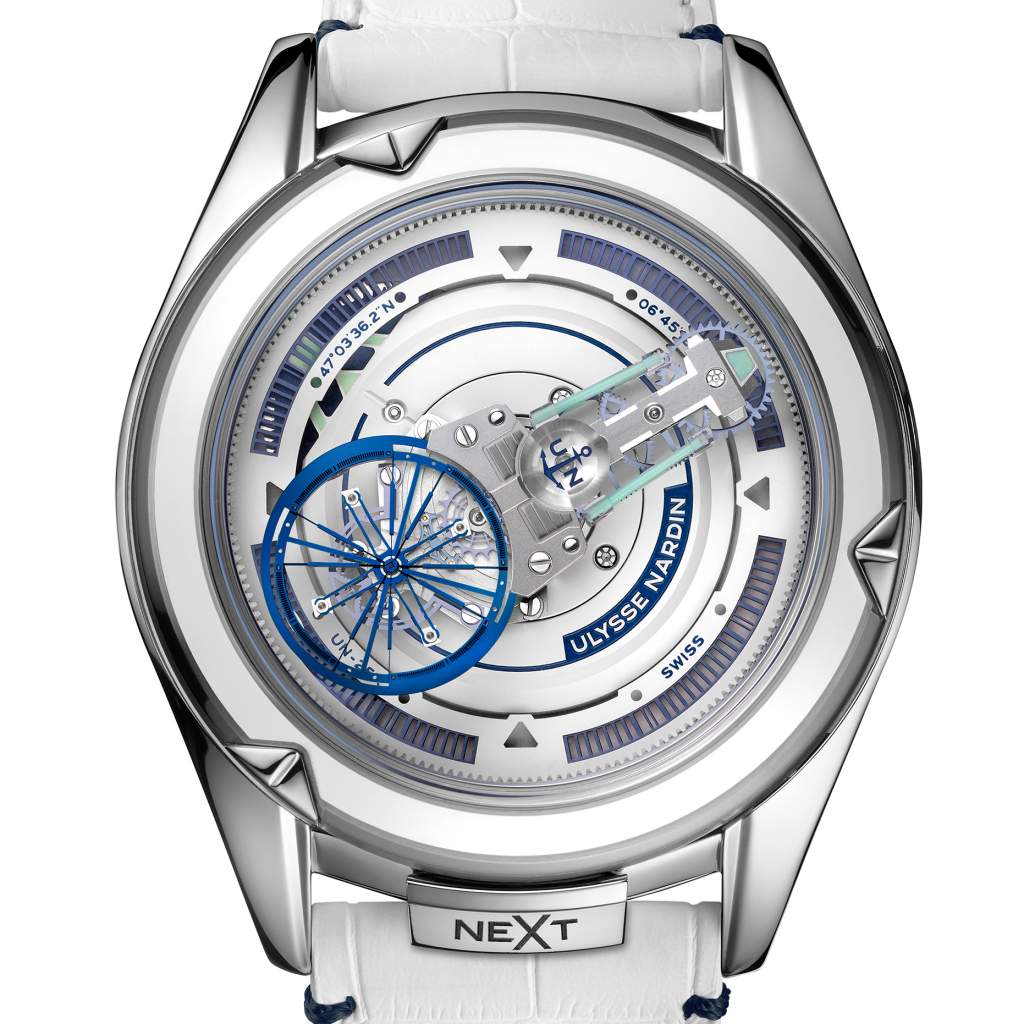 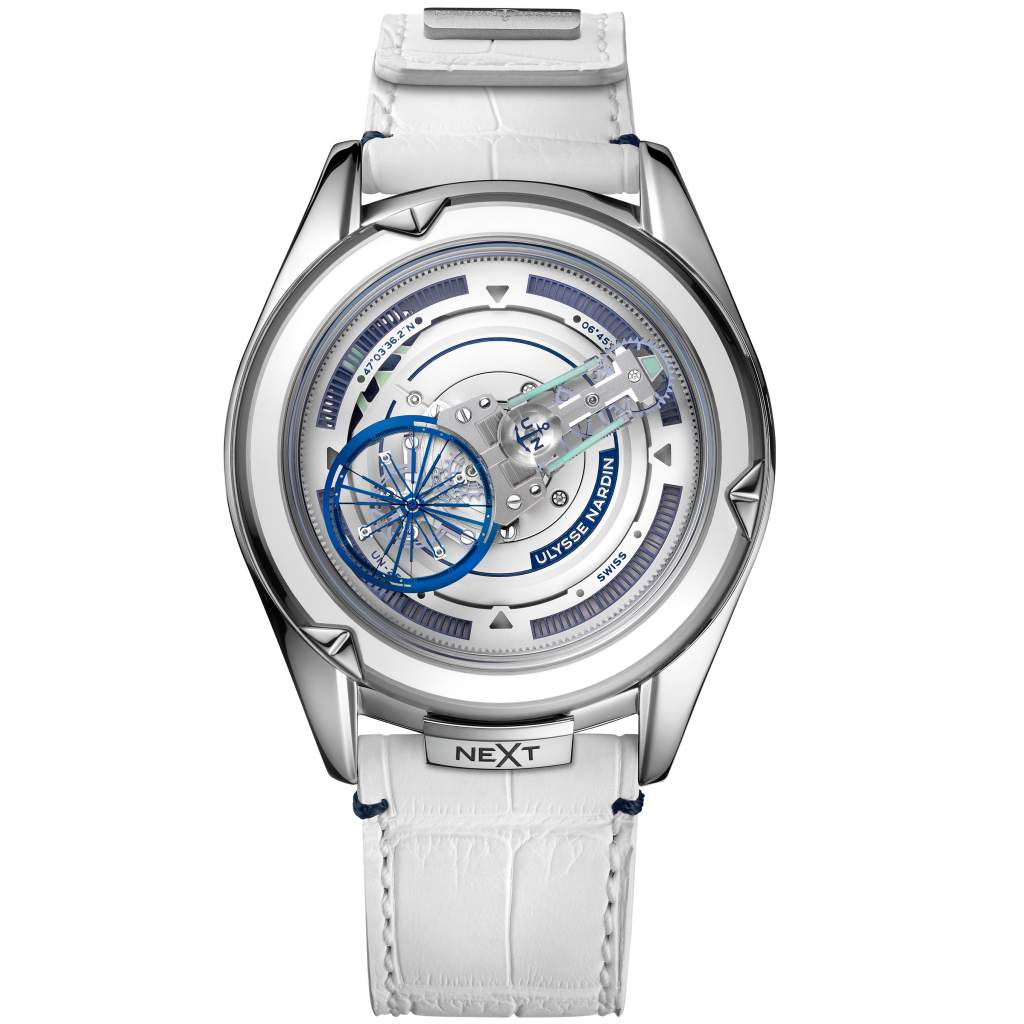 The latest model in the iconic "FREAK" collection, the "FREAK neXt" watch marks a new technical feat for Ulysse Nardin. A showcase for Ulysse Nardin's technological expertise and the flexible silicium blade technology in particular, this piece sets the tone for a new generation of FREAK models to come, where innovation is taken to the extreme. After 10 years of continued research, development and improvements in collaboration with Sigatec – a firm co-owned by Ulysse Nardin that specializes in the production of silicium micro-components – the Manufacture is now in a position to present what appears to be the pinnacle of a paradigm shift in mechanical watchmaking that began in 2015 with the Ulysse Anchor flying escapement: the new neXt flying oscillator.

THE "NEXT" FLYING OSCILLATOR AND ITS 3D DESIGN

"The balance wheel regulates even better as it has a great moment of inertia and performs rapid oscillations of great amplitude." Léopold Defossez

Toying with the limits of the physics of materials, the new Freak neXt flying oscillator presents an entirely innovative 3D design. Based on flexible mechanisms using the elasticity of silicium blades, a principle that is truly mastered by Ulysse Nardin, this oscillating regulating device does away with the central pivot, its center literally suspended in mid-air. The central idea of this regulating organ is to totally eliminate the axis of the balance wheel in order to create a virtual pivot point. This is a radical development that hugely improves the traditional principle of balance spring regulation introduced in the 17th century.  The neXt flying oscillator, with its 3D multi-layer construction – four layers of blades and a solid layer that serves as a flywheel – is a highly significant technological development for watchmaking research. This new oscillator eliminates the necessity for pivots and jewels. The new FREAK features a "suspended" beating heart that "levitates" without a balance-cock (balance bridge).

The direct result of this system is none other than the total elimination of friction on the bearings, optimizing the global quality factor and therefore the movement's energy consumption. The only remaining friction is with the air. No more – or very little – friction, no more contact, no more wear, no more oil. Made up of 32 silicium micro-blades measuring 16 micrometers in width, connected to one another without contact with the mainplate – forming 16 triangles superimposed in 4 parallel layers – the oscillator beats to a highly efficient frequency of 12 Hz, for a remarkable 70-hour power reserve.

But this major innovation comes as no surprise. It is the last stage in a decade of developments for FREAK concept watches at Ulysse Nardin with the 2014 launch of the Ulysse Anchor escapement, followed by the Grinder, also fitted with blades, presented in 2017 on the Freak InnoVision 2 model.

ABOUT THE ULYSSE ANCHOR ESCAPEMENT

The Ulysse Anchor escapement is based on the principle of flexible mechanisms using the elasticity of leaf springs. This constant escapement, made entirely of silicium, presents a circular frame with a fixed anchor at its center that pivots without friction. It is held in the air by two tiny silicium leaves, perpendicular to one another, which are tensioned in order to bend and maintain them in a bistable state. The result is a positive energy balance during the angle of lift that maintains constant oscillations of the balance without being influenced by the variations of the engine torque.

The self-winding "Grinder" system has revolutionized energy transmission as it is twice as efficient as existing systems. The "Grinder" uses the smallest of wrist movements. The oscillating weight is connected to a frame carrying four clicks or blades, which gives the self-winding system twice the angular stroke (like a bicycle fitted with four pedals instead of two). A flexible guiding mechanism considerably limits friction.

A true architectural gem, the FREAK neXt has a high-tech, ultra-contemporary look. It is in immaculate white with phosphorescent touches, applied by Ulysse Nardin's designers to highlight their latest invention. The bridge of the baguette movement (the finishing gear train) has a slightly trapezoidal shape inspired by the spaceships from Star Wars and is framed by four luminescent tubes filled with Superluminova for a phosphorescence effect that is visible only at night. A small logo in the colors of Ulysse Nardin – positioned on a transparent lens made from glass using a subtractive 3D production process – completes the decoration of the baguette movement. Contrasting with the celestial purity of the dominant white, the 3D multi-layer oscillator is chameleon-like: depending on the angle from which it is viewed, it presents glistening blue, purple or green reflections. The new FREAK neXt comes with a white Superluminova bezel, white Superluminova shafts at the sides, as well as a white automatic winding support on the back of the watch. The rubber strap is also white with white stitching and dark blue “point-de-bride” stitches. Evoking purity, simplicity and minimalism, the FREAK neXt is dressed in platinum and titanium. This watch demonstrates the brand's commitment to extending and enriching its collection by taking its watchmaking eXpertise to the next level. The highly sophisticated mechanism opens up new, unexplored horizons for Ulysse Nardin.