Far side of the moon 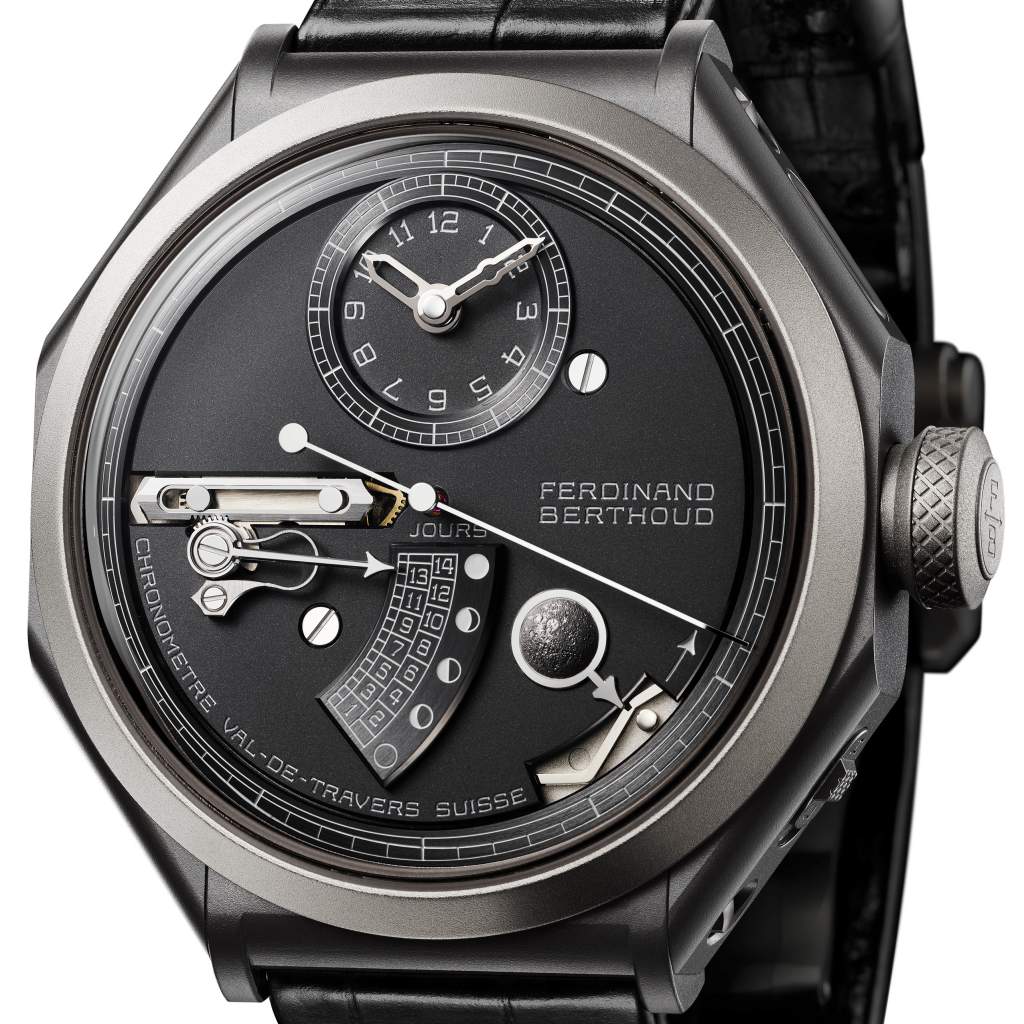 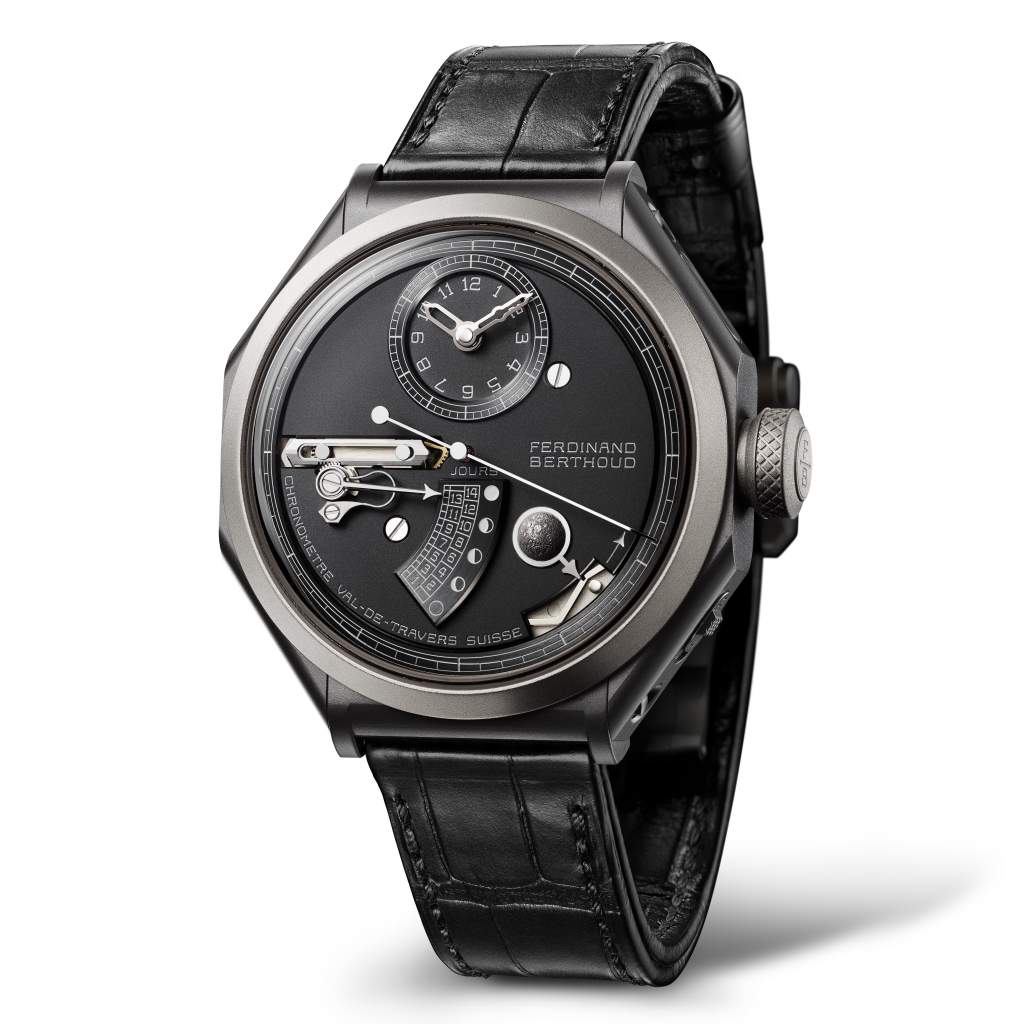 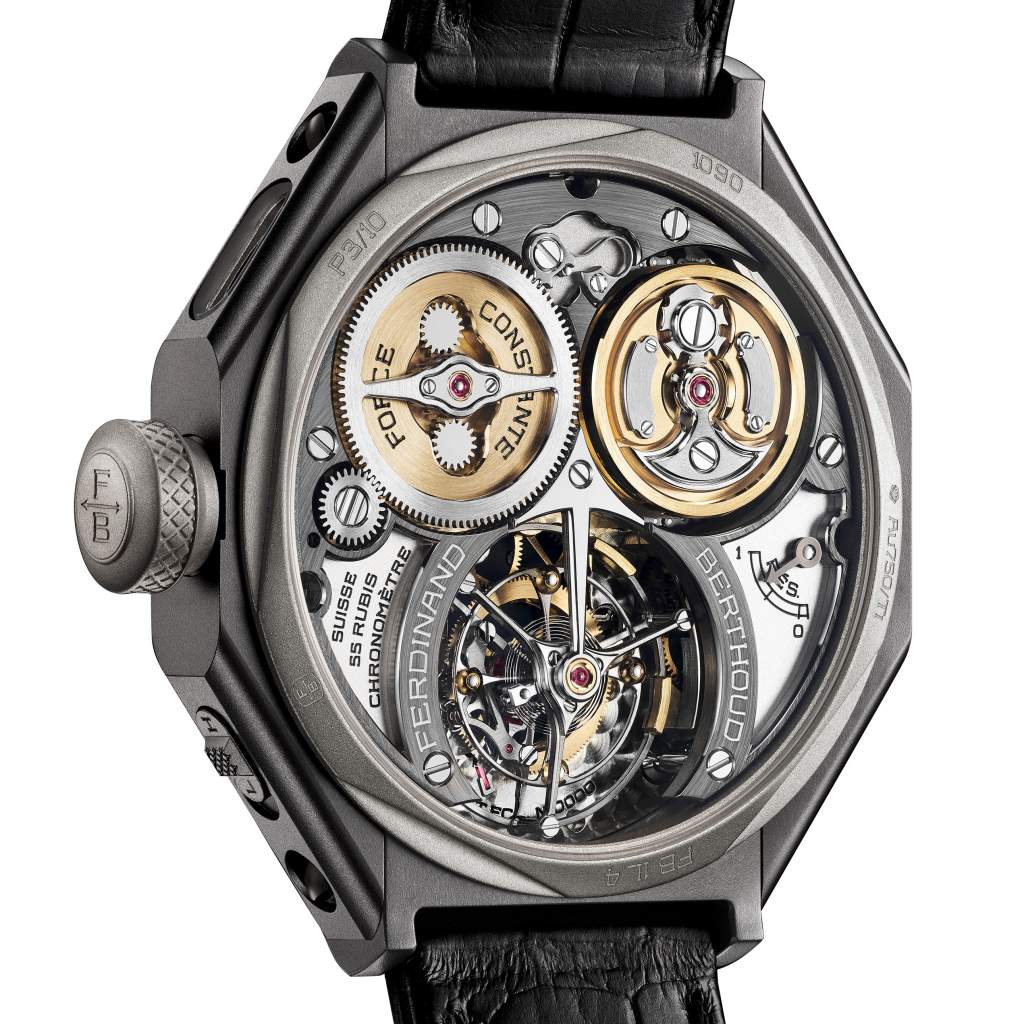 FAR SIDE OF THE MOON

The Chronomètre Ferdinand Berthoud FB 1L.4 – “Far Side of the Moon” is imbued with the scientific spirit of the Enlightenment. It combines the in-house tourbillon movement with a new display of the age and phases of the moon.

Available in a ten-piece limited edition with a case in anthracite ceramised titanium & sandblasted 18-carat white gold, this new collection displays the hours and minutes on a dedicated subdial at 12 o’clock, seconds in the centre and the 53-hour power reserve on the back of the movement. A large hand at 6 o’clock indicates the age and phases of the moon in a continuous back and forth movement. This patent-pending complication, combined with the constant force of the FB-T.FC.L calibre, ensures astronomical precision corresponding to a one-day difference in 577 years of operation.

Truly at the crossroads between astronomy and chronometry, the Chronomètre FB 1L pays tribute to Ferdinand Berthoud's work on chronometric precision and the calculation of longitude. It was to this end that the master watchmaker designed his famous Marine Chronometers, which inspired the creation of the FB 1L collection.

The Chronomètre FB 1L is a model displaying the age and phases of the moon, thus combining astronomical measurement and chronometric precision.

The age and phases of the moon are two separate measurements.

The moon phase is the most common in watchmaking. This is the complication that visually indicates the different lunar cycles. The moon phase is divided into four phases: new moon, first quarter, full moon and last quarter. A lunation or lunar cycle is the time interval between two new moons. A symbolic and aesthetic complication, the moon phase does not, however, offer the accuracy necessary for astronomical use.

The age of the moon is a more accurate indicator which counts the number of days since the last new moon. This veritable scientific measuring instrument, coupled with the chronometric measurement of time, made it possible to determine longitude at sea with unparalleled accuracy nearly 270 years ago.

For the first time, the FB 1L collection combines these two instruments: an indicator of the age and phases of the moon and a chronometer within the same model.

AGE OF THE MOON AND PROGRESSION OF THE LUNAR CYCLE

The calibre FB-T.FC.L features a patented complication. This consists of two indications. The first is the display of the moon's age in days, marked from 1 to 14 on a sector swept over by a hand moving back and forth.  Day "1" is the first day since the new moon. Facing this "1" is a circle symbolising the latter. The next three quarters are spread over the same sector as the days go by. Facing the 14th day is a solid disc, symbolising the full moon. At this point, the hand performs a gradual backward move passing through the same quarters in the opposite direction: three quarters, two quarters, one quarter, until the return to the new moon.

This display of the age of the moon is complemented by another function revealed through a dial opening between 4 and 5 o’clock, showing the current moon phase, waxing or waning, thereby indicating whether the moon-age indicator hand is rising (up to day 14) or returning (to the new moon). Since this hand progresses at a rate imperceptible to the naked eye, this precious moon-phase indication makes it possible at a single glance to see whether one is heading towards a full moon or a new moon.

This age-of-the-moon display is provided by an arrow surrounding a half-sphere accurately depicting the “Far Side of the Moon”.

This original mechanism is inspired by a system for displaying the equation of time developed by Ferdinand Berthoud in 1752. It was based on the use of a feeler-spindle arm that followed an equation of time cam. In this instance, however, it is an age-of-the-moon cam.

This contemporary interpretation serves to provide a disc-free display of the age of the moon by means of a hand moving back and forth with an accuracy of 29 days, 12 hours, 44 minutes and 15 seconds – corresponding to a mere one-day difference in 577 years of continuous operation. This exceptional result is made possible thanks to the large number of teeth on the moving disc revealed between 4 and 5 o’clock.

The Chronomètre FB 1L thus achieves a degree of accuracy in displaying the age of the moon that exceeds conventional moon phase displays, most of which remain accurate over a period of “only” 122 years.

The 100% in-house calibre of the Chronomètre FB 1L features an original suspended fusee-and-chain construction. It delivers a constant force to the escapement throughout the operation of movement, from its first turn of the crown to complete winding, thus achieving a 53-hour power reserve.

The accuracy of each movement in this collection is attested by a chronometry certificate issued by the Official Swiss Chronometer Testing Institute (COSC).

The movement also features a tourbillon with direct-drive seconds, compensating for the variations in rate induced by the different positions the watch adopts throughout the day. Direct-drive seconds are made possible by the correlation between the seconds wheel and the wheel driving the tourbillon carriage.

The distinctively shaped case is based on the architecture of the marine chronometers designed by Ferdinand Berthoud from 1760 onwards, inspired by his Marine Clocks, and their gimbal suspension in particular, which allowed the on-board chronometers to remain permanently in a horizontal position.

For the FB 1L collection, the case was completed for the first time with a selector switch placed between 4 and 5 o’clock which enables the wearer to choose between two positions, L and H, to set the age of the moon or the time.

Issued as a numbered ten-piece limited edition, the FB 1L.4 "Far Side of the Moon" version evokes the dark and mysterious tones of the Moon's hidden face. Its white gold case middle is sandblasted and the lugs and side elements are made of dark grey ceramised titanium. On average four times harder than standard titanium, ceramised titanium is part of the sustainability approach adopted in the making of Ferdinand Berthoud creations, which has already led the Manufacture to develop a carburised steel with similar properties.

A BIT OF HISTORY

What exactly happened at 23 Quai Conti, in Paris? This is the address of the French Académie Royale des Sciences, which became the Académie des Sciences in 1666. It is here that during the 1750s Ferdinand Berthoud submitted several documents, the first forms of patents on his many inventions, under sealed cover.

At the same time, at the same location, the knight Jean-Charles de Borda also submitted his first works as an engineer, a few years later, embarking on various ships to clarify the calculation of longitude. For these missions, he used measuring instruments created by Berthoud.