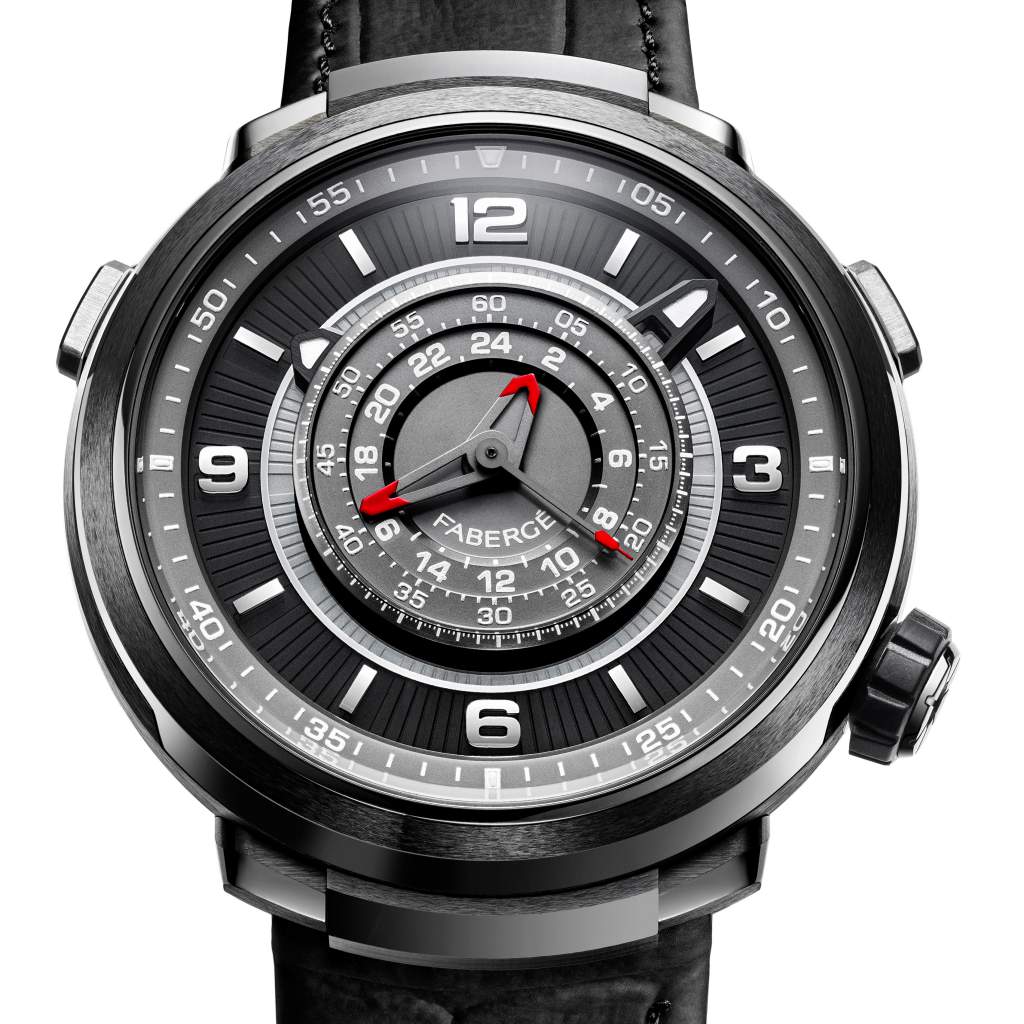 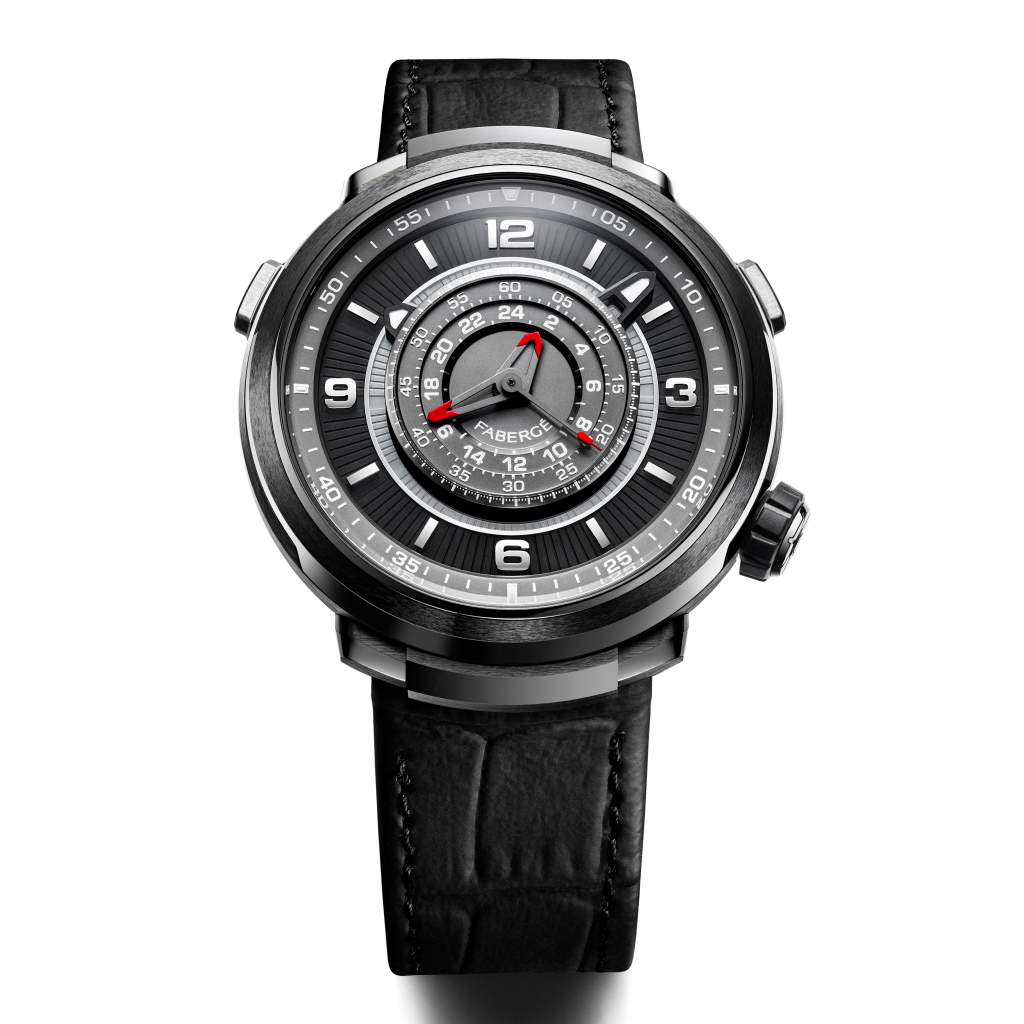 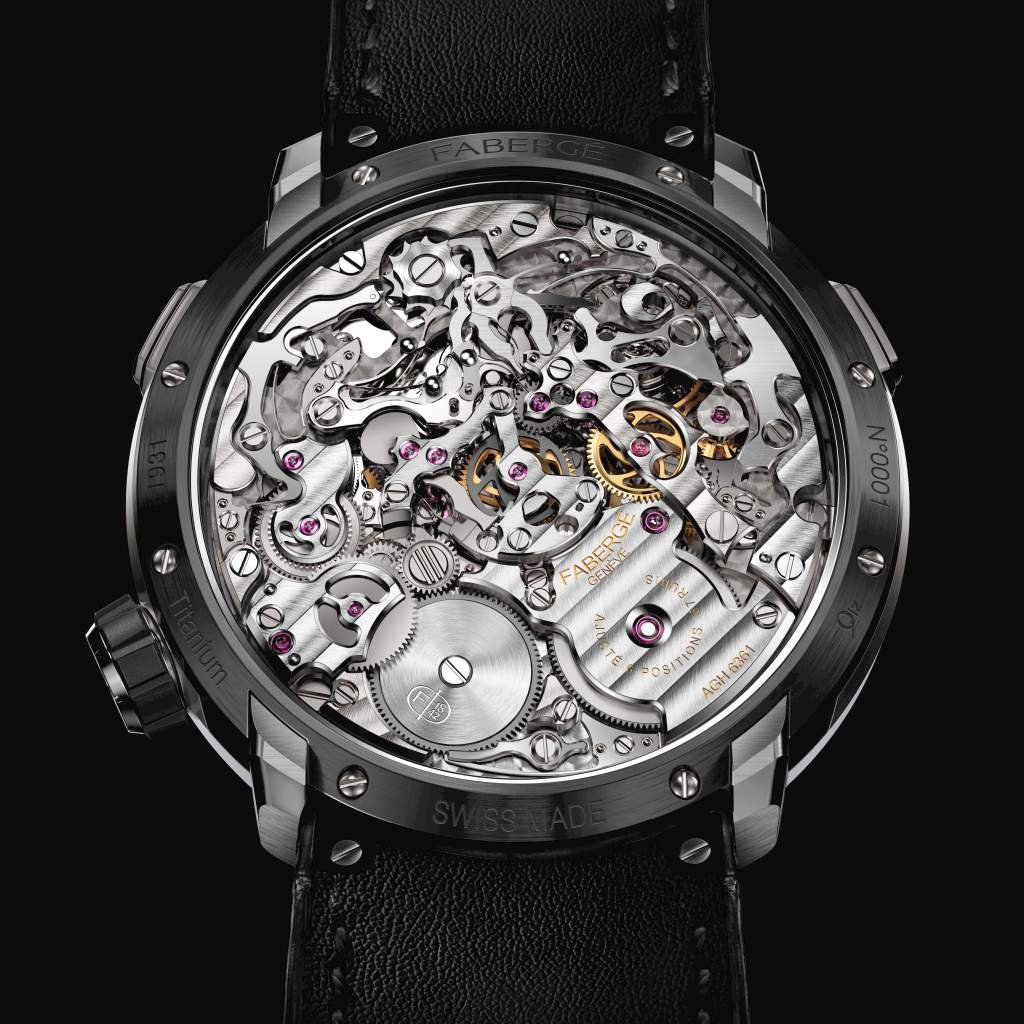 To mark 100 years since the Russian Revolution, Fabergé presents a chronograph of revolutionary significance in the horological cosmos, paying homage to the unfinished Constellation Egg of 1917. The Fabergé Visionnaire Chronograph marks a new standard in charting time. Hours and minutes are read at the periphery of the watch dial while the chronograph function takes centre stage. The automatic calibre 6361, developed in partnership with Agenhor, offers a new intuitive chronograph display that is radically different to any other chronograph ever made. It is the modern-day analogue to a Fabergé egg — a mechanical opus with wonder at its heart. As an homage to the unfinished Constellation Egg of 1917, the Visionnaire Chronograph carries a laser-engraved etching of the egg, visible only to those who know where to seek it.

The Visionnaire Chronograph, powered by the automatic calibre 6361, is a revolutionary new movement that imparts unprecedented clarity, precision and efficiency to the highly popular chronograph complication. Nearly a decade of work and five horologically significant patents are deployed in the calibre 6361, two of which have been specifically designed for the new chronograph movement developed by Agenhor, the Geneva-based movement specialist.

The indications of the Visionnaire Chronograph are displayed centrally, with concentric counters. The outermost chapter ring and minuterie are for time telling, traversed by luminous markers that appear to hover over the dial with no central attachment point. A dedicated central dial is reserved for the chronograph display, with its three co-axial hands. As a result, the Visionnaire Chronograph is remarkably easy to read. It is designed to fit our most natural instincts when reading the time, in contrast to conventional chronographs where the seconds, minutes and hours are each displayed at different places on the dial. This significant gain in legibility is thanks to the unique construction of the calibre 6361, comprising a central chronograph module set within an annular base movement.

In keeping with the theatrical dial first seen in the Visionnaire DTZ, the rotor of the Visionnaire Chronograph is visible under the sapphire crystal ring that forms the outermost part of the dial. As the rotor spins and winds the watch, the radial lines on its surface subtly catch the light, adding a constant dynamism and motion in keeping with a sports complication.

Further precision is provided by the patented AgenClutch, a completely novel, lateral-friction clutch that robustly combines the smooth engagement of the modern vertical clutch with the flatness of the traditional system.

The chronograph reset function has been reworked and improved in the calibre 6361, streamlining both construction and energy consumption. Ingeniously, the snail cams that trigger the instant-advance display also control the reset to zero. The traditional chronograph reset heart cams, reset hammers and high-tension blade springs are no longer needed, replaced in the calibre 6361 by multi-functional snail cams and low-torque spiral springs.

The aesthetic advantage of this system is that the motion of the chronograph hands, as they reset, is unidirectional. The functional advantage of this arrangement is that it dramatically reduces the mechanical stress within the movement. From start to finish, the calibre 6361 has been engineered to reach the highest levels of chronometric performance and mechanical resilience, qualities that play a key role in Fabergé’s aim of obtaining the prestigious Geneva Seal certification.