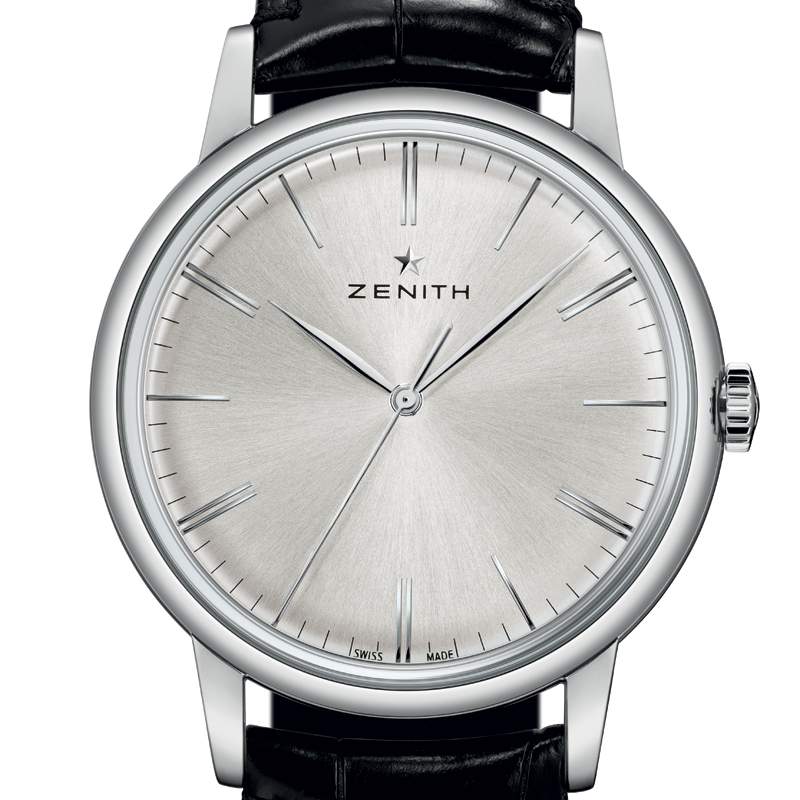 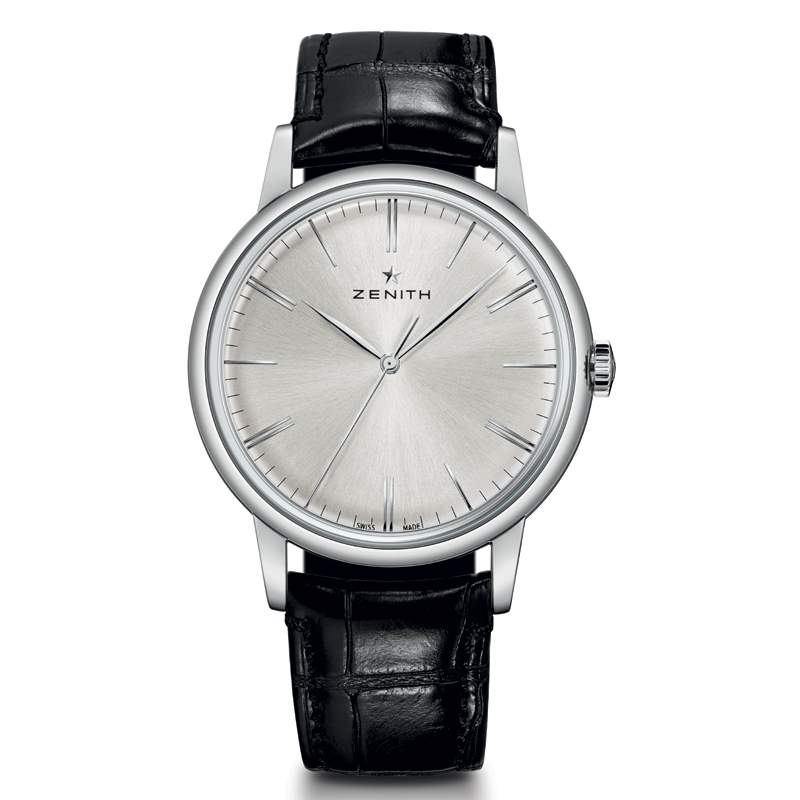 THE RENEWAL OF A FIRST-RATE CALIBRE

Zenith presents the Elite 6150 model equipped with a new Manufacture movement: the Elite 6150 calibre. This new mechanical automatic movement is the contemporary version of the famous Elite base movement developed in the early 1990s – an ultra-thin calibre that earned the title “Best Movement of the Year” when presented at the Basel Fair in 1994. In response to the demands of our times, the Zenith engineers and developers have chosen to enhance its performance, as well as its versatility by means of a minimum 100-hour power reserve, a broader 30 mm diameter, along with a central sweep-seconds hand. They have also been careful to preserve the exceptionally slender nature of a movement measuring a mere 3.92 mm thick! Driven by the new Elite 6150 calibre, the Elite 6150 model is distinguished by its classicism and its understated elegance. Its slim 42 mm-diameter case frames a pure, cambered dial punctuated by sleek, graceful hands. A model clearly built to last.

With the Elite 6150 model and its new Elite calibre, Zenith returns to the very roots of the traditional expertise cultivated by the House: that of an authentic watch Manufacture capable of developing prestigious complicated calibres as well as precise and reliable classic movements. To achieve this, it is bringing back to the forefront its famous Elite base calibre presented in 1994. While this three-hand Zenith movement is still considered one of the most dependable on the market, it had hitherto remained in the shadow of its illustrious relative, the legendary El Primero chronograph calibre. Such a lack of exposure was quite unjustified, since this sturdy and versatile movement has for more than 20 years been impeccably driving both ultra-thin watches and gem-set models from the Zenith range. Determined to perfect its proven qualities and to deploy its virtually unlimited potential within its collections, the Manufacture has therefore undertaken to raise the profile of the Elite calibre. In its contemporary version, the new Elite movement is enriched with enhancements meeting current demands such as a 100-hour power reserve and a more generous diameter. Thereby raised to peak capacity, the new Elite 6150 calibre is destined to be interpreted through a number of upcoming new developments and to occupy the place it deserves within the offer from the brand with the guiding star.

Elite. A name that speaks volumes in terms of the ambitions fuelling this movement developed by Zenith in 1994, the goal being to provide a robust, reliable, accurate and ultra-thin complement to its famous El Primero chronograph. The first Elite calibre already signalled Zenith’s ambition to be a full-fledged Manufacture creating its entire range of movements, from the most complex to the most ingenious. This was a rare phenomenon within the watch industry at the time, especially since very few companies even had their own base movement. Studies on this ultra-thin, adaptable movement began in 1991 and the Elite calibre was born three years later. The brand’s first development to benefit from Computer Assisted Design (CAD) technologies, the multi-purpose movement also intended for other companies was issued in several different versions right from the start. This 11-ligne calibre with its more than 50-hour power reserve was envisaged as a long-term product destined to evolve constantly over the years. The Elite calibre made a strong impact at the time of its presentation during the Basel Fair in 1994. Experts lavished fulsome praise on its many assets and noted its exceptional slimness. The trade press even awarded it the title “Best Movement of the Year”. Despite the immediate interest it sparked and a reputation that has remained on a par with its undeniable qualities, the Elite calibre has not yet earned the same degree of fame as the El Primero chronograph movement. By modernising it and notably integrating the latest technical and aesthetic developments, as well as attuning it to current requirements, the Manufacture Zenith is displaying its determination to bring the Elite movement firmly back to the forefront and to give it a starring role in its future developments.

With the aim of making the new Elite 6150 the basis of numerous future variations, the R&D team at Zenith opted to perfect its essential characteristics and to further enhance its performance. It notably addressed the task of doubling its power reserve – previously amounting to 55 hours – by adding a second barrel. The new Elite 6150 calibre now has a generous more than four-day power reserve.

Throughout the development process, the movement thickness was the main focus of attention and safeguarding the movement’s original slimness was an absolute must. This challenge has been successfully met, since its 195 assembled parts form an ensemble no more than 3.92 mm thick. Meanwhile, the diameter of the calibre has been considerably enlarged so as to match the sizes of contemporary watches and thus provide a base movement that is more flexible to accommodate a variety of functions in the future. Another notable modification is that the seconds, formerly displayed in a subdial at 9 o’clock, are now displayed by a central direct-drive seconds hand, thereby ensuring improved amplitude, precision and reliability. Thus powering central hour, minute and seconds hands, the Elite 6150 calibre beats at a frequency of 28,800 vibrations per hour.

The first timepiece to house the new Elite calibre, the Elite 6150 model features an entirely redesigned ultra-thin case of which the 42 mm diameter, a first for Zenith, will become a new benchmark size for the brand. The pure, restrained design of this case expresses the care devoted by the Manufacture to a process of constant self-renewal, driven by a will to endure and to pursue a quest for essentials. This new ultra-thin steel case redesigned in a pebble shape features slim, flowing lines accentuated by tapered, slightly sloping lugs. Water-resistant to a depth of 30 metres, the case of the Elite 6150 reveals through its transparent back the mechanism in motion and the steady dance of its oscillating weight delicately adorned with a Côtes de Genève motif. The timeless classicism of this timepiece exuding an inherent sense of elegance continues on the display side with a cambered silver-toned dial punctuated by extremely slender baton-type hands. In a striking trompe-l’oeil effect, the long, slender hour-markers hollowed out to form delicate grooves create a distinct sense of depth. These subtle refined touches are matched by a rubber-lined alligator strap fitted with a comfortable triple-blade folding clasp.

A NEW ERA FOR ZENITH CALIBRES

In unveiling this new Elite 6150 calibre, Zenith reaffirms the brand’s determination to honour its status as a Manufacture and heralds the renewal of its range of “in-house” movements. This contemporary evolution of a sturdy and accurate historical calibre embodies a solid and lasting foundation for future variations and developments.