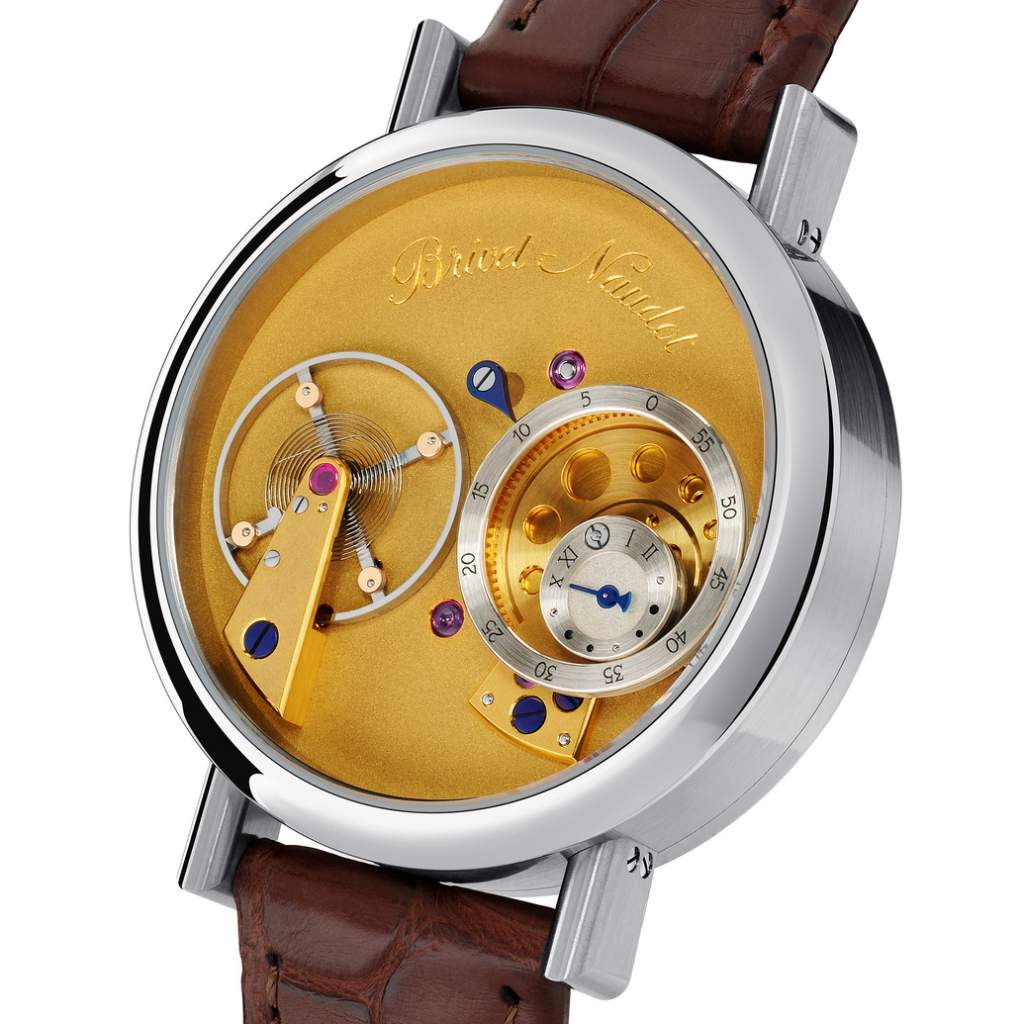 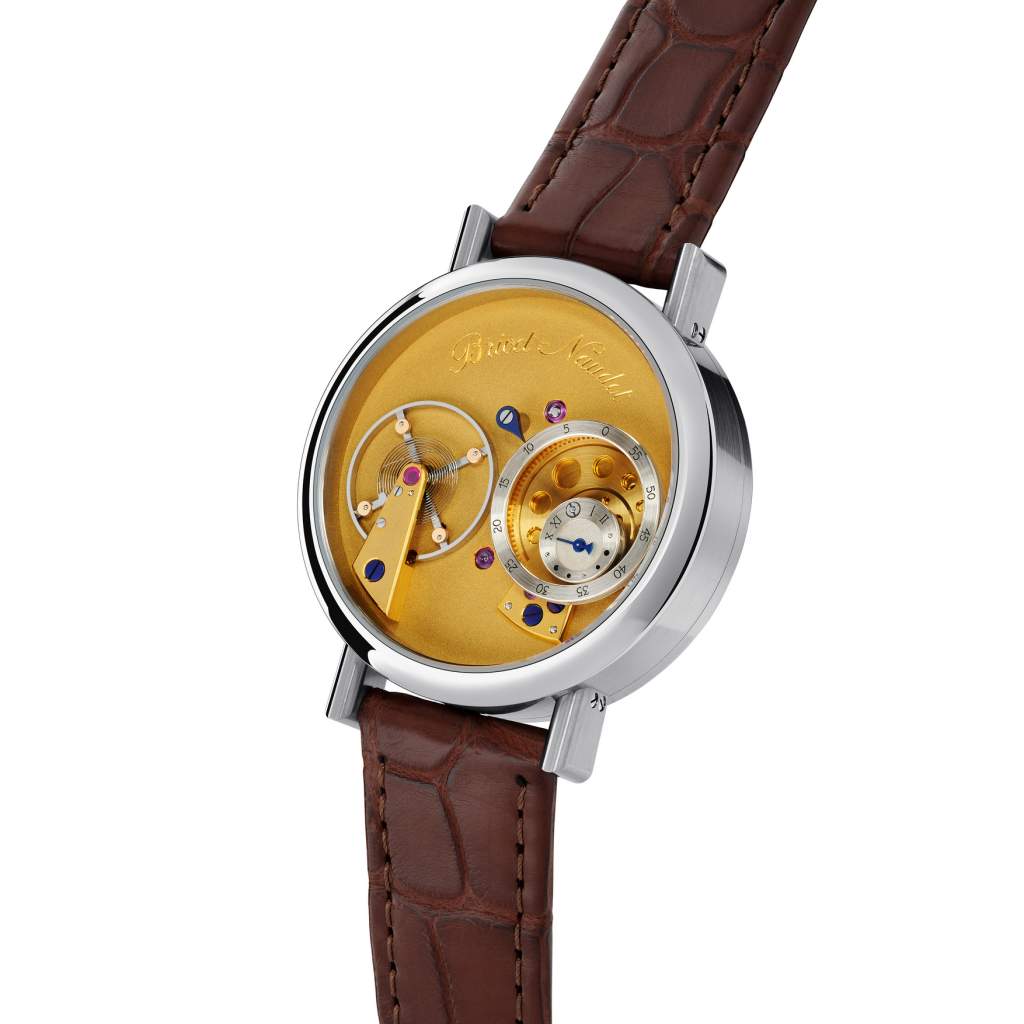 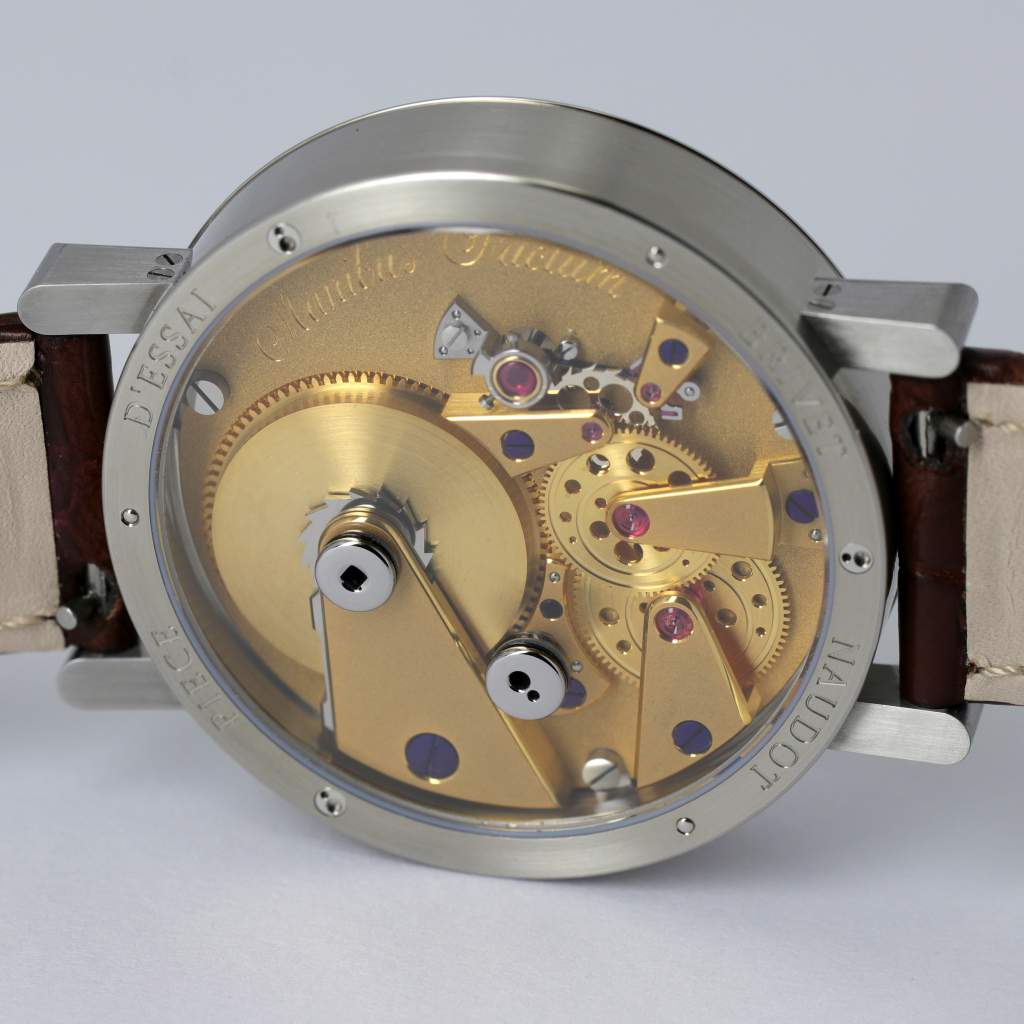 The Eccentricity is a watch designed and manufactured in the spirit of 18th and 19th century precision timepieces.

Started from a blank sheet of paper, without recovery or compromise, the entire architecture of the movement and the watch was built around the quest for harmony and technical excellence, regardless the difficulties generated by these choices.

Entirely designed and produced by the watchmaker himself, without the use of CNC machines or subcontracting, each pinion, each bridge including the escapement or the case are the result of a long and meticulous work. Believing that the time spent at the bench hand working gives an extra soul to the watch, Cyril Brivet-Naudot spent several years in his workshop turning, filing, adjusting and decorating all the components of the watch one by one. 'Eccentricity, thus reviving a bygone era when the watchmaker had to master all the skills required to produce a precision timepiece.

Winded using a key, a nod to its ancestors, the Eccentricity has no crown, it case keeps pocket watches’ beautiful symmetry.

The eccentric free escapement, or the quest of precision.

The escapement used in the Eccentricity gave it its name: the free eccentric escapement. Invented by Louis Richard in the 19th century and modernized, this key element of watch precision combines all the advantages of precision escapements with the security required of modern wristwatches.

Giving a direct impulse to the balance via the work-hardened white gold escapement wheel, the performance is superior to the classic Swiss lever escapement while requiring no lubrication, ensuring consistent precision over the months and years. Equipped with a 25 micron thick spring and an eccentric small plate, no shock can disturb the operation of the escapement during the oscillations of the balance, and the release is done with minimal friction.

Coupled with a regulator with an Elinvar hairspring with a Phillips terminal curve, and powered by a thin, long barrel spring for the most constant force possible, the Eccentricity is inherently a watch designed to be highly precise.

Assembly of 19 components, each requiring a precision of a few microns, this escapement has deliberately not been patented in order to allow every watchmaker who wants so to benefit from its advantages by integrating it into his own creations.

Eccentricity, the past revisited

While Eccentricity follows the quest of precision from the golden age of watchmaking, it embraces the era that created it: time can be read everywhere with a precision that cannot be compared to mechanical timepieces. Hence the choice not to display the seconds, and to replace the rapid movement of the small hand with the grandiose oscillation of the balance, a symbol of precision, placed on the dial side to admire its movement. Precision is no longer displayed conspicuously but is discreetly appreciated by its owner who sees it over the long term.
In a resolutely traditional style (grained and gilded brass, blued screws, black polished steel, silver dials), the Eccentricity remains however of its time by leaving the entire mechanism visible and being housed in a wristwatch.

The latest original display is a rotating minute dial and a satellite hour dial.

A watch made entirely by hand, the Eccentricity synthesizes a concentration of precision in a modern design, humble but vibrant tribute to precision timepieces of the past.