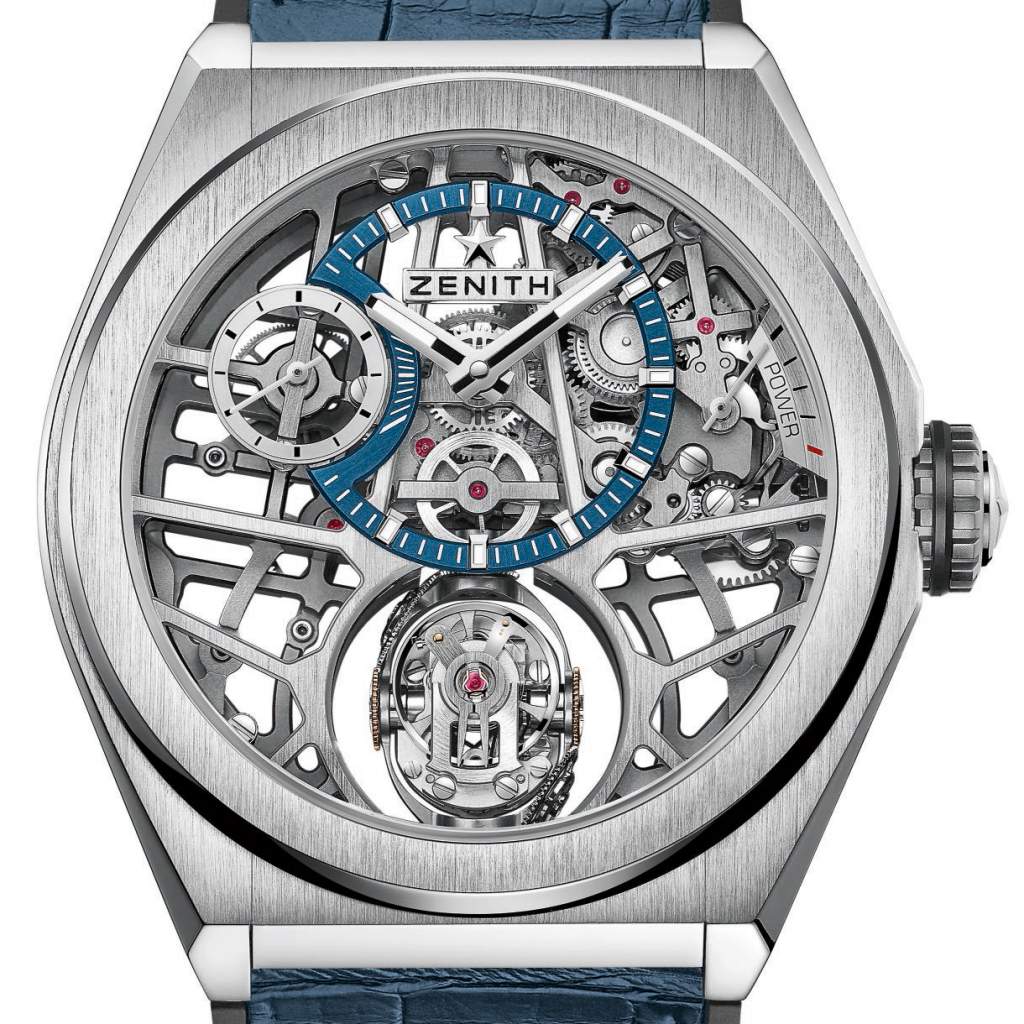 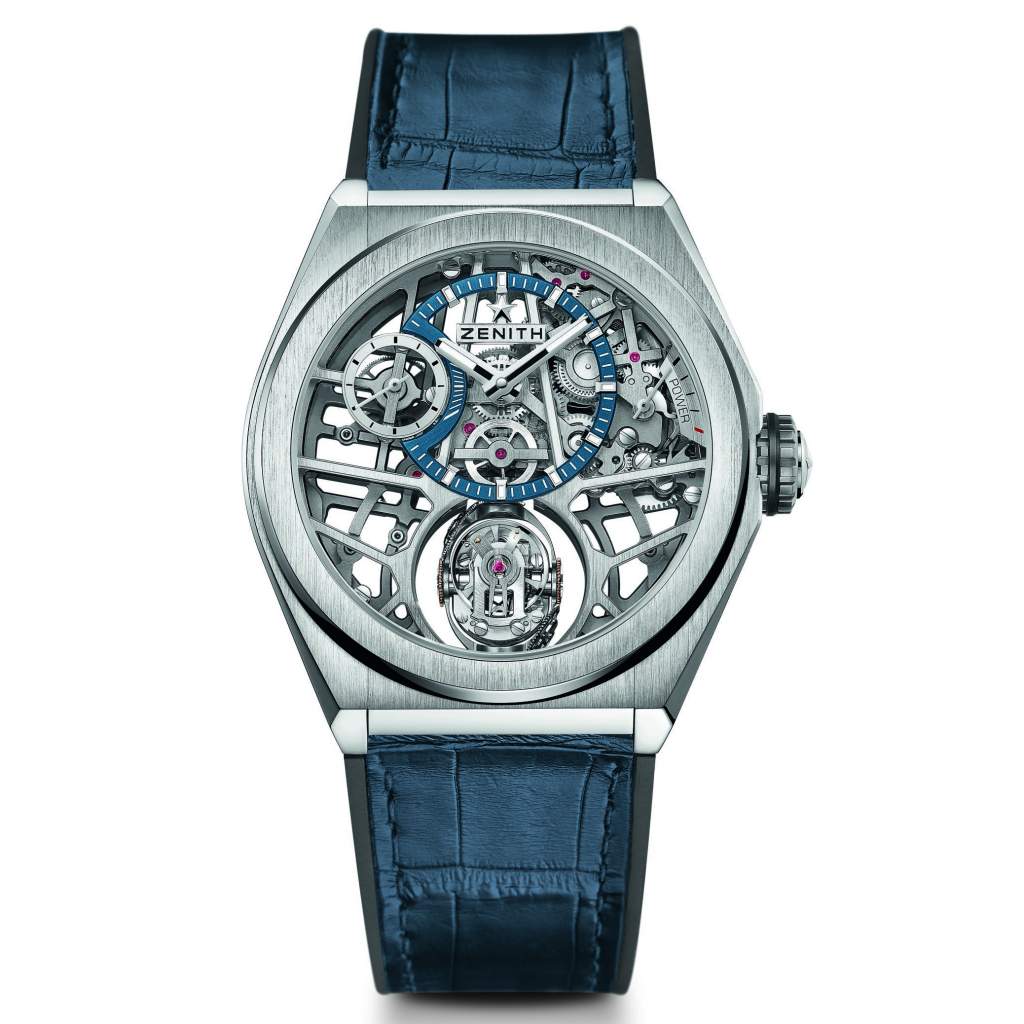 In 2017, Zenith blazed the trail towards watchmaking’s future with the revolutionary Defy El Primero 21, the only high-frequency automatic chronograph designed to measure hundredths of a second. This year, DEFY appears as a full-fledged collection featuring several degrees of mechanical complexity ranging from three-hand to Grand Complication models.

The first embodiment of futuristic Haute Horlogerie, the new Defy Zero G defies the laws of gravity with its downsized and optimised gyroscopic “Gravity Control” module. Zenith’s famous patented device stages a spectacular show at the heart of a skeletonised and grey-toned high-frequency El Primero calibre. Fitted with a sturdy 44mm-diameter case in titanium or pink gold, the Defy Zero G teams its stellar architecture with a supple and ergonomic metal bracelet.

A year ago, Zenith wrote the first chapter of tomorrow’s watchmaking with the launch of Defy El Primero 21, an exceptional hundredth-of-a-second chronograph, along with the first-generation Defy Lab, the world’s most accurate mechanical watch with an unprecedented oscillator. Propelled by these champions of performance and precision, DEFY is now a complete and modern collection comprising various levels of complexity. Defying the laws of gravity, the new Defy Zero G (for Gravity) heralds this Haute Horlogerie of the future, with a cleverly downsized and fine-tuned “Gravity Control” gyroscopic module.

In the early 21st century, as part of its quest for ultimate precision, Zenith devised a revolutionary self-regulating gravity control device. This patented “Gravity Control” gyroscopic module cancels the effects of gravity on the running rate of the watch, by maintaining the regulating organ and the balance wheel in a horizontal position. In an additional feat, it was fitted in the high oscillation-frequency El Primero movement measuring tenths of a second.

Reinterpreted in futuristic mode for the new Defy Zero G, this spherical system composed of 139 tiny components has been entirely redesigned and optimised so as to increase its efficiency and reduce its dimensions. The gyroscopic module – inspired by historical marine chronometers – which previously spun between two convex sapphire crystals, now occupies only 30% of its initial volume and can thus fit perfectly between the two flat sapphire crystals of the DEFY case. This technical, feather-light device appears in all its majesty at 6 o’clock.

As a double guarantee of extreme precision, the heart of the new Defy Zero G beats to the fierce pace of the manual-winding El Primero 8812S calibre, oscillating at 5 Hz and self-regulated by the modernised “Gravity Control” module. With its 324 components (including 139 for the gyroscopic carriage alone), this high-frequency in-house movement – heir to the legendary 1969 El Primero – drives the offset hours and minutes, small seconds and gravity control functions, along with the over 50-hour power-reserve indication.

This new DEFY Grand Complication model exudes a modern, stylised design. Visible on both sides, the entirely skeletonised and black rhodium-treated movement makes a striking contrast with the light tone of the five slim branches evoking the offset Zenith star symbol. They match the case material and accentuate the 3D effect of this dynamic architecture. The smaller gyroscopic module spins majestically at 6 o’clock, while offset hours and minutes appear on a blue-tinted ring featuring luminescent faceted-hour-markers and baton-type hands.

The symmetrically arranged openworked small seconds subdial and power-reserve counter – respectively appearing between 9 and 10 o’clock and between 2 and 3 o’clock – are swept over by slim hands. Forged from pink gold or titanium, the 44mm-diameter case water-resistant to 100 metres is held firmly to men’s wrists by a new integrated bracelet in the same metal with brushed and polished H-shaped links, or a rubber strap coated with alligator leather.