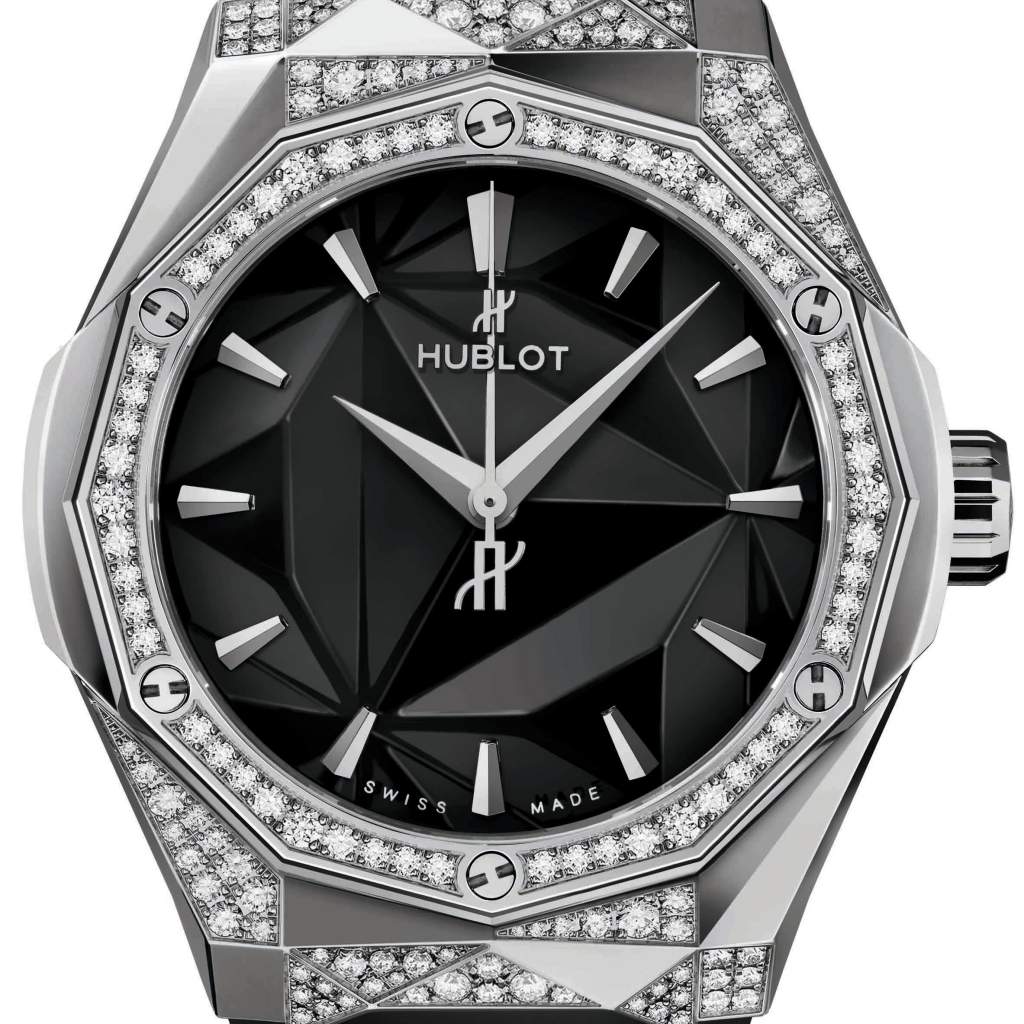 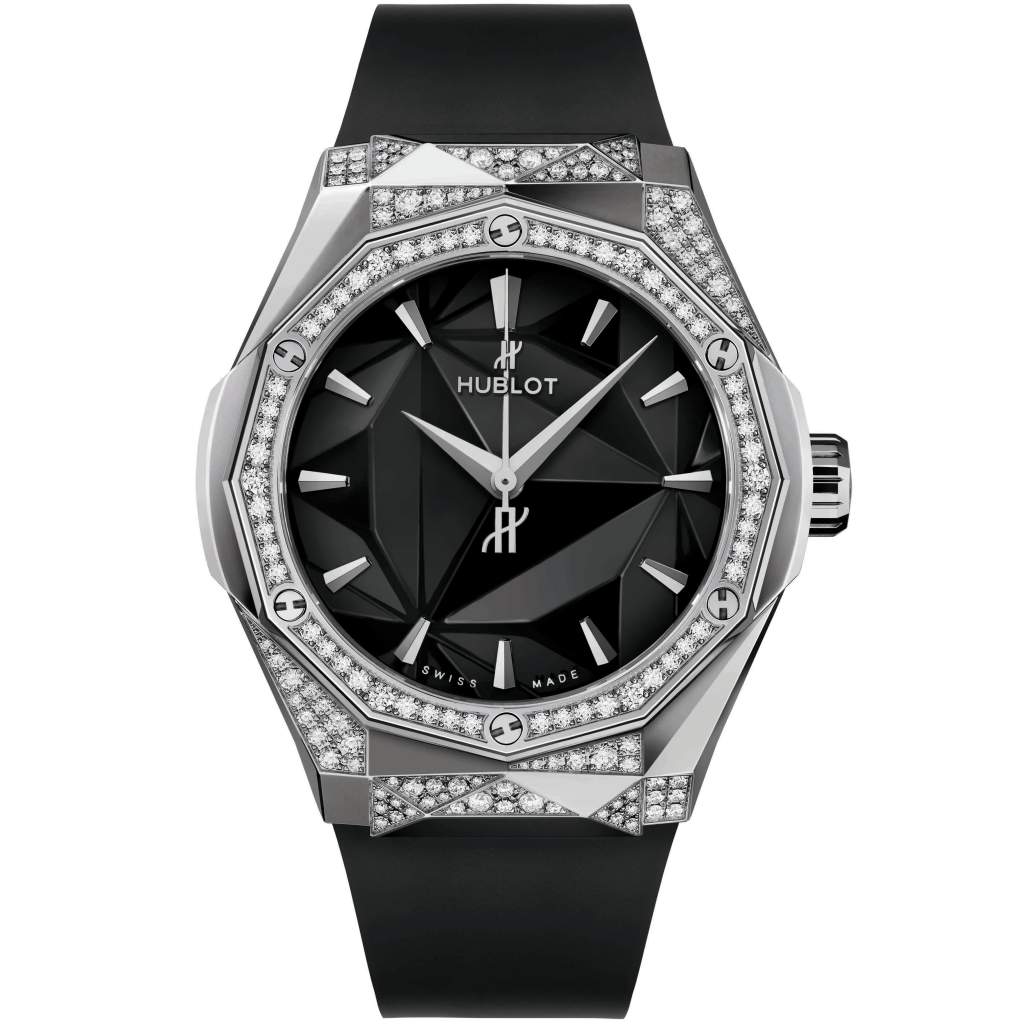 Playing with light and shade, the latest Classic Fusion Orlinski series is sculpted in the aesthetic signature of artist Richard Orlinski, including its faceted dial. Designed for those who prefer the very finest watches, the 40mm case is available in titanium or King Gold, transforming the piece into a jeweller's objet d'art set with brilliant-cut diamonds.

No fewer than six Classic Fusion Orlinski watches have been created as a continuation of the artistic and technological alliance between Richard Orlinski and Hublot, following on from the Aerofusion Chronograph and Tourbillon. At the sculptor's behest, this series has been designed and developed on a smaller scale to satisfy a new clientele. Symbolising the characteristic folds in his often monumental works, edges, bevels and facets have been miniaturised with horological precision to create mirror effects on the dial. The understated strap in matt black rubber creates an arresting contrast, all the more pronounced on four of the six models whose diamond-set cases create a jewellery effect.

What better than the stone with the highest refractive index to reflect the mirror-polished finish typical of the plastic artist's work? On four of the timepieces, the bezel – a dodecagon which has characterised the creative partnership since 2017 – is set with 54 diamonds and sits on a case which is either fully set with 210 diamonds or partially set with 112 diamonds. Free from precious stones, the other two watches exude a more subtle light, with the accent on the pure lines, the graduated light and shade of the materials, and the sharp-angled forms characteristic of Richard Orlinski's sculptures.

A lover of all kinds of art and a vocal advocate of its accessibility to all, Richard Orlinski creates intelligible works and installs them in open-sky settings (Courchevel, Deauville, etc.). Orlinski works to decompartmentalise the modes of artistic expression and challenge convention. As the creative force behind these six Classic Fusion Orlinski watches, here he addresses new audiences, women and lovers of timeless stones or sculpture. The Aerofusion Chronograph and Tourbillon attest to the harmonious relationship between watchmaking and art, conveying a subtle message. It makes as much sense to wear art on the wrist as jewellery.

Founded in Switzerland in 1980, HUBLOT is defined by its innovation, which began with the highly original combination of gold and rubber. This "Art of Fusion" stems from the imagination of its visionary Chairman, Jean-Claude Biver, and has been driven forward by CEO Ricardo Guadalupe since 2012.

The release of the iconic, multi-award-winning Big Bang in 2005 paved the way for new flagship collections (Classic Fusion, Spirit of Big Bang), with complications ranging from the simple to the highly sophisticated, establishing the extraordinary DNA of the Swiss watchmaking house and ensuring its impressive growth.

Keen to preserve its traditional and cutting-edge expertise, and guided by its philosophy to "Be First, Different and Unique", the Swiss watchmaker is consistently ahead of the curve, through its innovations in materials (scratch-resistant Magic Gold, ceramics in vibrant colours, sapphire), and the creation of Manufacture movements (Unico, Meca-10, Tourbillon).

HUBLOT is fully committed to creating a Haute Horlogerie brand with a visionary future: a future which is fused with the key events of our times (FIFA World CupTM, UEFA Champions LeagueTM, UEFA EUROTM and Ferrari) and the finest ambassadors our era has to offer (Kylian Mbappé, Usain Bolt, Pelé).

Chances are you will have seen his brightly coloured Pop Art-style multifaceted beasts somewhere before. From his immense "Wild Kong" gorilla sculpture on the Croisette in Cannes and his crocodiles in the sunshine of the Miami Design District, to his 5-metre-tall bear on the snowy pistes of Courchevel, Richard Orlinski's unique works are unmissable. It was in 2004 that Richard Orlinski decided to dedicate himself full time to art. Steeped in pop culture, the artist created a colourful universe inspired by the wildest animals and iconic objects which are central to their time. Driven by a desire to democratise art by making it accessible to the many, Richard Orlinski is a passionate creator who has had to overcome many obstacles, constantly pushing his limits and reinventing himself.

His desire to popularise art also translates into a need to provoke an immediate emotional response, from old and young alike. Far from the diktats of the contemporary art scene, this artist's works speak for him! A lover of art in all its forms, the sculptor shatters received ideas and never hesitates to blend different forms of artistic expression. Motivated by a global, universal vision, he loves to explore different domains: sculpture, design, music, live performance... Represented by more than 90 galleries in France and abroad, Richard Orlinski has been the bestselling French artist in the world since 2015 (Source: Art Price).