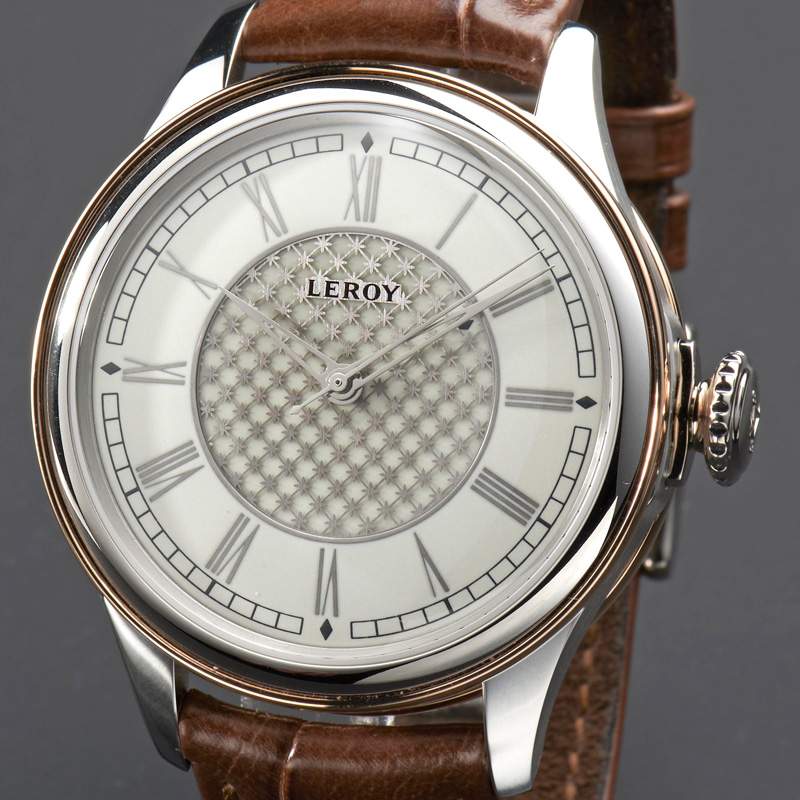 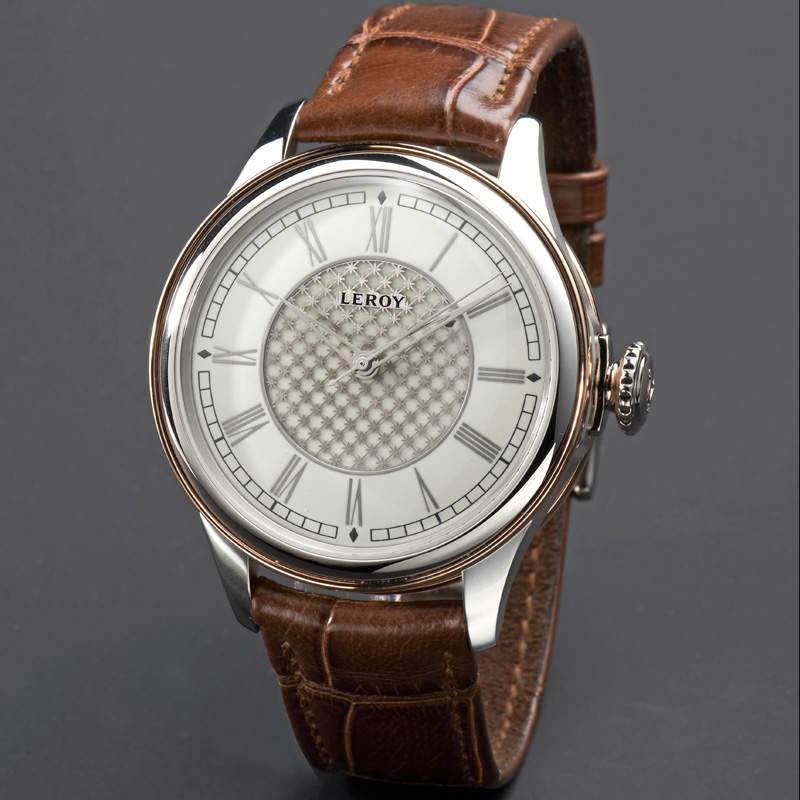 THE CHRONOMÈTRE À TOURBILLON FROM THE OSMIOR COLLECTION.

With its Chronomètre à Tourbillon, Leroy is renewing ties with its rich past in the field of chronometry.

It is notably paying tribute to the work of a father and son who were both watchmakers to King Louis XV: Julien (1689-1759) and Pierre Le Roy (1717-1784). Acknowledged as the father of modern chronometry, the latter invented the detached escapement and won a double prize from the French Royal Academy of Science for his work on marine chronometry.

Heir to an exceptional historical heritage dating back more than 300 years, the modern-day Leroy brand has set itself the challenge of reviving the fundamental codes of the spirit that inspired Leroy since its founding (1713) through its contemporary reinterpretations.

The Chronomètre à Tourbillon is a masterpiece joining the new OSMIOR collection designed as a tribute to the wealth of the Leroy chronometric heritage.

Beneath its extremely pure appearances, respectful of the codes and traditions of fine French horology, lies an ingenious and innovative mechanism. The historical references and the movements used in chronometry competitions – competitive arenas for watchmakers until the 1970s – naturally determined the choice of the tourbillon.

This heritage lives on, since the victory earned in the 2013 International Timing Competition in the Tourbillon category was added to the 384 gold medals already won by Leroy.

Hand-wound Manufacture Calibre L100, entirely developed and built in the Manufacture in Le Sentier at the heart of the Vallée de Joux, has an escapement with direct impulse on the balance also featuring an impulse wheel and a winding wheel for constant force, as well as a balance-spring with two terminal curves. The movement is housed within an elegant 41 mm-diameter round case in gold (5N red gold, palladium-coated white gold or two-tone) framing a magnificent Grand Feu enamel dial, inspired by 19th century Leroy pocket watches.

Distinctive features of the Leroy 100 calibre

This unprecedented calibre is an authentic horological mechanical masterpiece with its 953 parts, almost as many as the iconic historical Leroy 01.

The movement architecture and its pillar-based construction are inspired by the first 18th century marine chronometers. The barrel-bar is enhanced by a now extinct traditional technique involving hand brushing with silver powder to create a grained texture.

The time-setting mechanism, a nod to 18th century French clockmaking, is adorned using the Geneva mast” decorative technique, while the finesse and geometry of the going train are also inspired by the same era.

The calibre comprises an original direct-impulse escapement (one direct impulse and one indirect impulse per oscillation) recalling the “Duplex” escapement developed by Pierre Le Roy and protected by a patent registered for its ingenious self-compensating mechanism for thermal variations. The balance is thus equipped with a system serving to compensate for the undesirable effects (such as disturbances to rating precision) caused by the dilatation of the balance-spring, at temperatures extending beyond those normally controlled within a horological mechanism.

The use of diamond impulse-pallets also stems from a determination to limit friction and thereby increase the efficiency of energy transmission, as well as reducing wear.

The balance with four adjustment screws is equipped with a balance-spring produced by Manufacture de Spiraux et Echappemments (MSE) which, like Leroy itself, belongs to the Festina group. This balance-spring is distinguished a double terminal curve such as described in watchmaking theory but never previously used in series-made models and now assembled in the Leroy workshops. There are two curves – an inner curve and an outer curve – that foster isochronism while ensuring perfectly concentric deployment in a vertical position. These two curves also eliminate any potential “unbalance” effect, the disequilibrium referred to in watchmaking literature as the “Grossmann effect” (named after Jules Grossmann, 1829-1907). They also serve to neutralise the so-called “Caspari effect” (named after the head of the chronometry department of the French Royal Navy in 1900). The latter’s research was itself based on the discoveries made by Pierre Le Roy, whose empirical observations showed him that that there is in every spring a certain length that endows it with perfect isochronism, a principle he was able to apply to balance-springs.

The calibre oscillates at 18,000 vph (2.5 Hz) with a large-size balance that promotes long-term precision rating.

An integral part of the escapement, the constant-force device serves to ensure stable amplitude throughout the duration of the power reserve.

Also based on the idea of maintaining the most stable possible deployment of energy over the entire power reserve, the fusee-chain device guarantees exemplary linearity of the torque in order to supply the energy required to rewind the constant-force escapement. The chain itself is a marvel of miniaturisation and precision comprising 105 links measuring 1.55 cm each and forming a total length of 16.275 cm!

The aesthetic of the tourbillon carriage harks back to the 18th century, as does the gear train. Its bridge is mirror-polished.

In tribute to Pierre Le Roy, the first watchmaker to have produced a deck chronometer for maritime navigation, Leroy has selected a deadbeat seconds mechanism enabling the seconds hand to literally pause for a second to mark this unit of time. Inspired by the same idea as that featured on the Duplex escapement with its double escape-wheel, two superimposed but connected levers serve to deconstruct the seconds jump into two phases.