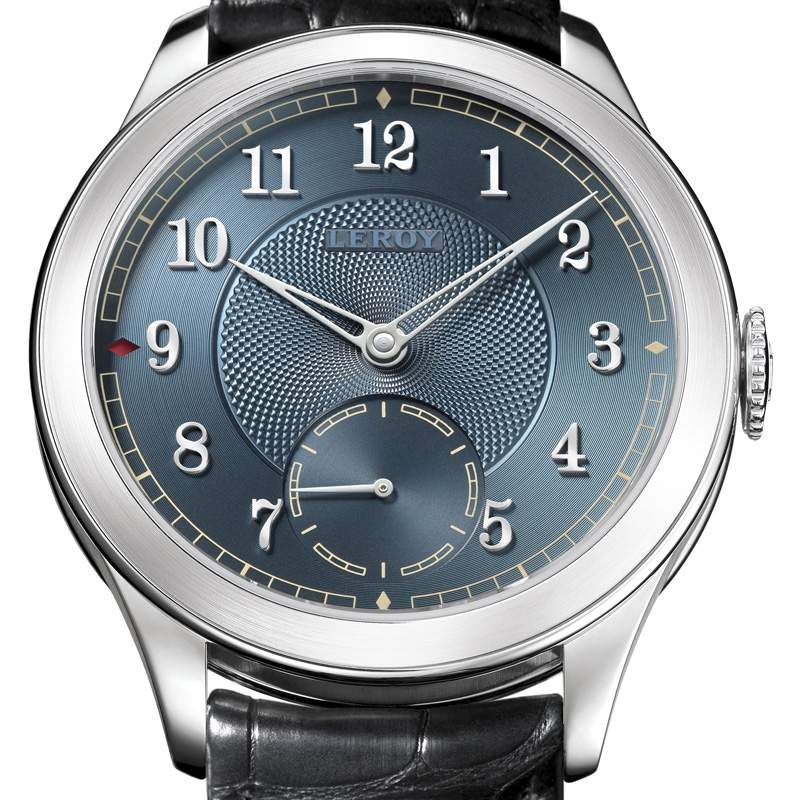 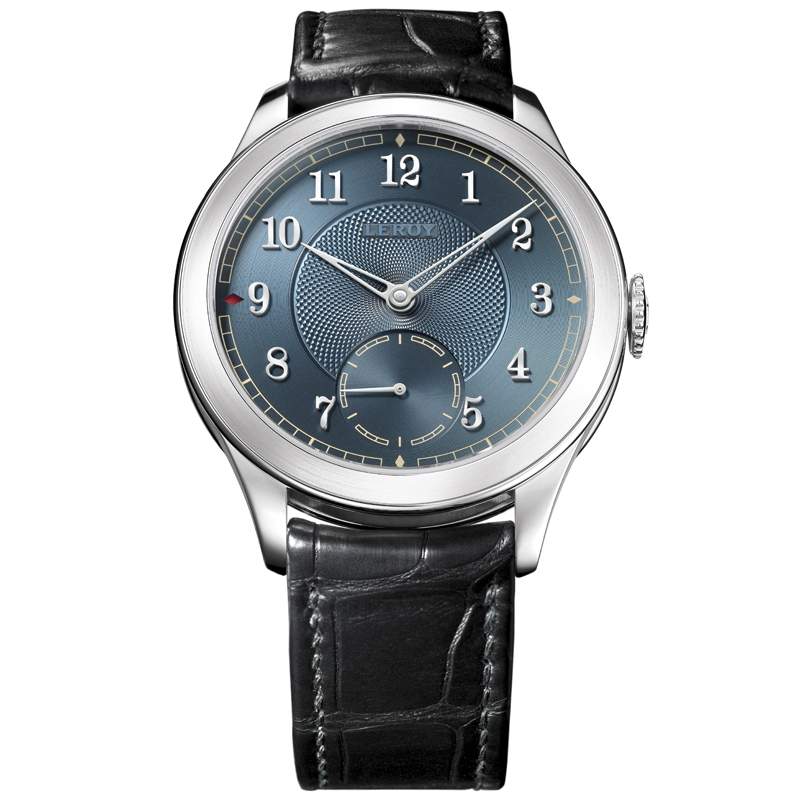 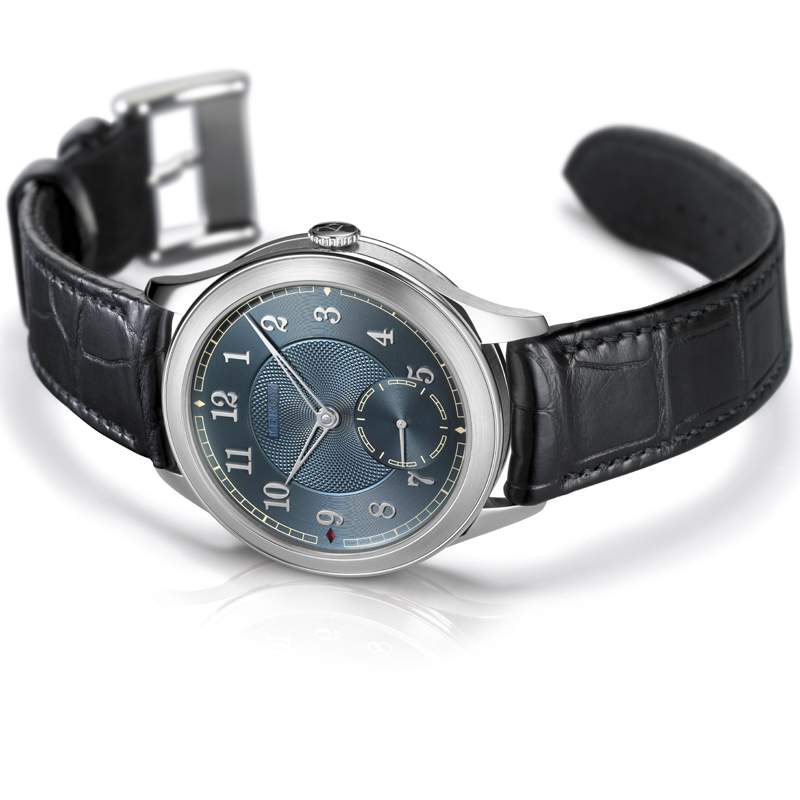 THE CHRONOMETRE OBSERVATOIRE FROM THE OSMIOR COLLECTION

Leroy is renewing ties with traditional Haute Horlogerie through its Chronomètre Observatoire.

This authentic timepiece is a reference to the inventions of the 18th century master-watchmakers and features the fundamental principles of horological science, inspired by the work of Pierre Le Roy (1717 – 1785),  “the father of modern chronometry”

Heir to an exceptional historical heritage spanning more than 300 years, Leroy has set itself the challenge of reviving through various contemporary reinterpretations the fundamental codes of the spirit that has inspired it since its founding in 1713.

The Chronomètre Observatoire bears vibrant testimony to this approach and will thrill collectors with a penchant for the outstanding signatures that have made their mark on horological history, as well as delighting connoisseurs with a keen interest in traditional techniques. Beneath its intrinsic elegance, the Chronomètre Observatoire is a compendium of the longstanding Leroy expertise. Loyal to the brand values, it focuses on pared-down essentials while providing optimal readability and impeccable chronometric precision.

This timepiece is equipped with the new-generation hand-wound L200 movement entirely developed and built in our Manufacture in Le Sentier (Switzerland) and equipped with an escapement with direct impulse on the balance, balance-spring with double terminal curve and parallel-mounted twin barrels. The movement is housed within an elegant round gold case (5N red gold, white gold or two-tone 950 palladium and 5N red gold) with a 38 or 40 mm diameter, framing a refined solid silver dial adorned with hand-guilloché “barleycorn” motifs inspired by 19th century Leroya pocket watches.

The applied Arabic numerals are made of gold and delicately cabochonné, meaning each is hand-polished and domed. The steel hands based on an exclusive Leroy design are openworked and the 98-hour power reserve is visible through a lozenge-shaped aperture at 9 o’clock that is deliberately subtle in order not to disturb the perfect aesthetic balance between the various dial elements.

The development of this new three-hand L200 chronometer movement pays tribute to Haute Horlogerie in a manner entirely in tune with the history of Leroy, while also backed by new technologies aimed at achieving optimal precision.

This original calibre, featuring an escapement with direct impulse on the balance (1 impulse/1 oscillation) that transmits constant energy to the regulating organ and ensures its excellent rating precision, stems from the imagination and research of our master-watchmaker Karsten Frässdorf.

The balance with its 4 adjustment screws is equipped with a balance-spring produced by a company belonging to the Festina Group (MSE) and comprising an unusual double terminal curve. The combination of inward and outwards curves is conducive to isochronism by enabling perfectly concentric deployment in a vertical position and eliminating any potential imbalances described in watchmaking literature as the “Grossmann effect”.

It also serves to neutralise the “Caspari effect” based on the discoveries made by Pierre Le Roy whose empirical approach showed that there is for every balance spring a certain length that endows it with perfect isochronism. By using the “Brun Cage” (an invention by the watchmaker M.J. Brun in around 1900), the position of the balance-spring stud may be varied by 360 degrees, thus enabling the setter or timer to choose the best pinning point and also to determine the outer terminal curve.

The calibre oscillates at a rate of 18,000 vph (2.5 Hz) and features parallel-mounted twin barrels and 42 jewels including four synthetic diamond jewels.

The Chronomètre Observatoire model provides a central display of the hours and minutes via cut-out “Corteault” shaped steel hands and also features the stop-seconds function.

A small subdial at 6 o’clock shows the passing of the seconds by means of a “duplex” jump (thus named in tribute to Pierre Le Roy and his Duplex escapement) consisting in a short jump followed by a longer one. A lozenge-shaped aperture at 9 o’clock reveals the disc providing the 98-hour power-reserve indication (IRM). From 0 to 60 hours, the disc remains the same colour as the dial, while from 60 to 80 hours, it switches to white; and beyond 80 hours appears in red to signal that the autonomy is nearly depleted: a highly appreciable, useful and extremely discreet function entirely in tune with the dial.

An incomparable style matched by hand-crafted decorations and finishes

The design also scrupulously respects the signature characteristics of the works of art created by Leroy in previous centuries, while also corresponding to current tastes and trends.

It is composed of three parts: a satin-brushed bezel, a circular saint-brushed case middle and polished gadroons. The glareproofed sapphire crystal case-back enables the collector to admire the beauty of the calibre with its entirely hand-crafted finishes.

The dials come in a choice of five colours: opaline silver-toned, Leroy blue, Leroy champagne, rosé champagne and slate grey. The hour-markers match the colour of the gold case, while the blue, rhodiumed or “black gold” hands may be selected according to the customer’s personal preferences.

The movement wheels are produced and adorned in keeping with the highest quality standards. Also demonstrating complete respect for the ground rules that make an object truly high-end, the pinion leaves are polished using a wooden grinding wheel and the ratchet-wheels finished using the ”Mât de Genève” (Geneva Mast) process, an ancient decorative technique that give them an anthracite colour, while the other steel parts as well as the winding mechanism are specular polished (also known as black or mirror polishing). The bridges are bevelled and frosted to create a bronze-tone colour. All the screws are blued from the outset to avoid oxidation, while the screw heads are specular-polished and even the profiles of the collets are also polished.

The timepiece is tamed with a hand-sewn alcantara-lined alligator leather strap secured by a pin buckle or folding clasp.

Each Chronomètre Observatoire watch is individually numbered and delivered with it own chronometer rating certificate issued by Besançon Observatory. The latter tests the entire watch ‘head’ (meaning a fully cased up model not yet fitted with its strap/bracelet) in a comprehensive manner involving 15 consecutive days of testing in every position, and each mainplate is hallmarked with the famous “Viper’s Head”.

The Leroy Chronomètre Observatoire is synonymous with precision, superior quality, a token of prestigious and constantly advancing horological expertise. This timeless instrument is destined to become an inescapable benchmark among classic models.