The Chambers of Wonders - The New World 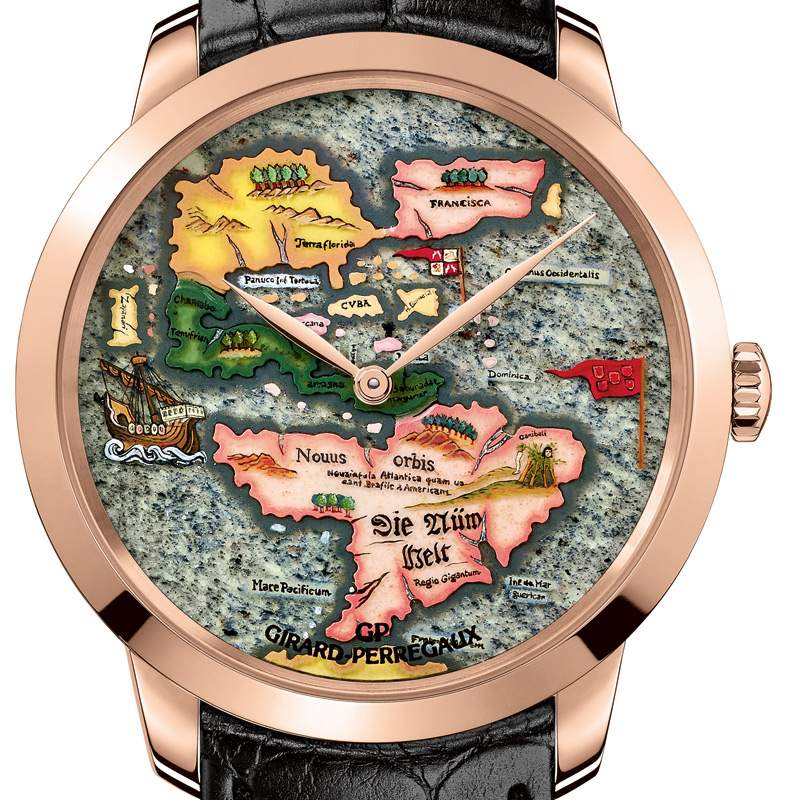 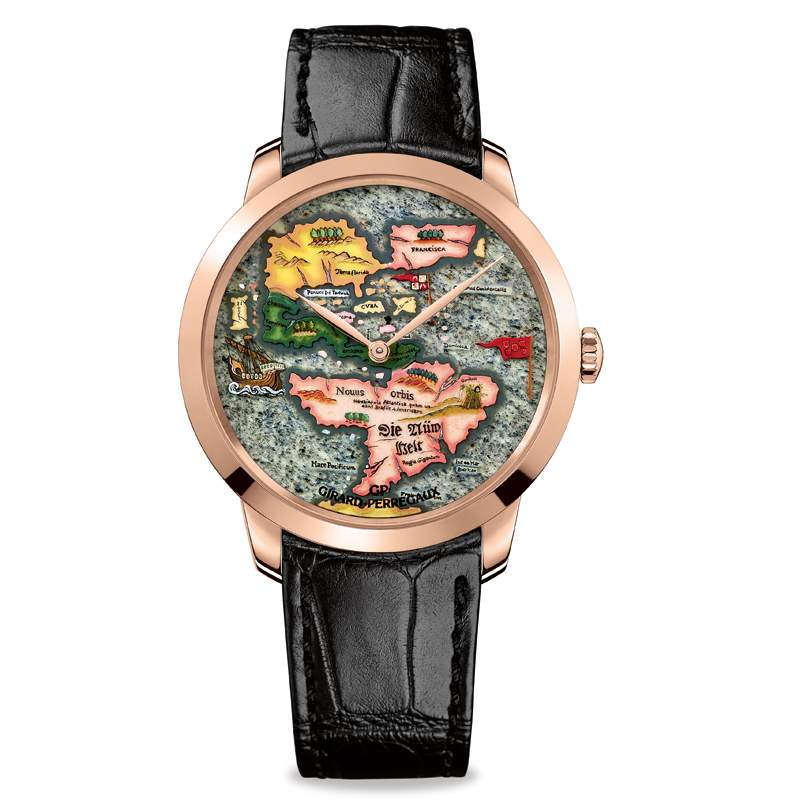 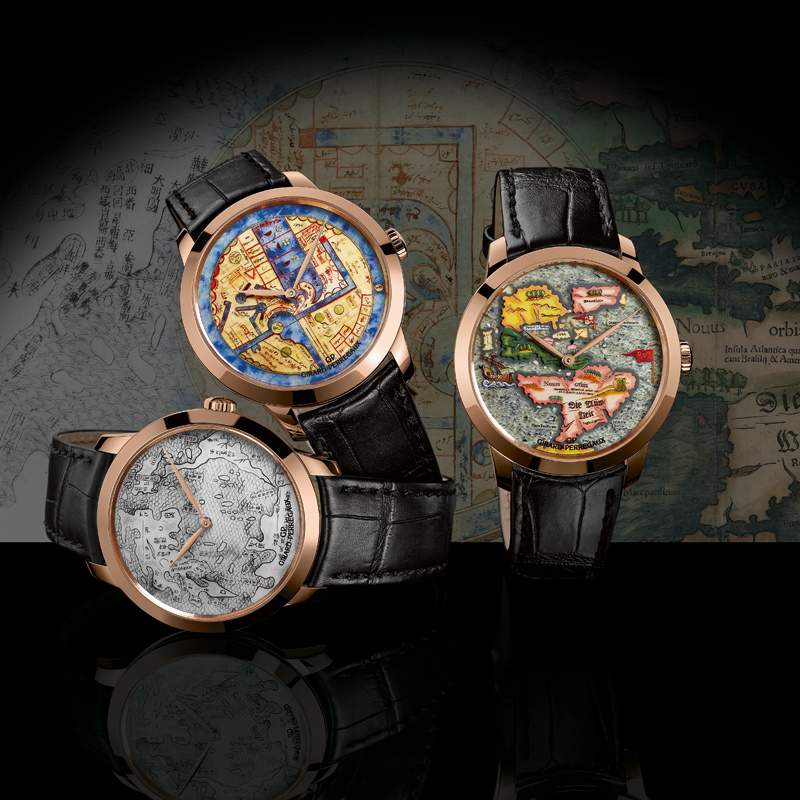 The Chamber of Wonders

Girard-Perregaux renews and transcends the tradition of the famous Cabinets of Curiosities, the forerunners to museums which emerged in Renaissance Europe in the Chamber of Wonders collection. Through the honorary name, Chamber of Wonders, the Brand opens a doorway into a place brimming over with amazing treasures: discoveries, secrets, fabulous stories, natural assortments and curiosities of all forms...

Thanks to the talents of artisans of miniatures, who craft fine detail over a background of extraordinary materials, this Chambers of Wonders collection offers three meticulously immortalized cartographic parentheses of time in the limited space of a watch dial.

Visions of the world through the ages

As brief illustrations of the history of geographical knowledge, maps of the past are, for the civilizations that produced them, both imaginative references and incomplete scientific conceptions. In their way of approaching spaces and borders, they are a testament to their authors' certainties of their position at the center of the world.

In a quest for knowledge that inspired poets, writers, scientists and explorers, the designers of these maps often relegated their territorial neighbors to peripheries populated by mythical creatures. Frontiers, rivers and geographic dimensions were the result of a multidisciplinary science where everything still remained to be discovered. It was an era where scientific observations were strongly influenced by the collective unconscious. They are all the more endearing and surprising that the maps created still conveyed the dimension of a spatial relativity to the time factor.

The Master of Maps Collection

Three watches, three eras, three worlds interpreted with exceptional expertise; The Pearl of Wonders, the Terrestrial Map, and The New World. Renaissance images are immortalized by Girard-Perregaux on three dials, in numbered pieces within a trio of pink gold Girard-Perregaux 1966 watches fitted with an automatic manufacture caliber, all delivering different perspectives and emotions. Born in the workshops of the Manufacture, the GP03300 caliber highlights Girard-Perregaux' tradition of watchmaking and guarantees reliability and precision. Its mainplate and its bridges are carefully drawn, chamfered, and circular-grained and decorated with Côtes de Genève. Composed of 205 parts, it offers a 46-hour power reserve at a frequency of 28,800 vibrations per hour. Its 25.60 mm diameter (11 ½ lines) for a thickness of 4.20 mm is perfectly suited to the refined lines of an elegant pink gold case, developed and made in the workshops of the Manufacture. A model of harmony sporting the remarkable detail of a gently sloping and polished bezel to highlight its thinness.

The Pearl of Wonders

Circular like the circumference of a classic watch, the map drawn during the first half of the fifteenth century by historian Ibn al-Wardi is, in itself, a concentrated moment of history. Firstly it is inspired by the theories of Ptolemy, the Greco-Egyptian astronomer and astrologist who lived in Alexandria at the beginning of the 2nd century AD and who is considered to be the father of geography. This atlas of the world demonstrates, at the turning point between the Middle Ages and the Renaissance, the influence of Arab culture on other civilizations. Arab astronomy was very advanced in the Middle Ages, as they described the constellations, created maps of the sky and perfected instruments such as the astrolabe.

Centered on the Arabian peninsula, the hub of the sacred pilgrimages, the unlikely lines of this mythical map allow us to recognize Africa hosting the mountains where the Nile takes its source. The river, represented by a wide blue line, suddenly flows into the Mediterranean at an abrupt right angle. In the center, surrounded by the Red Sea and the Persian Gulf surmounted by the Indian ocean, the Arabian Peninsula occupies a semicircle. Other noticeable elements are the Persian Gulf, the Indian Ocean and, in the distance, India, Sindh and China.

To render such a monument of ancient history, what could be more appropriate than the sodalite stone with its isometric structure, composed of silica-poor minerals? Its characteristic blue color and its open crystalline structure are incentives to plumb the depths of knowledge further.

This sodalite stone, known for its hardness, comes from a block from which a disk 0.70 mm high is cut and polished manually. It is meticulously carved and engraved by hand. It takes almost 4 hours of scalpel work for it to house the fragmented mosaic of a papyrus, 0.25 mm thick. Once locked between two steel plates, to ensure that its surface is perfectly flat, the parchment, like an unexpected territory of expression, can accommodate the talent of a miniature painter who, for 28 hours, reproduced the contours of the ancient map. Then a coat of lacquer covers the work of art with a thin protective and stabilizing veil. Approximately 50 hours of patience are needed before it is possible to admire The Pearls of Wonders.

Constrained within a circle, the old Chinese map selected by Girard-Perregaux is inspired by the work of Italian Jesuit, Matteo Ricci. A theologian, philosopher, mathematician, cosmologist and astronomer, this priest took part in his congregation's missions in Asia. Landing in Macao in 1582, he spent the rest of his life in China, sharing his knowledge with scholars and officials at the point of becoming one of the first Westerners allowed within the walls of the Forbidden City. Under the Ming dynasty, he translated the state of global geographical knowledge for his hosts by repositioning China as the starting point.

A true ode to the conquest of new territories, this globe already mapped out the five continents. Admittedly, Libya summed up Africa and the Austral Earth assumed the presence of Australia. Nevertheless, the four oceans were featured. Other sophisticated indications, cleverly written in Chinese, show incredible geographical and astronomical precision: the Nile River is the largest river in the world, the Earth is round, variations in length of day and night are listed and explained, the distances between the Earth and some planets are also listed there in chart form.

For this rare piece, Girard-Perregaux has opted for the consistent purity of a white jade stone, with translucent veins giving the perception of depth. For each dial, from a block of this material a thin sculpted disk needs to be extracted which, after careful manual polishing, reaches its ideal thickness of 0.70 mm and has a perfectly flat surface. This is followed by 17 hours of meticulous craftsmanship of an experienced miniature painter, using natural India ink mixed with a special binder. There is no room for hesitation since the ink dries very fast. The visible side of the material receives confident and talented strokes, contrasting light and dark shades, religiously applied to remain faithful to the original. Little by little, right down to the accuracy of the gray shades and to the tiny coastal and territorial curves, the famous globe and its historical reliefs emerge.

From the beginnings of modern cartography, 142 drawings of maps are attributed to Sebastian Münster (1488-1552), a German scholar who moved to Basel following his conversion to Protestantism. His work, Novus Orbis, resembled an encouragement to exploratory voyages, was included in his major work, Cosmographia Universalis, a richly illustrated and detailed cartographic collection. A versatile scholar, this teacher was also a Latin translator, historian, astronomer, and mathematician.

Girard-Perregaux has chosen to honor the memory of this man, considered to be one of the major references of modern cartography.

He was supported by over 120 employees to create his masterpiece as he relied on this the contribution of state-of-the-art artisan processes, similar to fine watchmaking today. Like wood engravings of artists of the time: Hans Holbein the younger, Urs Graf, Hans Rudolph Manuel Deutsch, and David Kandel. His style is full of para-geographic information useful to the understanding of the lifestyles of the day. It also offers a serious basis on which to compare the urban evolution of certain large cities. This content is dear to the Brand of La Chaux-de-Fonds, a watchmaking metropolis on the Unesco world heritage list.

The most colorful of the maps contained in La Chambre des Merveilles, it displays creative fields populated with fragments organized into a mosaic. It is made with genuine stone marquetry, blending the tones of blue and pink aventurine, calcite and Canadian nephrite. It takes about 95 hours to make a single dial. The finely selected stones are carved into mini-disks which, at the end of a manual polishing operation, reach 0.50 mm. The cutting and assembly of these micro-stones require extraordinary meticulousness, patience and artistry. The technique gives the impression that the land on the map floats, reinforced by the artist's micro-painting in six different tones.