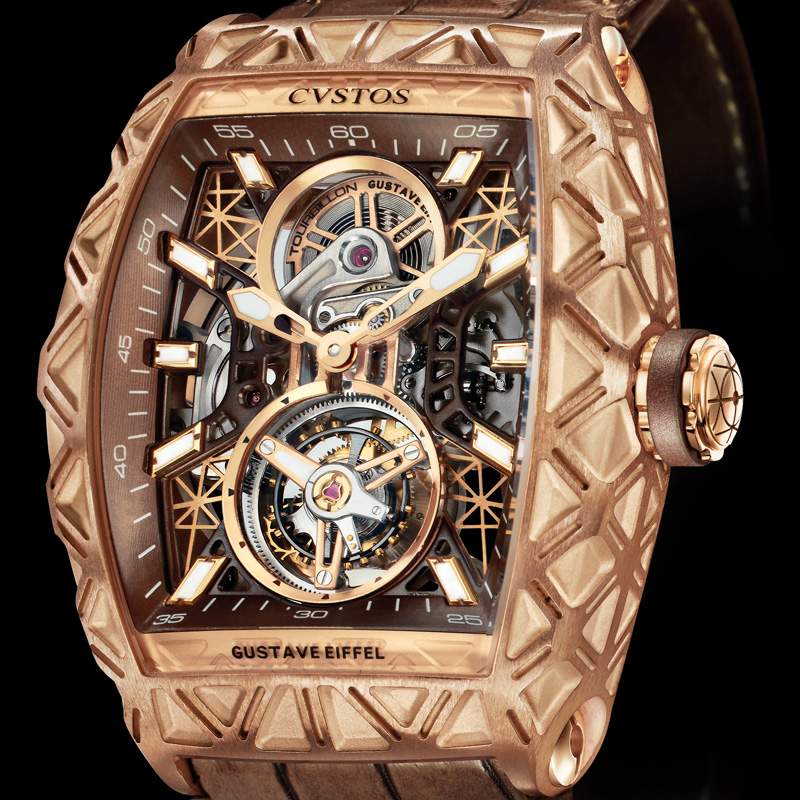 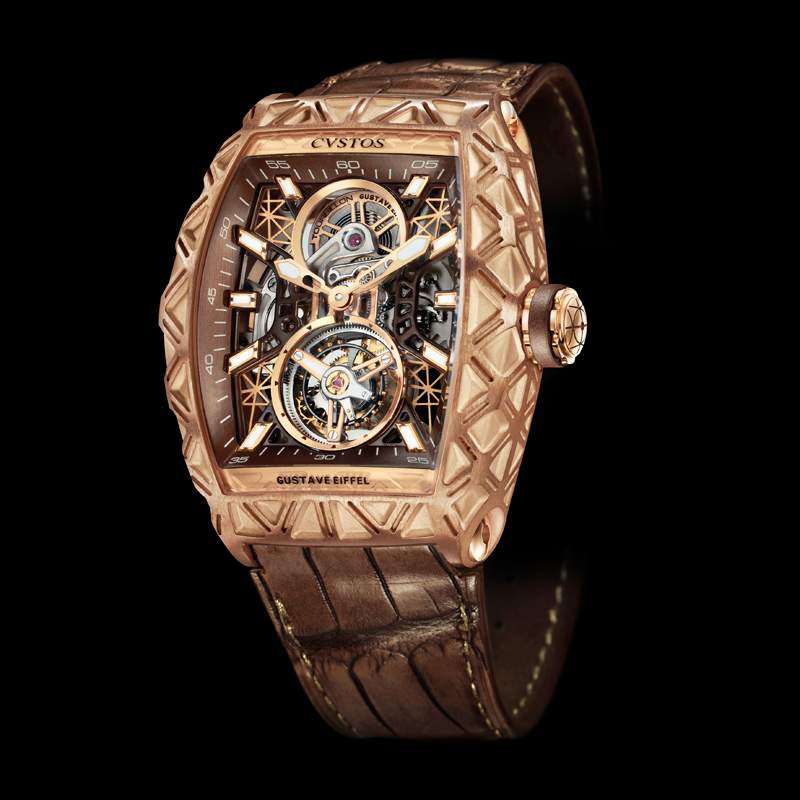 "Being the most amazing manifestation of steel construction art for which our engineers are renowned in Europe, it is one of the most striking forms of our modern national engineering.''
Gustave Eiffel.

Gustave Eiffel, this French visionary engineer who has marked an entire era thanks to his great architectural achievements, has created more than 300 structures all over the world, among which the Eiffel Tower of course, the metallic frame of the New York Statue of Liberty, as well as various bridges, including the Maria Pia of Porto bridge, and has also actively participated to the completion of the Panama canal project. So many important living works, scattered on all continents still stand proof today of the vision and exceptional know-how of the one we call the "Iron Magician" or the "Engineer of the Universe".

All these works are marked by his quest for the purity of the lines, for the combination of iron with glass, and for the strength and lightness of shapes. An everyday elegance that remains contemporary even today and that will be inspiring designers and creators for centuries to come.

Exalting the vision of his ancestor, namely to "Combine Beauty with Practicality", Philippe Couperie Eiffel is refining high-end watchmaking with his collaboration with the Swiss manufacturer CVSTOS to give rise to an exceptional timepiece called "Gustave Eiffel TOURBILLON" by CVSTOS.

Founded in 2005 by Sassoun Sirmakes, the son of the Frank Muller Group’s CEO, and by the designer Antonio Terranova, an engineer who has worked for major Swiss watchmakers, CVSTOS is a manufacture of luxury watches, specialising in the design and creation of contemporary watches that combine cutting-edge technology with luxury.

State-of-the-art technology and design, these are the values they share with Gustave Eiffel, and these are the four pillars upon which CVSTOS was founded: boldness, performance, efficiency, and elegance.

For this new model, CVSTOS continues their success in keeping with our famous "CVSTOS GUSTAVE EIFFEL" model.

It is therefore logical that the "CVSTOS GUSTAVE EIFFEL TOURBILLON" distinguishes itself by inheriting the aesthetic and technical codes of the now famous "CVSTOS GUSTAVE EIFFEL" model, being characterised by this touch of creativity and fundamental novelty for which CVSTOS is famous. Therefore CVSTOS sets the same goals by providing this new model with their famous mix of performance, avant-gardism, and aesthetics, the four pillars of the brand. The look of this new timepiece symbolises the technical and aesthetic memory of this great man.

The main theme of the look of this timepiece is inspired from and founded on the metallic structure of the famous Cross of Saint Andrew, a technical heritage, which, according to Gustave Eiffel, easily represents mathematical beauty.

There are many unifying words which have guided the career and evolution of Antonio Terranova. Chief Designer of CVSTOS, an engineer by training, is tirelessly searching for lightness and simplicity, thus perpetuating this famous "bridge between tradition and contemporaneity".

Following the lines of the famous Tower Eiffel, with the tonneau-shaped middle (very finely carved, requiring 45 minutes to process only the motives), the "CVSTOS GUSTAVE EIFFEL" has a structure akin to the Parisian elegance,inspired by the famous Cross of Saint Andrew, a symbol of rigidity, transparency, and lightness alike.

A mechanism inspired by the technical and ergonomic challenges of older times... The elevators running on the Eiffel Tower since the opening of the Universal Exhibition of 1889 are a technical feat for its time, never had an elevation system reached such a height let alone with such load. Of these historic elevators two are still in function today and are testimonies to the visionary genius of Gustave Eiffel.

The passenger cabin is carried by a cab attached to cables, and is maintained in a horizontal position by a recovery system. Underground, a hydraulic system sets two pistons in motion, which generate horizontal movements for a cab. The cab drives the cables that pull smoothly by means of a system of pulleys the cabin upwards, towards the 128th metre of this course, between the ground and the 2nd floor.

From the same spectacular and unexpected perspectives, the mechanism, which comes straight from the CVSTOS factory, and which is called "CVS2600 TOURBILLON-S", with a power reserve of 60 hours, is a hand- winding movement designed in the same vein of motives inspired from Gustave Eiffel's principles. The perforated barrel drum which allows to take a peek at the charging status of the movement reminds of the drive wheels of the Tower’s lifts. At 6 o'clock we can admire through a large sapphire crystal the flying tourbillon cage making 1 round per minute to indicate the small second, and all is magnified by the transparency of the bimetallic skeleton dial. The indicator is carved from the block through various state-of-the-art technological processes. The dial’s high readability is facilitated by the metallic indexes whose centre is covered in a luminescent material.

The transparent case-back immerses us into the heart of the mechanism to discover a structure divided by 3 bridges, each with a specific function, which isolate it from the mechanical stresses of the gear-train from the barrel (energy provider) and the tourbillon cage (regulator).

The cage of the flying TOURBILLON mounted on a high-precision bearing (clearing away any sort of shock) is structurally and completely isolated from the rest of the mechanism, with only one connection, namely one single wheel to the wheel train, independently attached to the super rigid platinum whose barrel bridge is once again attached to the latter in an autonomous way.

Such archetype was designed and created to increase the performance and thus the efficiency of the chronometric performance. An excellent visibility is therefore provided on the mechanism and the work of the master watchmakers, which is then highlighted by the three-dimensional aspect of this movement.

Carved out of 316-L steel, PVD bronze or 5N pink gold treated steel, the tonneau-shaped case is admirably emphasised by the purity of its lines and volume. This polished architectural work, easily identifiable amidst all, contributes to CVSTOS' aesthetic distinction in the closed world of luxury watchmaking.

With up to 100 meters water resistance, the "CVSTOS GUSTAVE EIFFEL" is available in fine alligator leather in various colours, which is lined with ALCANTARA® leather, with a specific look dedicated specifically to this model. This classical bracelet is also available with an elegant buckle.

The magic continues with this CVSTOS model which was designed to perpetuate the image through an inventive and innovative approach dedicated to this great man and his works.

CVSTOS reinvents with the "CVSTOS GUSTAVE EIFFEL TOURBILLON" the new codes of elegance of the Parisian avant-garde glamour in a perpetually changing creative philosophy by doing today what the others will do tomorrow..