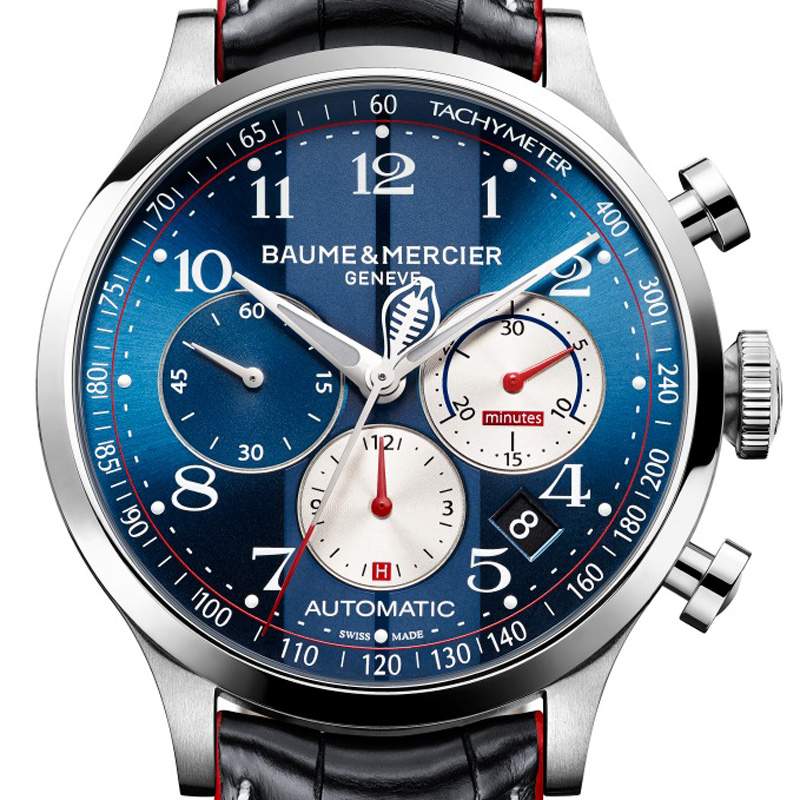 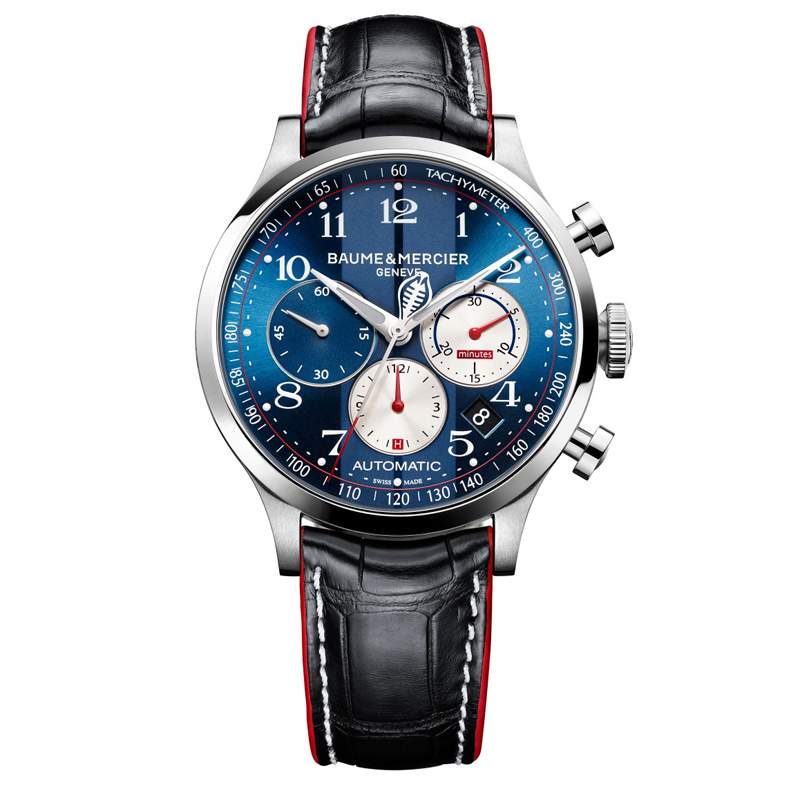 “Building your own sports car is a dream for any racer, and that’s certainly what the Cobra has been for me.”- Carroll Shelby

Birth of a Legend

In every life, there are rare moments that define who we truly are, and what we have set out to accomplish. Marked by emotion, passion and pride, these are far more than a time to remember.
They are timeless in every regard, destined to live on forever as witness to the triumph of human will and spirit.

Celebrating such moments has been the raison d’être of Baume & Mercier since our founding in 1830. From our first handcrafted timepiece to our present day collection, each reflects our unyielding belief that marking the passage of time is about more than minutes and hours. A Baume & Mercier watch is chosen by its owner because it reflects a unique aspect of life’s richest memories. A symbol worn with pride, because it communicates an individual spirit all its own.

Today, we are pleased to share a new celebration, and a new partnership. 50 years ago, automotive legend Carroll Shelby achieved a victory that would change the course of international racing forever: the 1965 FIA International Championship of GT Manufacturers. In doing so, Shelby would not only restore American racing prestige, but bring his greatest creation to world attention: the iconic Cobra.

Together with the Carroll Shelby Company, Baume & Mercier is proud to honor Carroll’s legend with limited edition Capeland timepieces that capture his most enduring triumph. Inspired by the vintage
1948 mono-push-piece chronograph in the Baume & Mercier museum, our Capeland Shelby® Cobra is distinguished by its retro accents, classic lines, chronograph and tachymeter functions, polished and satin finished case and specially crafted hands featuring the Cobra logo. It is unparalleled elegance injected with pure snake venom.

This is where the story begins.

Before Carroll Hall Shelby achieved fame as a team manager and manufacturer, he first gained iconic status as one of the most celebrated American race drivers of the 1950s. Sixteen U.S. and international speed records fell to him in 1954. Sports Illustrated named him Driver of the Year in 1956, and again in 1957. In the 1959 season, Shelby reached the pinnacle of motor sport, racing to victory for Aston Martin at the 24 Hours of Le Mans.

What Shelby couldn’t outrun was a health issue that followed him since childhood. A heart condition was taking its toll, and in February 1960 — at the age of 37 — he was diagnosed with angina
pectoralis. After deciding to end his racing career at the end of the 1960 season, Shelby began thinking about what his next challenge would be, outside the cockpit. He found it in a quest to
change the definition of the American sports car.

For years, Shelby quietly nurtured the idea that a faster, lighter and more nimble car would not only outperform European competitors, but offer build costs low enough to make it affordable to a wider audience. With funds from a new driving school in the California desert, Shelby first imported the British AC, eventually fitting a 289 cubic inch Ford V8 together with handling improvements. Yet this was only the foundation for his ultimate aim: an all-American street and track car. Its name appeared to Shelby one night in a dream, and he roused long enough to scribble it on a bedside notepad.
When he awoke the next morning, he saw the name and knew it was right. Cobra.

As the driving force behind our collection, Baume & Mercier is proud to celebrate all facets of Carroll Shelby’s achievements, including his vision and entrepreneurship. Founded as a family business in
1830, Baume & Mercier’s reputation for exceptional design, lasting performance and cutting-edge innovation is a mirror to Shelby’s own ethos. The brand has also been recognized with ten Grand Prix watchmaking awards, and seven gold medals at international exhibitions. This includes the famous Kew Observatory precision record of 1892, awarded to a Baume & Mercier watch so accurate that it was unmatched for a decade.

By the 1963 season, the Cobra and its 289 engine were dominating the US domestic race series, going on to only lose one race in its first three years of competition. Each proved to be a testing ground for Shelby and his team as they sought to extract maximum power and performance from their machine. Momentum was building for a run at the ultimate prize: the FIA International GT Championship. Among the keys to success would be a larger engine, capable of out running Europe’s best.

FIA rules ordered manufacturers to create at least 100 production models of each car entered. With that in mind, Shelby set to work testing a 390 cubic inch engine, but it wasn’t enough. With little time before the 1965 FIA season, a decision was reached to create an entirely new Cobra. To make it happen, Shelby recruited Ford to the effort, cementing a partnership that would result in Shelby taking over Ford’s entire GT racing program — and an invitation to convert the Mustang to a Shelby GT350 B-production road racer.

With a massive 427 cubic inch Ford V8 at its heart, the new Shelby Cobra would be the most feared muscle car ever built. Capable of 500 hp, the engine was so heavy that a full chassis redesign was needed, featuring a tubular coil spring design five inches wider for improved handling. Coil springs were installed all around, and the body was streamlined with flared arches that allowed for larger tires and a wider track. In every aspect, the 427 wasn’t just a leap forward for Cobra. It marked a new chapter for the American sports car, with handling, braking and raw power beyond compare.

Baume & Mercier is proud to pay tribute to the 427 Cobra in every detail of our Capeland Shelby® Cobra chronographs. Their generous case is designed to mirror the flared style of the Cobra’s own aerodynamic body lines, while blue dials and transparent white stripes take their cue from the Cobra’s famous racing livery, every accent chosen to express an elegant power. It is the ultimate expression of performance, born from the DNA of Shelby’s most revered creation.

Throughout racing history, there are wins that have changed a country, manufacturer or team. A precious few also change the entire sport. One such event is the triumph of Carroll Shelby in the
1965 FIA season. Together with a hand-chosen team of drivers and crew, Shelby entered GT competition with one goal: fulfill his dream of conquering Europe’s best with lighter, faster cars, and bring home America’s first international trophy in nearly 40 years.

The road to glory required Shelby to earn the best seven performances in 13 out of 20 races, with points only awarded for first through sixth places. In the opening race at Daytona, Shelby stormed to
1st place, and followed it with a 1st place finish at the next race, held at Sebring. From there, the battle was ferociously joined by Ferrari, who had won the GT championship every year since its founding, and held the FIA Manufacturers championship for ten of the past 12 years.

Now the world watched with awe as the Shelby team fought to stay ahead, with 1st place finishes at tracks such as Monza, Le Mans, Nurburgring and Reims. Each race saw man and machine pushed to the limit, in a battle for supremacy more extreme that anyone imagined. In total, Shelby finished first in 11 out of 20 races, including at the final race at Bridgehampton. By that point, history had already been made. Shelby American was crowned FIA GT champion. Carroll Shelby became the first individual to win as a driver, team manager and manufacturer. A feat never repeated in the annals of motorsport.

To honor this unprecedented milestone, Baume & Mercier has created extraordinary timepieces for the Capeland Shelby® Cobra collection, each produced as a true limited edition. In recognition of
Shelby’s FIA World Championship 50th anniversary, the steel chronograph is limited to a quantity of 1,965 pieces, while the 18K red gold model is limited to just 98 pieces, in tribute to Carroll Shelby’s own Cobra racing number.

Each timepiece in the Capeland Shelby® Cobra collection is designed to capture the spirit and power of Cobra with true grace.

A generous case, available in polished, creates a signature frame for a face rich with detail and personality. This begins with a homage to Cobra’s famous livery, combining its classic Guardsman Blue racing color with transparent dual racing stripes as elegant as they are historic.

At the center of the design is the iconic Cobra logo, which is forged into the seconds hand to communicate a sense of constant motion, while both hours and minutes hands are created in the shape of the Cobra’s graceful steering wheel. Completing the presentation is a sapphire crystal case back, engraved with the collection title and Carroll Shelby’s own signature.

Marrying Shelby’s reputation for exceptional performance to that of Baume & Mercier, each chronograph is assembled to our most exacting requirements. Quality and precision are of the highest standard, with automatic movement to provide effortless accuracy. It is a limited edition collection far above the expected: destined to be cherished and displayed with pride for generations. Exclusively created for those with a passion for performance and detail as uncompromising as that of Carroll Shelby himself.

A Moment to Savor

The heart of the Capeland Shelby® Cobra collection is a chronograph powered by a Swiss-made self-winding movement. A 44mm diameter case forged from polished and satin-finished stainless steel frames a dial with chronograph counters inspired by the Cobra’s iconic dashboard, and is finished in Shelby’s Guardsman Blue racing color with Superluminova blue emission to provide a soft evening glow. Completing the face are Shelby double racing stripes as a subtle accent, and special hours and minutes hands designed in the shape the Cobra steering wheel, with the infamous Cobra logo placed atop the second hand. The strap is just as elegant, created in premium black alligator with red calfskin rubber-like lining, grey stitching and triple-folding clasp with security push-pieces.
To mark this Capeland timepiece as a true original, the sapphire crystal back is engraved with the collection title, and Carroll Shelby’s personal signature.

All watches in the Capeland Shelby® Cobra collection arrive in special packaging with an exclusive miniature of the 427 Cobra, in addition to a custom brochure and card.

Once in a Lifetime

During a hospital stay for his heart condition, Carroll Shelby visited with children suffering from a range of similar ailments, including those waiting for heart transplants. The experience was so moving that Carroll became passionate about using his fame and goodwill to support them. The result was the Carroll Shelby Foundation, which raises funds to assist the families of children with major heart ailments. It has since grown to also provide scholarships and educational opportunities to disadvantaged youth across the United States.

Only one watch of this type will ever be produced by Baume & Mercier, making it a collector’s item beyond compare. The winning bidder will also receive an original Cobra painting signed by surviving members of the 1965 Cobra team, and a personal item once owned by Carroll Shelby. We wish those generous enough to bid every success, and look forward to their outstanding contribution to the Carroll Shelby Foundation.

“Yesterday is history. Tomorrow is a mystery. So live for today.”
- Carroll Shelby