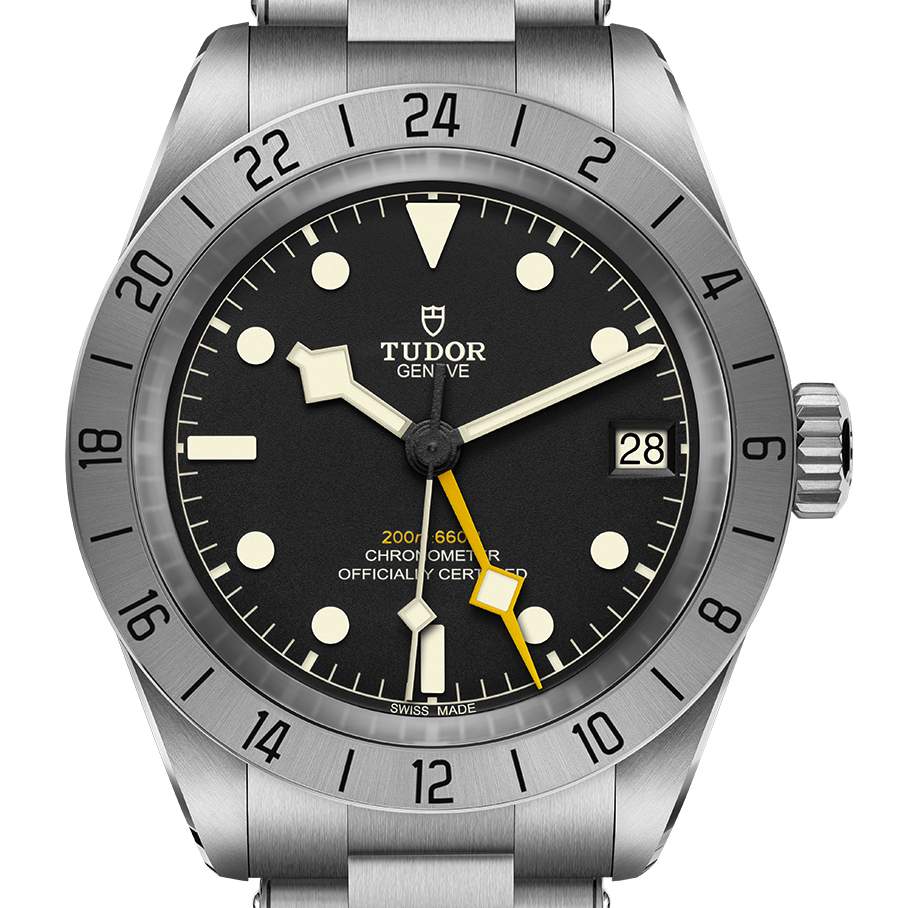 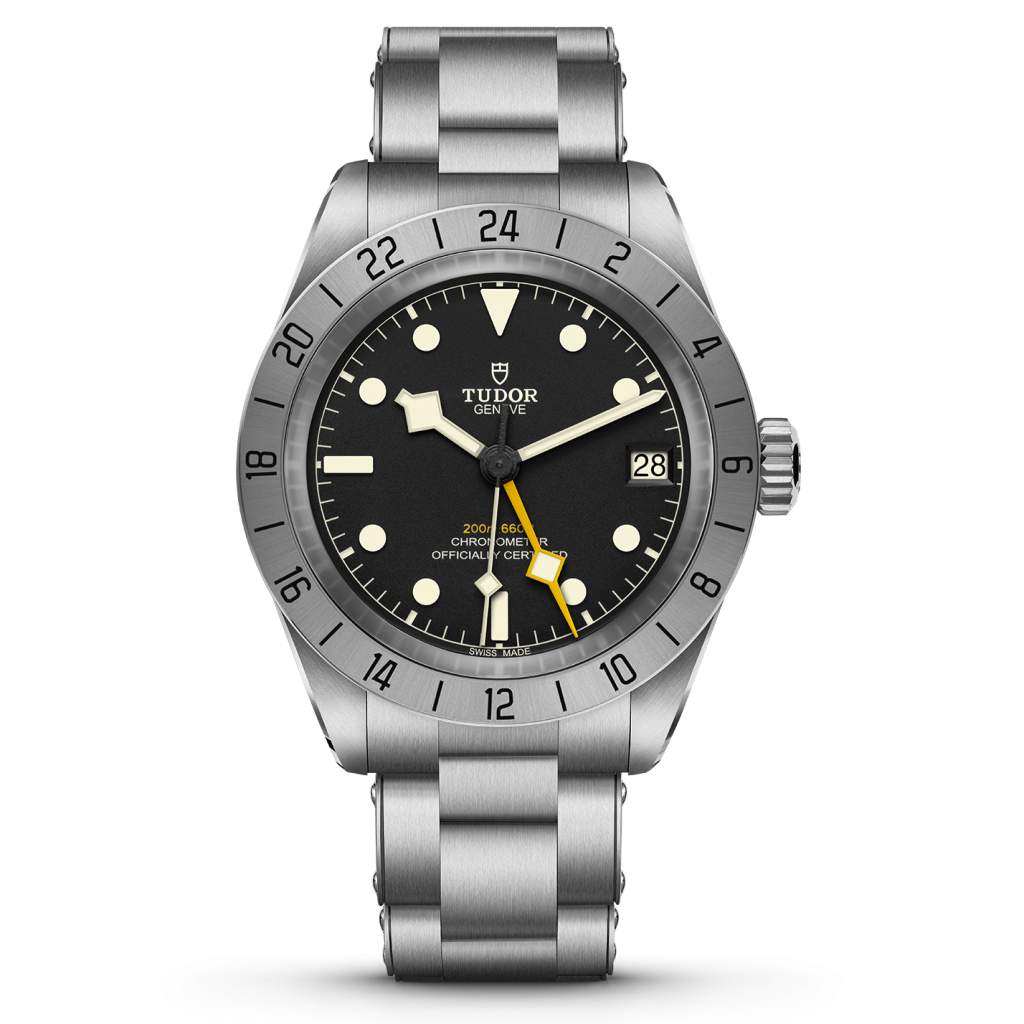 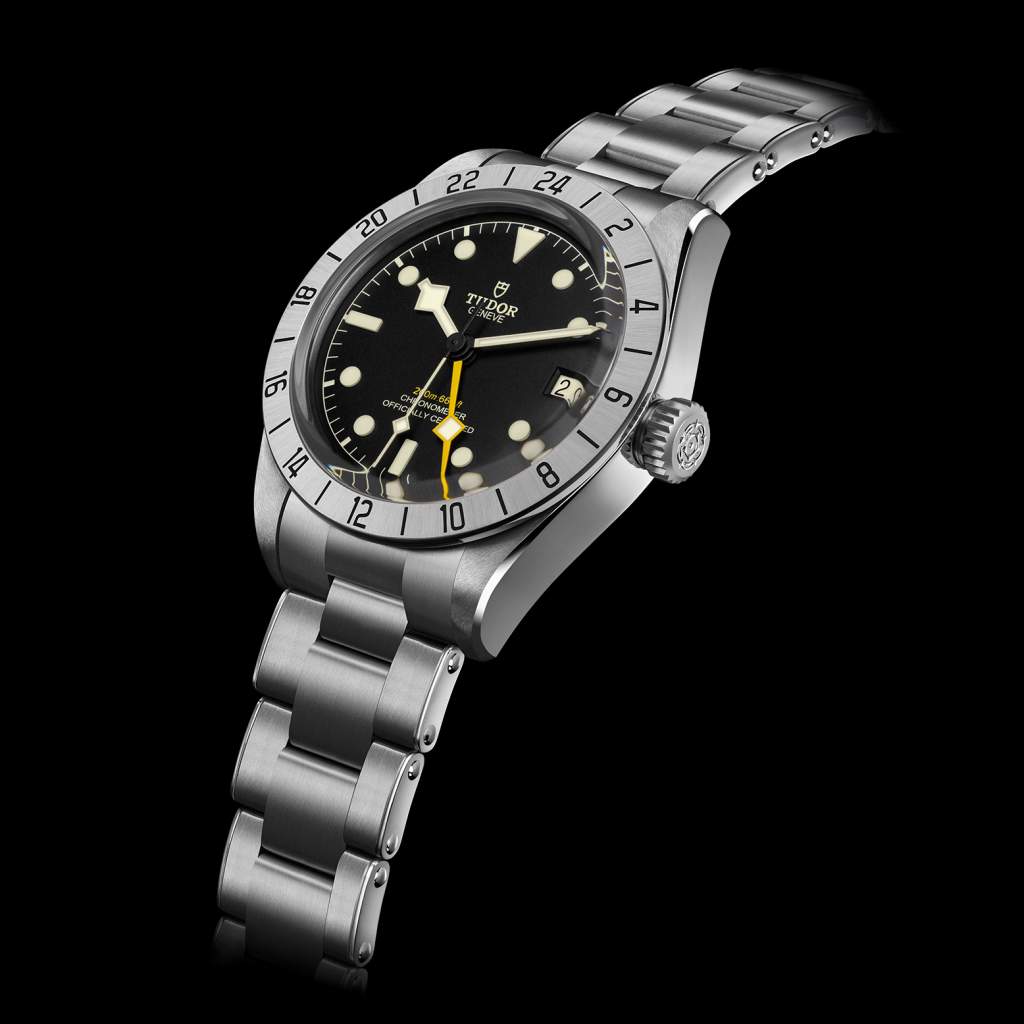 Black Bay Pro is an entirely new model with a dual time zone feature, a technical complication that establishes local time without losing sight of the time in another time zone. Compact, robust and sporty, this model boasts many unique aesthetic details and celebrates the spirit of the technical watches that TUDOR has produced for professionals throughout its history. Recognisable by its 24-hour graduated satin-brushed fixed bezel and its yellow 24-hour "Snowflake" hand, Black Bay Pro is powered by the TUDOR Manufacture Calibre MT5652 with built-in GMT function.

Throughout their history, TUDOR watches have been chosen by some of the boldest adventurers, like the 30 explorers who embarked on the two-year British North Greenland Expedition to study Arctic ice exactly 70 years ago, with TUDOR watches on their wrists. Brand founder Hans Wilsdorf supplied watches for the members of the expedition. He had just created the first waterproof and self-winding TUDOR watch, the Oyster Prince model, and couldn't imagine a better environment for testing it than the extreme climate of the Arctic. The Black Bay Pro model reflects the heritage of those instruments used by the pioneering explorers. This is a tool-watch designed for professional use.

Whilst this model is part of the Black Bay line, it introduces many new and unique aesthetic details, starting with its winding crown which has been entirely redesigned for maximum grip. Reminiscent of the curves found on the crowns of the brand's historical technical watches, this new component is set flush to the middle case band so that its tube is not visible. In another new feature, the applied hour markers on the dial are made from monobloc luminous ceramic. This feature enhances the technical aesthetic of Black Bay Pro whilst considerably increasing the luminous surface of the hour markers. A new bracelet clasp, with a TUDOR "T-fit" rapid size-adjustment system, completes the list of new innovations included in this model. Easy to use, requiring no tools and offering five positions, the "T-fit" system allows the wearer to carry out a fine, instant adjustment of up to 8mm on the clasp.

On the Black Bay Pro model, the reference time is indicated by an angular yellow "Snowflake" hand, an aesthetic hallmark of TUDOR, which completes a lap of the dial every 24 hours. Local time is indicated by another, shorter "Snowflake" hand set by a jumping hour, which can be moved either backwards or forwards. The date, displayed through an aperture positioned at 3 o'clock, is coupled with the local time hand so that when setting the time and passing midnight in retrograde, it instantly jumps to the previous day. A highly unusual, sophisticated and particularly practical function for the user.

The Manufacture Calibre MT5652 with built-in GMT function was developed by TUDOR for the Black Bay Pro model. It illustrates the technical development process which is unique to TUDOR, drawing on adaptable architecture capable of including new functions into its manufactured movements rather than resorting to additional modules. A minor detail for some, but a must for watchmaking purists.

It has been designed to ensure robustness, longevity, reliability and precision, as has its variable inertia balance, which is maintained by a sturdy traversing bridge with a two-point fixation. Together with its non-magnetic silicon balance spring, the Manufacture Calibre MT5652 is certified as a chronometer by the Official Swiss Chronometer Testing Institute (COSC), with its performance going beyond the standards set by this independent institute. In fact, where COSC allows an average variation in the daily running of a watch of between -4 and +6 seconds in relation to absolute time in a single movement, TUDOR insists on between -2 and +4 seconds’ variation in its running when it is completely assembled.

Another notable feature is that the power reserve of the Manufacture Calibre MT5652 is "weekend-proof", about 70 hours. This enables the wearer to take the watch off on a Friday evening and put it back on again on Monday morning without having to reset it.