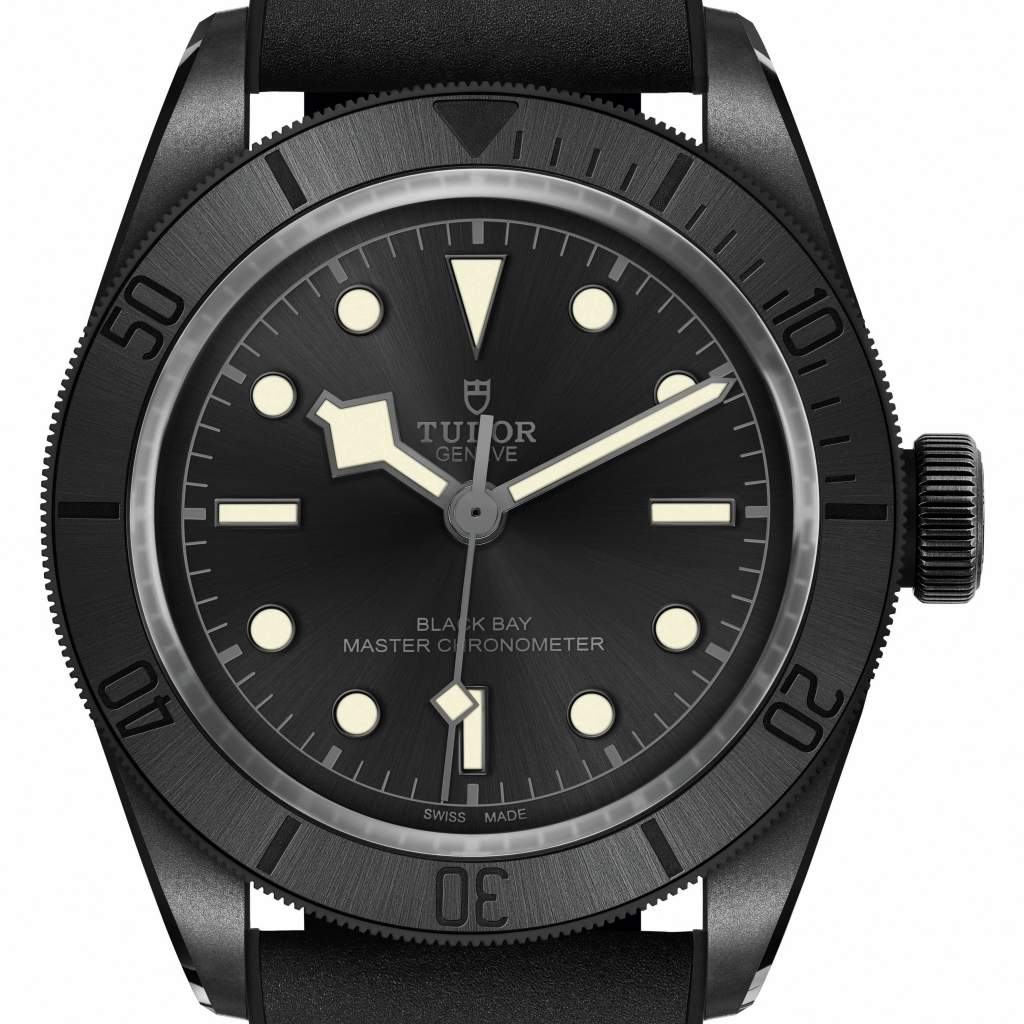 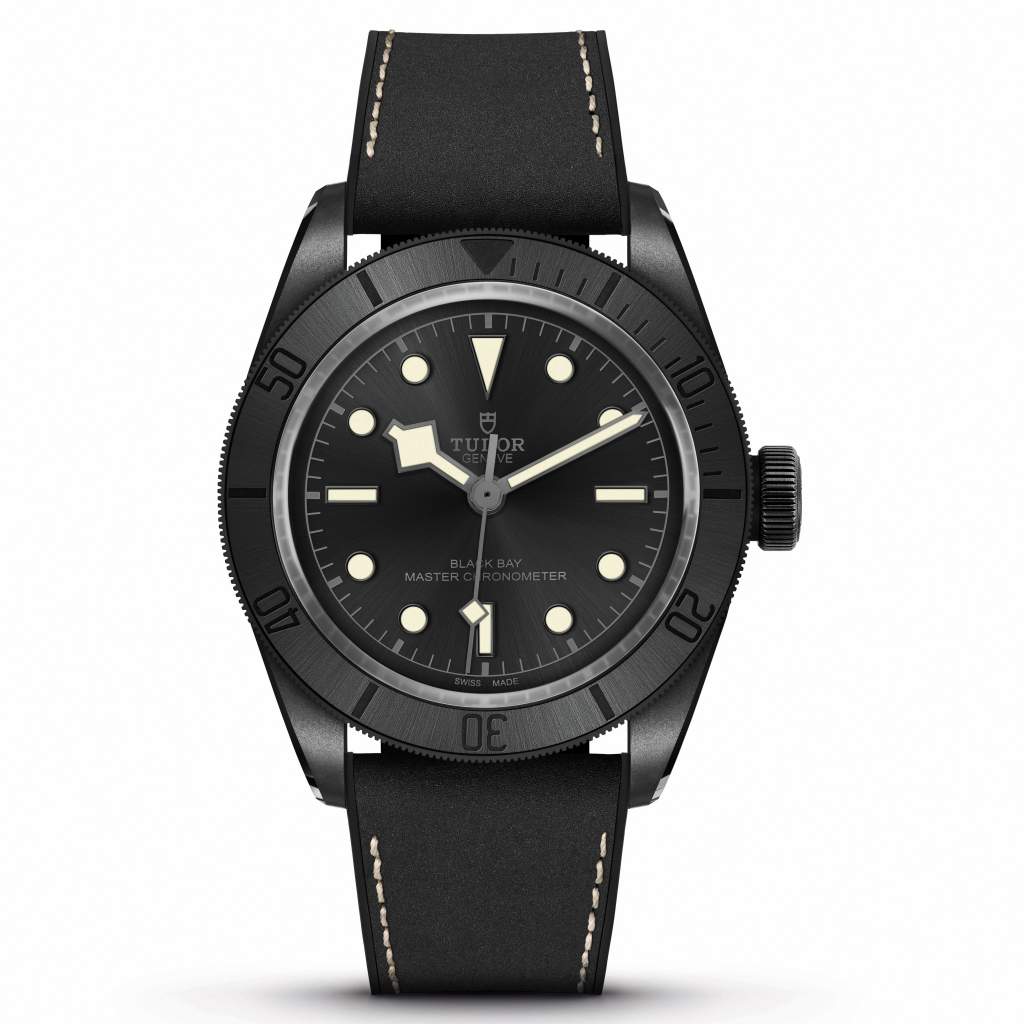 TUDOR is launching the Black Bay Ceramic model, an extraordinary watch and symbol of the brand's technical expertise, with a case in matt black ceramic, a Manufacture Calibre and a Master Chronometer certification from METAS.

The Black Bay Ceramic is a prime example of TUDOR's expert command of one of the industry's most demanding standards in terms of chronometry and resistance to magnetic fields. Tested by the Federal Institute of Metrology or METAS, this Black Bay model is the epitome of high-tech aesthetic language. Its matt black ceramic elements and black Manufacture Calibre accentuate the Black Bay Ceramic’s outstanding performance.

3. “Snowflake” hands, one of the hallmarks of the TUDOR diving watches introduced in 1969, with grade A Swiss Super-LumiNova® luminescent material

TUDOR has successfully submitted its Black Bay Ceramic model for tests to obtain a Master Chronometer certification as part of a constant bid to improve the quality of its products. This is the first application of this standard to a watch in the TUDOR collection. This certification, which requires a substantial number of changes to the TUDOR Manufacture Calibre, will mean that TUDOR will be able to offer accreditation by an independent body, confirming the excellent quality of its watches.

METAS Master Chronometer certification is comprehensive and covers the main functional characteristics of a watch including precision, resistance to magnetic fields, waterproofness and power reserve. Its standards are incredibly high, starting with precision. In order to qualify, a watch must be able to function within a 5-second range of variation each day (0 +5), that is to say 5 seconds less than the Swiss Official Chronometer Testing Institute (COSC) (-4 +6) carried out on a single movement and a second less than TUDOR's internal standard, which is applied to the brand's models with a Manufacture Calibre (-2 +4). The certification also guarantees the timekeeping accuracy of a watch subjected to magnetic fields of 15,000 gauss. Finally, it also guarantees that the waterproof capability claimed by the manufacturer conforms with the International Organization for Standardization (ISO) standard 22810:2010, as does the power reserve of each Master Chronometer watch. It should also be noted that two prerequisites are necessary before the certification can be obtained: Swiss manufacturing must conform with the criteria of Swiss Made, and the movement must be certified by the Swiss Official Chronometer Testing Institute (COSC).

CRITERIA AND TESTS FOR METAS CERTIFICATION

All the tests and prerequisites leading to the Master Chronometer certification, which the Black Bay Ceramic has achieved, are summarised below:

 Precision at two temperatures, in six different positions and at two different levels of power reserve: 100% and 33%

 Smooth functioning when exposed to a magnetic field of 15,000 gauss and precision following exposure

Aesthetically, the TUDOR Black Bay Ceramic combines contemporary, high-tech details with subtle references to its significant heritage. Its matt black monobloc ceramic case has sand-blasted surfaces with bevelled edges, mirror-polished for a striking contrast, and is finished with very pronounced lines. The insert of its rotatable bezel is also in black ceramic with a sunray satin finish. The engraved graduations in matching tones offer a complementary additional matt detail, which responds subtly to changes in light. Its dial is also black on black, the only contrast being its applied hour markers with off-white luminescent material. Finally, a hybrid leather and rubber strap, black of course, with a "Snowflake" motif on the inside and folding clasp, as well as a complimentary black fabric strap with cream band completes the stealthy black look of this model.

The Manufacture Calibre MT5602-1U, which powers the Black Bay Ceramic, displays hour, minute and seconds functions. It has the finish typical of TUDOR Manufacture Calibres but is entirely in black, in line with the general appearance of the watch, emphasising its distinctive performance. Its rotor in black tungsten monobloc is openwork and satin-brushed with sand-blasted details, and its bridges and mainplate have alternate sand-blasted, polished surfaces and laser decorations.

Its build is designed to ensure robustness and precision, as is its variable inertia balance, which is maintained by a sturdy traversing bridge with a two-point fixing. Together with its non-magnetic silicon hairspring, the Manufacture Calibre MT5602-1U is able to function within a tolerance range of 5 seconds (0 +5).

Another notable feature is that the power reserve of the Manufacture MT5602-1U Calibre is "weekend-proof"; that is to say, it has been certified for 70 hours by METAS, which enables the wearer to take the watch off on a Friday evening and put it back on again on Monday morning without having to wind it. Even if you need a weekend away, your watch does not.

Like other models in the Black Bay range, the Ceramic adopts TUDOR's characteristic angular hands known as "Snowflake" that appeared in the brand’s 1969 catalogue. The result of a subtle blend of traditional aesthetics and contemporary watchmaking, the Black Bay line is far from simply being an identical rerelease of a classic. Resolutely anchored in the present, it brings together almost seven decades of TUDOR diving watches. Whilst it is neo-vintage in conception, its manufacturing techniques and its robustness, reliability, durability and precision as well as the quality of its finish are above modern industry standards.

The history of TUDOR diving watches dates back to 1954 with the launch of reference 7922. Waterproof to 100 metres (330 ft), it was the firstborn in a long line of "divers". Affordable, robust, reliable and precise, it represented the philosophy of a tool-watch of the brand. The seven decades following its introduction have witnessed the constant improvement of this TUDOR diving watch and those that have gained unanimous acclaim from professionals in the field, including some of the greatest military navies in the world.

Since its creation by Hans Wilsdorf in 1926, and in line with his vision of an ideal watchmaking product, TUDOR continues to produce the most robust, durable, reliable and precise watches in existence today. Bolstered by this experience, and confident in the knowledge of the superior quality of its watches, TUDOR is offering a five-year guarantee on all its products sold after 1 January 2020. This guarantee does not require the watch to be registered, or any maintenance checks, and it is transferable. All TUDOR products bought between 1 July 2018 and 31 December 2019 will benefit from an 18-month extension to their original guarantee. TUDOR also recommends that its watches should be serviced approximately every 10 years depending on the model and the extent of its use on a day-to-day basis.

TUDOR is an award-winning Swiss-made watch brand, offering mechanical watches with refined aesthetics, proven reliability and unique value for money. The origins of TUDOR date back to 1926, when "The Tudor" was first registered as a brand on behalf of the founder of Rolex, Hans Wilsdorf. He created the Montres TUDOR SA Company in 1946 to offer watches with the quality and dependability of a Rolex, at a more affordable price point. Because of their robustness and affordability, throughout their history TUDOR watches have been chosen by the boldest adventurers on land, underwater and on ice. Today, the TUDOR collection includes emblematic models such as Black Bay, Pelagos, 1926 and Royal. Since 2015, TUDOR has also offered mechanical manufacture movements with multiple functions and superior performance.