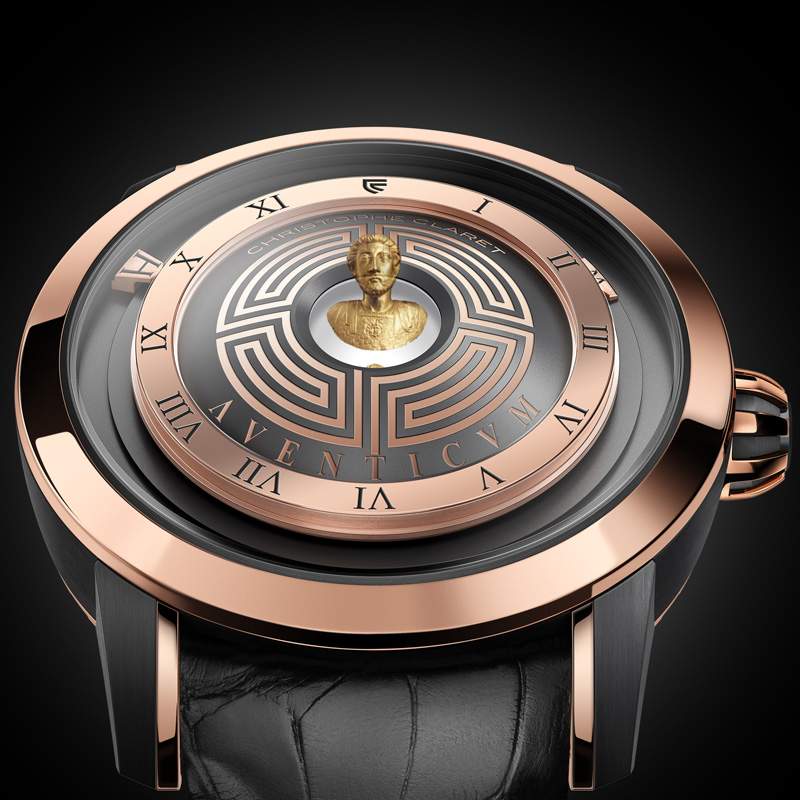 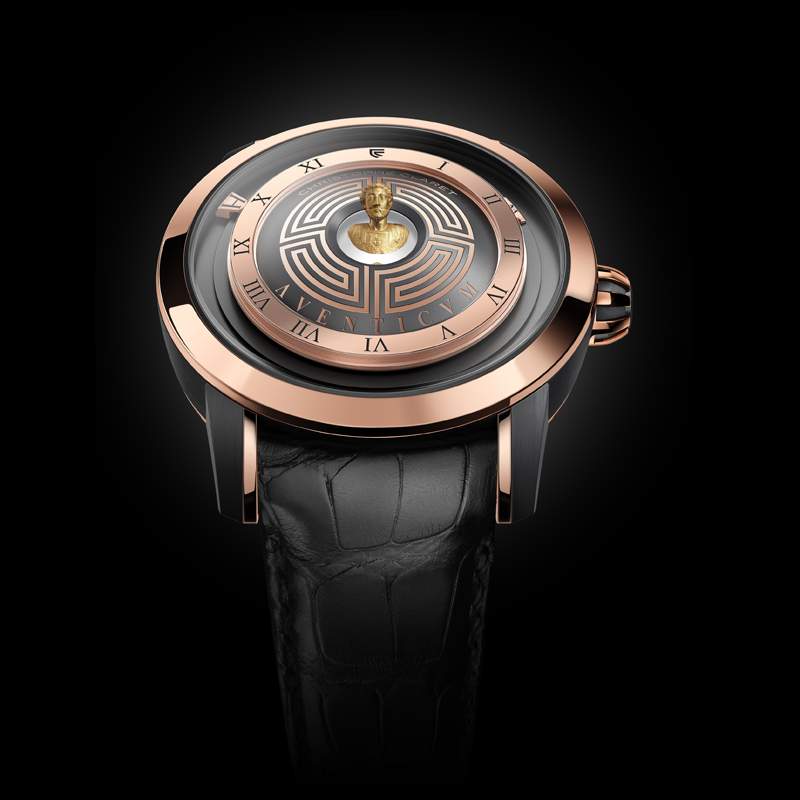 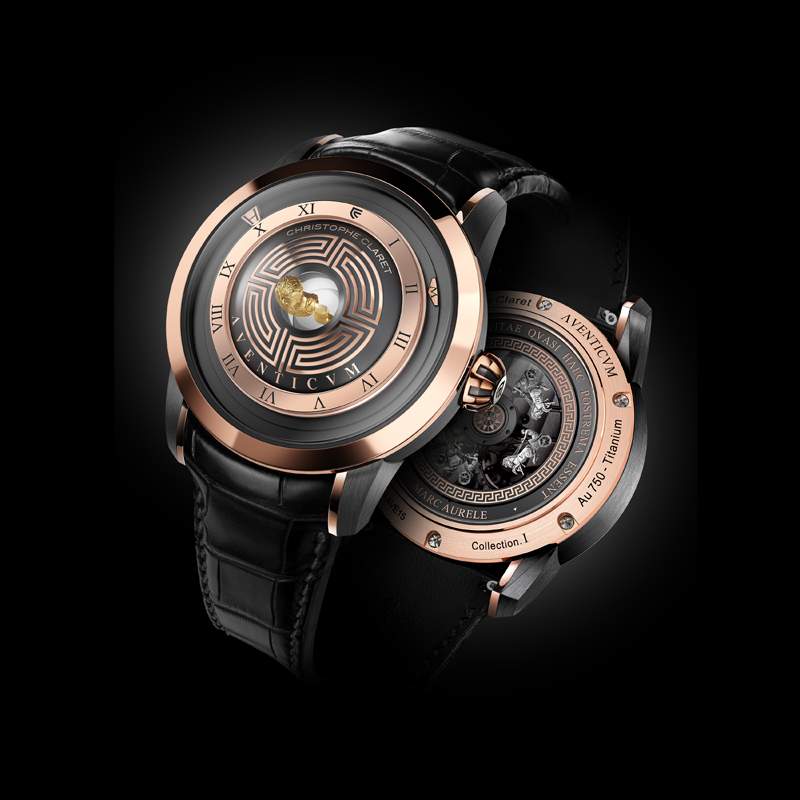 Christophe Claret’s passion for history has inspired him to create Aventicum, a tribute to the capital of ancient Roman Helvetia and to highlight the extraordinary work of the Avenches Roman Museum. In the center of its dial, Aventicum reveals a miniature gold bust of Roman emperor Marcus Aurelius. The micro-engraved effigy is particularly three-dimensional thanks to an ingenious optical effect.

Christophe Claret has always been intrigued by the history of Aventicum, which was the capital of Roman Helvetia for more than 300 years and the ruins of which now lie near the Swiss town of Avenches. Even today at the Aventicum excavation sites, archaeologists continue to unearth precious artefacts dating from this rich era of antiquity. In 2013, Christophe Claret decided to create a three-dimensional film in partnership with Philippe Nicolet and his production company, NVP3D, to document the incredible relics now belonging to the Avenches Roman Museum and the town of Avenches. The advantage of using 3D for a film of this nature becomes evident on the big screen. Displaying the ancient artefacts in three dimensions allows for incomparable detail of even the tiniest objects, giving audiences and researchers alike the opportunity to rediscover the rich history of Aventicum. Among the excavated objects was a priceless finding: a solid gold bust of Emperor Marcus Aurelius, which was found in 1939 when an old pipe was being cleaned. This precious discovery is one of only three known Roman busts of this style in the world. Other similar statues were most likely melted down and recycled into other objects over the centuries. Due to the museum’s limited exhibition space, many of the ancient Roman capital’s excavated objects cannot be properly displayed for the public. Christophe Claret hopes that his Aventicum-inspired timepiece will help raise awareness about the phenomenal efforts of the Avenches Roman Museum to preserve these vestiges of this ancient civilization. He also wishes to generate support from the Swiss government to construct a new building to conserve and showcase this incredible heritage.

The ancient capital city’s history, coupled with the 3D film, has served as inspiration for the Aventicum timepiece. A micro-engraved gold replica of the Marcus Aurelius bust can be found in the centre of the dial. Incorporating a technique never before used in the history of watchmaking, the faithful, small-scale representation of the Emperor – measuring less than three millimetres – is displayed in magnified form thanks to a clever invention called the mirascope.

The mirascope is comprised of two identical parabolic mirrors arranged one on top of the other, creating an elliptical shape. The convex mirror on top has a hole in the middle. When an object is placed in the centre of the concave bottom mirror, the reflection from the top mirror creates a hologram of the object, which appears nearly two times larger than it actually is. In implementing this optical effect in Aventicum, the bust of Marcus Aurelius looks as if it is thrusting out of the middle of the watch. The illusion is so realistic that it is hard to resist attempting to touch the gold sculpture through the sapphire glass, but it would be in vain…

Aventicum, like all Christophe Claret signature timepieces, epitomizes the highest standards of haute horlogerie embodied by the brand. Developing the technically demanding mirascope to function perfectly took extreme dedication and focus. Months of research and several prototypes were integral to obtaining the desired optical effect. The next critical step was designing and fabricating the hour and minute hands, which had to be reconfigured, as the mirascope was now the centrepiece of the watch. The hands became pointers revolving on an invisible ring around the perimeter of the dial, each equipped with a counterweight to optimize stability. The challenge of creating the hands for Aventicum was to find a material light enough to compensate for the relatively larger – though mainly concealed – size the display mechanism. The solution was to use anticorodal aluminum, which has an excellent rigidity/weight coefficient.

Turning over Aventicum, the patented, transparent sapphire-winding rotor of the automatic movement can be admired through the display back. The rotor is embellished with five numbered Roman Gaul racing chariots in full swing of a thrilling competition. Yes, the playful spirit found on many of Claret’s timepieces is apparent yet again, this time in the form of a fun, interactive race: by positioning Aventicum horizontally and performing one or two waving movements, the chariots are jumpstarted in the wake of the rotor’s action, which then stops. The player whose chariot finishes above the “A” of Aurèle (Aurelius), engraved on the periphery, is the winner. Aventicum embraces its Roman heritage, as this great civilization’s artistic influence suffuses the timepiece by way of a number of carefully thought out adornments – like the Roman numerals forming the hours or the labyrinthine motif found on both the dial and back of the watch, encircling the sapphire-winding rotor. As Marcus Aurelius was not only an emperor but also a philosopher, Christophe Claret elected to engrave, in Latin, one of his famous maxims on the back of the watch: “Perfice Omnia facta vitae quasi haec postrema essent”, or “Perform every act in life as though it were your last.” Christophe Claret has licensed the patent from Vianney Halter regarding the relationship between the outer sapphire rotor ans its inner bearing.