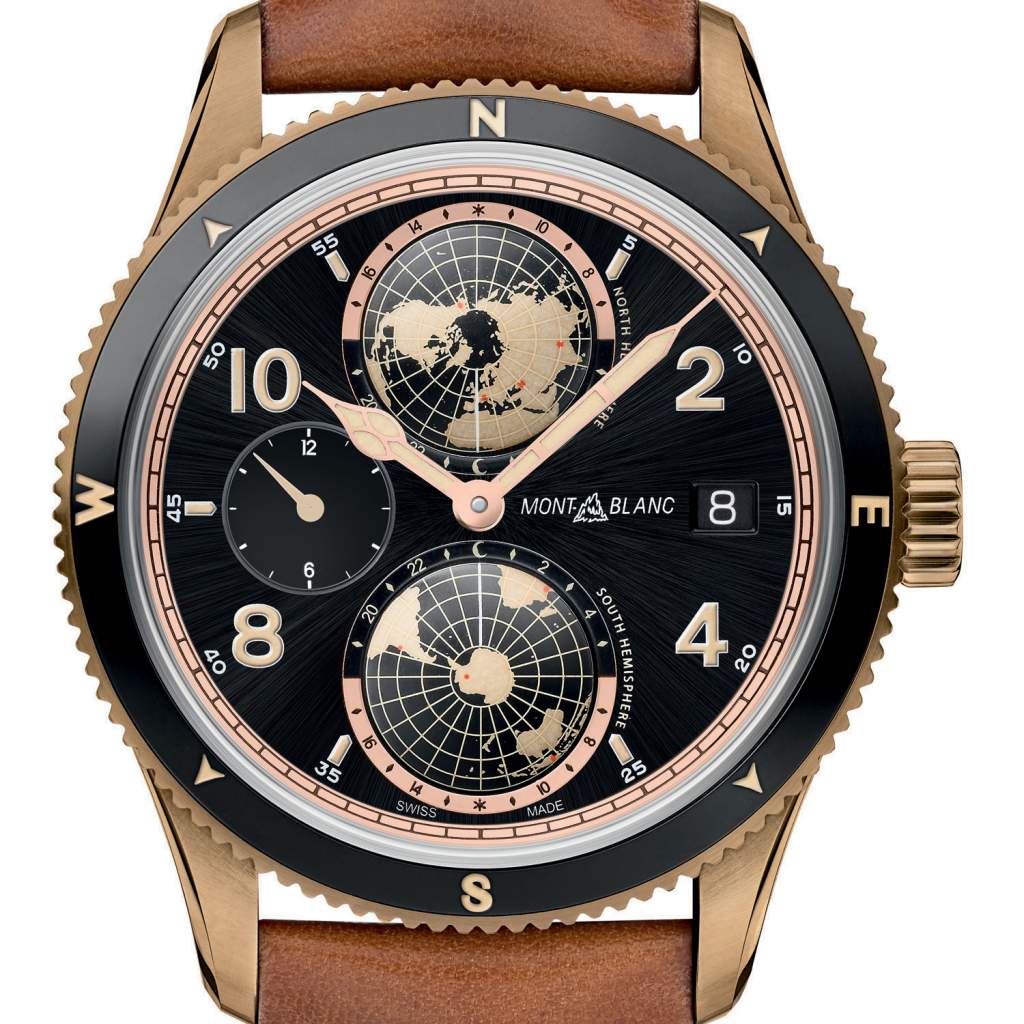 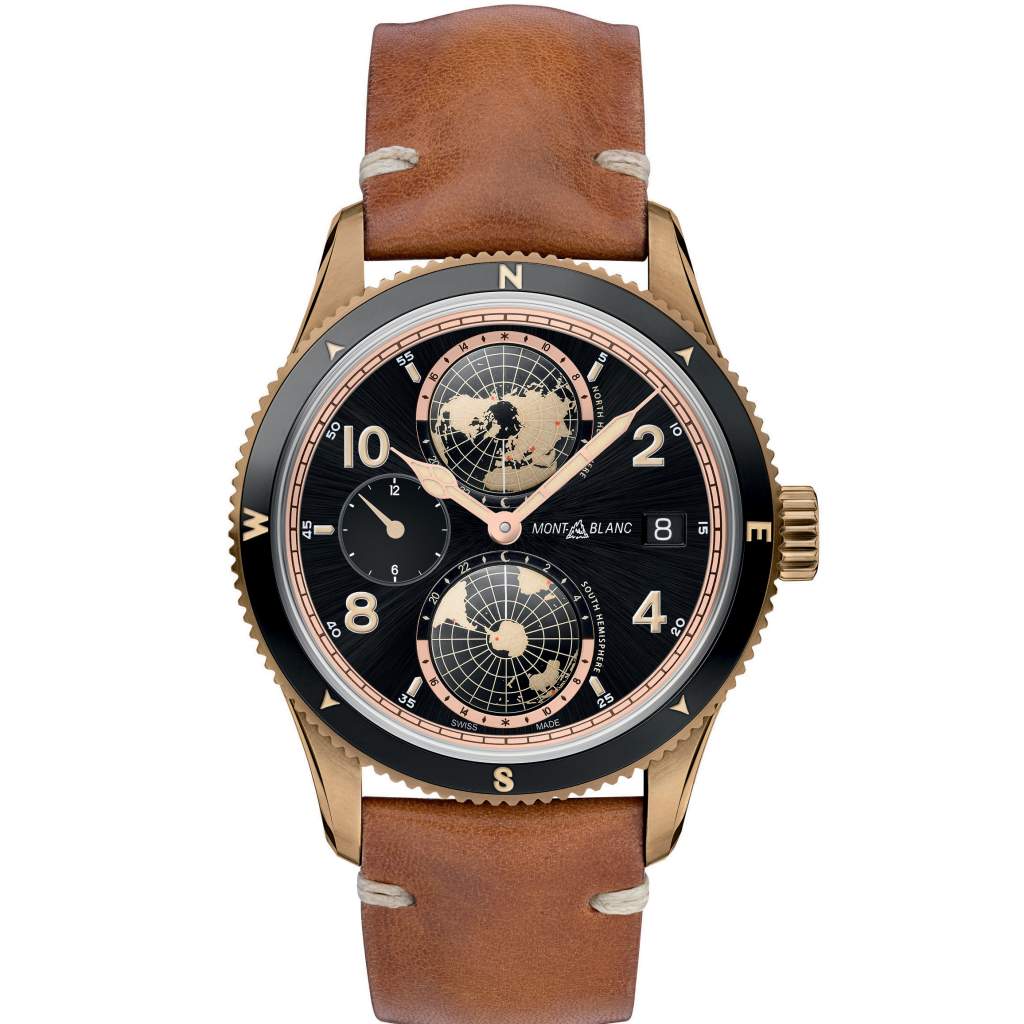 Inspired by the legendary professional Minerva watches from the 1920s and 30s that were meant for military use and mountain exploration, the 1858 Geosphere Limited Edition 1858 pays tribute to the 160 years of the Minerva Manufacture and its extraordinary heritage.  These watches were highly accurate, legible and robust for use in extreme conditions.

Montblanc Villeret’s watchmaking tradition began in 1858 when Charles-Yvan Robert founded a watch workshop in the Saint-Imier valley. The Manufacture progressively gained international recognition for its precision timepieces, becoming a leading specialist in the fabrication of professional watches and stopwatches. Minerva produced a number of movements equipped with chronograph functions such as the legendary calibre 19.09 (19 lines / launched in 1909), featuring the recognizable V-Chrono shaped bridge.

Several patents for precision timers were filed during this period, attesting to the Manufacture's innovative spirit. In the 1920s, Minerva invented one of the first manually wound monopusher chronographs specially developed for wristwatches, marking a new chapter in the Manufacture's history. This was possible thanks to the smaller size of the movement, the calibre 13.20 (13 lines / launched in 1920), featuring the iconic V-shape bridge – whose design was protected in 1912 – a column wheel, an horizontal coupling and a traditional frequency of 18,000 A/h. In addition to the calibre 13.20, the calibre 17.29 was produced during the 1930s and was one of the slimmest monopusher chronographs of the time, measuring a mere 5.6 mm in height.

These developments symbolize the level of mastery and innovation reached by Minerva over the years and consolidate its reputation in the manufacture of monopusher chronographs with various case sizes and complications. Upholding the extraordinary Minerva legacy and paying tribute to 160 years of fine watchmaking history, these horological achievements have become the inspiration for the development of the new Montblanc 1858 timepieces.

The Spirit of Mountain Exploration

The Montblanc 1858 collection finds its inspiration in the world of mountain exploration. Reinterpreting the Minerva pocket watches and chronographs from the 1920s and 1930s, the new Montblanc 1858 Geosphere Limited Edition 1858 captures the spirit of the past in a modern way, expressing the trend of back to nature and adventure. Combining materials such as a special alloy of bronze that evolves over time with the innovative and useful in-house Worldtime Geosphere complication, this timepiece is designed for the modern-day explorer who likes to set his own challenges. He is someone who likes to express his own personal style, lives an authentic way of life, loves adventure, and finds harmony with nature that allows him to reach new heights.

The satin-finished case has been slightly reworked with horns that have been slimmed down thanks to polished, beveled edges that underline its shape. Other details include fluted crown that recall those on period timepieces and domed sapphire crystal glass box, increasing the robustness and the look of the watch. In order to guarantee its performance, the Montblanc 1858 Geosphere Limited Edition 1858 undergoes over 500 hours of simulated wear, with specific testing and controls under extreme conditions. It is also water-resistant to 100 meters, ensuring performance in all environments.

Paying tribute to the 160th anniversary of Minerva, the Montblanc 1858 Geosphere Limited Edition 1858 embodies the spirit of mountain exploration with a professional and innovative timepiece that is destined for those who travel the world in their quest for exploration. This timepiece features a brand-new manufacture worldtime complication powered by the calibre MB 29.25, developed by the Montblanc engineers in Villeret.
The Montblanc 1858 Geosphere Limited Edition 1858 is dedicated to the world’s Seven Summit mountaineering challenge, the holy grail of mountaineering adventures where climbers set out to ascend the highest mountains from each continent. The Seven Summits challenge is recognized as the most difficult mountaineering quest worldwide and only 500 athletes have achieved the mission to date.

This timepiece features a worldtime complication with two turning domed hemisphere globes, which make a full rotation in 24 hours. The northern hemisphere at 12 o’clock turns anti-clockwise, while the southern hemisphere turns clockwise. They are both surrounded by a scale with the 24 time zones, along with a day/night indication in contrasting colours. The longitude reference meridian for both hemispheres is highlighted with a white line coated with SuperLumiNova®. Additionally, a second time zone display is located at nine o'clock and a date (linked to the local time) is indicated in an aperture at three o'clock. With this new worldtime display of the two hemispheres, the Montblanc 1858 Geosphere  Limited Edition 1858 brings a new instinctive way of appreciating different time zones.

The world’s Seven summits are marked on the globes with red dots, enhancing the spirit of mountain exploration. They are also engraved on the case back along with the unique drawing of the Mont Blanc mountain, a compass and two crossed ice pick-axes. SuperLumiNova® has also been applied to the continents for increased visibility and performance at night.

The black dial of the Montblanc 1858 Geosphere Limited Edition 1858 features contrasting colours with the addition of red gold-coated elements. The watch includes all the design codes from the 1858 collection with beige luminescent Arabic numerals and indexes, the authentic Montblanc logo from the 1930s, domed and resized cathedral-shaped hands, as well as a railway track that all come together in this highly legible, vintage-inspired timepiece.

The timepiece comes with a bronze case which features polished and satin-finishing as well as a vintage fluted crown with the Montblanc emblem in relief. A new bidirectional bronze bezel with shiny black ceramic completes the design. The bezel is also fluted on the flank for a better grip and features the four cardinal points which have been engraved.