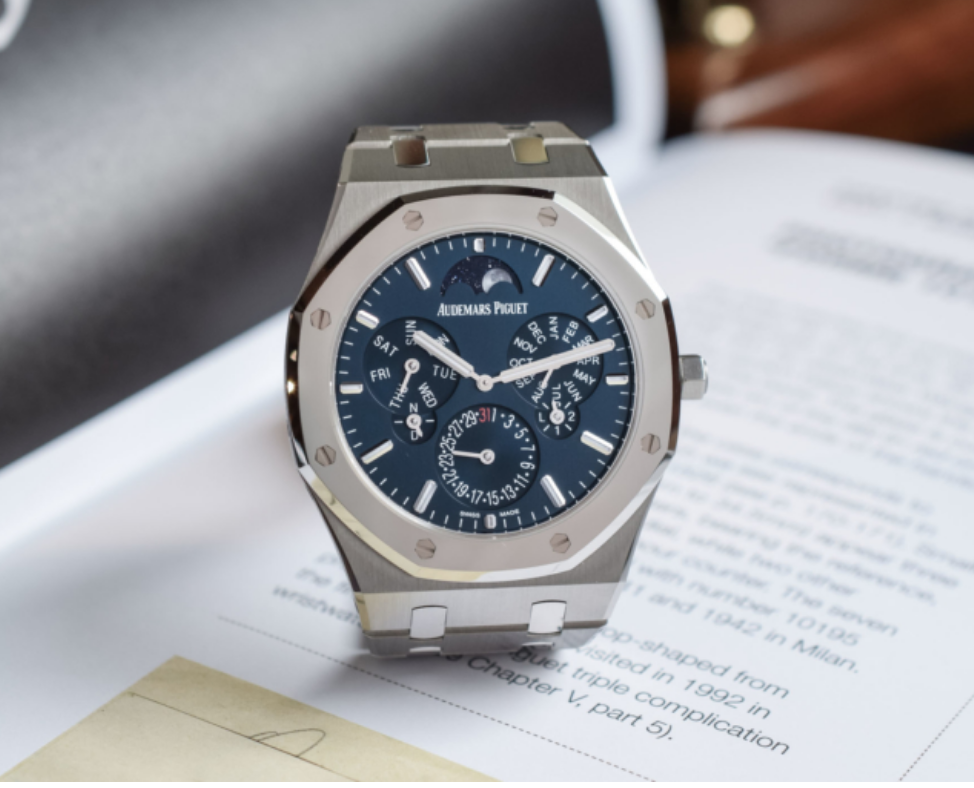 This is it, the 2019 edition of the GPHG, known as the “Oscars of the watchmaking industry”, has come to a close and the prize for the best watch of the year, also known as the “Aiguille d’Or”, has been awarded. This year again, the Grand Prix aims at rewarding creativity, innovation and haute horlogerie – in short, the best the watchmaking industry can produce. So here’s the best watch of 2019, the Audemars Piguet Royal Oak Selfwinding Perpetual Calendar Ultra-Thin (based on the RD#2 concept), reviewed here, also known as the thinnest perpetual calendar watch ever – as well as all the other prize winners of the GPHG 2019.

As often, the Grand Prix tends, in the normal categories, to award some impressively complicated (and expensive) watches. The GPHG 2019 doesn’t make an exception, with most of the winning watches being a demonstration of the best skills of the industry. While last year independent watchmakers were at centre stage, this year it appears that innovation has been the main topic, with several watches being best in class in their category (AP of course, but also Bvlgari, Vacheron or Seiko, with a Spring Drive watch). Certainly, we would love to see a few more “normal” watches, some that are actually accessible to mere mortals, but on the other hand, the GPHG celebrates watchmaking as an industry… and that industry is also here to make us dream.

And now, here’s the full list of watches (and people) awarded at the GPHG 2019. 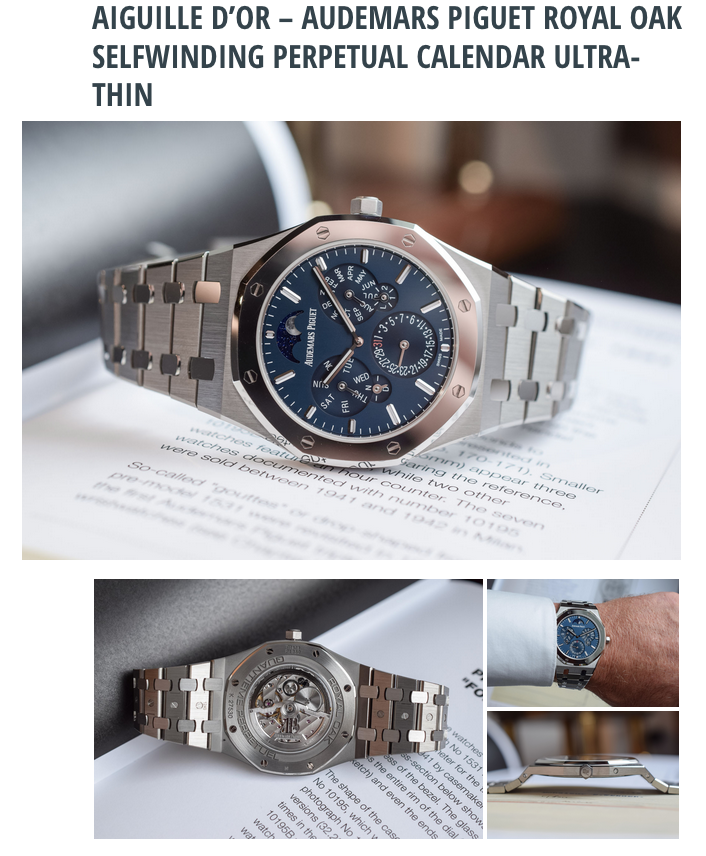 The Aiguille d’Or celebrates the best watch of the year, all categories included. This year, the GPHG 2019 gives full credit to a mechanically impressive watch, the commercial version of the RD#2 Concept, the Audemars Piguet Royal Oak Selfwinding Perpetual Calendar Ultra-Thin. This piece, with its 2.89mm thick movement and 6.3mm thick case, is the thinnest perpetual calendar ever created by the watch industry. This was made possible by extensive work on the movement, by removing some of the usual layers of a QP, shaving millimetres everywhere in the movement and the case. No need to say, this watch is an impressive achievement. And with its classic Royal Oak look and titanium case, it is one surprisingly wearable piece. Kudos to AP for this victory. 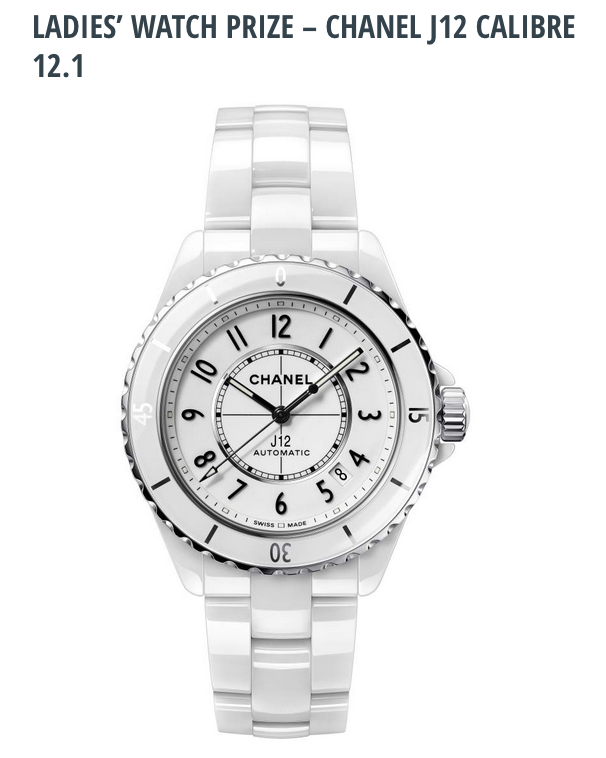 For the ladies’ watch prize, the GPHG 2019 awards one of the few ultra-iconic watches for ladies, the Chanel J12, a watch that somehow made the full ceramic concept trendy. The newest version presented here features a movement based on Tudor’s manufacture calibre. 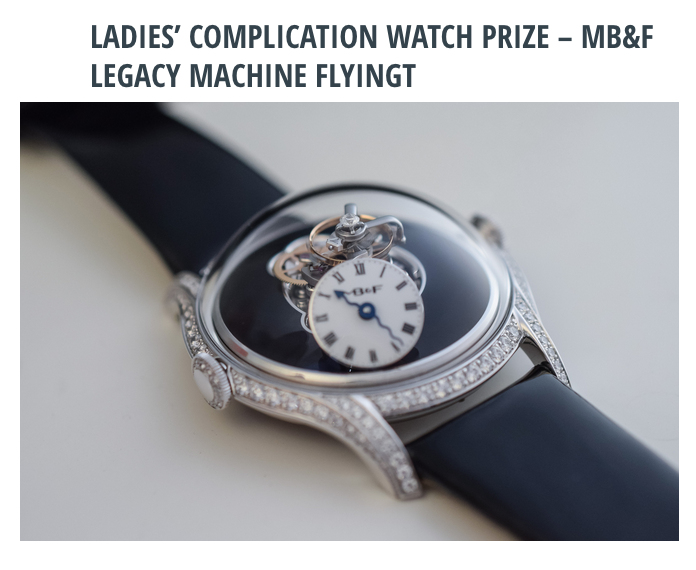 Here, we talk about women’s watches that are remarkable in terms of their mechanical creativity and complexity. And indeed, MB&F’s very first feminine piece is a stunning example of the brand’s creativity. Mechanically complex, surprisingly elegant, bold… Well-deserved prize for Max Büsser and Friends. 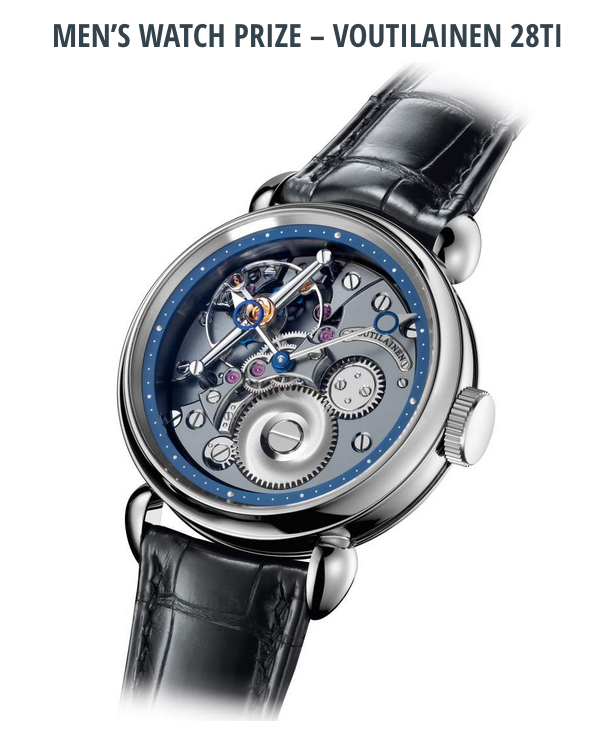 This year, in this category that includes men’s watches comprising only simple indications (no major complications), the GPHG 2019 once again rewards the work of independent watchmaker Kari Voutilainen and his 28TI model, a watch with an inverted movement that allows you to contemplate the beauty of the hand finishing. 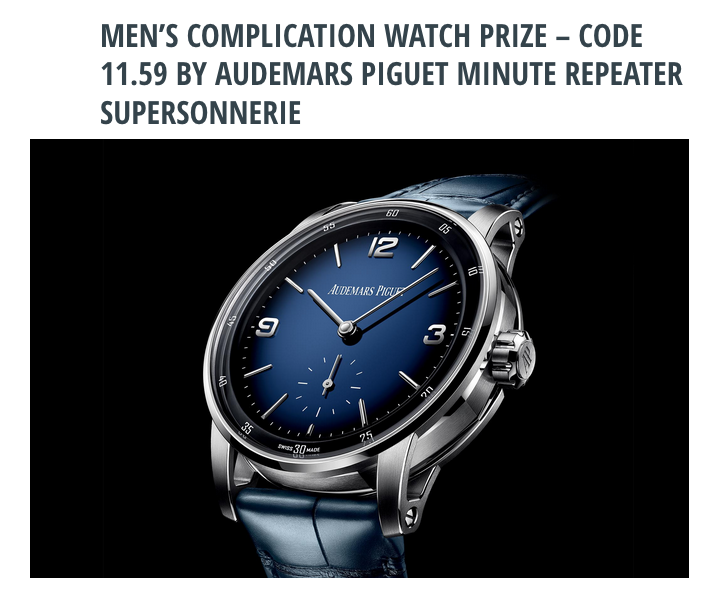 ﻿﻿In this category that celebrates men’s watches that are remarkable in terms of their mechanical creativity and complexity, AP wins a second award, with its controversial watch, Code 11.59. However, we’re talking here about an upgraded minute repeater watch with several innovative solutions to improve both the quality and the volume of the sound produced. In addition to that, the Code 11.59 by Audemars Piguet Minute Repeater Supersonnerie features a superb gradient blue enamel dial. 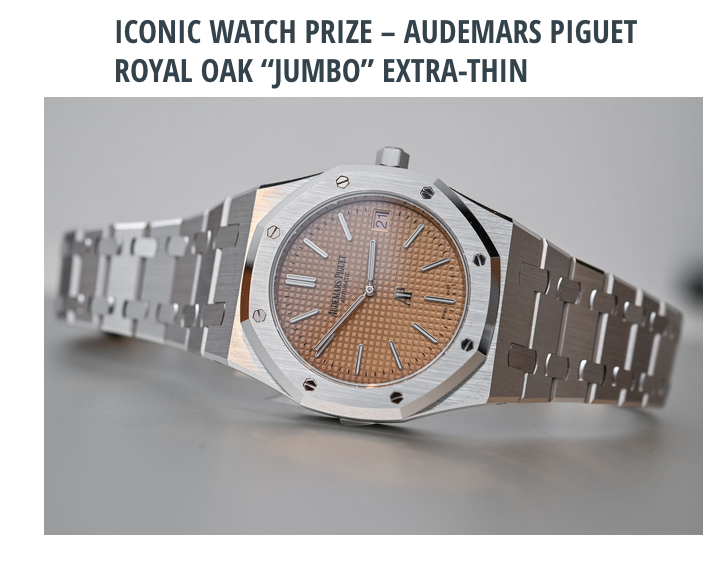 The iconic watch prize, a new category for the GPHG 2019, concerns watches from an emblematic collection that has been exercising a lasting influence on watchmaking history and the watch market for more than 25 years… And what could be more emblematic than the Royal Oak “Jumbo” Extra-thin – especially this white gold version of the 15202 with an incredible pink gold/salmon coloured dial? And that makes 3 prizes for Audemars Piguet. 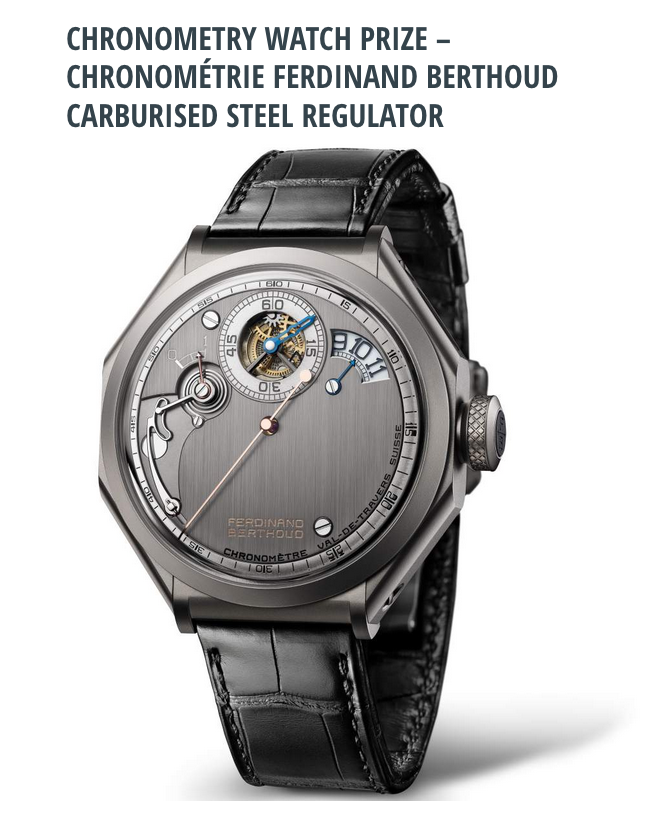 The Chronometry prize concerns mechanical watches comprising at least one tourbillon and/or a special escapement and/or another development improving chronometry (precision timekeeping). After winning the GPHG in 2016, Chronométrie Ferdinand Berthoud is back in the game with a new prize… Well, for a brand named Chronométrie, sounds logical to win the Chronometry prize. 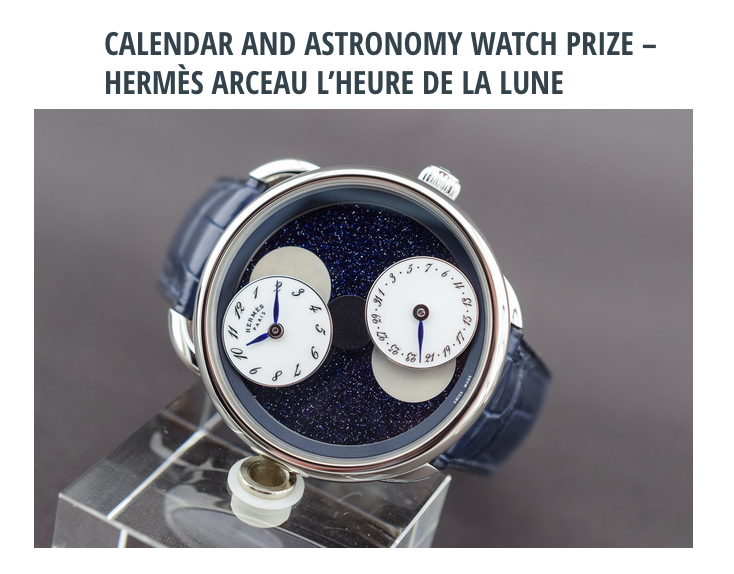 In this category for mechanical watches comprising at least one calendar and/or astronomical complication (e.g. date, annual calendar, perpetual calendar, equation of time, complex moon phases display, etc.), the GPHG 2019 awards the Hermès Arceau L’heure de la lune – and rightfully so, as this watch not only has an elegant and poetical design but also a rather fascinating display where the indications rotate around the dial to indicate the moon phases. 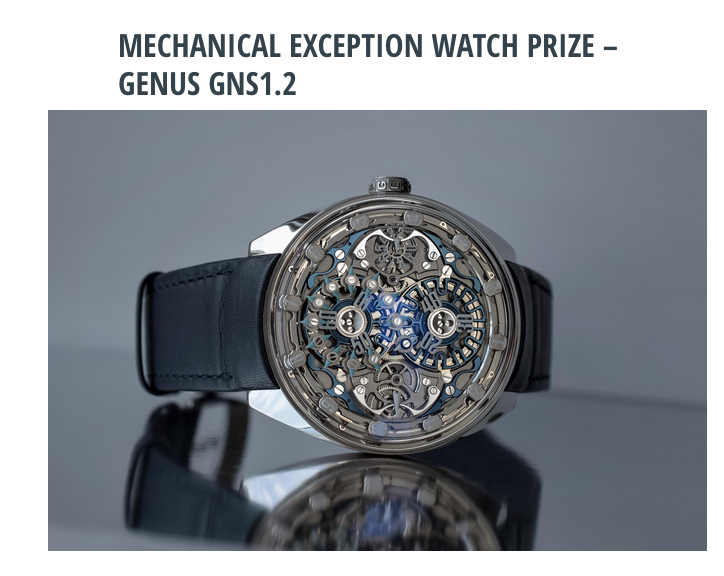 Here we talk about watches featuring a special mechanism, such as an innovative or sophisticated display, an automaton, a striking or any other acoustic function, a belt-driven movement or any other original and/or exceptional horological concept. This year, the GPHG congratulates a newcomer, the first watch from a brand founded very recently; Genus. This watch features a complex indication of the time, where a mechanical “centipede” (the brand calls this free-circulating element “Genus”) crawls over and around two 30-minute circular indicators. 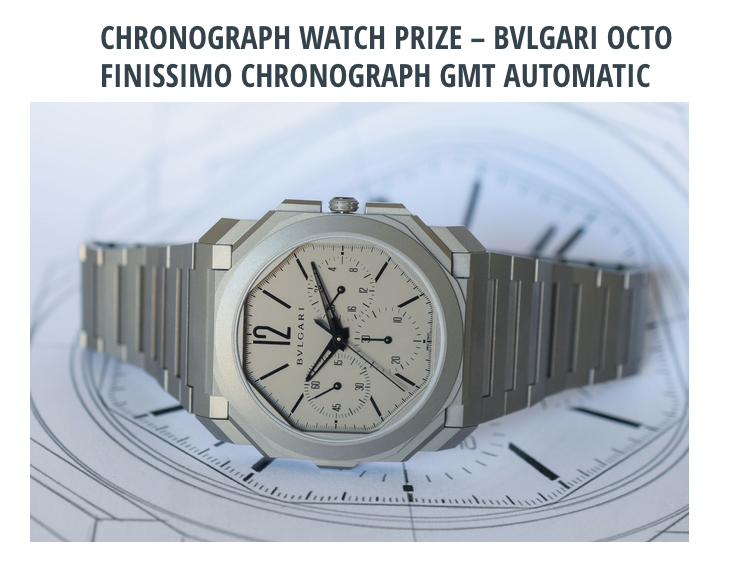 As for the best chronograph of 2019, it is a well-deserved prize for Bvlgari with its extremely impressive new chronograph complication in its series of ultra-thin watches, the Octo Finissimo. Being the thinnest chronograph movement and watch ever created, and in addition to that with automatic winding and a GMT complication, it is a massive achievement for the brand. 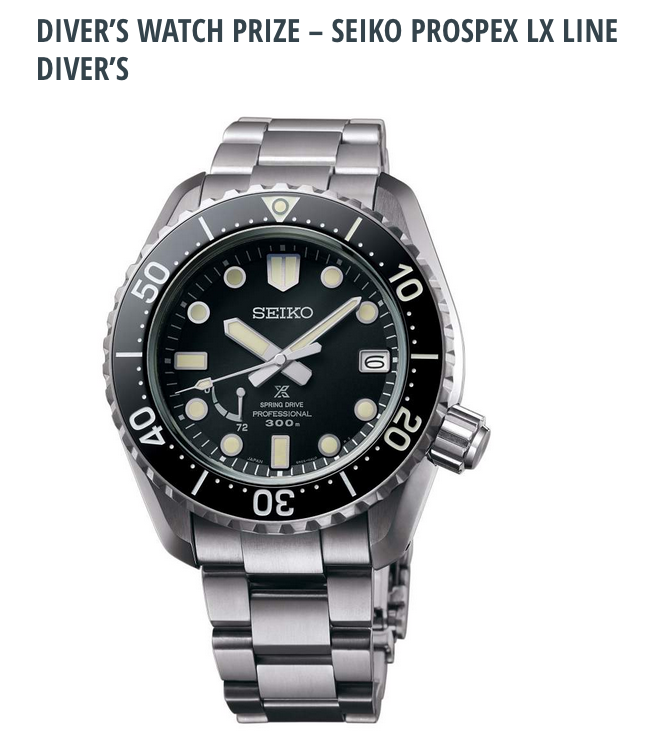 For this category of watches “linked to the world of diving, whose functions, materials and design are suited to this activity”, who better than Seiko, one of the masters of the genre, to win the prize? The GPHG 2019 rewards the new Prospex LX Line Diver’s, an instrument-like piece with Seiko’s innovative movement inside, the Spring Drive technology. 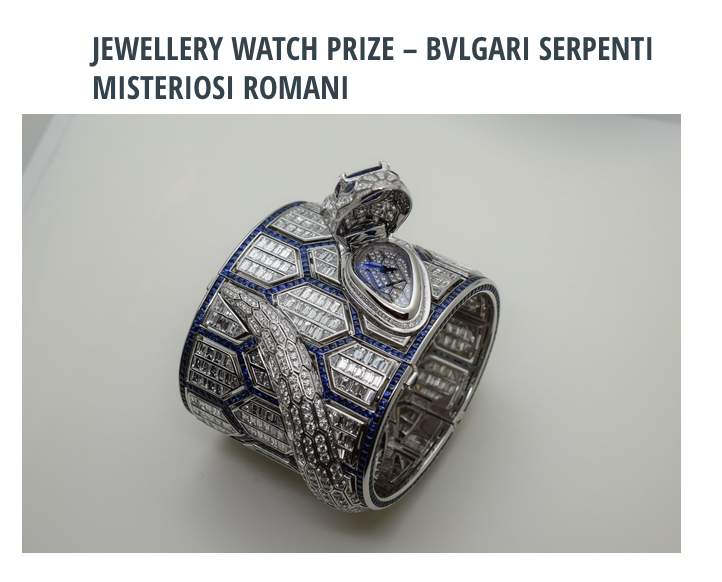 Regarding watches demonstrating exceptional mastery of the art of jewellery and gem-setting, the GPHG 2019 prize goes to Bvlgari with its superb cuff, the Serpenti Misteriosi Romani. 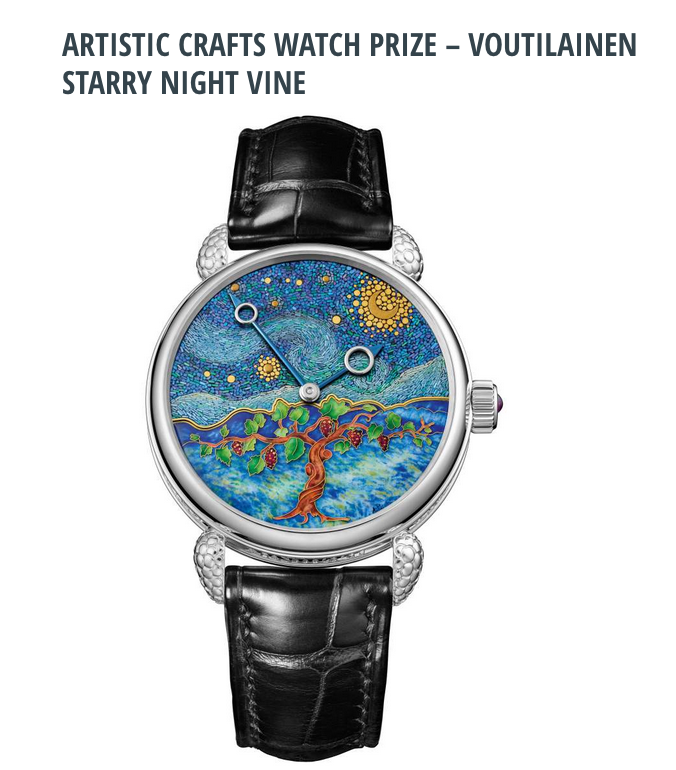 The second prize for Kari Voutilainen, with the Starry Night Vine (inspired by Van Gogh), in the Artistic Craft category – Watches demonstrating exceptional mastery of one or several artistic techniques such as enamelling, lacquering, engraving, guilloché (engine-turning), skeleton-working, etc. 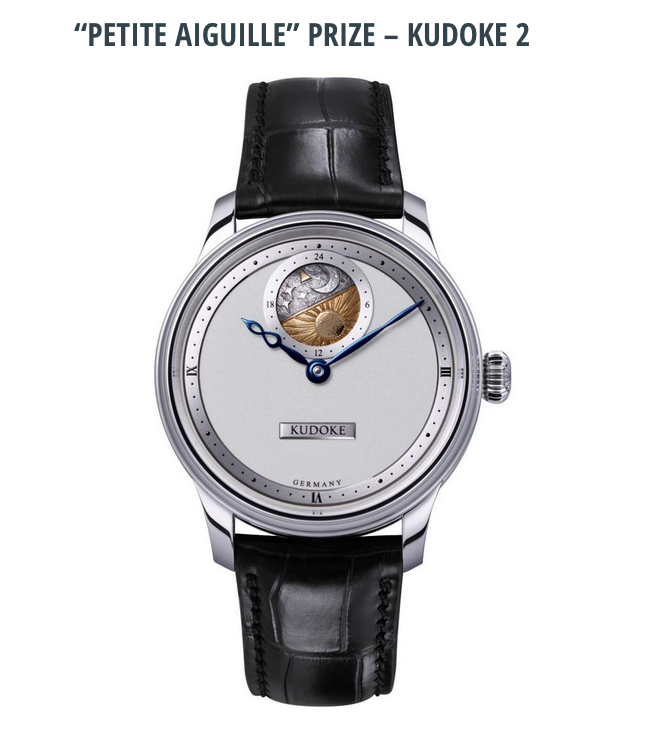 For the Petite Aiguille category, meaning watches with a retail price between CHF 4,000 and CHF 10,000, the GPHG 2019 prize goes to a small, independent watchmaker named Kudoke, known to produce rather impressive watches with multiple hand-finished parts on the movement side but still with a very discreet and elegant design. 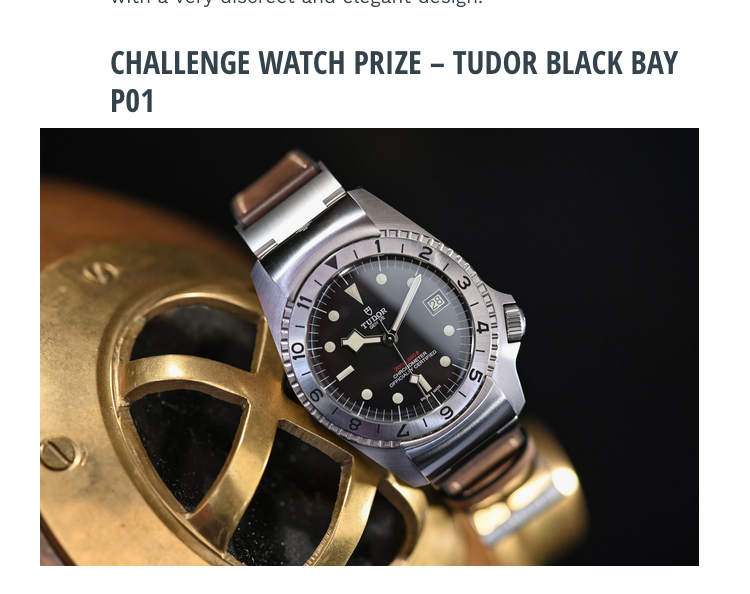 For the “Challenge Prize”, meaning watches with a retail price under CHF 4,000, the award goes to Tudor with the rather controversial and bold (to say the least) Black Bay P01, which is reviewed here. 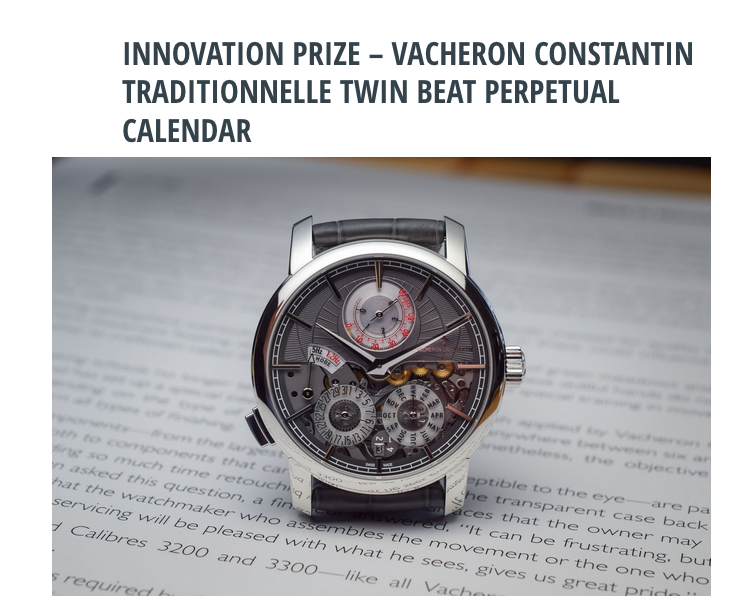 This prize rewards the best watch, presented in one of the fourteen categories, that offers an innovative vision of time measurement (in terms of technique, design, materials, etc.) and opens up new development pathways for the art of watchmaking. This prize is discretionary and the jury will decide whether there are grounds for awarding it in 2019.

The award goes to the VC Traditionnelle Twin Beat Perpetual Calendar, a watch with a perpetual calendar function that features not one but two regulating organs, which can be switched by simply pressing a button on the side of the case. This way, it can store up to 65 days of power reserve almost eliminating the need to adjust the QP function. Impressive technology – and one we almost chose here as the Aiguille d’Or at MONOCHROME…

This prize rewards the best watch, presented in one of the fourteen categories, which features a non-conformist, offbeat approach to watchmaking. It is intended to foster creative audacity. This prize is discretionary and the jury will decide whether there are grounds for awarding it in 2019.

For this special prize, the GPHG 2019 awards an impressive time-machine, based on an atomic clock and a watch, working together as a sympathetic clock. The Urwerk AMC is a watchmaker’s dream, totally unreasonable but no less fascinating. 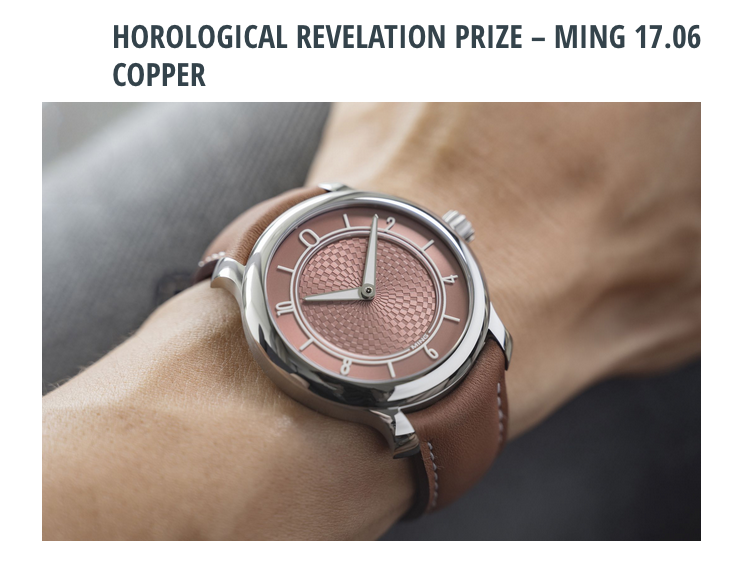 This prize rewards a watch, created by a young brand (less than ten years of existence since its first model was commercialised) and entered in one of the fourteen categories. As such, MING watches is a great example of a newcomer in the watch industry that managed to create its own style, with great-looking watches. 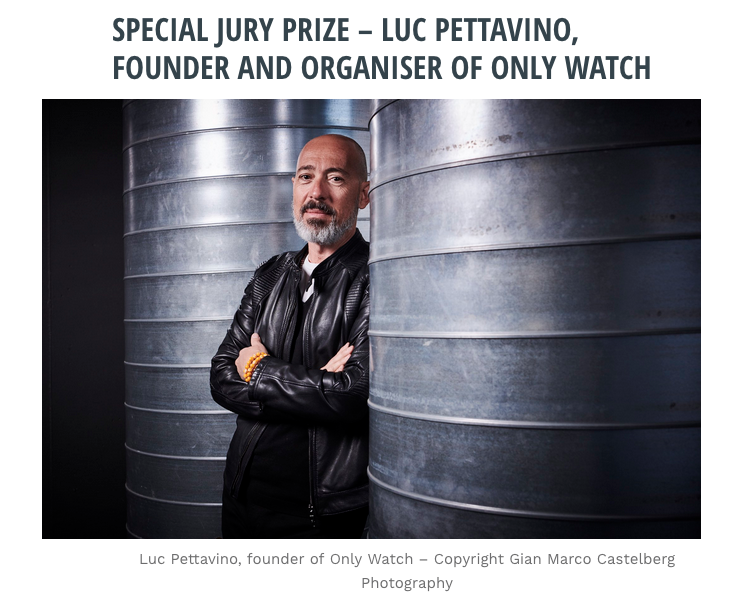 This prize rewards a personality, institution or initiative that has played a fundamental role in promoting high-quality watchmaking. It cannot be awarded to a watch, nor to a brand as such. As the founder of the charity Only Watch, Luc Pettavino has done a tremendous job with multiple watch brands, and as such deserves this special jury prize!

Only Watch is a biennial fundraiser for research on muscular dystrophy – Association Monégasque Contre les Myopathies (AMM). Organized under the patronage of HSH Albert II de Monaco, the watches of the 8th edition will be auctioned by Christie’s on Saturday 9 November 2019. More details at www.onlywatch.com.