For those who didn’t attend the GPHG 2014 awards ceremony or who missed the live stream on WorldTempus, during which the choices of the jury were succinctly explained to the audience, here is a prize-by-prize summary. 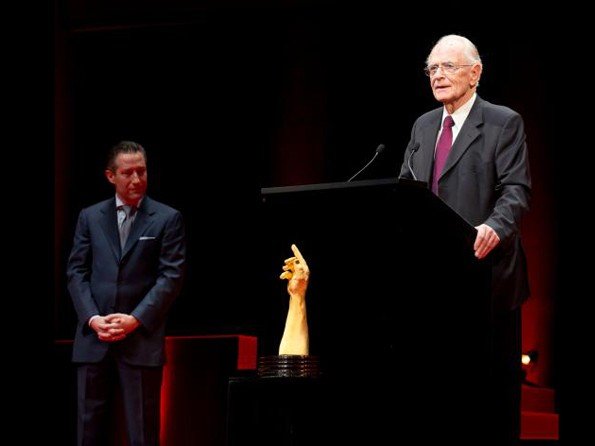 Men’s watch prize:  Urban Jürgensen & Sonner - Central Second
This watch is the perfect miniaturisation of a marine chronometer. Urban Jürgensen has managed to adapt, for the first time, a detent escapement for a wristwatch. The wearer can see this in the centre seconds hand, which advances by thirds of a second. The jury was also impressed by its classic and timeless design and the magnificent hand engine-turned dial.

Sports watch prize:  Zenith - El Primero Lightweight
Carbon fibre, titanium, silicon, aluminium… Zenith chose to create a sports watch using materials from aeronautics. The result is an ultralight, robust and efficient chronograph. It can easily be worn for any sporting activity and is a showcase for the brand’s timekeeping know-how. El Primero has been a success ever since its launch nearly fifty years ago.

Chronograph prize:  De Bethune - DB29 Maxichrono Tourbillon
Imagine a chronograph with hour and minute counters but without any subsidiary dials… DeBethune made one by placing all the hands – five in total - at the centre of this watch. The purity of its design was carried through with the use of a monopusher. It has an exemplary level of finishing that shows off its tourbillon escapement in silicon and titanium.

Petite Aiguille prize: Seiko - Grand Seiko Hi-Beat 36000 GMT
This the jury wanted to award this prize to Seiko for the overall quality of this watch, which proves that you do not need to be on the Forbes list in order to buy a quality timepiece. This choice is also an affirmation of the first item in the competition regulations, which opens the competition up to all watch brands with no distinction as to their origins.

Women’s watch prize:  Blancpain - Women Off-centred Hour
It’s the perfect combination of elegance, romanticism and a playful spirit, which is underscored by the way the diamonds are arranged on the dial but also by the graduated setting on the bezel. The jury also appreciated the fact that Blancpain has fully understood that ladies are increasingly interested in mechanical issues, since it is fitted with an in-house movement with a high level of finishing and considered aesthetics.

Women’s mechanical prize:  Christophe Claret - Margot
For the jury, there is nothing more beautiful than high end watchmaking… except love! Christophe Claret has combined the two perfectly. A press on the button of this watch causes the daisy to start losing its petals at random: a little, a lot, passionately, madly… the jury chose.

Jewellery watch prize:  Bulgari - Diva High Jewellery Emeralds
Bulgari has a long tradition of supplying royal family and Hollywood stars.  The Diva Haute Joaillerie Emeraudes is a showcase for this know-how. The jury appreciate not only the quality of the stones but also the extraordinary setting work. The male jurors looked at the watch in a rational way, while the ladies brought the emotion. It’s a watch that works on both levels.

Artistic crafts prize:  Voutilainen - Hisui
This is a piece designed and assembled by the master himself. A spectacular movement, an astonishing dial that bears a work of art in lacquer that required over a thousand hours of work, a platinum case with a timeless design. In short, all the watchmaking arts brought together by one of the greatest horological craftsmen of our era.

Calendar watch prize:  A. Lange & Söhne - Richard Lange Perpetual Calendar “Terraluna”
The jury fell in love with the “Terraluna” because this watch has a very discreet perpetual calendar and a highly visual regulator, all with an unparalleled quality that pays tribute to the work of the artisans in Saxony. As if this was not enough, on the back, the watch has an exceptional orbital moon phase display: a first on a wristwatch.

Tourbillon prize:  Grönefeld - Parallax Tourbillon
The jury adored this watch not only because of its independent spirit but also because of its extraordinary finishing. The watch displays a flying tourbillon of exceptional beauty. It is proof that, even in a market deemed saturated, it is possible to present unique and innovative products. The Grönefeld brothers have proved that such a tour de force is possible not just in Switzerland but in the Netherlands, too.

Striking watch prize:  Hublot - Classic Fusion Cathedral Tourbillon Minute Repeater
The jury was impressed by the ease with which Hublot combined the minute repeater mechanism with a titanium case that remains true to the brand’s DNA. The watch’s slenderness makes it easy to wear and the sound is transmitted harmoniously by the cathedral gongs. The easily activated minute repeater slide is also worthy of note.

Mechanical Exception prize:  Urwerk - EMC
Incredible! This watch combines a mechanical movement with a module to analyse the precision of its rate. Just think: you only wind it every three days but you can also wind a lever on the right-hand side of the case as often as you want. A display on the top left of the dial then allows you to see whether the watch is running fast or slow and you can adjust the rate yourself by turning a special screw on the movement.

“Revival” prize:  Omega - Speedmaster “Dark Side of the Moon”
Ever since it landed on the moon, the Speedmaster has without doubt been one of the most iconic watches in the history of watchmaking. And this is why the jury voted for it. Nothing could be more difficult than modernising and rethinking such a mythical design. With a ceramic case, a dial in black zirconium and a co-axial escapement movement, it is as classic today as it was back in 1969 on the moon.

Innovation prize:  Urwerk - EMC
Each year, the members of the jury think that they have already seen everything or that everything has now been invented. Astonished by the concept of Urwerk, which incorporates a mechanical movement coupled with a module to analyse the precision of its rate, as well as mechanical and electronic winding, the jury wanted to award this watch once again.

Aiguille d’Or :  Breguet - Classique Chronométrie
A high-frequency movement fitted with a balance wheel with magnetic pivots is allied with an elegant design that is the perfect embodiment of Breguet’s classicism. These are the arguments that led the jury to award the Grand Prix to this watch. The Breguet Classique Chronométrie incorporates new technology that will mark the history of the brand and of watchmaking in general. It is a beautiful watch, which, according to collectors, will make its mark while remaining affordable.

Jury’s special prize: Walter Lange
He has high-end watchmaking in his blood and his contribution is seen if you look back into history. He is a man of the century, of the 20th Century. He lost everything. The war destroyed his family business and then the communist regime confiscated his factory. But at the age of 66, at a time when life offers other promises, he started again, setting everything back up and patiently giving hope to a devastated region by creating jobs, growth and a future. Today he creates some of the finest high-end timepieces on market.