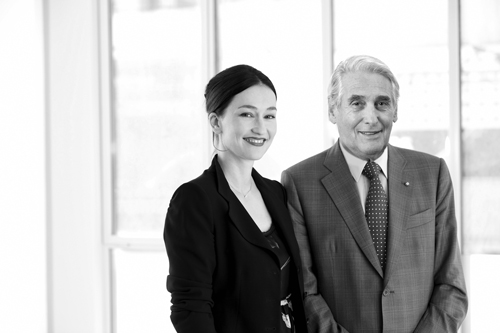 Carine Maillard and Carlo Lamprecht, Director and President of the GPHG foundation

Designed to celebrate the 12th Art, the Grand Prix d’Horlogerie de Genève, more often known as the GPHG, annually highlights and recognises the excellence of contemporary watchmaking creations. It enables an international audience to follow the evolution of this art through a competition culminating in a prize-giving ceremony, which this year will be held on October 31st at the Grand Théâtre de Genève.

This 14th edition of the GPHG registers a record participation with representation from all the major watchmaking groups as well as a number of independent companies. Small and large brands alike will confront their creations in a spirit of harmony. Once again, we would like to take this opportunity of thanking all the brands that have accepted this challenge to compete with each other. Taking part means making a contribution to strengthening the prestige and renown of the entire watchmaking sector as well as demonstrating the extraordinary vitality of this industry – a flagship of the Swiss economy that has proven itself capable of reinventing itself year after year, while perpetuating the values of excellence, innovation and exceptional know-how.

The watches preselected by our 2014 jury are presented in the pages of this catalogue (pages 14-37). In order to pay tribute to the diversity of the various watchmaking creations, this year we have opened the competition in 12 categories, and notably in five new Tourbillon, Calendar, Chronograph, Striking and Mechanical Exception categories. In addition to the prizes which correspond to these categories, awards include the “Aiguille d’Or” Grand Prix, the Innovation Watch Prize, the Horological Revelation Prize which rewards a creation by a youthful brand, the Revival Prize, which recognises the best contemporary reinterpretation of an iconic model, as well as the Special Jury Prize and the Public Prize.

The 2014 jury is presented in the following pages (pages 5-8), along with the programme for the travelling exhibition (pages 38-40) which provides an annual opportunity for the international public to discover and admire the most beautiful watchmaking creations of the year pre-selected by the jury or GPHG laureates, and brought together for this once off occasion.

Watch enthusiasts are invited to vote for the Public Prize by selecting their favourite model from among the 72 pre-selected watches competing in the GPHG. Voters automatically take part in the draw to win a watch gifted this year by Girard-Perregaux, winner of the “Aiguille d’Or” Grand Prix 2013. To vote, just consult the page showing the pre-selected watches on the official GPHG website: gphg.org. Visitors to the various exhibition locations will also be able to vote via ballot papers. The name of the winner will be drawn at random and announced on-stage at the GPHG awards ceremony to be held in the Grand Théâtre de Genève on October 31st 2014, in the presence of Mr Johann Schneider-Amman, Federal Councillor, whose participation will be a reminder of the Swiss government’s support for the Swiss watch industry.

As every year, connoisseurs and enthusiasts around the world will be able to watch the ceremony live on our website gphg.org and on euronews.com, worldtempus.com, hodinkee.com and the tv channel Léman Bleu.

In conclusion, we would like to thank the State and the City of Geneva for their precious contribution as well as all our partners - whose logos appear below - who share the values associated with watchmaking and who support us in our vocation of celebrating the 12th Art.